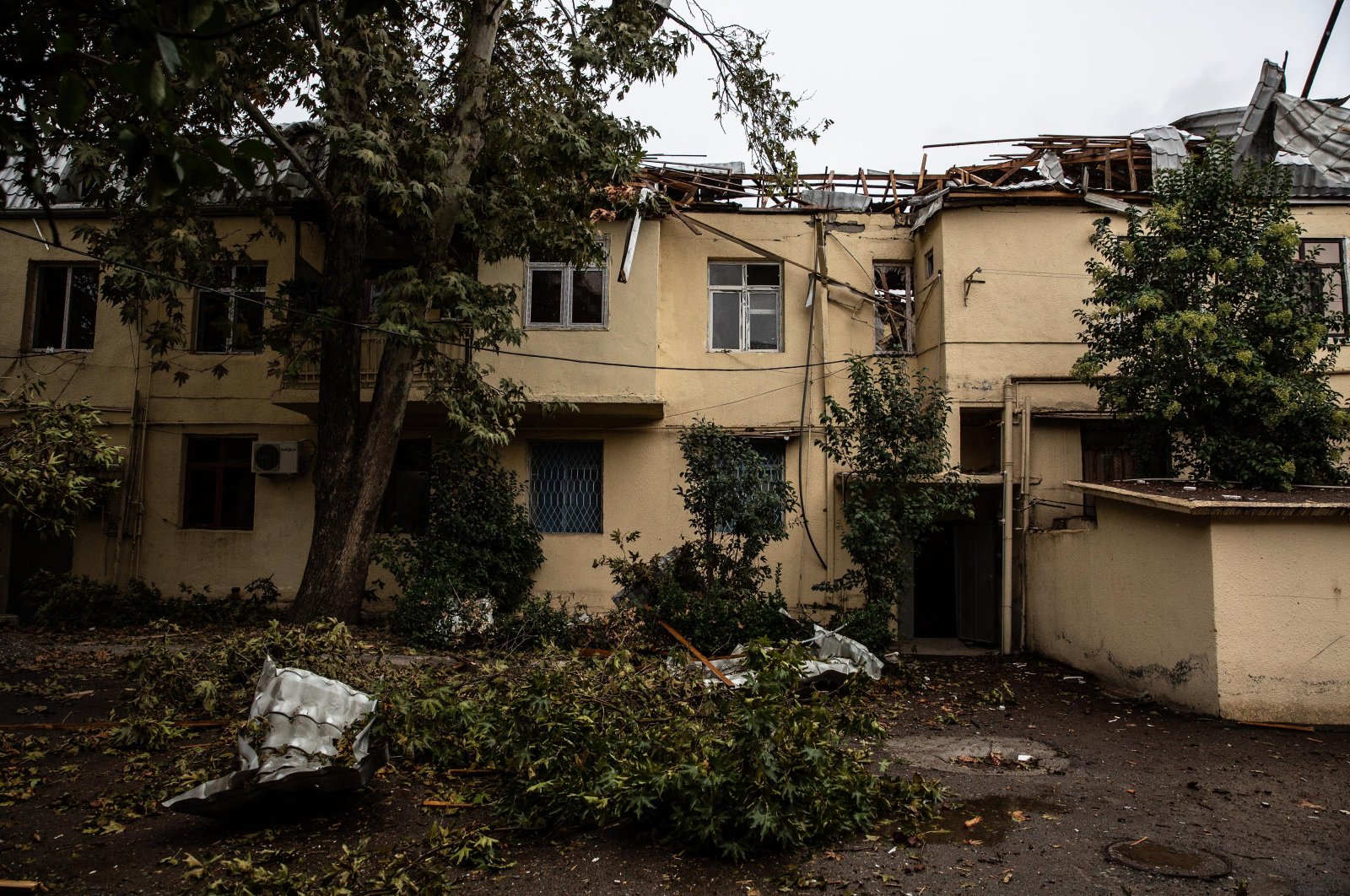 A view of a building and trees damaged by Armenian shelling toward Azerbaijani civilians, in the Azerbaijani district of Tartar, Oct. 7, 2020. (AA Photo)
by Ayaz Museyibov
Oct 08, 2020 12:05 am

The war initiated by Armenia against Azerbaijan is deepening the current economic recession in Armenia and destroying all available resources. According to the official data provided by the Azerbaijani Defense Ministry, during the war started by Armenia against Azerbaijan, from the morning hours of Sept. 27 up to Sept. 30, the Azerbaijani Armed Forces destroyed up to 200 tanks and other armored vehicles, 228 artillery pieces, multiple rocket launch systems and mortars, 30 air defense means, six command-control and command-observation posts, five ammunition depots, over 110 vehicles and one S-300 anti-aircraft missile system.

It was also reported that two Su-25 aircrafts belonging to Armenia exploded after crashing into a mountain. The cost of the destroyed S-300 systems varies from $115 million (TL 905.6 million) to $160 million, depending on the type.

According to the military-analytical publication “Deagel,” Armenia’s weapon arsenal contains the S-300 PMU1 mobile multichannel air defense missile system. The cost of such modification is about $160 million, and the cost of one missile is more than $1 million.

The Su-25 is priced at $11 million. Additionally, the total cost of up to 200 T-72 tanks and their various modifications destroyed by the Azerbaijani army is estimated at about $300 million. Military experts note that military complexes suffered the most damage out of Armenia's destroyed air defense systems.

The cost of one such weapon varies between $20 million-$25 million, and the total cost of just the enemy's destroyed vehicles over the past four days is more than $2 million. It seems our heroic Azerbaijani army has managed to destroy $1.2 billion worth of military equipment and ammunition within four days.

According to Armenia’s Ministry of Finance, the amount of military expenditures in the state budget for 2020 is about $634 million, and according to the World Bank, in 2019, the country's gross domestic product (GDP) was around $13 billion.

As claimed by the U.S. Central Intelligence Agency, the country spends about 5% of its GDP annually on military expenditures. Calculations by the influential military-analytical center Global FirePower demonstrate that Armenia's total military budget is estimated at $1.385 billion. In just four days, the Azerbaijani army destroyed materials worth double the budget Armenia allocated for its own military.

Considering the above-mentioned, it is evident Armenia cannot sustain the conflict using this level of resources. The fact of the matter is that the new economic conditions created by the pandemic have already aggravated the economic situation in the country.

From this standpoint, the country does not have the power to wage a resource war, and the country's economy in the second quarter of this year experienced the sharpest decline since 2009 (13.7%).

According to the Statistics Committee, the country's economy decreased by 5.7% compared with the beginning of the year, and as of July 2020, there is a trade deficit equal to $1 billion with the fiscal budget deficit standing at around 5% of the GDP. The service sector, which is considered the strongest driver of Armenia's economic growth, has already shrunk by 10% due to the pandemic. It is not difficult to predict that in conditions of war, the service and tourism sectors will collapse in Armenia leading to exacerbation of economic indicators.

According to the Central Bank of Armenia, currently, the country's official reserve assets amount to $2.6 billion, and in just four days the country gained “additional costs” worth 50% of the country's assets. Therefore, the borrowing policy the Armenian government could previously rely on will no longer work.

As reported by the country’s Ministry of Finance, Armenia seems to be sinking further into debt, and in January-August 2020, budget revenues decreased by 6% compared with last year.

The country also has a foreign debt approaching $6.1 billion. Before the war, the Ministry of Finance forecast that public debt would increase to 60% of GDP in 2020, and according to the accepted international methodology, a figure higher than 40% is considered a threat to the country's financial and economic security.

According to the official forecasts of the Armenian government, Armenia will not get out of this debt swamp until 2025 and will have a public debt of at least 50% of GDP.

On the other hand, the information by the Statistics Committee published on Aug. 31 shows that more than 76% of the country's public debt is denominated in foreign currency, mainly in U.S. dollars (about 40%) and accounts for about 20% of total debt in floating currency.

In the face of future instability, the country's debt service costs will surely increase. Currently, the total amount of foreign loans borrowed by this country equals $4.6 billion with the main share in the total amount belonging to investors from several international organizations and countries.

Here, we see once again that the debt structure is not diversified and that the investments in this direction are expected to be repatriated. Today we can see not only Armenia's military but also its economic security are endangered because of its destructive and unreasonable policies.

Statistic economic indicators demonstrate that the difficult economic situation in Armenia will not allow the country to wage longlasting war with Azerbaijan and that the country’s economy is not ready for long-term tensions and resource wars.

Putting statistics aside, the truth is on the side of the Azerbaijani people, and the day they will see their enemies collapse in the face of national unity is not far away.

*Head of the Strategic Development and Planning Department at Azerbaijan's Center for Analysis of Economic Reforms and Communication, Ph.D. candidate at Azerbaijan State University of Economics

*Head of the Strategic Development and Planning Department at Azerbaijan's Center for Analysis of Economic Reforms and Communication, Ph.D. candidate at Azerbaijan State University of Economics