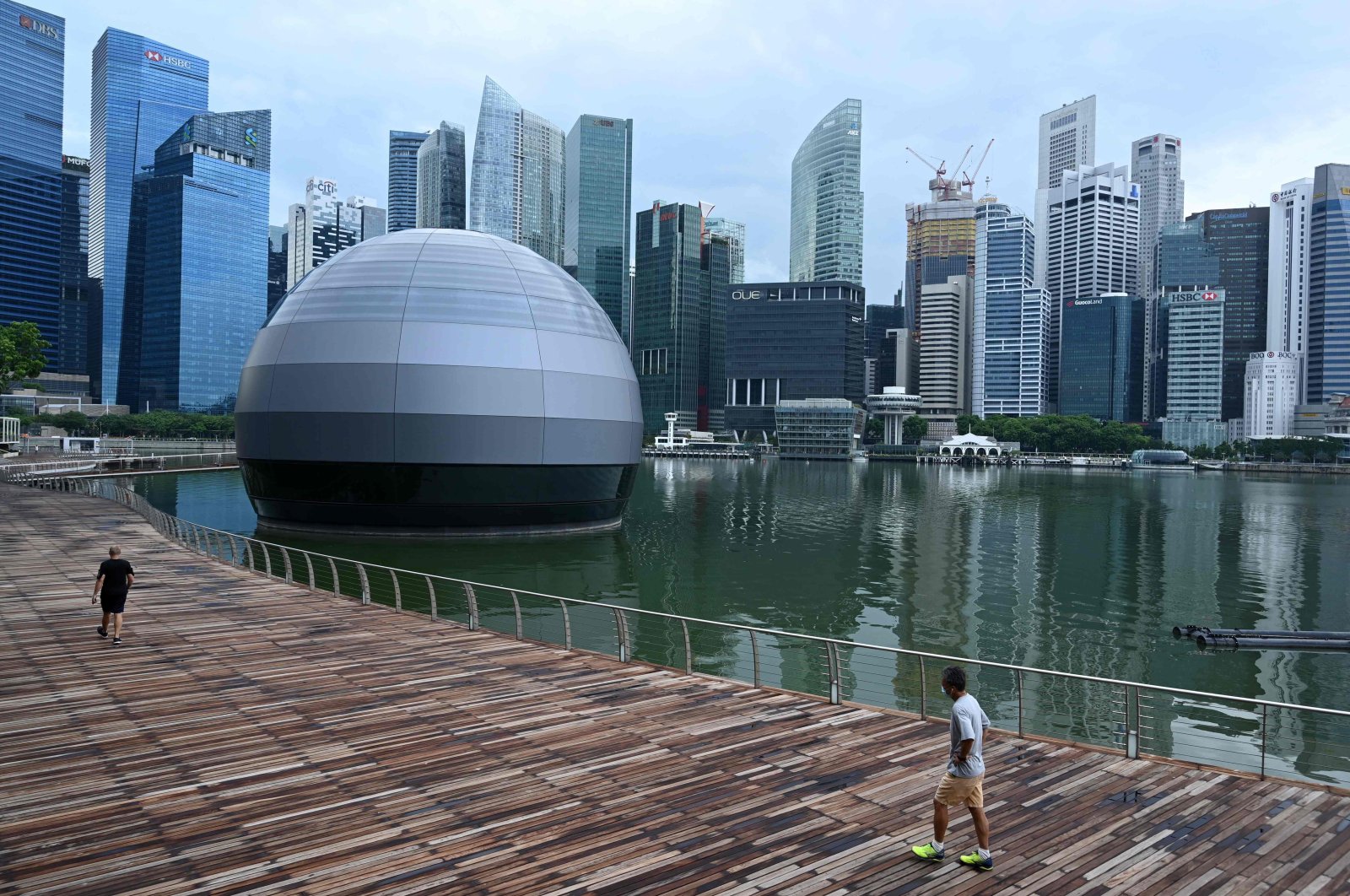 People wearing face masks as a preventive measure against the spread of the COVID-19 outbreak walk along the promenade at Marina Bay in Singapore, May 4, 2020. (AFP Photo)
by Muhammet Ali Güler May 08, 2020 12:05 am
RECOMMENDED

The Association of Southeast Asian Nations (ASEAN) has seen over 40,000 cases of COVID-19 as of April 28, with new cases totaling 528 and the overall recoveries numbering a little over 10,000. The outbreak of COVID-19 has seen social, economic and political consequences across the globe with many nations taking all necessary steps to counter the pandemic in line with their internal situation. In ASEAN, governments mitigated the outbreak through various steps such as encouraging nationwide social distancing; declaring states of emergency; suspending activities, gatherings and celebrations; mandating mask-wearing; extensive testing; location tracking; full or partial lockdowns; travel restrictions and border closures.

Furthermore, many countries have announced economic stimulus packages to minimize the impact of the pandemic on their economies. Across the globe, millions of people have already lost their jobs while millions more may face the same fate amid this global pandemic if the mitigation measures last for a longer period of time. According to the Asian Development Bank (ADB), this number could reach up to 70 million in Asia. According to the International Labor Organization, the youth unemployment rate is expected to be higher in the coming years with the rate increasing to 15.6% in Indonesia, 10.5% in Malaysia, about 7.5% in the Philippines, 4.5% in Singapore and 5.6% in Thailand.

Initially, some countries underestimated the pandemic and so were slow to react. Chronic underreporting was also a problem that caused challenges due to the increase in demand for protective equipment.

In Indonesia, the first case was recorded on March 2 with the current total exceeding 9,500. About 50 medical workers have lost their lives and new daily cases stand at 415, with nearly 800 dead in total. The total number of people who have recovered is above 1,200. President Joko Widodo asked relevant authorities to be transparent about the pandemic, especially since COVID-19 was not initially seen as something dangerous. The biggest economy in ASEAN, Indonesia announced a number of emergency relief packages that amounted to a little over $30 billion on Feb. 25 and March 13, 18 and 31. However, to prevent its economy from falling into a recession, this figure may rise to $60 billion. All in all, more than 5 million people could lose their jobs in Indonesia.

Malaysia has seen 5,851 cases of COVID-19 and 100 deaths. On the other hand, the number of cases that have recovered exceeds 4,000. In addition to an initial economic relief package amounting to about $5 billion on Feb. 27, a second economic package, valued at $57 billion, passed on March 27. Recently, Malaysia announced a third economic relief package totaling $2.5 billion. The recent relief package brings the total amount of economic relief to about $65 billion. To further mitigate the spread of COVID-19 in Malaysia, the Movement Control Order (MCO) was extended to May 12 while letting essential sectors such as glove and mask producers keep half of their workforce with necessary measures in place. About 2 million people could lose their jobs in Malaysia.

The Philippines has seen around 8,000 cases with 140 new daily cases. The current death toll is over 500, while about 1,000 patients have recovered from the disease. The government announced about $30 billion in economic relief packages. In the meantime, the government also announced a partial lockdown affecting around 60 million people out of a population of 106 million, which will end April 30.

Singapore has the highest number of cases with nearly 15,000, including over 500 new cases and a total death toll of 14. About 1,000 people have recovered. Currently, there are ongoing questions about the living conditions of foreign workers since many believe that poor living conditions could cause another spike of infections in the city-state. Singapore announced a couple of economic relief packages with a total value of $45 billion. Authorities in Singapore have enabled a partial lockdown until the first week of June to control the increasing number of cases.

In Vietnam, Brunei, Laos and Cambodia, the total number of cases is around 700, while nearly 500 people have recovered. Recently, both Vietnam and Myanmar announced economic stimulus packages worth around $1.2 billion and $70 million respectively. In Thailand, the total case number is about 2,811, with 19 new daily cases, and the death toll stands at 50. Over 2,500 people have recovered in the country, while the total number of cases is nearly 3,000. Like many other countries in ASEAN, Thailand also announced an economic relief package worth around $80 billion.

According to sources such as the International Monetary Fund (IMF), the World Bank, Bank Negara Malaysia and OCBC Bank, Malaysia, Singapore and Thailand may fall into recession. On the other side, the Philippines and Indonesia could see growth of 0.6% and 0.5%, respectively, in 2020, according to the IMF, while the World Bank estimates growth of 0.5% for the Philippines and of 3.5% for Indonesia in 2020 as a worst-case scenario.

In addition to trade disputes between the United States and China, COVID-19 has created another standoff between these two countries with some individuals and groups drawing the global attention by claiming China should pay for its handing of the COVID-19 outbreak. There could very well be the formation of a bloc of countries demanding compensation from China. During this harsh confrontation, some companies may take concrete steps against China; for example, they could move their operations out of China and relocate to other alternative countries. Companies such as Sharp and Lenovo already have production lines in Vietnam while other ASEAN nations such as Indonesia, Malaysia and Thailand are pioneering countries that could serve as alternative sites for production.

Therefore, smaller nations may draw more investors from richer nations. The post-COVID-19 world offers better chances to those countries that dealt with COVID-19 faster. These countries may receive more investments from Europe, especially since the European Union trade ministers already realized the importance of a strong supply chain during their meeting on April 16. It should be noted that this meeting could very well bring about some changes in the coming years.

For right now, though, Vietnam and Cambodia are in the spotlight amid the COVID-19 outbreak. Vietnam handed over a million medical masks to France, Germany, Italy, Spain, the United Kingdom and surrounding countries. This assistance may help shine a light on Hanoi after COVID-19 ends, especially if global brands consider relocating their production lines to ASEAN member states.

As for Cambodia, it allowed the cruise ship MS Westerdam – which was carrying 1,455 passengers and 802 crew – to dock. This move was a good signal that Cambodia is available for any kind of future relations with the West.

The relocation of multinational companies to other ASEAN members was accelerated with the trade war between Washington and Beijing. If the U.S. chooses to test the "weakest" power in the triangle of China, Russia and Iran, this may also be one of the determining factors in a post-COVID-19 in the region and beyond. ASEAN members will not be eager to choose sides between the U.S. and China, but it should be pointed out that Indonesia, Malaysia, Vietnam and Brunei are in direct territorial disputes with China regarding the South China Sea.