Azerbaijan swells with pride on 103rd anniversary of victory 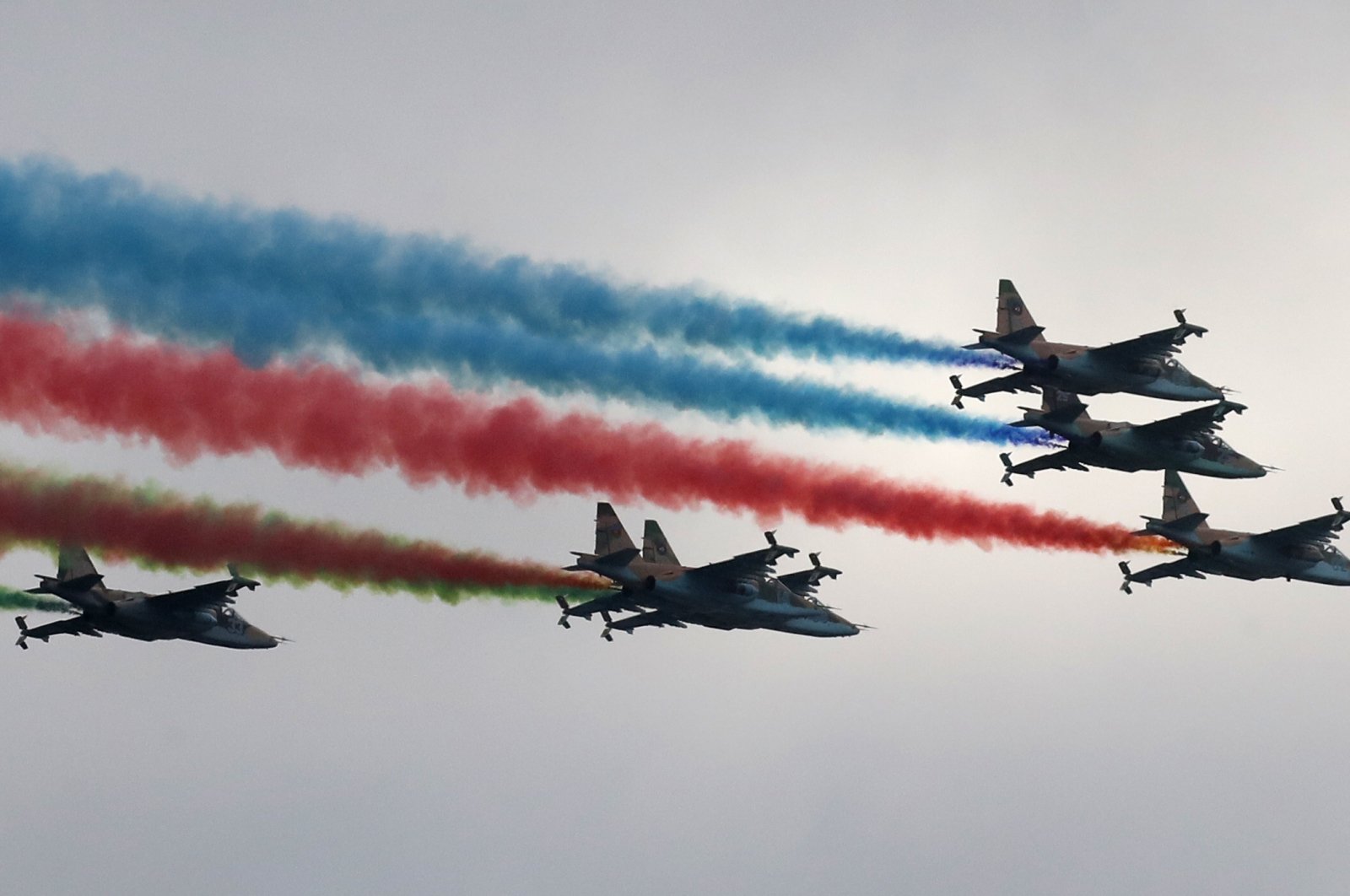 Sukhoi Su-25 jet fighters leave a trail in Azerbaijani national colors during a military parade marking the end of the Nagorno-Karabakh military conflict, Baku, Azerbaijan, Dec. 10, 2020. (Photo by Getty Images)
by Pat Walsh May 28, 2021 12:25 am
RECOMMENDED

Today, Azerbaijanis are commemorating the 103rd anniversary of the Azerbaijan Democratic Republic (ADR). They will celebrate this momentous event in 2021 with greater joy this year, after the liberation of Nagorno-Karabakh and the occupied territories fresh in the minds of the Azerbaijani people.

The Azerbaijan Republic emerged as a result of a unique set of events. In 1917-18 the Azerbaijani people stood together to ensure their survival as a community in a situation of flux that developed in the Southern Caucasus out of the Tsarist Russia's collapse in the Great War. At the end of March 1918, the Azerbaijanis of Baku and other areas had been the victims of horrendous massacres conducted by combined Armenian and Bolshevik forces, in which around 20,000 died.

On May 28, 1918 the Azerbaijan Democratic Republic was proclaimed by Fathali Khan Khoyski, Azerbaijan’s first prime minister. It was decided to allow the ceding of traditional Azerbaijani lands in Erivan to the Armenians so they could establish their own state. It was understood that in return for receiving Erivan the Armenians would give up their claims to Karabakh and Zangezur, so there could be peace. However, the Armenians reneged on the understanding and began attempting to incorporate these regions into Magna Armenia.

The capture of Baku

The Azerbaijani government signed a friendship treaty with Istanbul. A small Ottoman army led by Nuri Pasha was formed and helped construct an Azerbaijani military force which succeeded in fighting off a Bolshevik/Armenian offensive and won further victories to open the road to Baku. The Armenians were bolstered by the arrival of a British force under Gen. Lionel Dunsterville in Baku. The capture of Baku on Sept. 15, 1918, by the combined Ottoman/Azerbaijani army was a most important event. As the Armenians gave up the fight, the British evacuated and on Sept. 15 the city fell to become the capital of the Azerbaijan Republic.

The Ottoman victory was short-lived as later the Armistice of Mudros obliged Ottoman forces to evacuate Azerbaijan. However, Gen. William Thomson, the British governor of Baku, was content to let the Azerbaijan Republic coexist with the British occupation and to run the country on the understanding that the oil fields and infrastructure were under Britain’s control. The British acknowledged that Karabakh and Zangezur were Azerbaijani territory and appointed a Muslim governor there.

The Azerbaijanis decided to use the British presence as an opportunity to build democratic institutions under stable conditions. The leadership of Mehmet Emin Rasulzade, Fatali Khan Khoyski, Nesib Yusifbeyli, Hasan Aghayev, Mehemmedyusif Jafarov and Mammad Hajinski faced many problems in building a state from scratch. An Azerbaijan parliament was established with seats reserved for minorities and ministries were set up to administer education, health, agriculture and the economy. A national bank and currency were established. The British were impressed with the capabilities of the Azerbaijani government and relied heavily on it to administer authority. The ADR became one of only a handful of states in the world to enfranchise women, and the first in the region. When Britain withdrew its military forces from the Caucasus, the Azerbaijan Republic took control over its national territory.

ADR took its case for recognition to the Paris Conference. Its delegation was headed by Ali Marden Topchubashov and Mammad Hasan Hajinski. The ADR was a model of Western-style democracy in a region where such a form of governance proved problematic. The Supreme Council recognized the Democratic Republic of Azerbaijan on Jan. 11, 1920.

However, wider events engulfed Azerbaijan again. The withdrawal of Allied support from the Whites meant that the Bolsheviks got the upper hand in the Russian Civil War and the Red Army moved across the Caucasus. In March 1920, Vladimir Lenin ordered the capture of Baku at all costs.

The Azerbaijani army was suppressing an Armenian insurrection in Karabakh when the Soviet army invaded in April 1920. No aid was forthcoming from the Western powers. A two-front war against Armenians and Russians was impossible for the small Azerbaijani army. The Armenians in their pursuit of expansion disabled the defense of the Southern Caucasus allowing the Soviets to reconquer the region for Russia.

Azerbaijan suffered 70 years of Bolshevik rule before reemerging as an independent nation with the collapse of the Soviet Union, in 1991. Unfortunately, during the break-up of the Soviet Union revanchist Armenian nationalism successfully seized Karabakh and surrounding territories, amounting to nearly 20% of Azerbaijan. Azerbaijan was chaotic with internal conflict rendering effective defense impossible. It was not until a government under Heydar Aliyev was established, late in the war with Armenia, that Azerbaijan began to act as a functional state. But by then the war was lost and 800,000 Azerbaijanis were displaced by the Armenians.

The new Azerbaijan Republic under Aliyev, and then his son, Ilham Aliyev, built an economy and army aimed at liberating these occupied territories. When long drawn-out negotiations failed in the face of Armenian intransigence and provocations were launched by the Pashinian government it was clear only force could settle the issue. In Autumn 2020 the 44-day war saw the Azerbaijan army comprehensively defeat the Armenians and liberate the bulk of Azerbaijan’s national territories. Turkey was of great moral and material assistance to Azerbaijan, as in 1918.

This year, on May 28, the Azerbaijan Republic is celebrating with great pride the nation state that was established 103 years ago, and looks forward to the rejuvenation of the newly liberated territories.