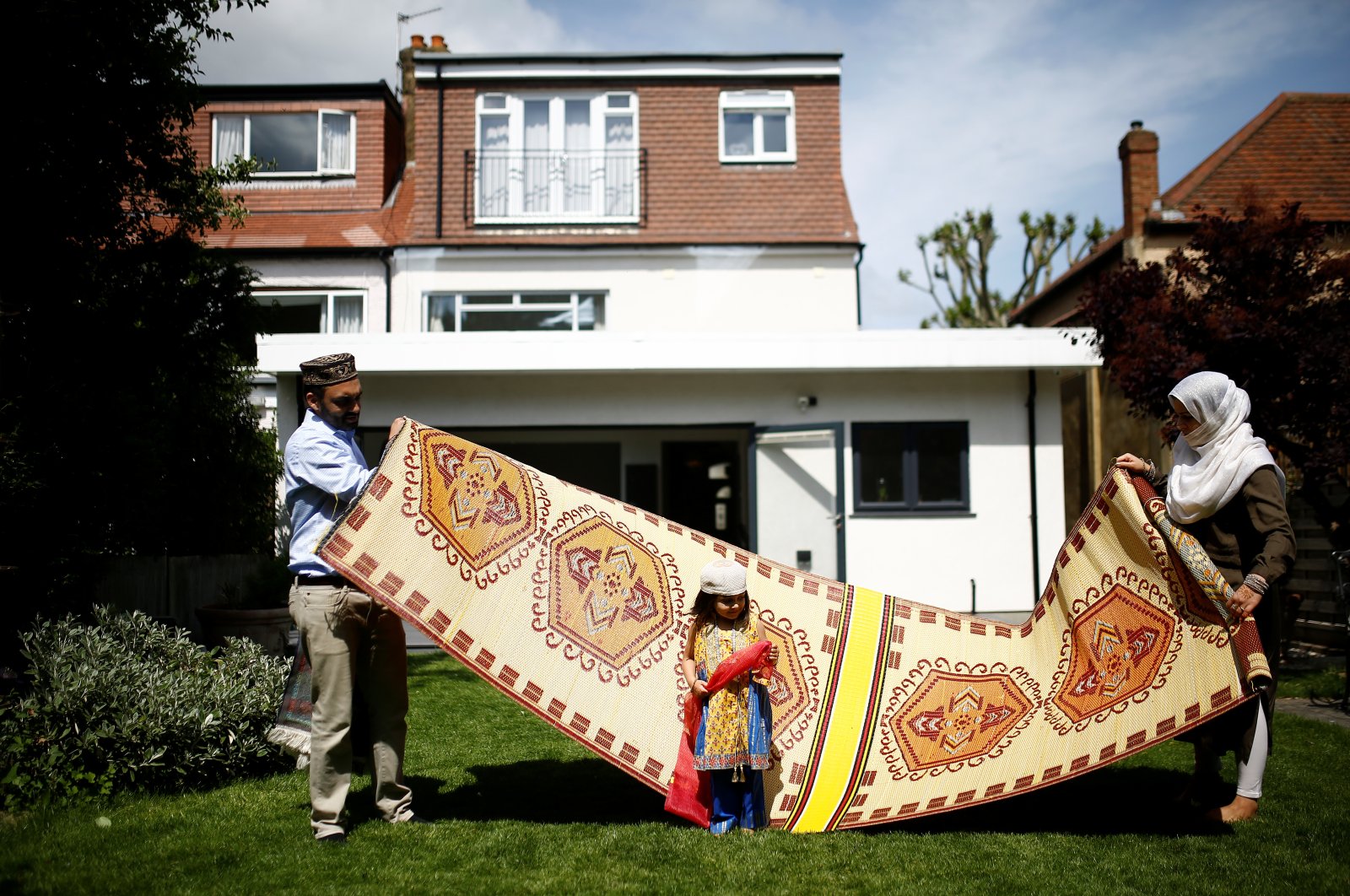 A Muslim family sets up prayer mats in their home garden for the Eid al-Fitr prayers to mark the end of the month of Ramadan following the outbreak of the coronavirus in Surbiton, London, U.K., May 24, 2020. (Reuters Photo)
by Serkan Aydın Jun 19, 2020 12:05 am
RECOMMENDED

Rumors and conspiracy theories lavishly blossom in an era of low confidence and low trust. It is therefore not surprising that a myriad of stories has mushroomed regarding the COVID-19 pandemic on account of the lack of any authoritative scientific consensus on the coronavirus, its spread or its containment, or on the long-term social and economic impacts of the pandemic.

As the COVID-19 crisis worsens, a global misinformation pandemic now reigns. There have been bizarre yet interesting stories that have been circulating as to how COVID-19 originated. Here are some top ones: It was suggested that the 5G network activates the virus, that the U.S. army imported COVID-19 into China, that the pandemic is being manipulated by the deep state to undermine Trump, that the pandemic is a plot and hoax controlled by big pharma, that the virus is a biological weapon released intentionally by the Chinese, that the virus escaped from a Chinese laboratory, and that Bill Gates is using it as cover to launch a global surveillance regime. While some might ignore these stories as having little effect on real-world behavior, recent events, such as the destruction of property, racially fueled attacks against Asian Americans and demonstrations espousing resistance to public health orders, have indicated that such conspiracy theories might yield harmful consequences.

Admittedly, the virus has fueled anti-Chinese sentiment, especially in the U.S. and Europe. The media’s chief focus has thus far been Sinophobia, however, the spread of ambiguous conspiracy theories during these troubled times has also heightened the intolerance and discrimination against Muslim communities.

The coronavirus that is infecting people in almost every country and territory on Earth has been weaponized by the far-right to attack Islam and Muslims, especially in the U.K. In a recent study conducted by Imran Awan, a professor of criminology at Birmingham City University, and Roxana Khan-Williams, a support and development officer at the anti-racism group HOPE not Hate, concluded that "Islamophobic online ‘cyber hubs’ were being formed which linked Muslims to the spread of COVID-19 in the form of spreading anti-Muslim memes and sharing fake news stories." The upsurge of fake news and its spread on social media has resulted in an increase in the already existing myths produced by the far-right. While the world is in adamant combat against the pandemic, hate speech related to the virus is spreading online almost as fast as the virus itself.

The far-right activists in the U.K. stigmatize Islam and Muslims as the spreaders of the virus, as this would fit well within the broader-known far-right ideology delineating Muslims as "parasitical" to society – foreign, alien and "disease-like." The founder and former leader of the English Defence League, a far-right, Islamophobic organization, Tommy Robinson, posted an old video showing worshippers leaving a mosque in Birmingham during lockdown. Such misinformation and baseless narratives that fuel anti-Muslim prejudice are generating a negative impression on viewers who are more involved now in online news and debates than ever before.

Prominent far-right journalist Katie Hopkins recently tweeted that “like India, UK too should physically assault British Muslims praying in public.” These examples of right-wing extremists who have been demonizing British Muslims for all of the U.K.'s problems, ranging from spreading the virus to terrorism, indicate how fast the internet can act as an echo chamber and how easily such narratives have the ability to be widely accepted in mainstream society. According to a Time report, more than 300,000 tweets used the hashtag #CoronaJihad between March 8 and April 3, which were seen by 165 million people on Twitter.

Tom Stafford, a professor of psychology and cognitive science at the University of Sheffield, wrote in BBC Future that the “illusion of truth” is created from frequently hearing a statement repeated. Repetition makes a fact seem more true, regardless of whether it is or not. Understanding this effect can help you avoid falling for propaganda. "Repeat a lie often enough and it becomes the truth,” is a law of propaganda often attributed to Nazi Joseph Goebbels.

Nearly half of people in England believe in conspiracy theories about COVID-19, according to a survey carried out by psychologists at the University of Oxford, with nearly 1 in 5 agreeing that Muslims are responsible for spreading the virus. From May 4 to May 11, of the 2,500 adults that took part in the Oxford Coronavirus Explanations, Attitudes, and Narratives Survey (OCEANS) – representative of the English population for age, gender, region and income – nearly 20% of those asked also agreed to some extent with the statement that "Muslims are spreading the virus as an attack on Western values."

The scapegoating of Muslims is not a novel phenomenon yet it is deeply embedded in the historical context of Britain’s colonial past. Brexit has enabled and legitimized prejudice toward migrants and ethnic minorities, especially Muslims. Contemporary Islamophobia has been on the rise and poses a threat to the Muslim community in the U.K. Let’s remember Boris Johnson’s statement about women in burqas looking like “letterboxes” and “bank robbers.” A poll carried out by YouGov for HOPE not Hate found that nearly half of Conservative Party members would prefer not to have a Muslim prime minister.

The promotion of brazen falsehoods and fomenting of misinformation by high-profile figures during the pandemic is unethical and irresponsible. A report commissioned by independent members of the Anti-Muslim Hatred Working Group (AMHWG) has warned that such claims could lead to a spike in attacks when the lockdown lifts.

In light of this, it is crucial that media and political figures take responsibility and be held accountable for endorsing and fueling Islamophobic rhetoric that could potentially endanger already vulnerable communities.

At a critical time when the world is concentrated on a shared purpose in mitigating the strains of COVID-19, dangerous Islamophobic narratives undoubtedly threaten social cohesion and harmony. Social media platforms and politicians must tackle hate speech and fake news online to safeguard minority communities in such precarious circumstances in the U.K., Europe and the U.S., where the pandemic is being weaponized to vilify Muslims.

*An independent journalist and a lecturer