Can EU and Germany mediate Turkish-Greek conflict in East Med? 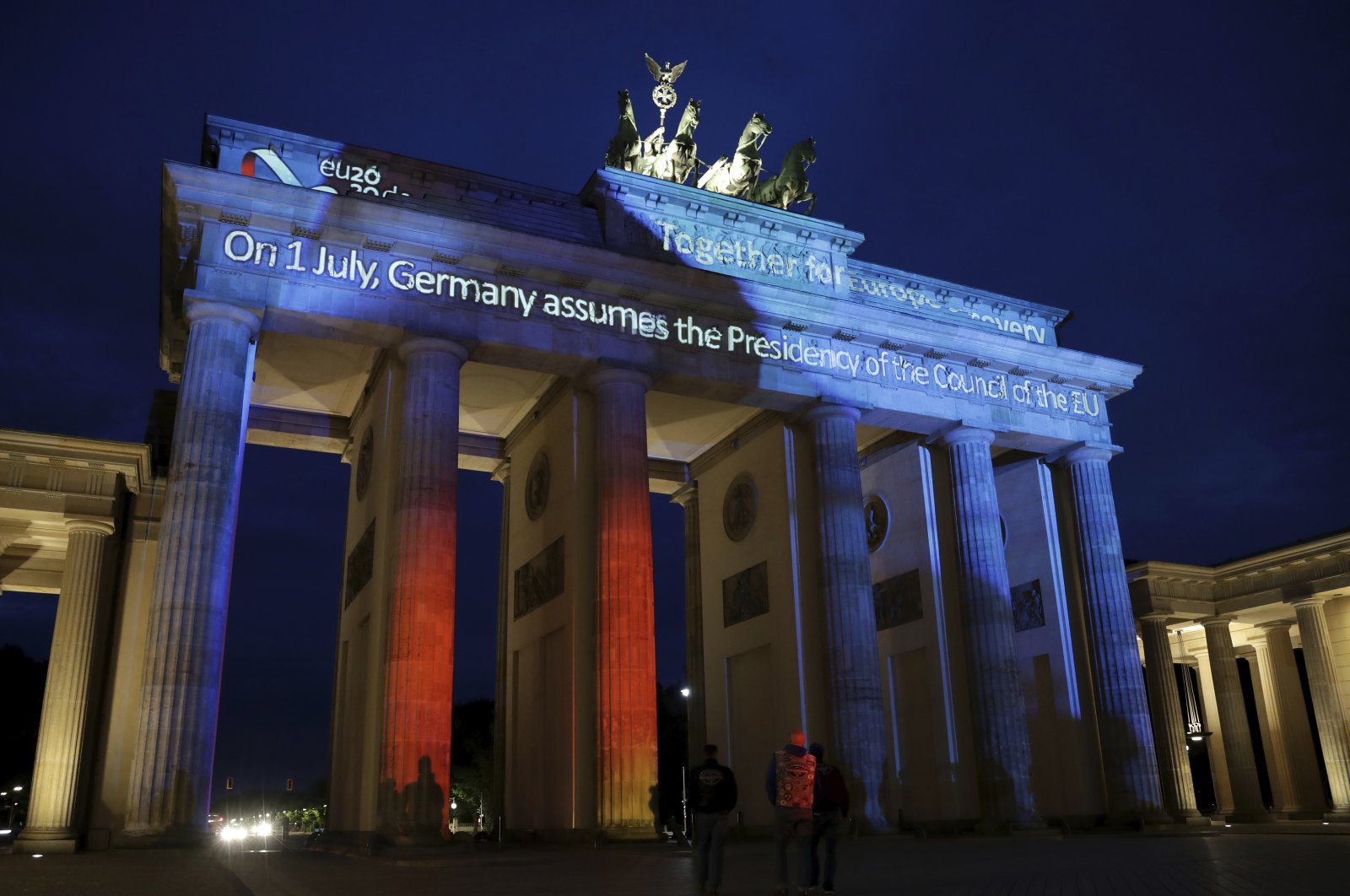 The Brandenburg Gate is illuminated with the slogan "On 1 July, Germany assumes the Presidency of the Council of the EU" on the eve of the official start of Germany's six-month EU presidency, in Berlin, Germany, June 30, 2020. (AP Photo)
by Yunus Mazi Sep 10, 2020 12:05 am
RECOMMENDED

In the Eastern Mediterranean conflict between Turkey and Greece, the European Union and Germany have a difficult task to master as there are three factors that complicate their mediator role.

The determinants are Greece’s maximalist demands, Turkey’s NATO membership and strategic partnership with the EU and French President Emmanuel Macron’s use of foreign policy actions to sustain success.

In addition, from Turkey’s perspective, the EU and Germany cannot play a mediator role because of their behavior in several cases in the recent past. It is obvious that the conflict in the Eastern Mediterranean will not be easily solved.

Greece wants to increase its sea borders, which is why it has maximalist demands in the Eastern Mediterranean and the Aegean Sea regions. According to their position, Ankara should only have a very restricted area from which to carry out its natural gas exploration, despite the fact that Turkey has the longest coastline in the region.

To resolve its conflict with Ankara, Athens declared itself willing to face the issues through dialogue with Turkey at the International Court of Justice (ICJ). The EU, Germany and Turkey took note of this and agreed to it.

After the Greek call, however, an exclusive economic zone (EEZ) deal between Athens and Cairo was signed. By declaring the agreement with Egypt, Greece broke not only the trust of Turkey but also of Germany and the EU, which were not informed about the move.

Turkey rightly felt provoked by Greece, which definitely contributed to the increasing intensity of the conflict. The mediator role of the EU and the union’s council president Germany was thereby made considerably more difficult.

Furthermore, Athens and the Greek Cypriot administration currently want the bloc to sanction Ankara, while Greece has demanded embargoes against Turkey and the breaking off of EU accession talks. German Foreign Minister Heiko Maas, however, pointed out that the conflict would have to be solved on a diplomatic level.

The compelling demands of Greece and the Greek Cypriot administration to the EU and the breach of trust with the EEZ deal with Egypt are not only obstacles in the resolution but also hinder both the mediator's ability to act.

The EU and Germany are aware of these problems. This is why the statements of Maas and Josep Borrell, the EU high representative for foreign and security policy, are so carefully composed and diplomatic. Similarly, German Chancellor Angela Merkel also said that they would support Greece in cases where Athens has rights.

In addition to Greece’s demands, another challenge that complicates the EU’s options for action is that Turkey is a member of NATO. The bloc is also trying to prevent a military conflict between two of its representatives at all costs.

Greece wants the EU to treat and sanction Turkey like Belarus, a country that is neither in the EU nor NATO. Turkey, however, has not broken any international laws and unlike Belarus, it is at least militarily integrated with the West and a strategic partner of the bloc.

Therefore, Greece should not threaten or bully Turkey by vying for support from the EU and NATO. The mediators are in a dilemma, either they protect the national interests of bloc member Greece or seek the establishment of a diplomatic solution between NATO allies.

Besides, France’s harsh attitude toward Turkey is another issue that hinders Germany's mediation. For many years, Paris has been competing with Berlin for the leading role within the union. The French military presence in the Eastern Mediterranean is supposed to be a demonstration of power by Macron and with this maneuver, he also wants to divert attention from his domestic political failures, further complicating Germany’s outlook.

Except for these above-mentioned factors, there are also structural challenges within EU-Turkey relations and because of these difficulties, Ankara believes the bloc and Berlin cannot be mediators.

The problems between Turkey and the EU can be seen in several cases in the recent past. For instance, this is not the first time that Ankara has declared its diplomatic readiness and failed to accommodate Greece and the Greek Cypriot administration.

In the U.N.-guided unification of Cyprus, the Turkish population had approved the Annan Plan by a large majority, while the Greek population rejected it by a vast majority.

Eventually, the Greek Cypriot administration was accepted into the EU as a member state, while Turkey has been in the accession process for more than 50 years. This demonstrates not only Athens' unwillingness to solve conflicts with Ankara through diplomacy but also the EU's biased stance. Therefore, the behavior of Greece in the current conflict and the EU’s attitude is not surprising.

Another aspect of these structural challenges is that the EU ignores its own established values, like the rule of law and the obedience of international law when it comes to the protection of the bloc’s interests and unity.

For example, during the second refugee influx in early 2020, Human Rights Watch regarded Greece’s behavior toward refugees in a degrading manner. Athens, however, called on the bloc for support to preserve its “national security” and despite criticism from the U.N., the EU ignored international law and supported its member. This case shows that Greece and the EU are putting European unity and identity first and foremost in the name of their own interests.

Similar parallels can now be seen in the conflict between Ankara and Athens in the Eastern Mediterranean. Greece is again bringing European unity to the surface, this time to assert its national interests in the region.

The EU defines itself as the protector of universal values and human rights and always emphasizes respect for international law. Just because Greece is an EU member, however, the bloc supports Athens without any legal basis.

European identity is used for creating enemies that further the EU’s interests. How can it be possible for such an actor could play the role of mediator?

The problems mentioned above show that the conflict between Turkey and Greece has deep roots. The EU and Germany face serious difficulties as this situation stems from problems within EU-Turkey relations and also from circumstances in the bloc.

For the EU to find a rational approach as a mediator in this conflict, there must be a consensus within the bloc regarding their interests. Otherwise, the EU hinders itself and cannot achieve profitable results. For this reason, within the EU, Berlin as a mediator should act fairly and cautiously to preserve the bloc’s unity, while Germany should not support Greece’s policy in the Eastern Mediterranean at the cost of ignoring international law.