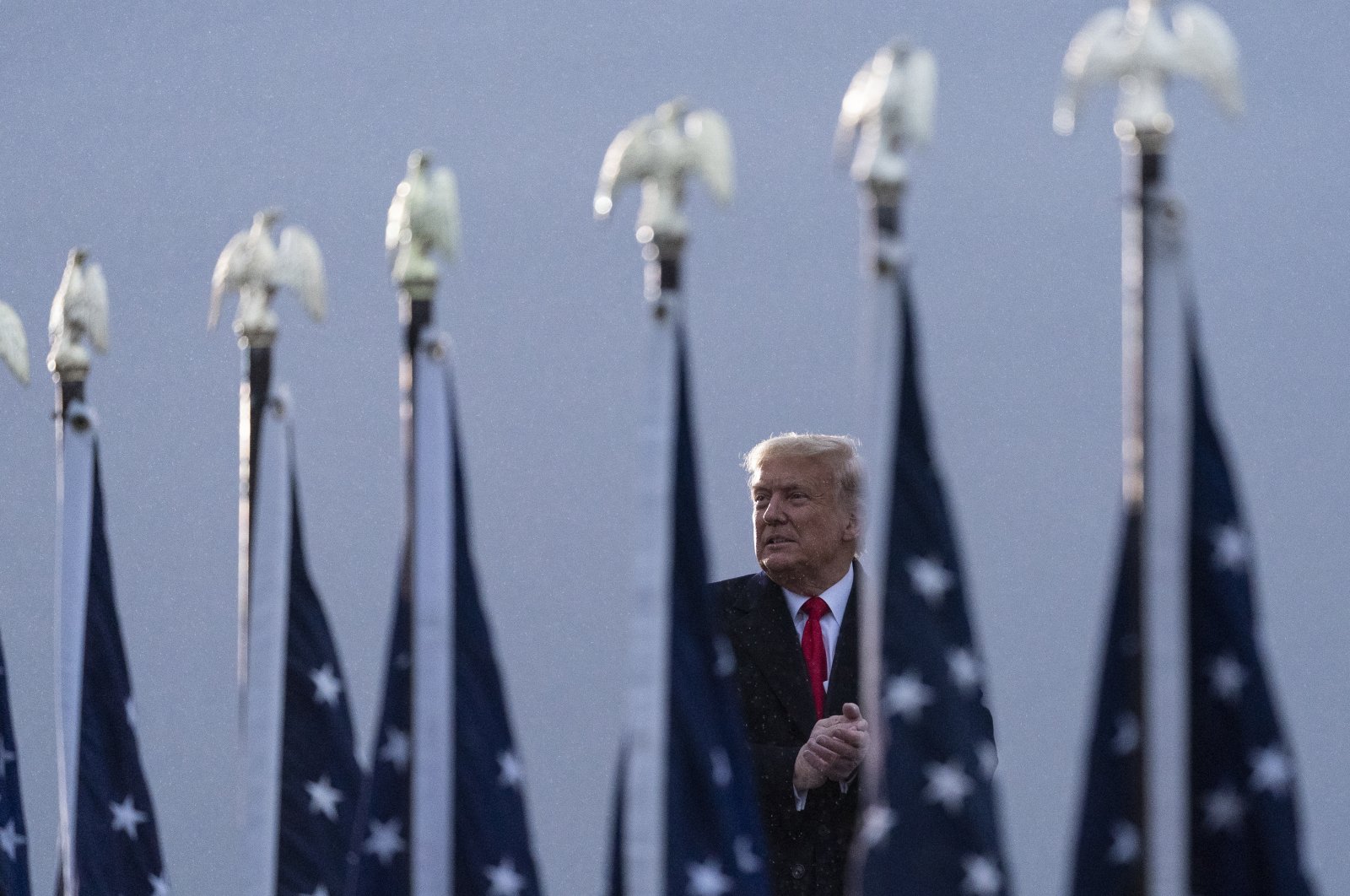 U.S. President Donald Trump applauds as he departs after speaking at a campaign rally at Altoona-Blair County Airport, in Martinsburg, Pennsylvania, Oct. 26, 2020. (AP Photo)
by Jurgens Klaus
Oct 29, 2020 12:05 am

On the one hand is it not reassuring to witness a non-coronavirus issue takes center stage – at least briefly – during the U.S. presidential elections campaign? Yet on the other hand, is it not at the same time extremely alarming to realize that both camps apparently prefer topics aimed at harming the opponent’s reputation instead of focusing on much-needed precise policy proposals?

Regardless of whether one admires its frankness or disagrees with its ideological leaning, one thing is certain: The New York Times (NYT) is always a force to reckon with. So perhaps it is a perfect snapshot of where domestic U.S. politics are, unfortunately, headed when we consult a story published on Oct. 20 of this year headlined, "Trump records shed new light on Chinese business pursuits."

Initially trying to create an aura of bipartisanship, the article recalls that U.S. President Donald Trump (quote) "and his allies have tried to paint the Democratic nominee, Joseph R. Biden Jr., as soft on China" and then goes on by stating "Senate Republicans produced a report asserting, among other things, that Mr. Biden’s son Hunter opened a bank account with a Chinese businessman."

But what the piece thereafter reflects upon is probably a mirror image of its true intention: Trump himself had dealings with Beijing and China, a fact that, reading between the article’s lines and thus according to The New York Times, should suffice for the electorate to turn their backs on the president.

What the article, however, does not produce is any credible evidence that Trump did anything illegal or morally wrong. On the contrary, the NYT in principle presents the best-ever defense Trump could have asked for with regard to his business interests in China.

There is talk about Trump, long before becoming president, having planned to commercially conquer China (which did not necessarily work out as hoped) including a venture in the southern part of the country and that in order to achieve his goals he made contact with Chinese business people as well as with the Chinese government.

Many governments around the globe offer tax incentives to new foreign direct investment flowing into the nation – Trump as a businessperson for sure knew how to make his companies benefit from such offers should they be available, so what?

As a matter of fact, even the NYT acknowledges that Trump "never made a secret" out of his property development plans for an office tower block in southern China.

So without actually saying it, one cannot but assume that the NYT, this time around, wants to portray a sitting president who in his pre-politician past made deals with a communist state as ineligible for office.

But funnily enough, is it not a surprise that this verbal assault materializes shortly after Trump goes on the offensive against Biden’s son (see above)?

And here follows the big question mark: how quickly can even the best of investigative journalists uncover business dealings spanning the entire world and not just China but Ireland and the United Kingdom as well? How fast can a team of reporters collect all this information and contact government authorities and private individuals? How long would it take to verify all the information gathered before going into print?

For sure, more than a day or two. In all likelihood, the NYT was waiting for the right moment, or in this case: the undecided voter, the swing voter moment.

This puts the NYT's efforts to discredit Trump (again) into their wider arsenal of journalistic ammunition so to speak. Challenge him on the response to the pandemic? Question him on his economic recovery visions? Ask him about the role of America and its foreign policies under a new geopolitical and thus multipolar world order? The list of potential issues would be rather extensive but what is the best strategy according to the Times editorial team? Try and see whether anything sticky (sticky, as in immoral or illegal) would be unearthed concerning Trump’s past business deals – particularly those involving China.

No such luck. Hence one must politically speaking dig a little deeper to better understand why the mostly liberal coastal elites (East Coast to be precise) are seemingly so much at odds with Trump and why its front-line media organization the NYT happily lends line space to and for that mission.

Do not misinterpret me: This opinion page contribution is not a public relations article endorsing Trump although it focuses on him. Instead, it is aimed at looking beneath so-called objective journalism and basically, is a call to all in our profession to give credit to whoever merits credit and to challenge whoever needs to be challenged, but at the end of the day, focus on the news, the hard facts and not just the soft undercurrents so easily manipulated (hence very difficult to grasp and verify in person by the reader). Such a tool can manipulate the readership as well as parts of the U.S. electorate, too.

In a nutshell and written with all due modesty: Trump represents a self-made millionaire who had huge successes and equally huge losses but never gave up. He believed in the American dream and for sure lived it, including running for the highest office in the land. He can be mistaken like everyone else and gladly admits it when found out. He takes to social media at midnight when most users would only broadcast messages in the light of day with proper reflection after a good night’s sleep. He says what he thinks and thus becomes an easy target for hate speech. Granted, often he himself uses not the most appropriate of vocabulary to make his point, something he should look into should a second term come his way and that Biden would need to remember should he get elected.

Trump is not against intellectual thought; he does not condemn people holding multiple Ph.D.'s. But he himself chose a different way of life, the world of business and later politics. The latter might be compared to life in lecture halls yet the former is based on factory floors or as in Trump’s case, concrete and steel. And this is what angers the establishment: how can a man from outside our inner circle end up above all of us?

Trump was totally wrong challenging Biden’s family on China; Biden and the NYT were wrong to retaliate. America needs to roll up her sleeves to survive intact in a post-pandemic world. From racism and unemployment to health care and education... the domestic agenda is long and getting longer by the day.

For a liberal newspaper like the NYT, those should be the headline-making news items instead of falling into the trap of party politics. Unless that is what was intended, and no one knows whether it will ultimately backfire. A country with over 320 million inhabitants cannot be compared to a football club firing the manager halfway through a season should more losses than wins occur. Yet in times of crisis, many voters tend to stick with the familiar when times are getting tough and rough instead of chancing it.

This is perhaps what the NYT is sensing after all as well: Trump might just get away with it.