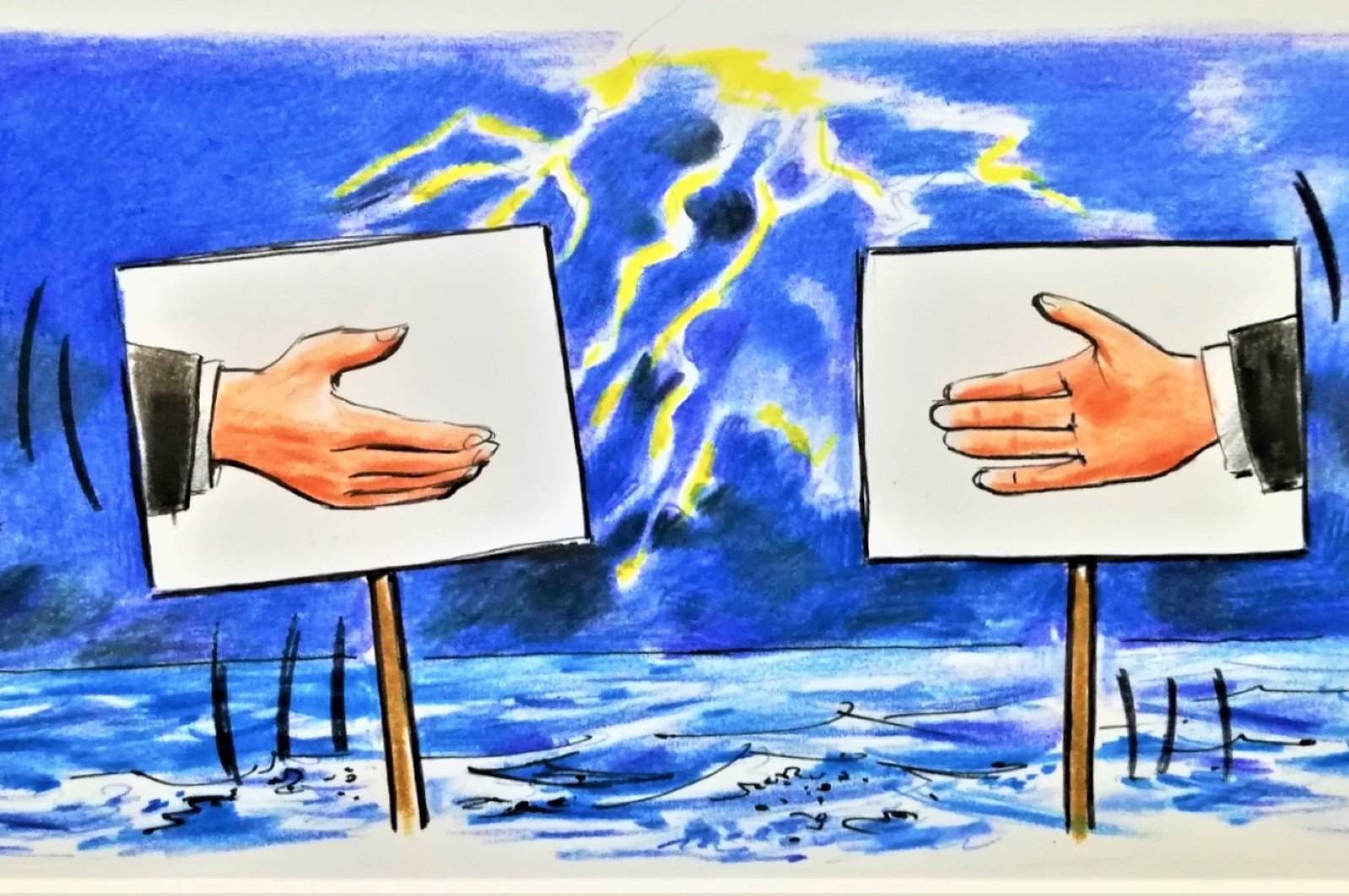 The two regional powers have since maintained diplomatic ties at the level of charge d'affaires and have been at odds with each other on every issue where their roads crossed, be it in Syria, the Gulf crisis between Qatar and the Saudi-led axis, in Libya and most recently in the Eastern Mediterranean.

Bilateral ties have seen all sorts of confrontations at different levels – official and unofficial – from the exchange of harsh words to media propaganda.

Recently, however, signals of a possible reconciliation have come from both countries, particularly due to the changing dynamics in the Eastern Mediterranean and the Turkey-Greece crisis over the region’s energy resources.

Turkish President Recep Tayyip Erdoğan and Foreign Minister Mevlüt Çavuşoğlu have both confirmed that intelligence units on both sides have recently met.

“It is not that we are not meeting with Egypt. There are meetings at the intelligence levels,” Çavuşoğlu said in a televised interview back in September.

“We have to be realistic. For us to have a deal with Egypt, we must maintain good relations with them.”

Çavuşoğlu's made the comments in the context of the Egypt-Greece Exclusive Economic Zone (EEZ) agreement signed in Cairo, delimiting their maritime boundaries in the Eastern Mediterranean.

Erdoğan had also commented on Turkey-Egypt ties in the context of Cairo’s deal with Athens, saying there were “no obstacles to intelligence level meetings, but the deal between Greece and Egypt upsets us. There is a difference between Greece-Egypt ties and our relationship with Egypt. Talks can be held.”

The president was, in a way, signaling that Ankara and Cairo share a deeper, more historic and strategic political tie compared with the one with Athens.

Reports, in the meantime, have also suggested that Cairo issued an advisory for the local media not to propagate an anti-Turkey stance in their coverage.

Such positive signals from Ankara may have several meanings for its regional policy and ties with the Egyptian capital.

Firstly, in the context of the Eastern Mediterranean energy disputes, Ankara has said it is ready to negotiate with anyone involved to reach common ground. Thus, the comments on Cairo and the intelligence-level meetings show that Egypt is no exception to such an approach, despite key differences on several issues since 2013.

In a way, Turkey is willing to put all differences aside to reach common ground and reconcile with regional countries over the Eastern Mediterranean issue.

“Egypt is one of the important countries in the region and the wider Arab world. Of course, we cannot ignore how el-Sissi came to power – the coup there, people that were killed, what happened in Rabaa Square, the ensuing political arrests and Morsi’s death. Regardless, if Egypt is willing to move forward with a positive agenda on regional issues, it will not go unanswered on our side,” Turkey’s Presidential Spokesperson Ibrahim Kalın had said.

In other words, Ankara is willing to turn a new page with Cairo on regional issues and work with Cairo on a road map on how to strategically deal with regional issues. Reinforcing such signals of rapprochement with some sort of maritime deal between the two countries will be mutually beneficial and improve their respective positions in the region.

While such a deal would benefit Ankara, for Cairo it would mean establishing a pragmatic relationship with a regional power and undermine the political influence of Gulf countries, like the United Arab Emirates (UAE) and Saudi Arabia. This would also benefit Egypt’s troubled economy and leverage its political position in the region.

Secondly, even small reconciliatory steps over the Eastern Mediterranean could lead to the eventual rapprochement of economic and political ties. Such normalization may not be easy and realized in the short-term. However, the regional political ground seems fertile enough for such an initiative to come to fruition.

Egypt’s economic weakness, despite support from the UAE, is angering the country’s people, hence, the recent wave of protests. Strengthening bilateral trade between Egypt and Turkey can enliven trade and investments between the two countries.

Besides, the UAE has the aim of becoming a regional powerhouse, building on its ties with the United States and Israel. This can also create public anger in Egypt and the Arab world in general. If Egypt rebuilds its historical regional role, regains its political and economic power and reconciles with Turkey, it could also check the UAE’s rising influence over Cairo.

Thirdly, Turkey and Egypt could play significant roles in the fight against terrorism in the region and help restore political stability in conflict-hit countries.

As Kalın said, it will be difficult for Turkey to overcome differences in Cairo’s approach to political dissidents in the country, like in Syria and Libya. However, the Ankara-Moscow relationship, based on a pragmatic approach and focused on areas of mutual benefit, can be a good starting point.

Constructive talks between Turkey and Egypt over the energy dispute in the Eastern Mediterranean could be a good starting point if an effective road map is drawn.

Aside from the positive signals at the political level and signs of willingness to repair ties, the people of both countries are aware of the deep historical and cultural ties and want Ankara and Cairo to be on good terms.