Contactless world 2.0: The end of cash? 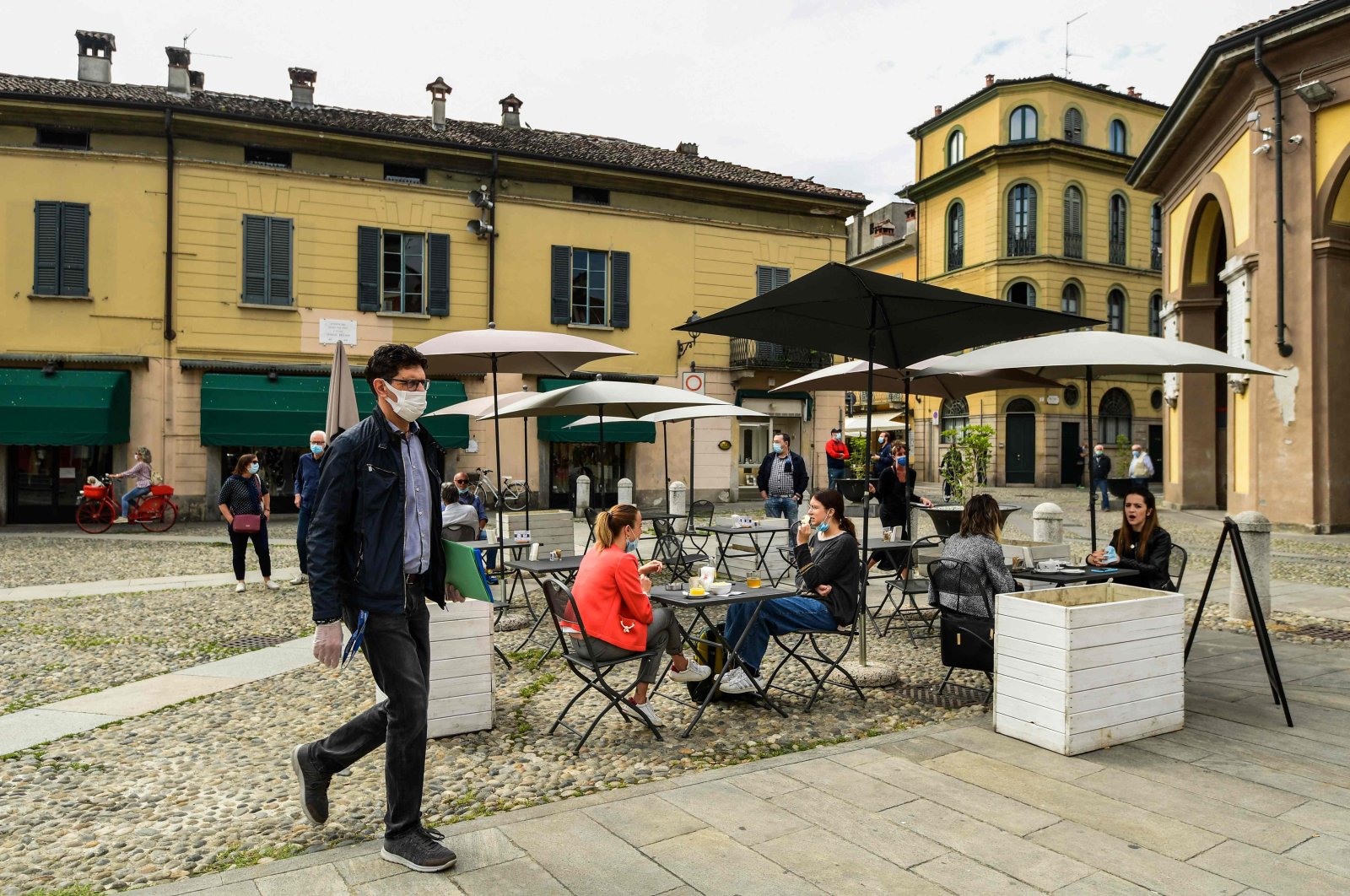 Residents have a drink at a cafe terrace and go about their activities in central Codogno, southeast of Milan, one of the villages at the epicenter of the coronavirus pandemic, Italy, May 20, 2020. (AFP Photo)
by Jurgens Klaus May 28, 2020 12:05 am
RECOMMENDED

"Cash or card, sir?" In the past, one would have assumed the restaurant or shop owner preferred the former as payment for a single beverage or newspaper, as paying with a little plastic card seemed inappropriate, time-consuming and above all else, might have incurred extra charges. We would just hand over a few coins – done deal.

Recently, however, it seems that this question has become obsolete as more and more customers immediately show their card or smartphone long before being asked about how to settle the bill. What used to be a kind of privilege for those able to own a debit or credit card has long since become nothing but a practicality.

This shift had begun long before the coronavirus pandemic changed everything we ever thought we knew about how to manage our daily lives. Especially over the past three to four years, cashless payments became extremely prevalent, in particular for smaller amounts. As a matter of fact, this is precisely the gist of the phenomenon: Whereas in the past we settled bills for a single beverage by handing over the cash, nowadays we prefer to flash a plastic card. Actually, in ever-increasing numbers, the type of card we use will be a bank card rather than a credit card. Shopkeepers will be far from annoyed or angry as this becomes almost standard.

Various reasons for this change can be mentioned. First, paying for one item with a banknote often results in receiving a handful of coins in return. Do this more than once, and a handful soon turns into a pocketful – very impractical to say the least. Second, even before today’s pandemic took center stage, most of us would have had worries about whether or not exchanging lots of coins or a number of banknotes is hygienic. Third, we simply might have forgotten to carry enough cash with us for unexpected purchases. In that case, a card comes in handy, literally.

However, from the onset of cashless payment systems by means of point-of-sale (POS) machines, there was a two-tier approach, or some would say a two-class system. You either had a credit card at the ready with one of a few well-known logos printed on it, or you had to resort to a basic debit or bank card. The latter very often only worked in the country of issue and regardless of whether it had a globally accepted logo, it was frequently rejected by that very POS machine. Embarrassment abounded, particularly on the customer's side of the counter, and he or she would undoubtedly resort to cash on the next visit.

To put this into perspective, CNBC announced on April 20 that Mastercard had seen a 40% rise in cashless payments in the United States. since the start of the coronavirus. But this trend was in place beforehand.

Technology has made it all possible. For example, a decade ago a nonstarter in the U.K., today any POS machine worth its money will happily accept bank, Giro or credit cards. The latest models accept your smartphone as long as it is enabled for such payment options, able to be held in front of the scanner, too. And, this includes "foreign" cards or "foreign" mobile devices, as the only thing you need is an internet connection and access to online banking.

With limits doubled in many countries – Germany and Austria, for example – even more serious grocery shopping sprees can be sorted through cashless payment. Hence, cashless often becomes completely contactless as we no longer touch the POS since a PIN is not even needed.
This leads us to the key question of our brief analysis: Technology sorted, acceptance levels at an all-time high, both with customers and among the business community, what will be the ultimate outcome – a cashless society where nothing but plastic or mobiles reign supreme?

Is society ready for cashless?

On the one hand, the biggest obstacle for a complete withdrawal of cash options seems to be the fact that many consumers would, in all likelihood, spend more than they had budgeted for as that extra beverage, that additional item in our supermarket trolley or that unforeseen present in the gift shop is now just a few seconds away and no longer depends on the exact amount of available funds we carry with us in the form of coins or banknotes. One should not be arguing the case that a majority of shoppers cannot make a sound family budget before hitting the mall, but reality shows having "no limits" might be tempting.

On the other hand, the advantages are obvious: Practicality is the buzzword, whether in our own neighborhood or across oceans. Cashless payment is fast and, as discussed above, extremely hygienic.

But is it democratic – as in, can everyone really obtain one or more such cashless or even contactless payment options? Here, the clear answer is a "yes" paired with a "no." One reason is that in many countries, less than half of the adult population signed up for online banking, hence the phone option is off. Yet this is a personal choice, keeping our shoppers' democracy intact. Besides, most high-street banks are required by law to issue at least a bank card to their customers even if a credit history would prohibit issuing a credit card. Therefore, access to cashless payment methods has become possible for people from all walks of life and no longer for the privileged few.

Another point of concern, however, is that if more and more of us prefer cashless and banks and retailers follow suit, there may come a day when we simply have no choice left. This would be an undemocratic scenario.

Let us not forget one further issue: Deciding to go cashless means that our card issuers can trace each and every transaction we ever made, whether small or large. Granted, our average consumer has nothing to hide, but do we really want to embark on the path toward a totally controlled and monitored world of individual shopping and related payments? Are we not watched enough – including receiving our daily email telling us that what we watched last night might be a good hint of what we might want to watch tonight?

The clever solution would be to have us, the consumer, have the final word – the final say in all of this. Why is it not possible to allow us to one day go plastic, another day mobile and on a third day, use cash? And on a related note, we should never forget that young people need to acquire not simply a taste for money but an understanding that it is a limited commodity.

Giving your child pocket money and having them literally count it (of course, including all due hygienic handwashing after each touch), makes children appreciate the value of money and that it is something special. The topic of saving money should always be intertwined with the issue of spending (some of) it.

Whether they pay contactless or with cash later on in their adult life is their choice. Hopefully it remains so in the post-COVID-19 world, too.