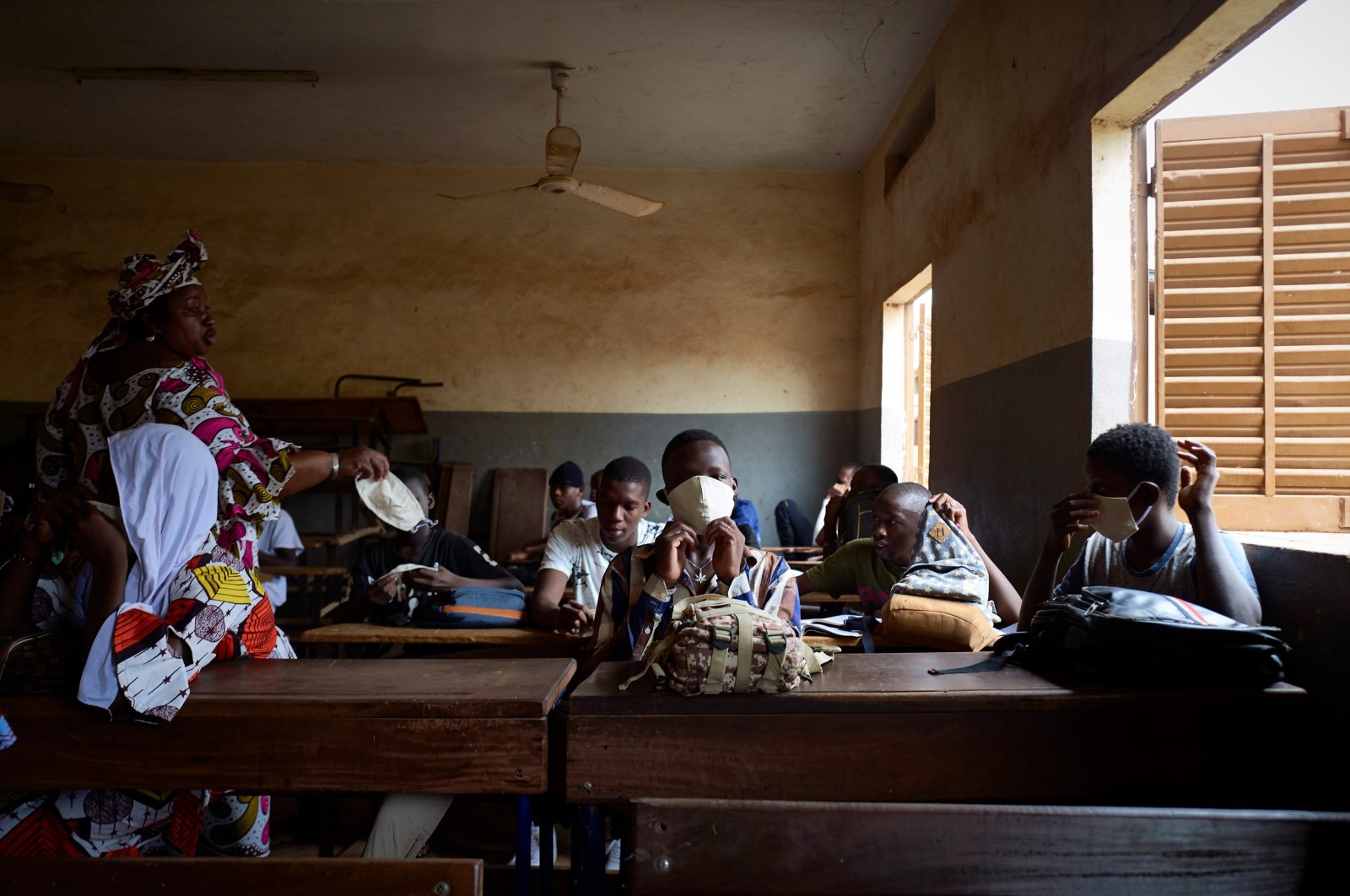 Malian students attend a lesson as the government decided to reopen the schools after two months of closure due to the spread of COVID-19 coronavirus, in Mali's capital Bamako, June 2, 2020. (AFP Photo)
by Imad Atoui - Arbi Boumediene Sep 11, 2020 12:05 am
RECOMMENDED

The coronavirus outbreak is transforming the world as we know it. It has revealed the nativist tendencies of countries and taken back the political bargaining power from the hands of foreign powers. Troubles will remain, protests will resurface and systems will shake.

Since the outbreak of the coronavirus, many have made short- and medium-term predictions about the post-pandemic era; however, West African countries have always deviated from such projections.

Despite having weak health systems, an informal economy and no social distancing, West African countries handled the health catastrophe relatively better than developed countries. Some have claimed that West Africa’s young population played a decisive role in avoiding a virus that usually targets the elderly.

While the medical impact seems less, the virus's effect on the rest of the world will shake West Africans. With the outbreak, the world imposed air, sea and land lockdowns as borders were closed.

Economic trade was restricted and states focused inward to cope with the virus. Africa fell victim to such policies. Furthermore, West African countries are consumption-driven economies that are heavily reliant on aid and assistance from their former colonizers. The region also has a long history of epidemics like Ebola and malaria.

Moreover, the region suffers from social, political and security instability. The social fabric in West Africa remains a ticking bomb whenever crises occur between conflicting ethnic groups fighting for power.

The political landscape is pretty spoiled, as states are weak, and there is a deep divide between African societies and their political systems. It does not matter whether political systems are run by civilians or a junta since each does the bidding of Western interests. Insecurity is increasingly rising in recent years with active armed groups.

The pandemic has further aggravated the turmoil of West Africa as international organizations cut back on their aid. International economies have also collapsed and are unable to help the region as the dispute between big world powers for future leadership continues.

Due to these factors, Africa is likely to become one of the most affected regions of the world. Even in the best-case scenario difficult times are ahead for the continent.

The COVID-19 impact on external powers in the region would bring about a rise of anti-Western movements against political systems asking for radical changes, the reemergence of armed groups and the collapse of regimes. The plan to reduce the U.S. military presence in Africa will undermine the capacity of French control in the region and this will push the region into chaos.

Despite the U.S.' continuing presence in Africa, it will inevitably lose influence there as Beijing expands its economic influence. China's growing dominance over global supply roots may eventually force the U.S. to deploy its military to secure maritime lines.

As U.S. calculations tend to be more geostrategic than political both superpowers need to be ready for any potential war. The last U.S. actions in the Mediterranean speak volumes about its strategy, particularly it's recent repositioning in Greece and its political activism in Libya.

In other words, the U.S. is concerned about Russian involvement in the Mediterranean since Russia is backed by China. Thus, the U.S. is repositioning itself with Greece to stifle and control the Russian movement in the region. They want to make sure that military lines are controlled and military supplies are guaranteed between Europeans and Washington in case of war.

Furthermore, Russia's growing influence in North Africa with escalating economic ties and the Chinese Belt and Road Initiative (BRI) is likely to push Washington into withdrawing more forces from different parts of the world to deploy them in the Mediterranean and maritime canals.

What about U.S. alliances? The coronavirus has pushed the U.S. into a situation where it cannot trust its allies as China stepped up to provide medical aid to Europeans while the U.S. turned its back on them. Many countries are now revisiting their foreign policies and adjusting their alliances after their allies failed to help them in times of need.

Likewise, France cannot persist alone against the rising anti-French movement in West Africa as its role is undermined without the support of the U.S. against armed groups. In this case, France has to withdraw, find another partner or face a bloody fate.

The region has experienced movement against Western colonialism in recent years, and political leaders are considered agents of foreign regimes. Just recently, the June 5 Movement against President Ibrahim Boubacar Keita in Mali intensified tensions between the populace and the political system forcing a coup. This push will spread to other areas amid the economic crisis left by the pandemic and weak political systems.

Armed groups are likely to take advantage of the situation to reappear. Despite being a social movement asking for political change in Mali, it was galvanized by religious sentiment.

The armed groups will seize the opportunity to argue against a “Laique” (secular) political system that has failed to govern the country. Thus, with this narrative and the vacuum left by the state, the armed groups will become more active in West Africa.

Despite the French initiative to cope with the Mali coup, they have not been very effective in the region. Even though France can end the troubles in Mali, the question remains: Will France be able to calm West African societies as a whole and will it be able to stand against asymmetric threats?

The French performance looks fragile, perhaps France will rely on neighboring countries to reposition itself; however, it seems like colonialism is finally coming to an end. However, the question remains: Will France be able to change the situation to its advantage?