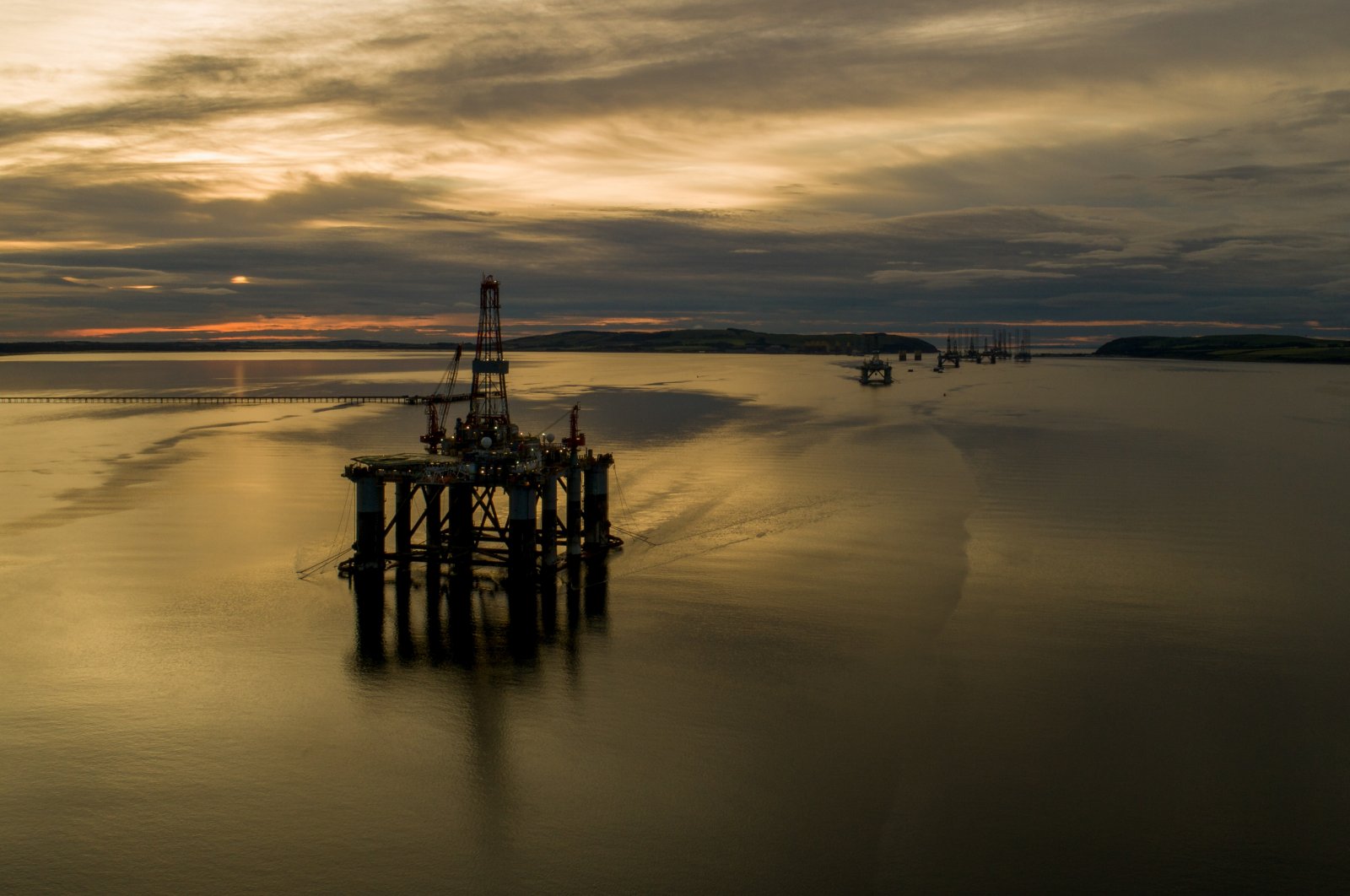 Mobile offshore drilling units stand in the Port of Cromarty Firth in this aerial view in Cromarty, Scotland, June 23, 2020. (Photo by Getty Images)
by Elif Selin Çalık Dec 08, 2020 12:05 am
RECOMMENDED

COVID-19 has severely affected oil and gas demand, resulting in plummeting prices. As worldwide lockdowns sent demand in a downward spiral, the situation was aggravated by a Saudi-Russian oil price war.

In March 2020, Saudi Arabia announced unexpected price discounts of $6 to $8 per barrel to customers in Europe, Asia and the United States. This announcement triggered a free fall in oil prices and other consequences that same day. Brent crude fell by nearly 30%, the largest drop since the Gulf War.

Meanwhile, global authorities like the International Monetary Fund (IMF) said government fiscal measures against the coronavirus must be harmonized to combat climate change and ensure an environmentally sustainable pandemic recovery.

In that light, governments around the world have announced their global energy shifting policies. As a long-time follower of the U.K.'s green energy developments, I realized that the British government had learned from the COVID-19 process when U.K. Prime Minister Boris Johnson announced the "Green Industrial Revolution" plan on Nov. 18.

It was a major development when he confirmed that the U.K. would ban all petrol and diesel cars by 2030. This plan, however, did not satisfy Green Party co-leader, Sian Berry. "The funding in the government's long-awaited 10-point plan doesn't remotely meet the scale of what's needed ... It pales in comparison to the tens of billions committed by France and Germany."

In addition to those miraculous governmental developments, big oil and gas companies like Shell, BP, Chevron, Exxon Mobil are also shifting toward the green economy and are starting to make their energy systems greener to adapt to the governments' new post-COVID-19 green plans.

Last April, Shell announced its "zero-emission, eco-friendly" energy production policies. Green investors welcomed the pledge from energy giant Shell that it will be carbon neutral by 2050, but environmental groups cautioned that its commitment still fell short of the drastic emissions cuts required to avert a climate breakdown.

At this positive point, how can we trust these companies during the term of shifting mainly to green energy? Are they really green saviors?

It is quite logical and timely to ask those questions after some official observatory groups revealed some of the energy giants' lobbying activities have been fueling the climate disaster.

According to a research published by European official environmental groups in October 2019, the five biggest publicly listed oil and gas companies and trade groups representing them spent more than 250 million euros ($303 million) lobbying the European Union to influence climate action since 2010.

In 2019, the green groups declared that the money spent on access to officials showed oil and gas firms were seeking to influence decisions in Brussels.

Pascoe Sabido, a researcher and campaigner for the non-profit research group Corporate Europe Observatory (CEO), told Agence France-Presse (AFP), "CEO investigated and looked at those oil companies' own declaration and the EU's lobby transparency register and published meetings with the cooperation of Food & Water Europe, Friends of the Earth Europe, and Greenpeace EU."

After this investigation, Sabido says it found that the five firms – BP, Chevron, ExxonMobil, Shell and Total – declared spending of 123.3 million euros on EU lobbying between 2010-2018. Trade associations representing them spent an additional 128 million euros in that period.

Those realities do not make us believe the energy companies' "greenwashing," anti-fossil fuel investments. These kinds of duplicitous public relations activities of the fossil fuel industry are delaying, weakening and torpedoing much-needed climate actions.

With money and sponsorships, the oil and gas lobby is fueling the climate disaster.

Clearly, the oil companies are not our friends as long as they don't build sustainable and sincere environmental projects. Whatever they say about their ethical credentials, they continue to invest in fossil fuels that accelerate climate breakdown and the death of the planet and species.

In 2019, Shell announced a $300 million fund for "investing in natural ecosystems" over the next three years. The investment sounds very big until you compare it with Shell's annual income of $15 billion. Shell's transition toward a low-carbon future is almost invisible in its annual report in 2019.

After COVID-19, I can understand more why last year actor Mark Rylance resigned from the Royal Shakespeare Company over its sponsorship by BP.

Rylance explained his resignation with this question: "Surely the RSC wants to be on the side of the world-changing kids, not the world-killing companies?"

According to a special report by the Guardian, the oil company had been influencing young people with cheap tickets. This will put into danger the Earth those young people will inherit. This is poisoning them and their subconscious.

Therefore, what those companies are doing to protect the environment and prepare our future for zero-carbon days are only "PR and greenwashing," while the latter can easily make a company appear to be more environmentally friendly than it really is.

Environmental policies must be more than PR activities, and the politicians must be smarter than those companies, to lead us toward a cleaner and greener tomorrow. COVID-19 has really shown us that climate change and carbon emissions can be far more devastating than this pandemic. It is a real ticking bomb.

*Journalist, Ph.D. candidate and energy expert based in London

Journalist, Ph.D. candidate and energy expert based in London
RECOMMENDED