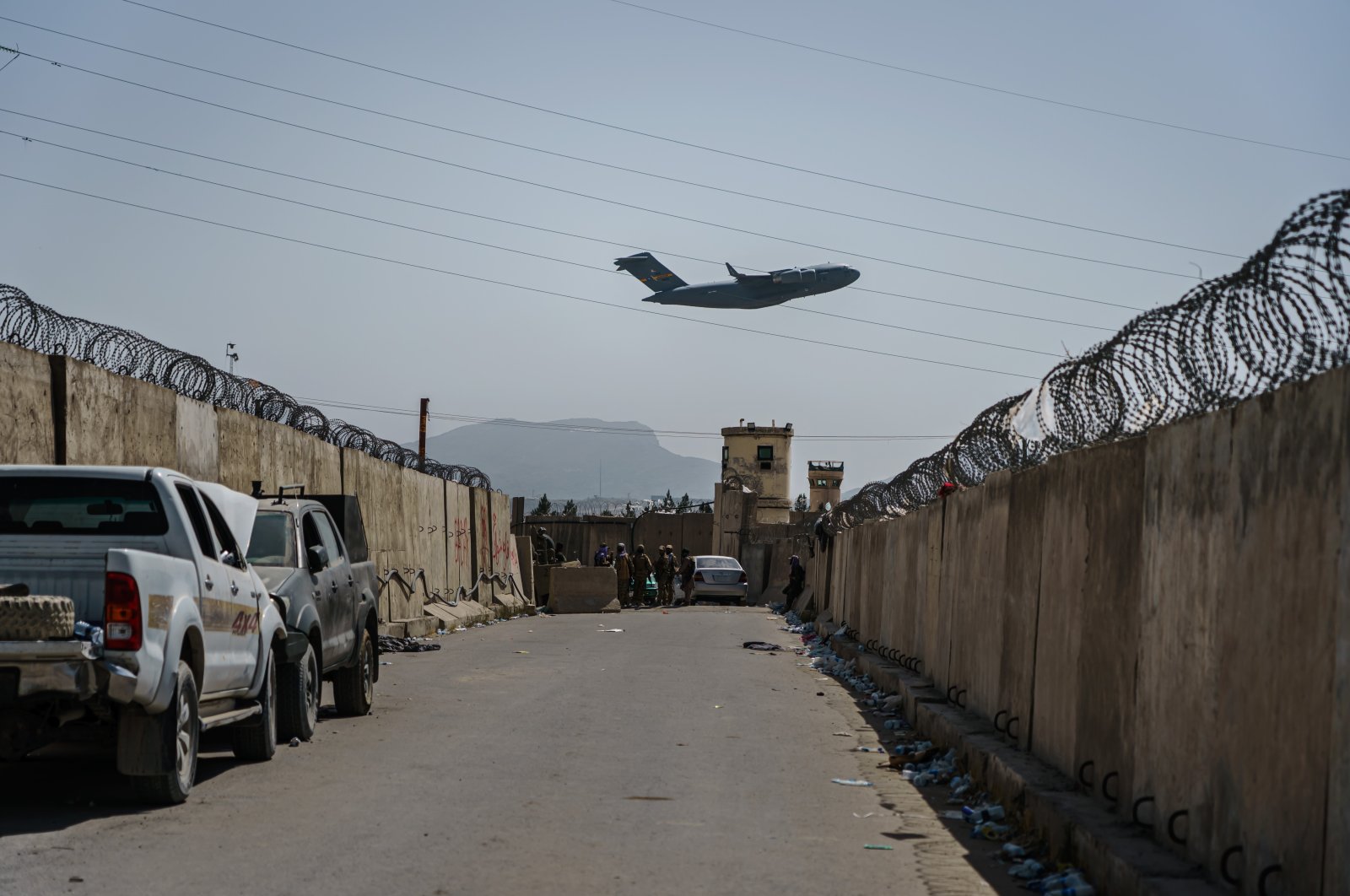 A C-17 Globemaster takes off as Taliban fighters secure the outer perimeter, alongside the American controlled side of of the Hamid Karzai International Airport in Kabul, Afghanistan, Aug. 29, 2021. (Photo by Getty Images)
by Imran Jan Oct 19, 2021 12:05 am
RECOMMENDED

It seems like war crimes are being reimagined. In Afghanistan, war crimes may be defined as crimes committed by the Taliban, for the Taliban and of the Taliban. And to avoid confusion, when I say the ICC in this article, I do not mean the cricket body but rather the International Criminal Court. There is a great chance the two can be confused with one another, not only for having the same abbreviation but also for being equally dysfunctional.

Karim Khan, the chief prosecutor of the ICC, announced that he would only focus on prosecuting war crimes committed by the Taliban and Daesh in Afghanistan and “deprioritize” focusing on the war crimes perpetrated by the United States and other countries that occupied Afghanistan for two decades. It sounds like there is only salad on the menu but no main course.

The supreme war crime of all is aggression because it is responsible for everything that follows. For example, the 2006 bombing of the Al-Askari Mosque in Iraq as a result of the extreme Sunni-Shiite conflict was a direct corollary of the American invasion of Iraq. That same aggression also led to the creation of Daesh, including the crimes that Daesh committed. I can go on and on but the point is that aggression is the most extreme war crime of all, more criminal than crimes against children, extrajudicial killings and so forth. Yet, aggression would not be prosecuted in Afghanistan.

Furthermore, the announcement by ICC prosecutor Karim Khan might convince many leading astrophysicists that wormholes exist because to give the U.S. and coalition forces a clean slate is only possible if Khan had escaped to the deep space where he may have spent only a few minutes while 20 years have passed on earth. And now that he is back, the war crimes committed on Afghanistan's soil by the U.S. and coalition forces are unknown to him as if he wasn’t on the planet when the heinous crimes were committed.

More importantly, the not-so-hidden hand of the U.S. is playing tricks in the background. Khan's stance places a shield between the U.S. and the accusations of injustice. The predecessor of Khan at the ICC, another prosecutor named Fatou Bensouda, in a remarkable act of bravery and heroism had started work on the prosecution of American war crimes committed in Afghanistan. That is unheard of and unthinkable on so many levels. Former U.S. President Donald Trump's administration had imposed sanctions on Bensouda because of her efforts to hold Americans accountable for the alleged war crimes committed in Afghanistan and Palestine.

Incumbent U.S. President Joe Biden's administration did with a smile what Trump could never have done with a frown and angry tweets. Biden lifted the sanctions from Bensouda. U.S. Secretary of State Antony Blinken called those sanctions “inappropriate and ineffective.” Now, she is no longer the chief prosecutor and the man in her place, Khan, speaks music to American ears. The American strategy is easy to decipher: When the ICC prosecutor was not friendly, the Kabul regime was. Now that the Kabul regime is not friendly, the ICC prosecutor is.

Khan says that “genuine and effective domestic investigations” cannot be done in Afghanistan because the Taliban are in charge. It might be a paradigm shift if he realized that no investigations are needed to learn about the crimes the U.S. and coalition forces committed. They are quite well documented. All he needs to do is read some books and articles by some brave investigative journalists such as Jeremy Scahill and others. Khan reminds me of the movie "Sleepers," where Brad Pitt saves his friends who had committed a murder. He acts as the opposing counsel and loses the case in court by pretending to be fighting for justice as a prosecutor. Sometimes the choice is really between justice and your favorites. When it comes to the American war crimes in Afghanistan, proving guilt is easier than initiating the prosecution.

The U.S. still enjoys legal immunity from any ICC prosecution. Right around the time when the Rome Statute established the ICC, the U.S. enacted a law called the American Service-Members’ Protection Act (APSA). The law stipulates that if the ICC brought any American to the court for prosecution, the U.S. would rescue him or her even if it required invading the Netherlands, where the court is situated. In the Netherlands, this U.S. law is called The Hague Invasion Act.

So, if some maverick ICC chief prosecutor ever decides to prosecute an American, he or she would most certainly fail but would likely succeed at causing America to invade a beautiful European country.