Do Ankara and Rome share same interests in Libya? 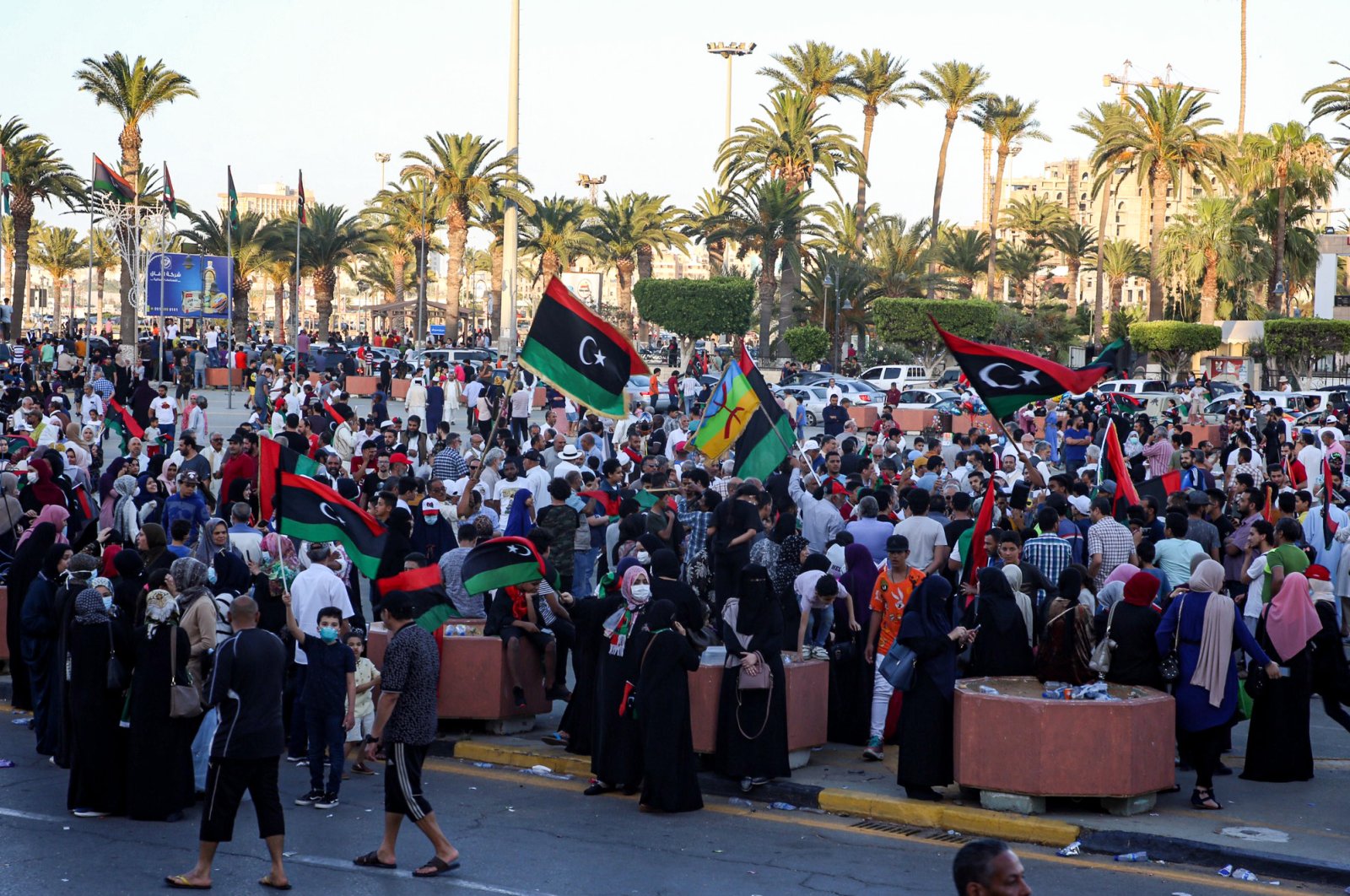 People celebrate with Libyan national flags in the capital Tripoli's Martyrs' Square, after the U.N.-recognized Government of National Accord (GNA) captured the town of Tarhuna from forces loyal to putschist Gen. Khalifa Haftar, June 5, 2020. (AFP Photo)
by Valeria Gianotta Jun 10, 2020 12:05 am
RECOMMENDED

In the long and thorny Libyan conflict, there is now at least one certainty: the victory of Prime Minister Fayez al-Sarraj’s Government of National Accord (GNA). Thanks to ever-increasing Turkish support, the GNA has been able to regain important outposts and force putschist Gen. Khalifa Haftar's militias back. This result has paved the way for a new scenario and new balance of power.
This has been a game-changer that increasingly challenges Haftar's effectiveness while raising big questions regarding the international support granted to him and the possible upcoming dynamics. Although all stakeholders to the conflict claim their main goal is the stabilization of Libya and the implementation of a political process for a democratic and modern political synthesis, it is now time to examine the reality of this on the ground. Indeed, several actors have been involved, with it becoming clear that Russia, the United Arab Emirates, Egypt and France joined on behalf of Haftar’s efforts. Indeed, at any one time, several stances and various ambitions – sometimes converging, sometimes floating toward something of a role-play – have manifested in the conflict.

Actually, it seems that the most recent shift in diplomatic dynamics has found Italy greatly absent, despite the country's main foreign policy objectives being historically connected to Libya. Energy sources, infrastructural projects and the fight against illegal immigration are all at the top of Rome’s political agenda, which has long been said to be committed to stabilizing the country.
Concerning the energy issue, Italy is not self-sufficient like Libya, from which it buys gas and oil while investing in various energy plants. Hence, the Italian energy company ENI is engaged in various drilling activities, with Rome actively participating in the Greenstream pipeline designed to convey gas directly to Sicily.
In addition to economic and financial interests, there are a number of geopolitical factors on the table. As Italy is the natural European landing point of migration flows across the Mediterranean, important agreements on immigration have been signed and intense collaborative efforts have been made to combat criminal and terrorist organizations.

However, while Libya is of great strategic importance, Italy has yet to take a suitable initiative. As a supporter of Sarraj's GNA, Rome has attempted to mediate between the two main conflicting groups by facilitating talks with Haftar and supporting the Berlin process for a lasting and shared solution.
Moreover, as a member of the European block, Italy has often followed the line proposed by Brussels, but it has opted as well for a moderating approach toward Turkey. In this framework, Rome did not sign the Cairo declaration proposed by Egypt, Greece and the UAE aimed at circumventing the interests of Ankara in the Eastern Mediterranean. The same approach was adopted in the European Union's (EU) Operation Irini, whose strict implementation would have been detrimental to Italian interests.

Before pondering such developments, it pays to examine Rome's failure to openly declare support for Turkey's stance. In fact, Rome and Ankara have long sat on the same side and agreed that the future of Libya is in the hands of the GNA. In a time of much media speculation and widespread rumors about the Turkish presence in Libya, there is margin for a mature debate by openly questioning why Italy should not fully align with Turkey.
Don’t Ankara and Rome share the same interests in Libya? Why do they have to be at odds in the Eastern Mediterranean? After all, actors such as Egypt, Greece and Greek Cyprus might not necessarily protect Italy's interests there.

In terms of taking advantage of opportunities, Turkey and Italy can afford to reaffirm their solidarity by cooperating in more controversial areas by pivoting on their long-standing and close bilateral economic ties. Therefore, in the Eastern Mediterranean, a positive agreement between the Italian company ENI and Turkey would be a favorable outcome. Indeed, we should not forget that the most recent events have deep roots directly related to the unresolved dispute over Cyprus.
For many years, this issue has been a hostage of some European decision-makers who have certainly neglected the principle of sovereignty natural to the Turkish Cypriot community. Unfortunately, the thorny stalemate today is the product of this shortsighted strategic view and double-standard approach that provokes consternation in both the internal and international political dynamics of the EU.
It follows that within the European block, there are a number of countries that aim to patronize the political agenda by claiming to be representative of the whole union. Perhaps, too often Italy has excessively honored the community principle at the expense of a balanced reciprocal attitude, aligning with dominant positions that ultimately erode its national interests.
Regarding more complicated dossiers, the typical Italian attitude has been to appease France, despite some outstanding issues with the latter. This has been the case in Libya, where by taking various stances, its mutual opposition seemed more cosmetic than factual. As a matter of fact, no open condemnation for the support granted to Haftar has been recorded and this has opened the way to an ambivalent outlook among policymakers.
Indeed, it looks like Italy does not have an ambitious foreign policy agenda or to some extent, it is not so keen to fully protect its own interests. In its calculations, however, the Italian policymakers seem to have underestimated Paris' resolve as an instigator of the war in Libya and the consequences that pursued. Thus, one is bewildered in trying to comprehend why Rome ingratiates itself with an actor who promotes policies so divergent from its interests. Furthermore, based on these assumptions, what is their margin of cooperation in the Eastern Mediterranean?

Beyond these recent developments, it would be better to push aside any rhetoric masked by politically correct attitudes in the name of a genuine realpolitik approach. Indeed, what is at the stake for Rome is the protection of its national interests. Therefore, according to the realist principle of bandwagoning, further strengthening its strategic partnership with Turkey would be a valid option to provide for Italy's having an active status in the region. After all, in politics, he who dares really can win.
*Assistant professor at University of Turkish Aeronautical Association, Ankara