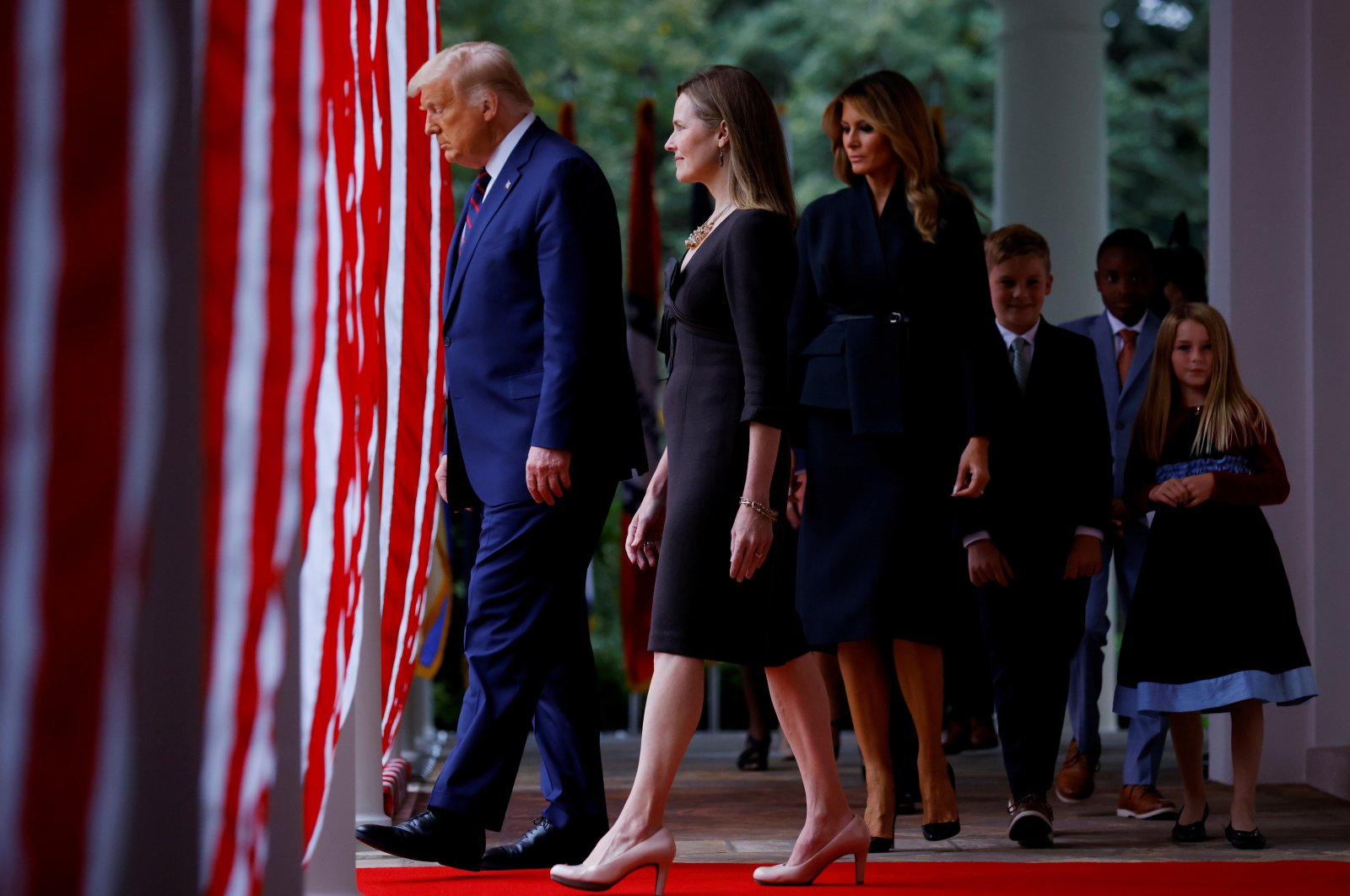 U.S. President Donald Trump arrives to hold an event to announce his nominee for the U.S. Court of Appeals for the Seventh Circuit Judge Amy Coney Barrett to fill the Supreme Court seat left vacant by the death of Justice Ruth Bader Ginsburg, who died on Sept. 18, at the White House in Washington, D.C., Sept. 26, 2020. (Reuters Photo)
by Sabria Chowdhury Balland
Sep 30, 2020 12:05 am

When it was announced to U.S. President Donald Trump that Supreme Court Justice Ruth Bader Ginsburg passed away, while expressing his condolences, one could just see the glee in his eyes. The opportunities the vacant position on the Supreme Court presents for Trump are not negligible.

Although it is utterly uncustomary to install a Supreme Court Justice in an election year, Trump announced almost immediately that by the following weekend, he would announce his pick for the appointment. Unsurprisingly, Republican Senate Majority Leader Mitch McConnell echoed Trump in declaring that whomever the president chooses to appoint would get immediate approval from the Senate.

This is the same McConnell who in 2016, blocked then-U.S. President Barack Obama’s choice to name a Supreme Court justice after the passing of Justice Antonin Scalia, declaring that any appointment by the sitting president would be null and void. He said the next Supreme Court justice should be chosen by the next president—to be elected later that year. The hypocrisy is hardly shocking coming from the Republican leader and his party.

As planned, Trump hurriedly nominated Judge Amy Coney Barrett, a federal appeals court judge. She is an antithesis to Ginsburg, adored and respected for her progressive and forward-thinking position on issues and her significant contributions in shaping women's rights.

Barrett is the answer to the Republicans’ prayers and the Democrats’ worst nightmare. On the whole, the Republicans love her for her age (she is only 48 years old) and the fact that she is a staunch social conservative.

To clarify about her age, the U.S. Constitution provides that Supreme Court justices hold their positions for life. Thus, in the eyes of the Republicans, Barrett would serve as a constant conservative in Supreme Court decisions, giving the conservatives a 6-3 majority.

Most likely, she will attempt to repeal the Affordable Care Act (more commonly known as Obamacare) creating total chaos and leaving 20 million people without health coverage in the middle of a pandemic. More than 130 million Americans, including 6 million COVID-19 survivors, would be vulnerable to discrimination based on their preexisting conditions.

Barrett will mostly strike down a federal law that bars all felons from owning guns. She also favors Trump’s policies that make it more difficult for immigrants to get green cards if they rely on government assistance programs.

One of the key issues in any Supreme Court confirmation is female reproductive rights and autonomy of reproductive decisions. It is certain that Barrett would review and attempt to overturn decisions such as the famous Roe v. Wade case, in which the Supreme Court’s ruling protected a pregnant woman's liberty regarding abortion, free from government restriction.

A common sentiment among many Americans is that Barrett is a far cry from her predecessor, Ginsburg, whose gender equality work made it possible for her to even pursue a career as a law professor and judge while raising a family with young children.

When Trump declared that he would quickly nominate someone to the Supreme Court, he had specified that the judge would be a woman.

Americans have had four years to get to know the manner in which Trump functions. Saying this pick would be a woman was his way of pacifying women and progressives, or rather, anyone who is not in his base of ultra-right, white, Christian, non-university graduate pool.

Simply choosing a woman is not sufficient. What that woman represents, what she stands for, what ideas she defends, what her court verdicts and dissents say about her are what matter. Trump does not seem to have weighed all the pros and cons, nor does he seem to care.

If confirmed by the Senate, which, as stated, we know she will be, the U.S. Supreme Court will quickly and aggressively move to the right. That will undoubtedly have serious negative repercussions for the U.S. and globally.

For instance, when Trump came up with his infamous “Muslim ban,” the case was decided by the Supreme Court, affecting millions of lives and families worldwide.

The answer is quite simple. The first reason is that her ultra-conservative values appeal to Trump’s base of electors.

The second reason is Trump needs a Supreme Court conservative majority if Democratic presidential candidate Joe Biden is to win. Trump has admitted he will not concede the presidency unless the Supreme Court decides a contested election. A majority of conservative justices, especially two nominated by Trump based on their ultra-conservatism, will fit in perfectly with his plans and that of the Republican Party.

By crying “wolf” and claiming the Democrats will rig the elections, enough controversy and mayhem will be created if there is a Biden victory, at which point they will request the Supreme Court to decide the outcome and the winner.

Centuries after the ancient Chinese military general and strategist Sun Tzu's words “Opportunities multiply as they are seized,” still ring true. It is exactly what Trump has done but to what outcome, remains to be seen.

*Op-ed contributor based in the U.S.