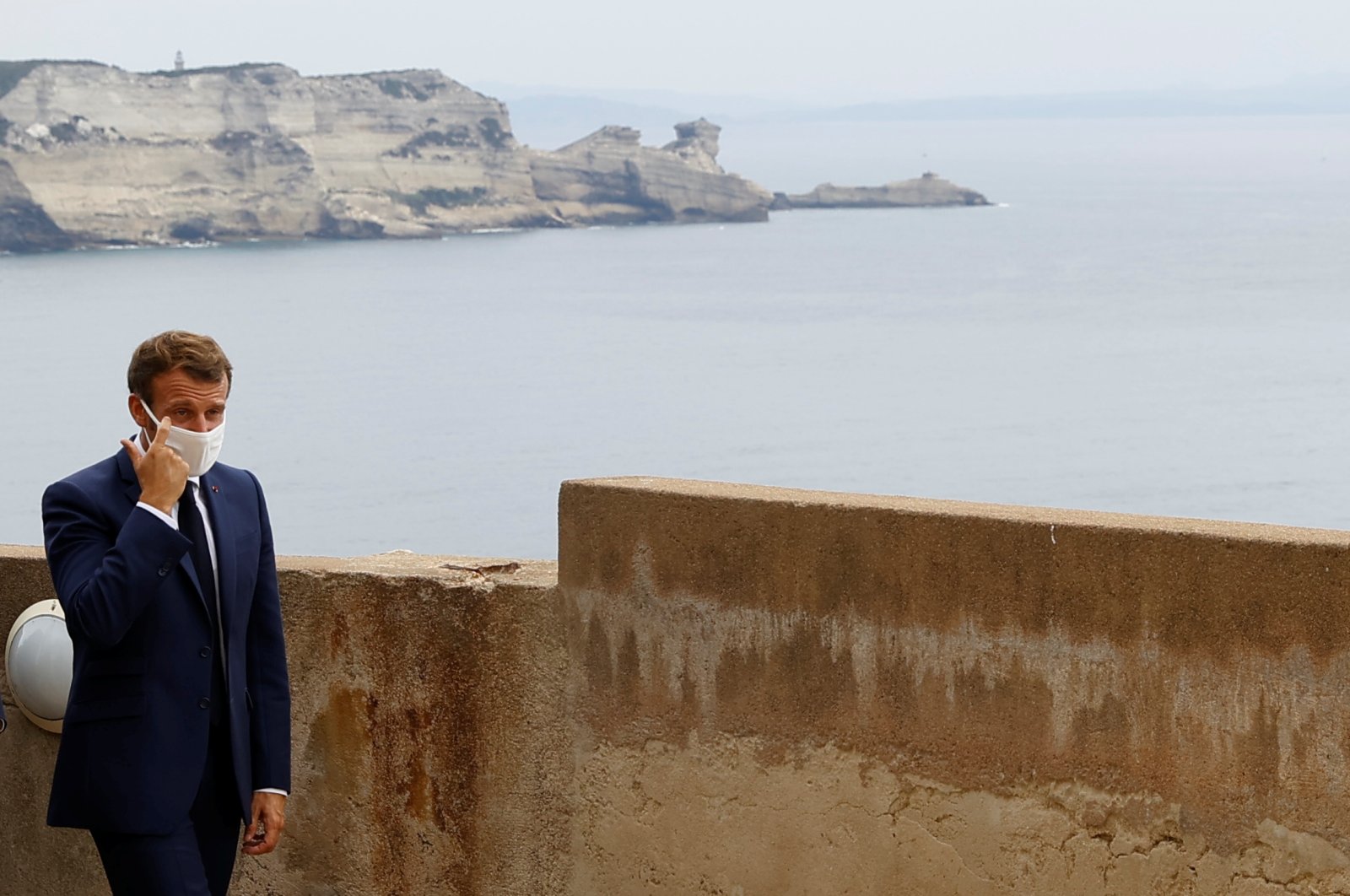 French President Emmanuel Macron gestures during a visit in Bonifacio, on the island of Corsica, France, Sept.10, 2020. (Reuters Photo)
by Batu Coşkun Sep 17, 2020 12:05 am
RECOMMENDED

The term "diminished giant" is often used to refer to the status of Great Britain following the collapse of the British Empire. As the former empire, on "which the sun never set," found its global influence diminished, Britain found it increasingly difficult to fit into the new global political order, as it receded economically, militarily, all the while holding on to the image of former British imperial greatness. While this might still be the case for Britain, the term today is most apt for President Emmanuel Macron's France, who has constructed a novel imperialist narrative in hopes to reclaim lost French glory.

Make no mistake, France was never the "giant" Britain was, and hence Macron's recent imperialist crusade makes his situation even more ludicrous. Macron is under the impression that France is a great power that can influence international politics. He is convinced that France has a mission, sanctified by its colonial past, to shape the politics of former colonial possessions, exemplified recently in Macron's trips to disaster-stricken Lebanon in a bid to build new Lebanese leadership.

France has always perceived itself as an alternative hegemon in the international order. Under Gaullist foreign policy (a French political approach based on the thought of late French President General Charles de Gaulle), France broke off from NATO, pulling French forces from NATO's central command structure in 1966. Former French President Jacques Chirac vehemently opposed the U.S.-led invasion of Iraq, irking the United States until former President Nicolas Sarkozy provided the ground for a rapprochement. France has also sought for a position of leadership in the European Union, shadowed by an economically superior Germany, who to France's great distaste has emerged as the de facto leader of Europe.

Now Macron has taken up the mantle of former French leaders, capitalizing on the U.S. departure from the global scene, he has upped the ante, hoping to reclaim France's lost grandeur. Macron's projection of former greatness is most acute in the Middle East and Eastern Mediterranean, which has emerged as the theatre for France's bid for leadership. France's diminished giant syndrome has produced the so-called "Pax Mediterranean" doctrine that Macron has outlined, directed against Turkey's allegedly imperialistic ambitions.

This is completely false, combatting Turkey is Macron's Trojan horse in realizing his great power dream for France. The facade of Pax Mediterranean coupled with France's alignment on key regional issues with Turkey's adversaries, such as the United Arab Emirates (UAE) and Egypt, have all become part and parcel of this novel French grand strategy in the Middle East. Macron has accused Turkey of having "fantasies about the past." The only fantasy in this equation is the French one, which has been given a new lease of life by Macron himself.

Amid the pandemic, Macron has made three trips of interest to the Middle East. While France continues to battle one of the most severe outbreaks in Europe, Macron has been prioritizing foreign policy over domestic politics, where he has become increasingly unpopular. Macron visited Beirut on two occasions under the pretext of aiding the Lebanese leadership in the aftermath of the catastrophic explosion in Beirut. Here Macron paraded as a patron, snubbing the Lebanese leadership, all the while grabbing power in order to ensure that Lebanon comes under French auspices, as several regional players are hoping to influence the Lebanese political scene.

Lebanon's proximity to the Eastern Mediterranean, where French naval forces have now started a campaign in the hope to deter Turkey, is surely one of Macron's motivations. Beirut also provides opportune ground as a base for France's regional designs. The local Christian community has a longstanding affinity for France and recently Macron has been revealed to have dealt with a senior figure in Hezbollah as a means to design Lebanese leadership in a manner that serves French interests. Macron is playing a dangerous game in Lebanon, where he runs the risk of getting embroiled in sectarian politics. Iran, Turkey and Saudi Arabia all have an interest in Lebanese politics, Macron's courting of Hezbollah could upset the delicate regional balance that pervades in Beirut.

Macron also made a trip to Iraq at the beginning of this month, being the first head of state to visit the new Prime Minister Mustafa al-Kadhimi. Here one remark made by Macron reveals his motivations. Macron remarked on Iraqi "sovereignty" and the need to preserve it. These words were clearly a veiled statement against Turkish anti-terrorism operations in the PKK dominated areas in northern Iraq that have intensified over the past weeks.

The official discourse from the Elysee refuses to recognize the PKK and its Syrian wing the YPG as terrorist organizations. Macron in several statements has insisted that Turkey and France do not share the same definition of terrorism. He also has not been shy to lend official support to the YPG, hosting them in his office.

This rationale has penetrated deeply into the French state. Recently it was revealed that a contemporary history text-book used by French high school students had an entire section devoted to the history of the PKK, under the pretext of Kurdish history. Macron clearly views Kurdish politics as a means to further his great power designs. Indeed, it was later made apparent by Nechirvan Barzani, leader of Iraq's Kurdistan Regional Government (KRG), that Macron had approached him with regards to Turkey's operations in the area with a deeply misguided understanding of the situation.

Turkey is the scapegoat

Turkish-French relations have been strained for some time due to subsequent French presidents being opposed to Turkey's European Union membership. The relationship has taken a different course under the current French president. Macron has styled his entire foreign policy doctrine on combatting Turkey's role in the region. In Libya, France has decided to support the putschist Gen. Khalifa Haftar alongside the Emiratis and Egyptians who see Macron as a major Western European ally in the absence of American presence. In the Eastern Mediterranean, French warships have been given a free rein by Greece who sees Macron as heading the so-called European response to Turkey. In Syria and Iraq, Macron is actively supporting PKK elements to ensure that France has a presence in the region.

The diminished giant that is France could not have simply announced that it wants a larger role in the region. This would have made France look interventionist, if not outright neo-colonialist. Instead, France has made Turkey into a scapegoat, accusing Ankara of having imperialist motivations in the region, and has proclaimed to combat Turkey.

Macron does not comprehend Turkey's uncompromising security rationale and has no grip on the broad Turkish hinterland that exists in countries of the former Ottoman Empire. France's projection of its diminished giant status onto Turkey can only end in humiliation, all the while risking conflict with a fellow NATO-member country that consistently provides for the security of Europe.