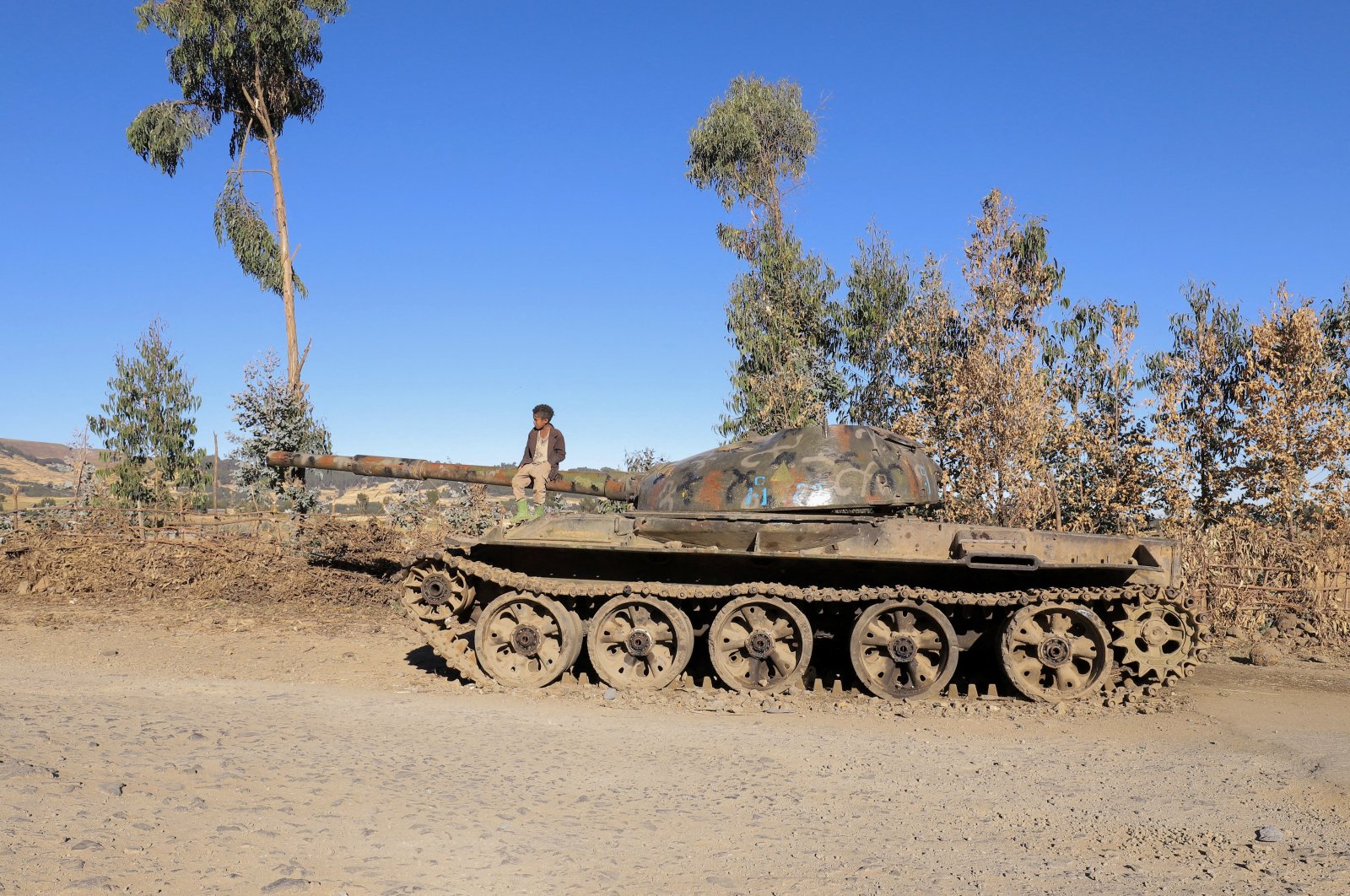 A boy sits on the barrel of a military tank destroyed recently during fighting between the Ethiopian National Defense Force (ENDF) and the Tigray People's Liberation Front (TPLF) forces in Damot Kebele of Amhara region, Ethiopia, Dec. 7, 2021. (Reuters Photo)
by Abdiwali Mohamed Sayid Jan 14, 2022 12:05 am
RECOMMENDED

The fight between the federal government of Ethiopia and the Tigray People's Liberation Front (TPLF) took on a new phase after Prime Minister Abiy Ahmed decided to lead the war from the front lines. Moments after Abiy's decision, the government media aired footage showing him wearing military dress while prompting the federal troops. Although it was unverifiable, Abiy appeared to be at the battleground. His decision brought a tangible military gain as the federal troops forced the TPLF to withdraw from the territories they had captured and retreat to their home region as their leadership announced. This swing of the pendulum occurred after months of federal troops being on the back foot and TPLF forces reaching up to a day's drive away from Addis Ababa.

Ethiopia's current conflict goes back to 2018 when Ethiopia's political turbulences saw Abiy ascend to the premiership. To implement his reform agenda, Abiy seems to have been convinced from the outset of the inevitable need to take power from TPLF affiliates and consign them to the margins. Hence, the government embarked on purging Tigrayans from critical positions, particularly military and intelligence posts. Also, the government dissolved the infamous Ethiopian People's Revolutionary Democratic Front (EPRDF) that, besides the TPLF, had three other satellite parties under its umbrella. In addition to that, Abiy made a historical rapprochement with the isolated state of Eritrea – the staunch enemy of Ethiopia for the last three decades. The opening to Eritrea brought international prestige to Abiy, culminating in his winning of the Nobel prize. On the other hand, it was part of a bigger move aimed at squeezing the TPLF.

The relatively settled down fight – as it seems now – broke out on November 2020 after the TPLF launched an attack on the Northern Command of Ethiopia's National Defense Force (ENDF). With the help of the Eritrean troops and paramilitary militias from the Amhara ethnicity, the ENDF captured the capital city of the Tigray region (Mekelle) within a few days. According to human rights organizations, the forces that entered Mekelle committed crimes against humanity such as extra-judicial killing, torture and mass rape against Tigray women. Also, the government imposed a total embargo on the region including the suspension of humanitarian aid entering the region. The collective punishment by the federal government sparked a huge international outcry, with some observers even warning of a potential genocide if the violence continued. Part of the fallout of the deadly conflict is the existence of more than 9 million people who are in a dire situation and need urgent humanitarian assistance according to the United Nations.

Back to 19th century

One thing for sure is that Ethiopia's dilemma isn't a novel one that started with the TPLF. It emerged long before, during the second half of the 19th century when the northern Abyssinians, backed by Europeans, subjugated the southern people for the purpose of exploiting their resources needed by the European entrepreneurs. At that time, European colonizers bolstered the Abyssinians at the expense of the colonized southern people by creating a unique system not implemented in other parts of Africa – an internal dependent superstructural colony that served the interest of the Europeans. In their seminal book "The Invention of Ethiopia," Bonnie K. Holcomb and Sisai Ibssa stated that in order for the Ethiopian regime to maintain existence it has had to successfully manage three basic requirements:

Thus, the tight control and oppression policy against the colonized nations have been part of keeping the state together; otherwise, the very existence of Ethiopia would be threatened.

Certainly, the state dominated by Abyssinians failed to embrace other nationalities through a creed-based state project, rather, they sought legitimacy through coercion and tight control. The state harnessed every available brutality to subjugate their colonized populations in the interior, like the Oromo, Afar and Somali people, with the land of the colonized people grabbed and distributed as booty to Abyssinian garrisons – sometimes through spurious land-reform justifications.

By the same token, the TPLF regime, which ruled the country for nearly 30 years, followed the same path of coercion and subjugation with uninterrupted financial and technical support from Western powers. Since the turn of the 20th century, successive tragedies revealed the essence of the problem, which was a state project forcefully compelled by certain ethnic groups from Ethiopia's highlands at the expense of the subjugated majority who have been rejecting the project. The West's outcry against what is happening in northern Ethiopia is by no means a sign of goodwill, but only aims to sustain the miserable dictatorial system that serves the West's neo-colonial agenda.

In conclusion, the 13-month conflict achieved nothing and prolonged conflict will only lead to further bloodshed. Hence, the federal government and the TPLF should come to gather at the table of negotiation to prevent a metastasizing hostility. The government's victory over the TPLF could be a starting point for an alternative approach, particularly given the TPLF's announcement that they have pulled back in order to give space for negotiations. An incremental approach should be devised. Hence, a deal that firstly stipulates the cessation of hostilities should be reached so that other daunting issues can be dealt with at a later time.

Surely, reaching a settlement on the Tigray issue is not enough to solve Ethiopia's centennial dilemma, because the country's troubles stem from lack of popular legitimacy and deep resentment. Hence, listening to the voice of the subjugated people and searching for their acceptance is inevitable. Sorting out the current conflict in the north should not be the last object but rather a stepping stone to solving the other complex situations in the rest of the country.

As part of discovering a comprehensive solution, a practical step would be to call for an ambitious truth and reconciliation conference that aims to discuss and fix Ethiopia's future. First and foremost, the results of such a gathering should lead to the recognition of past atrocities committed by the ruling elite (highlanders) and should set the blueprint through which people could determine their destiny – if they prefer to be within Ethiopia or not, or if they opt for a federal or confederated Ethiopia. Contrary to that, trying to use force for unity will open a Pandora's box of violence across Ethiopia that will have a negative impact on the stability of the region.