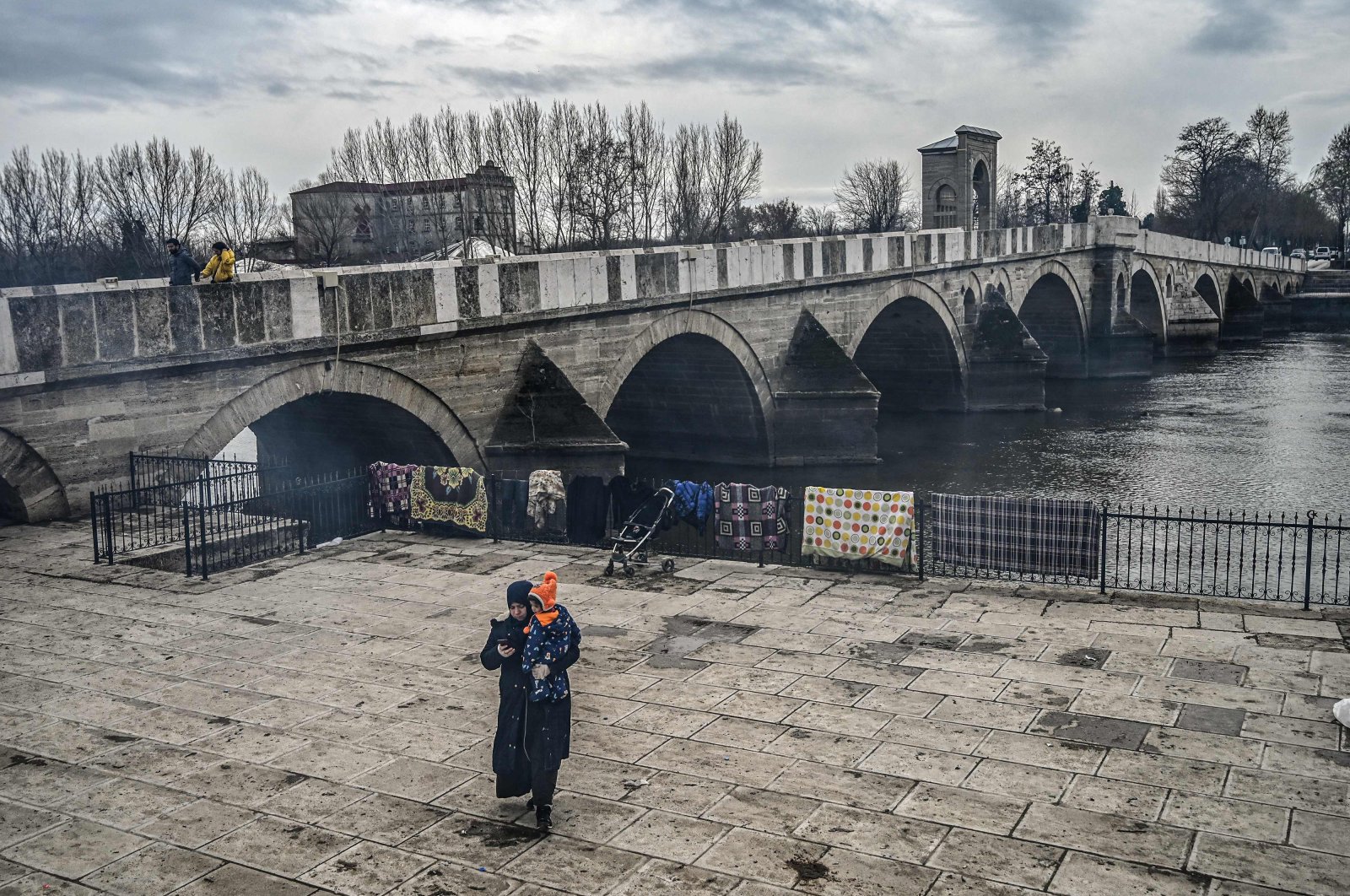 A migrant woman carrying her baby walks and looks at her mobile phone as she and others wait to resume their efforts near the Pazarkule border gate to enter Europe, Edirne, March 5, 2020. (AFP Photo)
by Jurgens Klaus Mar 12, 2020 12:05 am
RECOMMENDED

On one hand, no one has ever doubted that Turkish hospitality is legendary. Tens of millions of foreign tourists traveling to these shores year after year and an ever-growing number of working, studying or retiring expatriates are proof of that statement. Yet, on the other hand, even a role-model welcoming nation such as Turkey one day in the near future will reach its migrant and refugee absorption capacity. It's no wonder since almost 4 million people in need have already found shelter and a new home in the country.
Hence, it is only logical that Ankara is sending out warnings to European allies and partners. Needless to say, they mostly fall on deaf ears, as shocking as it may sound. A EU supposedly so proud of its heritage including the Copenhagen criteria, a bulwark of humanity and human rights and above all else, democracy, instead continues to lecture Turkey about what to do and what not to do.
Thus written, frank words are required to make a point. First, it was not Turkey that started a civil uprising in Syria so brutally countered by the Assad regime at the time. People were asking for dignity and human rights and nothing else, a just cause. Second, it was not Turkey that invented Daesh, depending on which "title" one prefers for this heinous killer and terror organization. And third, it was not Turkey propping up terrorists south of its Syrian or Iraqi borders to train future murderers intent on causing mayhem in many European countries from where they originally hailed or to aim at dividing Turkey.
What Turkey did, however, was to initially open its borders whenever needed, eventually resulting in almost 4 million innocent men, women and children reaching a safe haven – Turkey.
Ankara soon became aware of the human suffering across its southern borders and the related risk of a terror enclave – or "state" as the terrorists had had in mind. It was clear the conflict would not be over as quickly as expected. Turkey simply had to react, ideally pro-actively by either securing its very own borders or making certain that those terrorists or even state-sponsored actors trying to destabilize the region and Turkey would be neutralized before it was too late. This proactive approach includes the right to retaliate even outside of Turkey’s territory should the aggression originate from there.
Thus, Turkey became the terror-defying outpost not just for her own sake but as a leading member for all of its western allies among NATO, and most definitely, the EU, to defend the shared borders and to act as a defender of NATO and the EU’s shared values. However, nine full years after the start of the chaos and incredible human catastrophe in Syria, NATO at best is lukewarm toward supporting Turkey. Likewise, the EU at best ponders making out another bank cheque to hopefully silence any further criticism or demands. Yet, even those cheques would not be accepted by anyone outside the EU. When the cheque says "six" on it, its cashing-in value only amounts to "3.7" and comes with stringent rules attached. However, a public body should not to be confused with a loan shark or a high-end bank branch. In this instance, a credit lender would say I only give you money if you buy an SUV but not a lorry and so on and so forth. This clearly adds insult to injury.

Ankara did not break promises

Flashback – in the year 2016 things looked much more promising. While incredible human suffering continued across Turkey’s southern borders, at least the EU showed a willingness to not just financially reward Ankara for its efforts but to move forward in the political arena as well. Visa liberalization for up to six months for Turkish travelers for the Schengen zone was finally agreed upon, a modernization of the EU-Turkey custom’s union had been inked and a carefully tailored repatriation mechanism was put in place. The latter entailed that for all migrants and refugees entering the EU illegally without having first been processed by Turkish authorities and returned to Turkey by the EU, Ankara could send over a similar number of "legal" migrants and refugees to the EU, notably via Greece and Bulgaria to be then "distributed" among all other EU member states.
What this fact or fiction? It was more fiction, as we well know. Turkish citizens still have to pay a huge fee for obtaining a Schengen visa and often this is a one entry, short trip visa that cannot be reapplied for six months. Only two C-type visas can be obtained per person per any 12 month period, which makes it a cumbersome and particularly problematic for people with families in Europe, the business community and Turkish tourists intent on learning more about their European neighbors and fine nations – a deterrent to tourism per definition.
The modernization of the custom’s union has been shelved. The number of migrants and refugees who eventually managed to stay in the EU and have arrived via Turkey is less than 1% of the total number of refugees currently hosted by Turkey.
No further comment is necessary. This includes not mentioning another "fake" promise, namely the opening of new EU accession negotiation chapters in favor of Turkey speedily joining the bloc.
Money alone not enough

One cannot help but come to the conclusion that many in Europe’s corridors of power were hoping that by pumping money into Turkey, Ankara would happily continue to let in another million or even more refugees. By doing so, the issue of even a single innocent migrant or refugee trying to arrive in the EU could be ticked off as "highly unlikely." Secondly, whatever happens across Turkey’s southern border would in principle be Turkey’s problem, left to her own devices so to speak.
Luckily from a human rights perspective, Ankara has now pulled the emergency brake and made everyone clear that this strategy – if it ever was a strategy as some more cynically inclined analysts would describe it simply as a "no clue policy" – was a nonstarter.
Turkey continues to try to tackle the root cause of all of this human suffering by establishing a safe zone along parts of its southern borders and erase any terrorist network movement once and for all. This brings stability to at least large parts of this volatile region and makes certain Turkey and thus Europe and NATO’s southeastern borders are safe.
This includes coming to the conclusion that Moscow, although from a historical perspective never willing to abandon Damascus and its related sphere of influence, must realize that geopolitics are shifting. This means that the West must give Bashar Assad not only the cold shoulder but issue a stern warning that his way is not the just way forward.
Turkey has shown the way for how the crisis might be overcome. Will Brussels, the EU and NATO listen and above all else, join in?