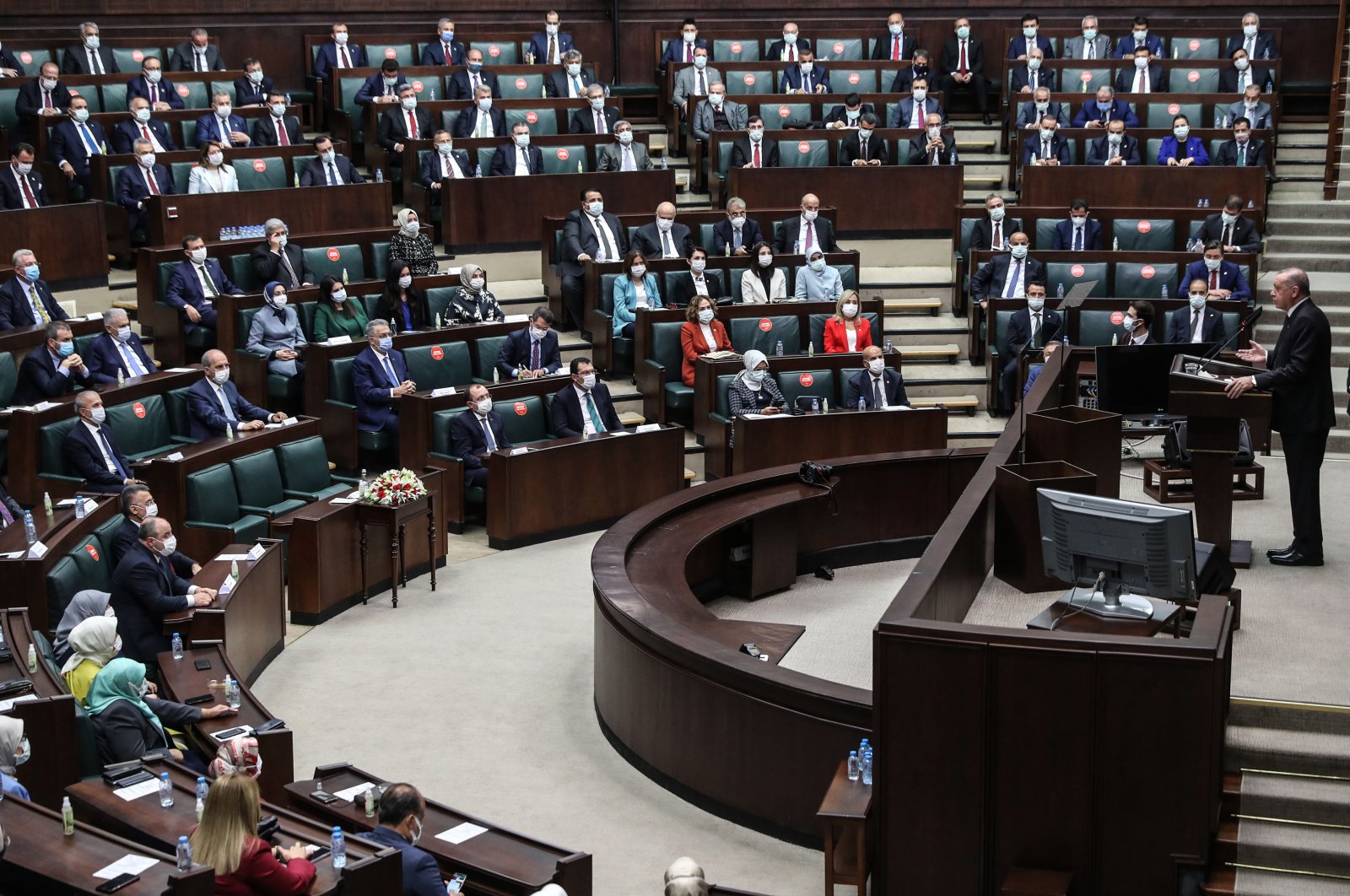 The Grand National Assembly of Turkey (TBMM) marks each legislative year with an inaugural speech by the president. The president outlines the nation’s legislative agenda and addresses major developments in domestic and international politics. This year President Recep Tayyip Erdoğan delivered his speech under the gloom of the COVID-19 pandemic.

Due to strict social distancing measures, ambassadors stationed in Turkey were missing from the aisles of the plenary session, along with many of the usual attendees. Though foreign dignitaries could not attend, Erdoğan devoted a large part of his speech to foreign policy. From the plenary hall Erdoğan reached out to foreign spectators and as the Turkish saying goes “inspired confidence in friends and fear in foes.”

Erdoğan’s emphasis on foreign policy comes as no surprise. While Turkey is never short of a lively domestic agenda, international and regional conflicts have increasingly been making headlines, with many of them happening in Turkey’s immediate vicinity. Most recently, Armenian aggression against Azerbaijan and Baku's heroic efforts at reclaiming rightful territory has hit close to home. The Turkish nation feels strongly about Azerbaijan, and this sentiment was echoed in the president’s speech.

Erdoğan’s focus on international affairs also exemplifies how far Turkey’s foreign policy has come under his tenure as prime minister and now as president. Turkey boasts 235 diplomatic missions across the globe, ranking sixth globally in the number of representations. Turkey’s aid and educational agencies, the Yunus Emre Institute (YEE) and Turkish Cooperation and Coordination Agency (TIKA), are a testament to Turkey’s ever-expanding soft power reach.

Turkey has come a long way from towing the Western line in foreign affairs to establishing a truly independent and sovereign foreign policy approach. In all major regional conflicts, Turkey maintains an independent position justified by political necessity and moral adherence to fairness in the international system.

On several occasions, Erdoğan remarked on how the international system built in the aftermath of World War II has become unsustainable. The U.N. system’s redundancy in the wake of major regional conflicts is a testament to this argument, exemplified in the president’s popular argument “the world is bigger than five” in reference to the makeup of the United Nations Security Council (UNSC).

The international system has failed to deliver in Libya, Yemen, Syria and most recently in the conflict between Armenia and Azerbaijan. In the lack of genuine multilateralism, competent actors that are party to such conflicts have sought solutions instead. Erdoğan recognized this failure in his speech in reference to the ineptitude of the Minsk Group set up by the Organization for Security and Co-operation in Europe's (OSCE) – comprising of France, Russia and the United States – in achieving a just solution to the Nagorno-Karabakh conflict.

Erdoğan criticized the Minsk Group’s call for an immediate cease-fire between Azerbaijan and Armenia, stating that the illegal Armenian annexation of the area has to end before such talks can proceed. The president’s speech seemed to echo Turkey’s own course of action in major regional conflicts – such as Syria and the Eastern Mediterranean – where Turkey has been the subject to calls by defunct international actors. Instead of appeasement, Turkey has rearranged the facts on the ground in a more just manner, and Azerbaijan is now attempting the same.

Four key regional topics dominated the president’s speech: the fight against terrorism in Syria and Iraq, the Eastern Mediterranean, the status of Jerusalem and the politics of the Gulf. The first two issues have dominated public discussion in Turkey for several months now, and it is unsurprising that the president took time to consider Turkey’s achievements in eliminating the threat of PKK terrorism in Syria and Iraq and success in retaining sovereign rights in the Eastern Mediterranean. More strikingly on Jerusalem and the Gulf, the president’s comments point to areas of interest for Turkey and possible new venues for the projection of Turkish foreign policy.

Regarding Jerusalem the president remarked on the Ottoman past of the city, citing how much of the city’s current architectural landscape is the product of the reign of Sultan Suleiman the Magnificent. And thus, the president called Jerusalem “our city," emphasizing its significance for Turkey from a point legitimized by history. Right-wing Zionist commentators in Israel and the United States were quick to criticize these comments as expansionist or hostile. Such analyses are void of history and are steeped in arrogance which sees only an Israeli reality for the city.

With respect to the Gulf, the president’s speech touched on the passing of Emir Sabah al-Ahmad al-Jaber al-Sabah, the Kuwaiti Emir and an experienced statesman in the region. While reminiscing on the role the late emir had played in resolving regional disputes and remaining neutral in the rift in the Gulf Cooperation Council (GCC), Erdoğan took aim at countries in the Gulf that have been in open hostility against Turkey. Though the president did not name any countries, he was referring to the United Arab Emirates (UAE) and to a lesser extent to Saudi Arabia, both of which have emerged as Turkey's regional adversaries.

Abu Dhabi and Riyadh openly voice opposition to Turkey’s footprint in the region, and their rhetoric has become far more acute in recent months. Despite Saudi and Emirati opposition, the Gulf continues to dominate Turkey’s strategic thinking. Ankara’s relationship with Doha is being maintained at the highest echelons of the military, with joint Turkish-Qatari endeavors steering the conflict in Libya. Indeed, Turkey also boasts strong ties with Kuwait and Oman, two nations that have refused to join the Saudi lead embargo on Qatar. Turkey’s relationship with friendly countries in the Gulf, as well as attempts to balance UAE and Saudi Arabia, have become part of Ankara’s regional strategy.

One sure conclusion that can be made from Erdoğan’s address to the Parliament is that Turkey has a strong interest in the conflicts in its immediate vicinity. A testament to Turkey’s emerging role as a regional leader, Erdoğan remained steadfast in delivering Turkey’s foreign policy rationale for the future. Turkey’s proactive role in the region will undoubtedly continue to grow.