France is no longer gendarmerie of Sahel 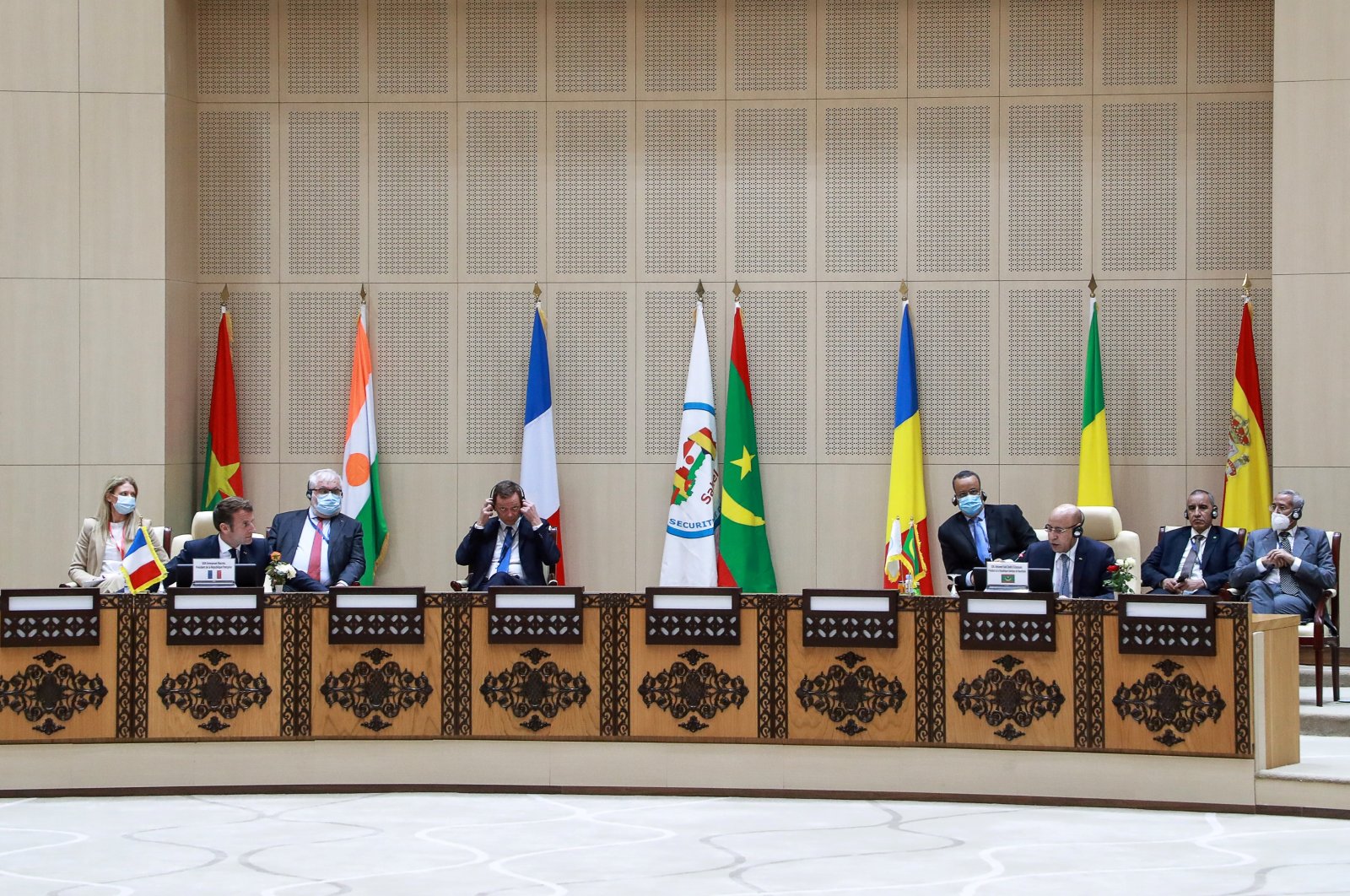 In an effort to “establish law and order” in Mali, French President Emmanuel Macron, like his predecessor President François Hollande, is acting as commander-in-chief. On his inaugural day in May 2017, Macron visited French troops in Mali just like when Hollande ordered Operation Serval in January 2013, which was a bombing mission against armed terrorist groups based throughout the Sahara region.

After ending lockdown measures against the COVID-19 pandemic, Macron's first trip outside of Europe was to Mauritania, where the French president met with the leaders of the members of the G-5 Sahel group (Burkina Faso, Chad, Mali, Mauritania and Niger) to discuss the ongoing fight against armed militias.

In spite of Operation Serval's initial success in 2013, the French intervention in the region has now reached an impasse. The already complex situation is further complicated by France’s status as a former colonizer operating in the area. This distinction will influence long-term engagement between local communities, French troops and armed terrorist groups.

There are many significant developments that serve to turn the Sahel region into a battleground in the fight against violence and radical non-state formations. For instance, the growing instability after the military coup against President Ibrahim Boubacar Keïta in Mali, the latest terrorist attack on some French aid workers in northern Niger, the enduring presence of Boko Haram terrorists in Nigeria and notorious Daesh's territorial loss in Iraq and Syria.

In the wake of terrorist attacks in 2015 in the capital Paris and 2016 in Nice, France increased operations in the region. The mindset behind the operational initiatives lies behind the words of French Prime Minister Jean Castex. “It’s very likely the same hatred, the same cowardice, the same inhumanity that was at work in Niger and at the Bataclan (a music hall targeted by a terrorist attack in Paris in 2015),” Castex said when commenting on the French operations.

Time has proven that Operation Serval was only temporarily successful, as it did little to contribute to the overall stabilization and restoration of the Malian state authority. It is commonly known that security in Mali is at its worst since 2014. As a matter of fact, France’s decision to launch Operation Barkhane in 2014 confirmed that Operation Serval, despite its strengths, had failed to address the underlying causes of the Malian conflict.

Unlike the failed Operation Serval, which fielded small, highly flexible forces that were tailored to the specific political goals of the intervention, Operation Barkhane reflected a much broader regional counterterrorism effort.

The declared aims of the operation were carefully aligned to those of the G-5 Sahel group and emphasized the need for capacity building that would enable local partners to secure their own safety independently. This close coordination with local state actors in the region signified a clear departure from the functional independence of Operation Serval.

Operation Barkhane had some notable achievements in terms of both hard and soft power but what constitutes success at a broader strategic level still remains unclear.

The wide-ranging aims of the current engagement are ambiguous and ill-defined, ultimately rendering France’s departure an uncertain prospect. This vagueness, when viewed alongside the complexity of the region, is a clear indicator of the impasse that lies immediately ahead of French forces.

The 2019 helicopter crash in northern Mali that killed 13 French soldiers, the biggest single-day loss for their military in nearly four decades, caused a further blow to troop morale for an operation that already faced severe criticism from the G-5 Sahel members. The French soldiers’ assassination of al-Qaida in the Islamic Maghreb (AQIM) leader Algerian Abdelmalek Droukdal, however, boosted the troops' spirit and increased Paris’s reputation in the war on terror.

Recently, eight aid workers from the Agency for Technical Cooperation and Development (ACTED), a French nongovernmental organization (NGO), and their guide were killed by armed men in a deadly attack in northern Niger. The French government immediately called it a terrorist attack. In a somber speech at an airport lounge in Paris Orly Airport, Castex said that "the victims came to Niger to do good, and they met evil.”

News reports from Mali highlight that, in the post-Operation Serval period, questions have been raised about Mali’s ongoing dependence upon the French state and Operation Barkhane’s neocolonial impacts on the entire region.

Similarly, the recent protests in Mali prove that anti-French sentiment has peaked in certain portions of the local and Nigerian populations.

Although Operation Barkhane’s overall contribution to the stability in the Sahel region is yet unclear, France’s military commitment remains steadfast.

When viewed in the context of its historic engagement with the area, the implications of a permanent French presence are vast. As such, a nuanced understanding of the different narratives will be increasingly important in determining whether the intervention is ultimately regarded as a success or failure.

Now, after French troops engaged the AQIM in northern Mali, Paris took over military control of the country.

After having defeated the invaders, chasing them out of the province of Timbuktu and other northern cities and disarming factions of the rebellions, the French military banned the Malian army from Kidal, the central city of the northern Azawad region. The territory is claimed by different rebel groups, but it is under the de facto control of the National Movement for the Liberation of Azawad (MNLA). France allowed the rebels to occupy the area, reorganize and later gain a place at the post-war negotiations table.

France realized that they could no longer afford the military costs of the Malian war and persuaded the United Nations to send peacekeepers to the country. In December 2013, Paris announced a 60% reduction in its troops deployed in Mali to 1,000 by March 2014.

Some interim peace deals were agreed to but then quickly broken. By August 2016, attacks continued on foreign forces. More than 100 peacekeepers have died since the U.N. mission's deployment in Mali in 2013, making it one of the deadliest places the international organization serves.

Like in many other African regions, the Sahel territorial boundaries were drawn in order to benefit the interests of colonizing countries rather than taking into account social and ethnic cohesion or the needs of the peoples concerned. The post-colonial borders in nations such as Mali, Niger, Libya, Chad and Sudan cut directly through clans and ethnic groups.

These ethnic ties across the region, however, contributed to the development of networks that now provide important economic opportunities, including the cross-border smuggling of migrants. In this context, the Sahel is increasingly a direct threat to neighboring countries’ national security, like Algeria, which has become a transit hub for migrants crossing into Europe, through the large-scale use of violence, illicit cross-border flows and the limited stability of failed states like Mali and Libya.

The European Union’s interests in the Sahel region are historically shaped by economic and security questions alike. Whereas most of the countries in the area are too small or too poor to become important markets for the EU, they do hold wealth in terms of natural resources. For instance, about 70% of Libya’s oil production used to flow to Europe, while three-quarters of France’s energy comes from uranium mines in northern Niger.

France is indeed one of the most active EU countries in the Sahel by virtue of its historic, colonial ties to the region, yet it is no longer the gendarmerie of it.

Since the 2011 Arab uprisings, the fall of the toppled autocrat Moammar Gadhafi’s regime in Libya and the beginning of the Malian conflict in 2012, the Sahel region has been increasingly perceived by the international community as a focal area for activities of radical armed groups such as the AQIM, Ansar al-Din Front, the Movement for Oneness and Jihad in West Africa (MUJAO) and Boko Haram. Thus, from a security point of view, the Sahel region has become a laboratory for experiments in “light-touch” counterterrorism for Western powers.