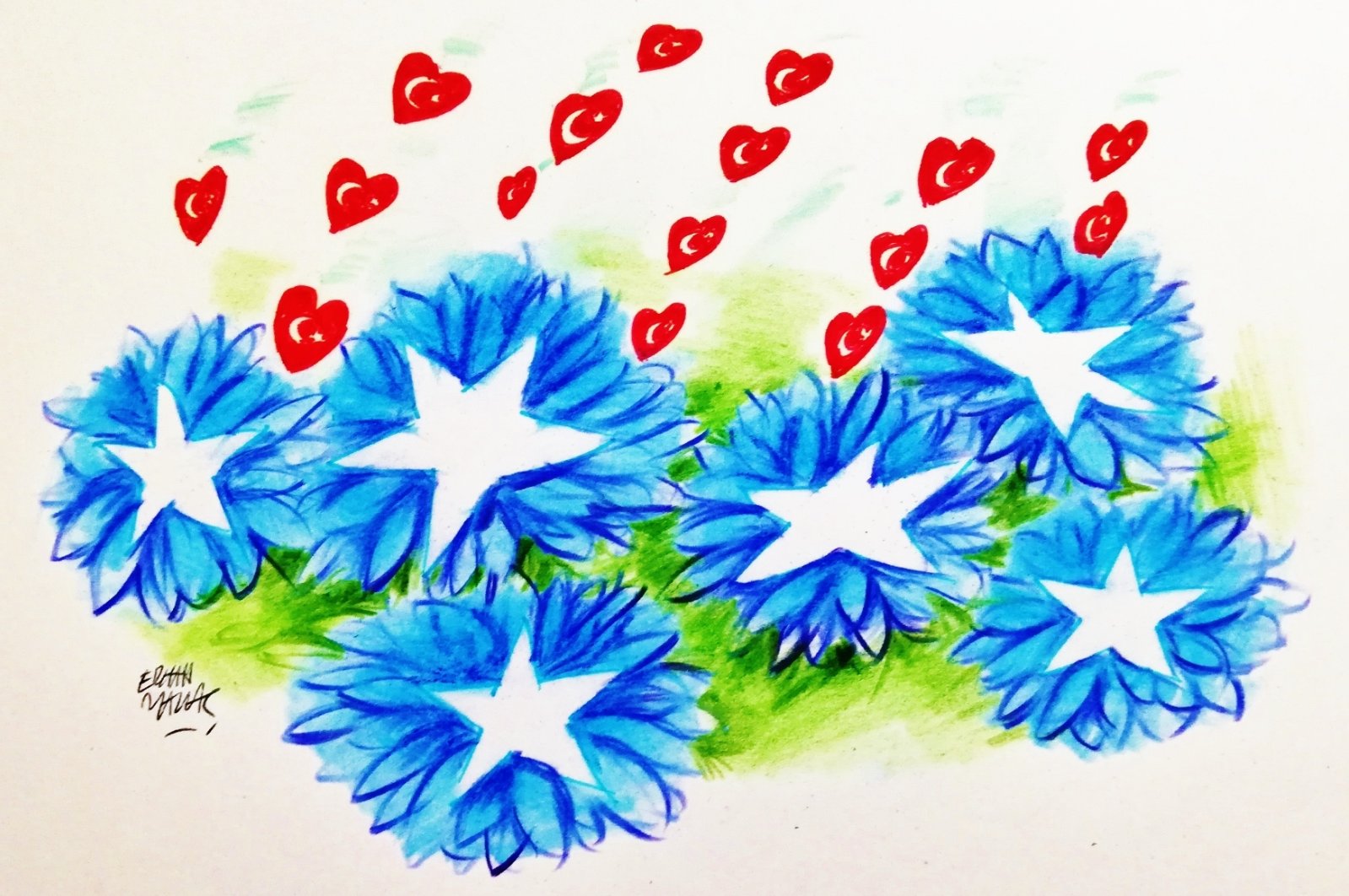 In the last decade, Somalia has made remarkable progress on multiple fronts: good governance, security, the economy and the military system. Somalia is opening its waters to exploration as it seeks to become a regional economic hub. Some studies suggest that the seafloor beneath Somalia’s coastal waters may contain up to 100 billion barrels of oil. Thus, foreign investors have shown considerable interest in Somalia’s oil and gas resources.

Turkey, a partner and a close ally of Somalia, could be joining the race to explore the oil deposits along Somalia’s Indian Ocean coast. On Jan. 20, President Recep Tayyip Erdoğan said that Turkey had received an invitation from Somalia to explore for oil in its seas. The news has been greeted with much optimism by many, particularly the Somali people.

Turkey’s humanitarian diplomacy has won the hearts and the minds of Somali people. Since then-Prime Minister Erdoğan’s first visit to Somalia in 2011, Turkey has poured millions of dollars of aid into Somalia, supporting health, education, infrastructure, military rebuilding and peace building.

On the other hand, Turkey-Somalia relations are also based on economic cooperation and trade. Turkey has arguably shifted the donor-recipient paradigm to a win-win development. According to the Turkish Foreign Ministry, the bilateral trade volume between Turkey and Somalia increased from $144 million (TL 1 billion) in 2017 to $187 million in 2018, and $206 million in the first 10 months of 2019. It is worth mentioning that the relationship between Somalia and Turkey dates as far back as the 16th century and is based on mutual interest and shared values.

The history of oil exploration in Somalia dates back to the early 1950s when Agip (now known as Eni) and Sinclair Oil Corporation carried out geological studies. In the late 1980s, companies including Conoco, Chevron and Shell were awarded exploration licenses. However, when Somalia plunged into civil war in 1991, those oil companies which bought oil blocks declared force majeure on their operations.

In recent years, a number of seismic studies concluded that Somalia has oil and gas reserves offshore worth extracting. Spectrum’s findings indicate that there is a high potential for hydrocarbon exploration in offshore Somalia. Neil Hodgson, executive vice president of geoscience at Spectrum said, “Analysis is suggesting offshore Somalia stands as a beacon on the East African margin, offering the potential for the next giant oil discoveries in the future.”

As a result, the last few years have witnessed a growing interest in Somalia’s offshore oil and gas resources. Last June, the Ministry of Petroleum and Mineral Resources of Somalia reached an agreement with the Shell and ExxonMobil joint venture to repay the rental fees of $1.7 million for offshore blocks from 1990 to 2008. While there are high hopes for oil discovery in Somalia, there is an equally long list of challenges.

Violent extremism is still a serious threat to peace and stability in Somalia. On Dec. 28, 2019, a suicide car-bombing at a busy junction in Mogadishu killed 79 people, including two Turkish citizens.

There is endemic corruption in Somalia, especially in politics. It is a severe impediment to the economic and social development of the country. According to Transparency International’s 2019 Corruption Perceptions Index (CPI) report, Somalia is the 180th least corrupt nation out of 180 countries.

After the fall of the Somali state in 1991, the country has become a breeding ground for external competing forces whose malign motives have destroyed the country – hazardous waste dumping, weapon trafficking, illegal fishing, the geopolitics of the region, etc. Somalia has endured a prolonged period of commercialized anarchy. But things are gradually changing for the better in Somalia, thanks to the current Federal Government of Somalia (FGS) and its international partners.

Despite the challenges, Somalia is a country full of hope and bright prospects for the future. It offers plenty of opportunities. Somalia boasts the longest coastline in Africa (3,300 km) and untapped natural resources. It is located in a very strategic place, as a gate to the Red Sea and the Gulf of Aden. Moreover, there are more than 2 million Somalis who live in the diaspora. They send around $2 billion of remittances back home annually – an economic lifeline for the conflict-ridden country. They also send back social remittances-skills, expert knowledge, etc.

The big caveat, though, is unless the necessary preconditions for Somalia’s oil discovery – such as stability, regulatory and accountability – are met, success is far from guaranteed, or perhaps it may trigger more violence, corruption (rent-seeking) and continued poverty. So, what has Somalia’s government done to tackle the above-mentioned challenges?

Indeed, the FGS has taken some significant steps that are critical for building effective political and social institutions and more specifically for offshore oil and gas reserves to be exploited most effectively. With the support of international partners, the government has undertaken security sector reforms. Efforts are now underway to transfer security responsibilities from the African Union Mission in Somalia (AMISOM) to the Somali National Army.

In terms of policies and regulatory frameworks, major new laws were passed that include a petroleum law, anti-corruption law and new election law which is based on “one person, one vote,” replacing the controversial clan-based electoral system. On Feb. 8, President Mohamed Abdullahi Farmajo signed the landmark petroleum legislation into law – an important piece of legislation that safeguards the revenue sharing agreement between the federal government and the states as well as the environment. It has removed major barriers to exploration. Additionally, the president signed anti-corruption and new election legislation into law in September 2019 and February 2020, respectively.

Moreover, the FGS has pushed through financial and economic reforms that will pave the way for Somalia’s $5 billion debt cancelations. Following the meetings of the executive boards of the International Monetary Fund (IMF) and World Bank, on Feb. 12 and 13, respectively, Somalia was commended for its strong commitment to reform and rebuilding key economic institutions. "Today’s agreement by the IMF Executive Board that Somalia can be eligible for debt relief under the Enhanced HIPC Initiative marks a historic moment,” said Kristalina Georgieva, managing director and acting chair of the IMF. World Bank Group President David Malpass also said, “Today was an important step toward Somalia resuming financing from international financial institutions.”

So, will Turkey venture into this new territory of offshore drilling in Somalia, and what are the implications? Indeed, Turkey will accept Somalia’s invitation for two reasons: Firstly, Turkey has a no-strings-attached policy and unwavering support for the fellow Muslim country. Turkey is in Somalia to show solidarity with the brothers and sisters of Somalia. Turkey has reiterated many times that this is not just for one day and it will continue to work for its brothers and sisters and will never abandon them. That pledge has been fulfilled. And, arguably, Turkey has succeeded where many other foreign backers and NGOs have failed before. Today, Turkey provides a great deal of infrastructure development and technical assistance to Somalia. Trade and economic cooperation between the two countries is also rapidly growing.

Secondly, as an emerging and industrialized economy, Turkey needs the natural resources of Africa. Hence in 2005, Turkey launched the Open to Africa policy which aims to increase economic and strategic relations with African countries. According to Anadolu Agency (AA), “Turkey’s bilateral trade volume with Africa increased threefold from 2003 to reach $18.8 billion in 2017, as exports totaled $11.6 billion and imports $7.1 billion.”

Is the risk of Somalia’s oil exploration worth the reward? The Somalia stakes are high due to the country’s rich abundance of oil and non-petroleum mineral wealth. The success of Turkey’s engagement with Somalia can be partly attributed to the risk-taking factor. Despite the security challenges, the Turkish government and Turkish nongovernmental organizations and businesses have expanded their aid and business operations to many parts of Somalia. From this perspective, Turkey has a comparative advantage in discovering Somalia’s oil first. Oil discovery in Somalia could help transform Somalia's economy and play a big role in Turkey’s energy security and investment opportunities.

Meanwhile many oil interests, including Western oil companies who have legacy oil contracts signed before the civil war in 1991, have recently turned their sights on Somalia’s potential oil and gas resources. This next great oil frontier will create fierce competition that will bring many benefits to the Somali people. However, as evidently seen in many parts of Africa and developing countries, resource richness can be a curse rather than a blessing. Good governance is the only answer to the challenges of the resource curse.

* Activist, freelance writer and documentary filmmaker based in Northampton, U.K.

Activist, freelance writer and documentary filmmaker based in the U.K.
RECOMMENDED