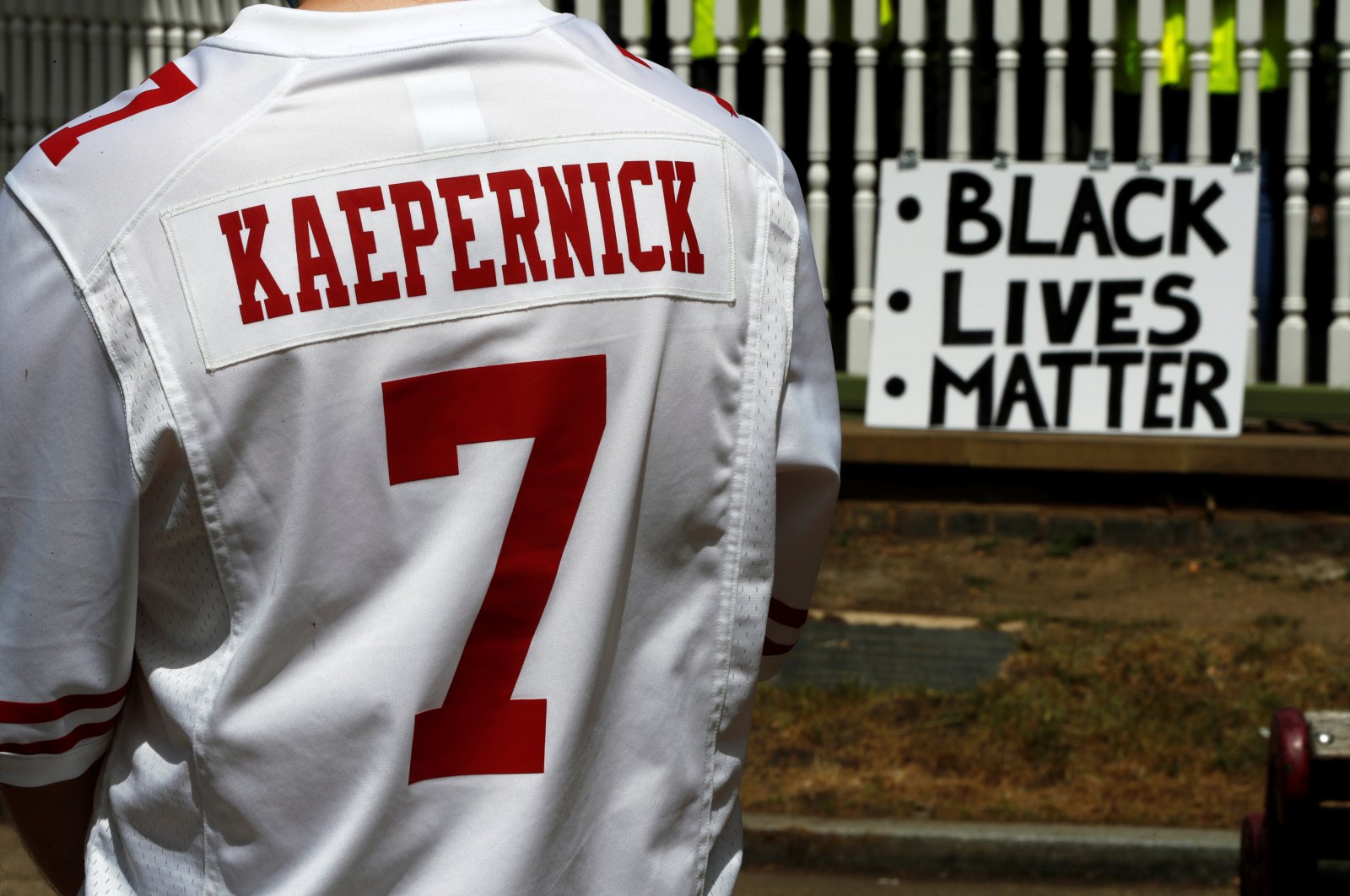 When civility leads to death,

Revolting is the only logical reaction.

The cries of peace will rain down,

And when they do, they will land on deaf ears,

Because your violence has brought this resistance.

We have the right to fight back.

In 2016, American football player, Colin Kaepernick peacefully protested against the systematic racism which has been inflicted upon African Americans for centuries by kneeling during the national anthem before games. For this reason alone, he lost his job, and all of the National Football League (NFL) owners refused to sign him on as a result. President Donald Trump decided to put salt on the wound and called him a traitor.

Fast forward to 2020, after the horrific murder of George Floyd by a police officer, which has led to global, mass anti-racism protests against police brutality against black people, “Taking the Knee” has become the symbolic act, the hand to the heart, the salute, to the cause of Black Lives Matter. Recently, we have seen Canadian Prime Minister Justin Trudeau and some members of his Cabinet, the U.S. Congress and law enforcement officers taking the knee in solidarity with the protestors, in a show of empathy and a “righting the centuries of wrongs” effort.

By now, there are very few people around the world who have not yet watched in horror the footage of the cold-blooded murder of George Floyd which was committed by a white law enforcement officer. That gruesome video could have very well been from the pre-civil rights era when the Klu Klux Klan and other white supremacists regularly and openly lynched black people. When Kaepernick tried to tell society, more specifically white society, that the anti-African American racism virus has not been obliterated from the country and in fact, remains very much alive and well like a shameful stain of disgrace, when all he did was rightfully and peacefully protest this inequality, he was shamed and disgraced by the nation’s national football league and highest office. That is absurd, unjust inequality.

In 2020, in a first-world country, in the wealthiest nation in the world, we have all witnessed the life of an African American man slowly squeezed out of him by the white knee of a law enforcement officer, from the institution which proudly displays its motto as “To protect and to serve.” It is the same institution that survives on taxpayers’ dollars to protect and to serve all Americans of all colors, religions, races, cultures and political affiliations but has been systematically racially profiling African American males for decades. In recent years, this phenomenon has increased undoubtedly because of police impunity and a system that is clearly heavily tilted toward the white end of the spectrum. The demonization and vilification of black people, particularly males, has become an undeniable and rampant societal disease. On the facade, “the land of the free and home of the brave” was inwardly harboring beliefs that this is the case unless the conversation is about certain darker demographics that are cherry-picked to downtrod upon.

The symbol of a white police officer taking the knee, not to express solidarity with the black community, but rather, to suffocate a black person to death with it, in broad daylight, on the street, with countless witnesses who were filming, and the absolute lack of any humanity displayed by him and the other officers, clearly reflects that corruption and impunity not only exist but are very much at play. According to CNBC, in 99% of killings by the police between 2013 and 2019, officers were not charged for their crimes, after having killed nearly 7,666 people. This number disproportionately affects African Americans. Despite only making up 13% of the U.S. population, black Americans are 2 1/2 times as likely as white Americans to be killed by the police. But, there is no police accountability.

On May 25, 2020, for a full 8 minutes and 46 seconds, a white police officer’s knee remained on an innocent black human being’s neck and his pleading for air fell on deaf ears. The pleading of the crowd that had gathered made no difference. We saw with our own eyes what white privilege looks like, what impunity within law enforcement looks like, what racism looks like in cold blood. We saw its hideousness, we felt heartbroken and deeply saddened and angry by it.

Perhaps former officer Derek Chauvin believed his heinous act would, of course, not amount to anything and that he was just doing white society a favor, but his killing of Floyd was the drop that made the glass overflow. We have seen global protests and the heartening footage of not only black but a large percentage of white protestors, too. That is the light at the end of the tunnel, the sign that things are beginning to change, that we have a generation of people who love and respect other human beings irrespective of color. That is our only hope forward. That is the best hope forward.

Politically, the mindset will not change sufficiently among particularly the Republican Party to counter all the evils of discrimination and make them right. That is not how right-wing politicians roll. When even the Democratic nominee for president Joe Biden, declares that not only will he not allow defunding the police, he would need $300 million of taxpayers’ money to “reshape police departments,” whatever that means.

The bottom line is, whatever the politicians say and do or don’t say or do, the ultimate power of change lies with the people; it always has. We vote our lawmakers in and out and a lawmaker would have to live under a rock to not comprehend that today’s voters are much more aware in general and in particular about the wide gulf between the haves and have nots and they decide which lawmakers stay and which ones go.

After all the taking knees and photo ops with Floyd’s family, what we want, need and expect is change, not a status quo, but real changes in policies, hearts and minds.

To reiterate the words of Kaepernick: “Your violence has brought this resistance.” Only love and compassion will make it stop.