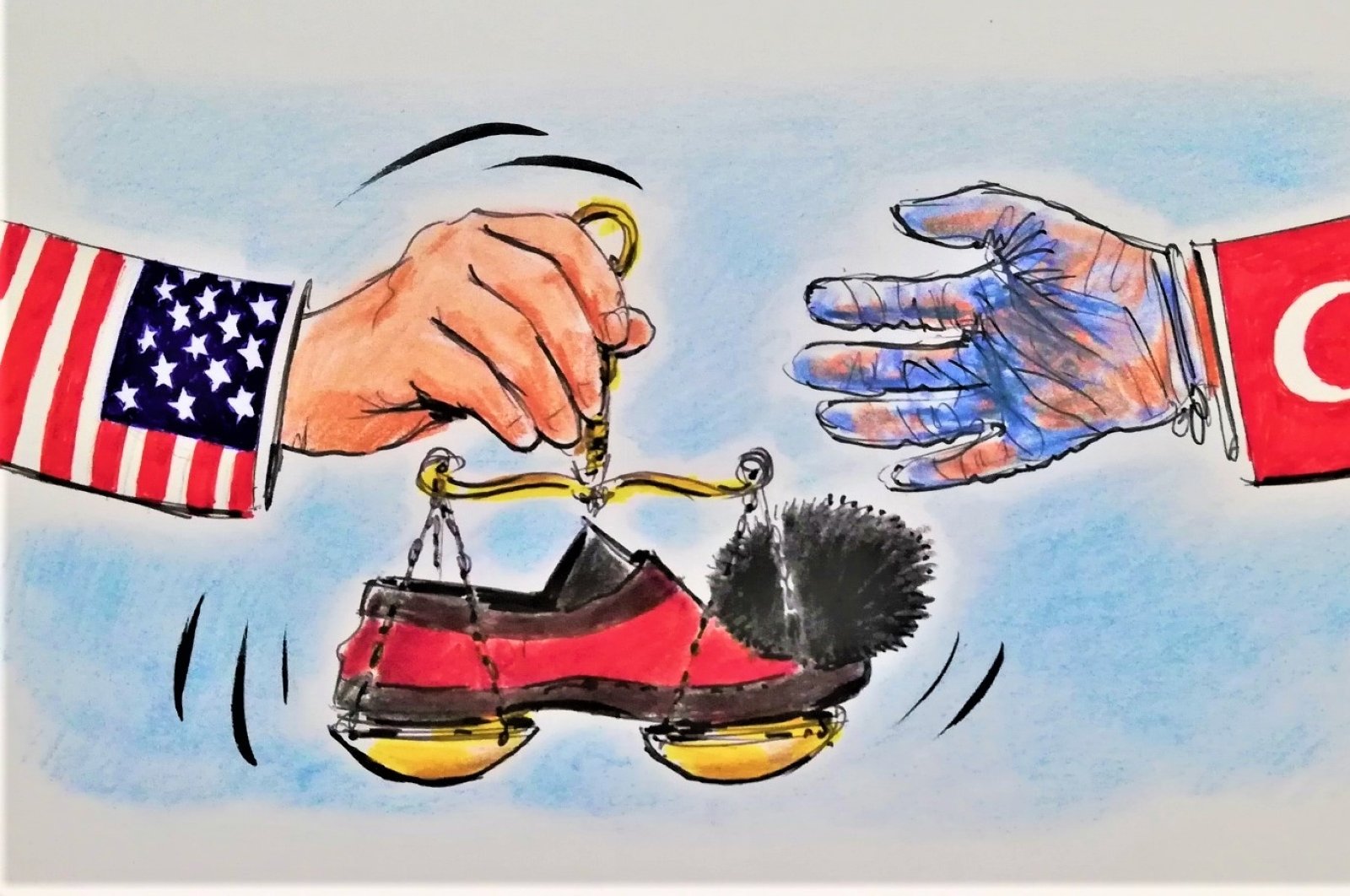 After the erosion of the global power structure in the wake of the Iron Curtain's fall in 1989, the world began to reshape itself. Thus, the bipolar international system changed and is still changing into a multipolar one, while the superpower United States threatens to further erode the situation. New actors like China, India, Brazil, Russia (as a non-communist state) and regional actors like Turkey, Iran and others are taking their place on the stage of global (or regional) political events.

The U.S. has lost its influence in large parts of the Far East, primarily due to the sharp, initially inconspicuous peaceful rise of China, the main threat to its status as a global superpower.

In Europe, the U.S. has mostly lost the influence it once had built up through the Marshall Plan and the military establishment in and around Germany after the collapse of the Nazi Reich. Hence, in the Iraqi and Syrian war, as well as in Libya, the U.S. has received little support from Europe. Because of this, France has always tried to turn the European Union into a counter-player to the U.S. (not only economically but also politically and militarily) in order to minimize its influence in Europe and impose a test of strength.

The Permanent Structured Organization (PESCO), which officially launched in 2018 to set the EU's collective security and defense policy, is the first step in that direction. In the upcoming years, PESCO will not only provide strategic cooperation in security and defense matters but will also help to establish a single European army to maintain the integrity and security of the EU as well as its neighbor states and to act as a deterrent against other major powers (in the sense of force measurement). So, with a European army, the U.S.' significant military influence, which exists above all in security and thus political matters through NATO, can be removed entirely.

US attempts to save power

This derivation leads to the real issue: in order to secure its influence worldwide and above all in Europe, the U.S. is trying to ally itself with countries, or at least give substantial financial support to those countries which have been neglected by the EU for many years – like almost the entire Balkan region, or those who at least feel neglected, like Greece and the Greek Cypriot administration.

The Greek Cypriot administration could have been admitted to the EU in 2004 and could get more support from the EU regarding its crisis with Turkey over a variety of long-standing disputes, including rights in the Eastern Mediterranean. However, due to both its financial weakness and pressure from Greece, it has failed to conclude negotiation talks to resolve the crisis with Turkey.

For example, at the Berlin conference on the Libyan conflict in January, the Greek Cypriot administration was not even invited, which has a plausible reason.

The EU, Germany and Italy know that a solution without Turkey is unrealistic in Libya, so Turkey was invited to the conference and played a decisive role in finding a solution. Today, it is supporting the U.N.-backed government in Tripoli with military and financial aid and has celebrated great successes to date. However, Greece and the Greek Cypriot administration, together with France, which has a different strategy than Germany and Italy in the Eastern Mediterranean (EastMed) as a former colonial ruler, are trying to restrict Turkey's rights in the Mediterranean and the island of Cyprus (For details, please consult my article of April 1, 2020).

Thus, the Turkey-Libya agreement, Turkish maneuvers in the EastMed, natural gas exploration activities in Turkish Cypriot territories and the Cyprus conflict are under continuous criticism. However, the criticisms are not baseless, as the division of the island and the Turkish research activities around Cyprus are also in conformity with international (maritime) law (see also my previous articles in which applicable paragraphs are disclosed).

Nevertheless, this is where the U.S. comes in. Although France is continuously supporting Greece as well as Greek Cyprus, it is calling for more stringent action and higher sanctions against Turkey and is sending warships to the island of Cyprus. However, the situation is different concerning the U.S.

The U.S. welcomes the Greek Cypriot calls for help in the Eastern Mediterranean and the Aegean Sea, which will enable it to strengthen its influence in the region and at the same time, legitimize it. Above all, this is also important because it enables them to increase their influence close to Russia and Turkey. It is important to note here that Turkey has increasingly distanced itself geopolitically from the U.S. in recent years and is pursuing a different strategy in the region with Russia, Qatar, Iran and increasingly, Pakistan.

The differences in northern Syria regarding the PKK/YPG terrorist group are not the only reason for the deterioration of U.S.-Turkey relations. The issue of Russian S-400 missiles, the U.S.’ temporary but wide-ranging economic sanctions and Turkey’s exclusion from F-35 jet production are the major crises.

Besides them, there are also some reasons such as the presumption of closing U.S. bases in Turkey and the lifting of the U.S. arms embargo against Southern Cyprus, as well as the establishment of a U.S. military base in the south of Cyprus.

However, that is not all. Now the situation in the Aegean and Western Thrace is also coming to the forefront.

The U.S. condemns the Mediterranean navigational telex (NAVTEX) of the Turkish Navy around Kastellorizo (Meis)– one of the smallest Greek islands in the Aegean Sea and only 2 kilometers away from the Turkish coast. It also condemns Cyprus for the crisis. Meanwhile, the U.S. demands that Turkey end its natural gas research activities in Turkish territories in the Eastern Mediterranean and the Aegean Sea. The reasoning behind the U.S. demand, according to Washington, is that those Turkish seas belong to Greece.

Washington's take is that even the smallest Greek islands would have territories, but this is not the case under international maritime law.

In recent months, the U.S., under the veil of NATO military exercises, has transferred weapons and personnel to the Greek province of Alexandroupolis (Dedeağaç). It is important to note that this region, namely Western Thrace, has a high number of Turkish minorities who enjoy protection in Greece under the Treaty of Lausanne (1923). However, their rights have not yet been respected by Greece, which describes the Turks living in Western Thrace (who already lived there in the Ottoman Empire and were not forcibly resettled in Turkey as a result of a population exchange) as a Greek Muslim minority.

Thus, Athens plans to weaken their emotional ties to Turkey and reduce Ankara's influence domestically. However, through the Treaty of Lausanne and the Zurich and London Treaties (1959/1960) for the Cypriot Turks, Turkey also has the status of guarantor power for the Western Thrace Turks, so that all political developments related to them are of particular interest to Turkey. At this point, however, the U.S. acts as an auxiliary rescuer and provocateur to emotionally and physically remove the Turks from their home country.

Since the U.S. plans to create a permanent military base in Alexandroupolis (in Western Thrace), they want to acquire the port located there by privatization and thus convert it into a military base. So, on the one hand, the U.S. wants to create a buffer zone 30 kilometers from the Turkish border, as was also intended in northern Syria at the time, to deter Turkey from using its rights in the region with a military presence, so that U.S. influence on Turkey can be (re)established, which it did not succeed in doing in northern Syria. On the other hand, a military port in the region would give the U.S. a geostrategic advantage in the Black Sea and, thus, over Russia.

Furthermore, the intended artificial buffer zone would also help to physically distance the Western Thrace Turks, who are mostly living in Kavala, Komotini (Gümülcine) and Xanthi (İskeçe), from Turkey and thus eliminate Turkish influence in Greece (as was also attempted in Cyprus in 1974), which has been successively addressed for 100 years now.

However, what speaks against the implementation of a permanent U.S. naval base in Alexandroupolis (even if unofficially, since it is only to be acquired through private-state acquisition) is that Article 1 of the III Convention Respecting the Thracian Frontier (Treaty of Lausanne, 1923) stipulates that a 30-kilometer strip of land on each side of the border between Turkey and Greece must be demilitarized.

Since Alexandroupolis lies within this sphere of action, implementation would, at the very least, be contrary to the treaty and could thus continue to cause a significantly increased potential for conflict in the region.

It is also striking that the area around Alexandroupolis is considered to be particularly rich in natural resources, and the indigenous Turks, as in the example of natural gas around Cyprus, are not allowed to participate in its wealth.

As a consequence, it is clear from the comments that Greece continues to play with fire by giving the U.S. a wide-ranging influence in the region, which it may also later regret for geostrategic reasons. The militarization of Western Thrace and Cyprus (which has already taken place) will not counterbalance the Turkish presence on the ground but will only drastically increase the potential for conflict.

There is one thing Greece does not understand: Turkey is not acting against international law but rather, is making use of its natural rights under treaties and international (maritime) law. On the other hand, Greece is acting in violation of treaties or law through its disproportionate actions in the Eastern Mediterranean, the Aegean Sea (also by militarizing islands near the Turkish coast which was not mentioned above and is forbidden due to the Treaty of Lausanne as well) and in Western Thrace, thus becoming itself an "illegal actor" in the region, which it attributes to Turkey.

Furthermore, if one considers that Greece has put the flags at half-mast due to the reopening of Hagia Sophia for Muslim worship and that some opinion leaders have burned the Turkish flag due to the Turkish presence in the EastMed, the extent of the ridiculousness becomes particularly evident.

*Master of Arts at Friedrich Alexander University in Erlangen, Germany