How can we make the most of our time in self-isolation? 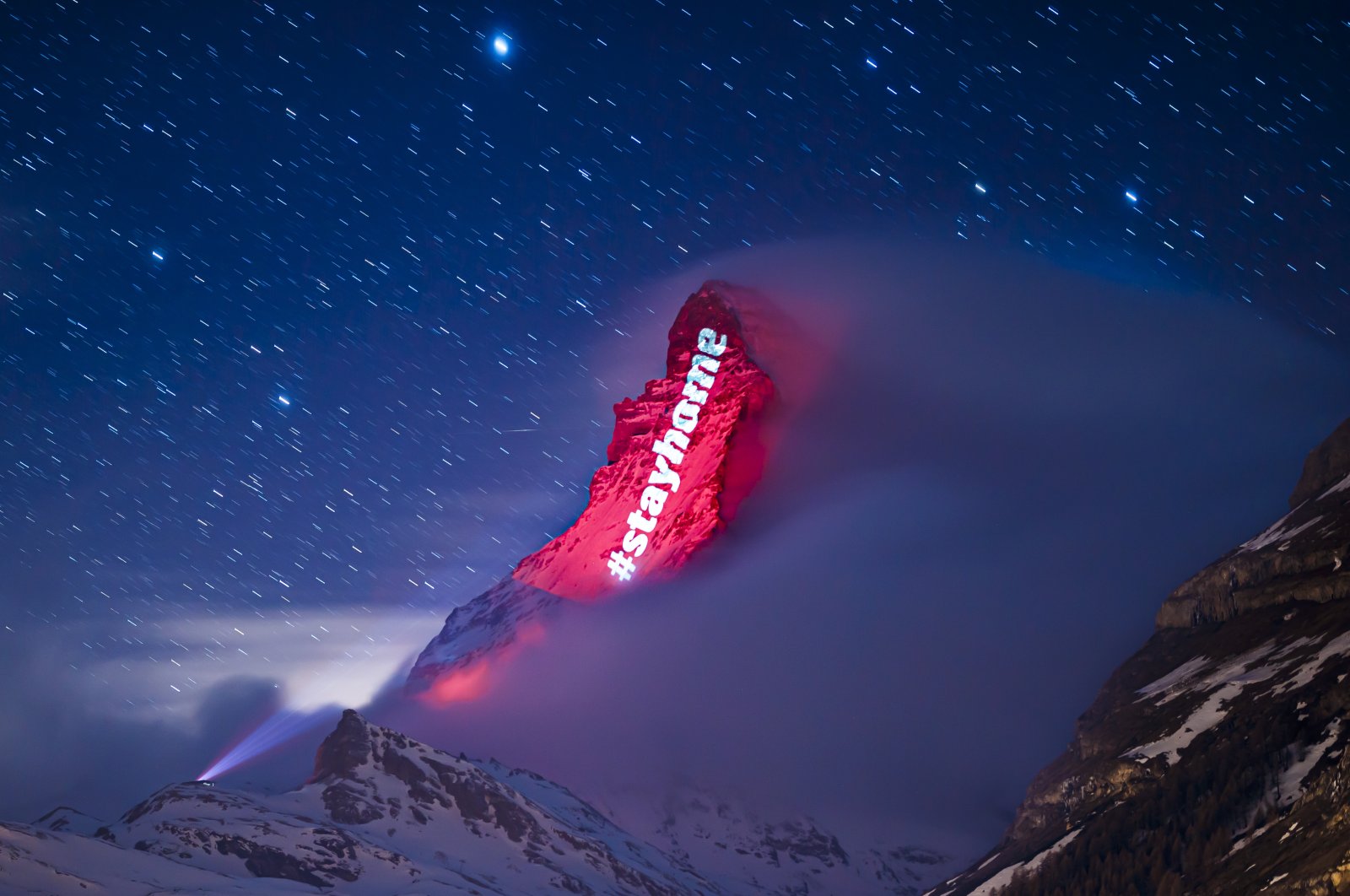 The iconic Matterhorn mountain is illuminated by Swiss light artist Gerry Hofstetter aiming to send messages of hope, support and solidarity to the ones sufferings from the global coronavirus disease, in the alpine resort of Zermatt, Switzerland, Thursday, March 26, 2020. (AP Photo)
by Adem İnce Mar 31, 2020 12:05 am
RECOMMENDED

As the new coronavirus disease continuously spreads across the world, governments in many countries are forced to take dramatic actions such as the declaration of curfews, making people stay indoors to prevent the deadly disease from spreading further. In other countries with no curfew declared yet, public campaigns suggesting people stay at home are promoted. As a result of these efforts, we are seeing that a growing number of people are self-isolating at home. In this article, I will try to offer a humble insight into how we can make the most of the time while we are at home.

In the post-modern world, we live our lives in the fast lane. Everything around us is becoming temporary. In Liquid Life, Zygmunt Bauman thinks that the advancement of the capitalist system and the emergence of the consumerist society have turned solid things into liquid ones. In the liquid modernity, the pace of life is so fast that we cannot stop and think about ourselves even for a second in the hectic cities we live in. Instead, our only focus is to earn more and to consume more. For this goal, all we are trying to do is to work very hard. All of this eventually leads to the creation of an achievement society in which every one of us is doing all we can do to achieve something bigger and better.

Everyone is, in fact, in the pursuit of happiness in this late modern society. When Thomas Jefferson penned the Declaration of Independence, he stated that “people are endowed by their Creator with certain unalienable rights, that among these are Life, Liberty and the pursuit of Happiness.” It is remarkable to note that he specifically wrote “the pursuit of happiness” instead of just “happiness,” which was inspired by Scottish philosopher John Locke. “The pursuit of happiness” defines today’s consumerist society. As mentioned by Bauman, today’s the economic man is put in a position where s/he must do everything for the sake of happiness, but it is expected at the same time that s/he never finds it. This ensures that s/he will consume more and more for the goal s/he can never reach.

Byung-Chul Han, in his Burnout Society, claims that the character of the modern person is cultivated by the desire of the soul, which is consumed by “the paradigm of achievement or in other words, by the positive scheme of Can.” He thinks that “the positivity of Can is much more efficient than the negativity of Should,” meaning that “the achievement subject is faster and more productive than the obedience subject.” The inescapable feeling that we are in competition with other performance subjects puts us in a bizarre situation. As a consequence, we “freely” choose to be an achievement subject after all.

In the "The Human Condition," Hannah Arendt degrades human beings into “animal laborans,” criticizing Marx’s understanding of labor by saying that “labor is not the most important activity of man.” While she was trying to revive the vita activa (active life), she actually considered labor as the most primitive form of human activity that does not separate us from animals. For her, the second human activity is “work,” making the human being a homo faber. However, work is not the perfect form of human activity, either. Arendt thinks that “action” makes us free human beings: “Men are free... as long as they act, neither before nor after, for to be free and to act are the same.” Today’s achievement subject is Arendt’s animal laborans, who tries to work tirelessly in order to earn and spend more.

Today’s achievement subject is so busy that s/he lives her/his life shallowly. This life leaves no room for contemplation or even hesitation, as to hesitate means to die in the consumerist society in which everyone does nothing but to perform at all times. This modern lifestyle inevitably culminates in “the mechanization of human existence” as Günter Anders puts it correctly. Charles Dickens’s novel "Hard Times" is actually a good example of the illustration of the mechanization of human beings, depicting the mechanization processes during the Industrial Revolution beautifully in many areas of life ranging from factories to schools.

Hiedegger, in his "Being and Time," described the phenomenon of zapping. Using the radio as an example, he says that “one must pick a particular program and a particular song to listen, as ... one cannot hear everything. (Therefore) what shows itself is, in effect, the necessity of a limitation, the necessity of untruth in the sense of concealment of what cannot be assumed.” However, Heidegger further states that “what we see, rather, is that many people do not even choose one particular possibility of hearing but prefer to jump from one source to the next.” As a result of this, Heidegger thinks that “the ones listening to the radio make themselves slaves of their apparatus.” So, zapping actually creates slaves in Heidegger’s mind, who ultimately “bring an untruth and semblance into Dasein.” We could easily say that today’s animal laborans is actually a zapper, a slave, who always chooses to do different things instead of dwelling, and s/he cannot live a meaningful life. We zap through the world and become fleeting subjects that are most likely to suffer from what Heidegger characterized as “harassed unrest,” which eventually results in the denarration of time and the loss of direction. So, for him, the “absence of dwelling” is one of the serious problems of our modern society.

Likewise, Byung-Chul Han, in "The Scent of Time," asserts that the late modern life is overwhelmed not by the acceleration of time, but rather a dyschronicity (a discontinuity) which is basically the atomization of time with no particular direction that culminates in the “absence of dwelling” as Heidegger puts it: “Today’s temporal crisis is not a crisis of acceleration. The age of acceleration is already over. What we experience today as acceleration is only one of the symptoms of temporal dispersal.” Han thinks that the feeling that the time is accelerating is actually some kind of delusion: “Dyschronicity lets time whizz, so to speak. The feeling that life is accelerating is the experience of a time that is whizzing without a direction.” As a result, “the atomization of life goes in hand with the atomization of identity. All we have is our self, our little ego.” In today’s world where vita activa (active life) takes the place of vita contemplativa (contemplative life), phrases such as “Know thyself” which signifies the sign of wisdom in almost all ancient civilizations mean nothing to today’s animal laborans.

While we are self-isolating at home, which actually means that we are away from the vita activa, I think that we can take our time to contemplate on the meaning of life that we have lost with the absence of the vita contemplativa. The solution to the problems caused by our modern lifestyle is not to slow down as Kemal Sayar suggests, but to bring “contemplation” and “dwelling” back to our life as Heidegger suggests because the truth in life is deep within time. If we continue to live our lives shallowly, we cannot reach the truth, meaning that we cannot live a meaningful life. Thus, while we are with ourselves, which is a very rare occasion in the modern life, we should seize this opportunity and bring back the vita contemplativa to our life again, since Han suggests that “the temporal crisis will only be overcome once the vita activa, in the midst of its crisis, again incorporates the vita contemplativa.” As there is plenty of time to contemplate, let us not miss this great opportunity.