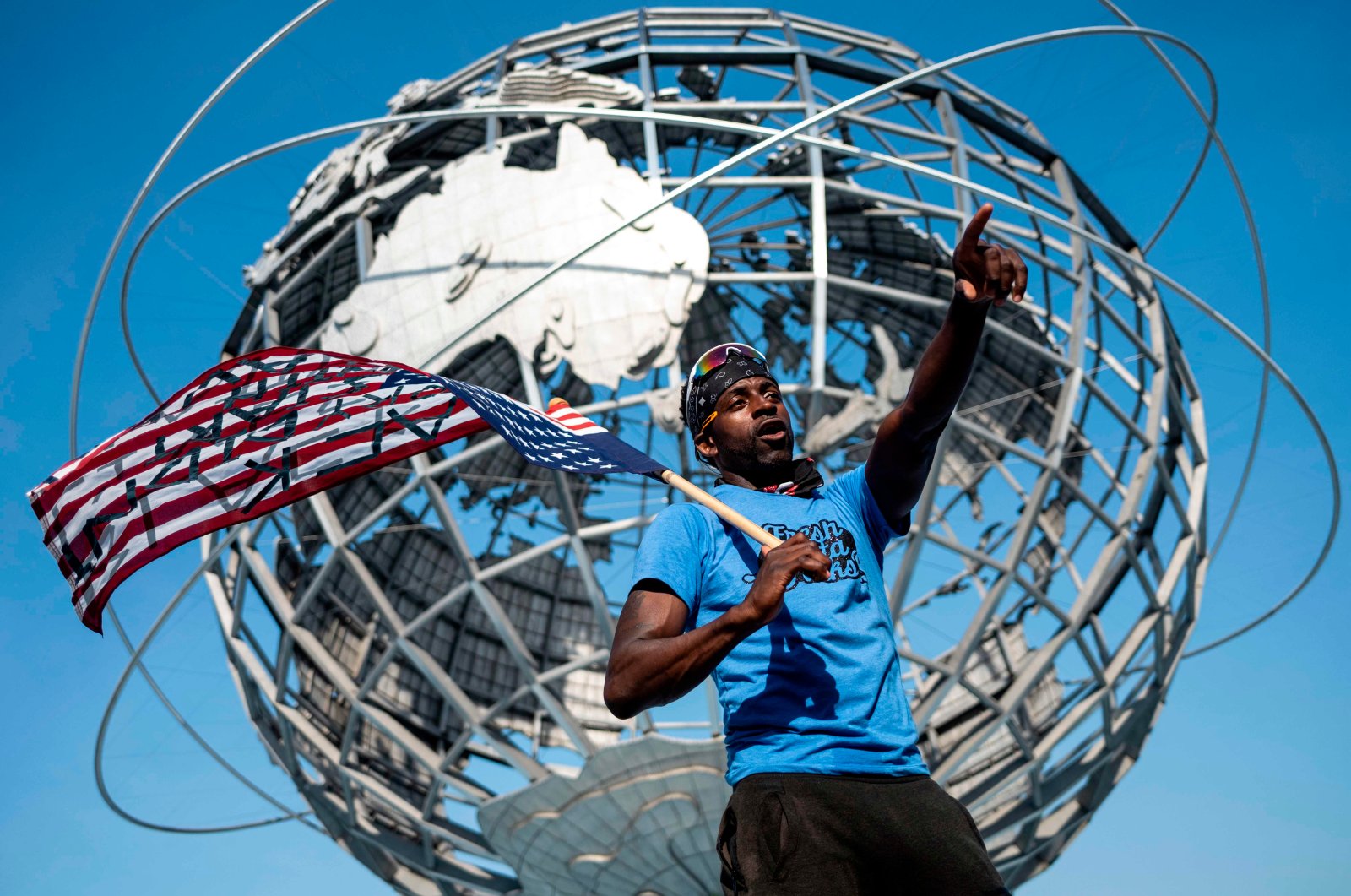 A protestor holds an upside-down American flag in front of the Unisphere during a Justice Ride, protesting the death of George Floyd, in the Flushing Meadows-Corona Park in the borough of Queens, New York City, July 18, 2020. (AFP Photo)
by Tamer Turkman Jul 21, 2020 12:05 am
RECOMMENDED

Memorial Day is a special holiday where Americans honor the men and women who died while serving in the military. This Memorial Day is one that Americans will never forget. A white policeman’s knee on the neck of a black man. A cruel and agonizing eight minutes and 46 seconds of a man desperately screaming for his mother and begging for a chance to breathe. Seeing this poor man helplessly die sparked a national reaction that has never been so powerful during my lifetime. The visual effect of the horrendous death of George Floyd left a catalytic impact on the U.S. and began a landmark movement against police brutality and social inequality.

For the past weeks, the protests of the Black Lives Matter movement have exploded to a level that we have never seen before. The killing of George Floyd is hatred in the extreme and demonstrates the level of real white privilege that exists in the U.S. The words "I can't breathe" have served as an awakening for Americans that never knew the true level of countrywide oppression and police brutality. The knee on the back of Floyd's neck was the boiling point that pushed hundreds of thousands of protestors into the streets nationwide. The fear of the coronavirus was outweighed and drowned by the anger and emotion of this unjust system continuing to helplessly endanger black lives.

I am from Baltimore, a city that is 60% African American and also ironically known as “Charm City." More than half of my closest friends were and are black. Despite being the son of immigrants, I always felt I was also one of the city's charmed. I am not a perfect man and have my own flaws, including driving fast. I have been pulled over by police over a dozen times and more than half of those times, I have been able to talk my way into getting a simple warning. I have never been handcuffed, touched or arrested. This personal statistic can rarely be matched by any of my black friends in a criminal justice system where racial profiling has been the norm. The color of my skin privileged me and gave me the benefit of the doubt. When I see a policeman, contrary to my black peers, I have never felt fearful for my life. I have had the privilege of feeling comfortable when I see a law enforcement badge.

Unfortunately, ever since I can remember, racial profiling has existed. Floyd's murder has shaken America – and for a good reason. If Floyd had been white, he would clearly be alive today. The steps involved in this heinous murder can clearly be attributed to the color of his skin. If he had been white, the store clerk might not have even thought to call the police. The color of his skin triggered the instinct to cry foul. When the police arrived, Floyd was guilty from the get-go. Being black was enough to detain and handcuff him. No explanation or defense was granted. The color of Floyd's skin was justified grounds for that evil knee to be pressed against his neck, resulting in his death. This black man was dehumanized to the point where even the onlooking bystanders' pleas went in one ear and out the other. No mercy. Floyd's death was the absolute definition and symbol of racial inequality. For those police, there was no mercy or value that would have been very well given if he had been white.

The murder has angered me along with hundreds of millions of Americans. It has also made me proud of my Turkish nationality. I have met thousands of Turks and seldom have I experienced racism. In fact, I have witnessed love from the Turks toward African Americans. Many Turkish students have had African American host families where I have witnessed their love and affection to be reciprocal. Every black American I know who has lived in Turkey has spoken volumes of the treatment and hospitality of the Turks. Fellow Baltimorean and basketball star Angel McCoughtry summed up her feelings on her May 27 Instagram post: "I lived in Turkey for 6 years and never felt out of place or scared for my life." Another reason to point out how happy is the one who can say, "I am a Turk."

This Memorial Day was not the same. It will be remembered as the force that would shake and change the fabric of the U.S.