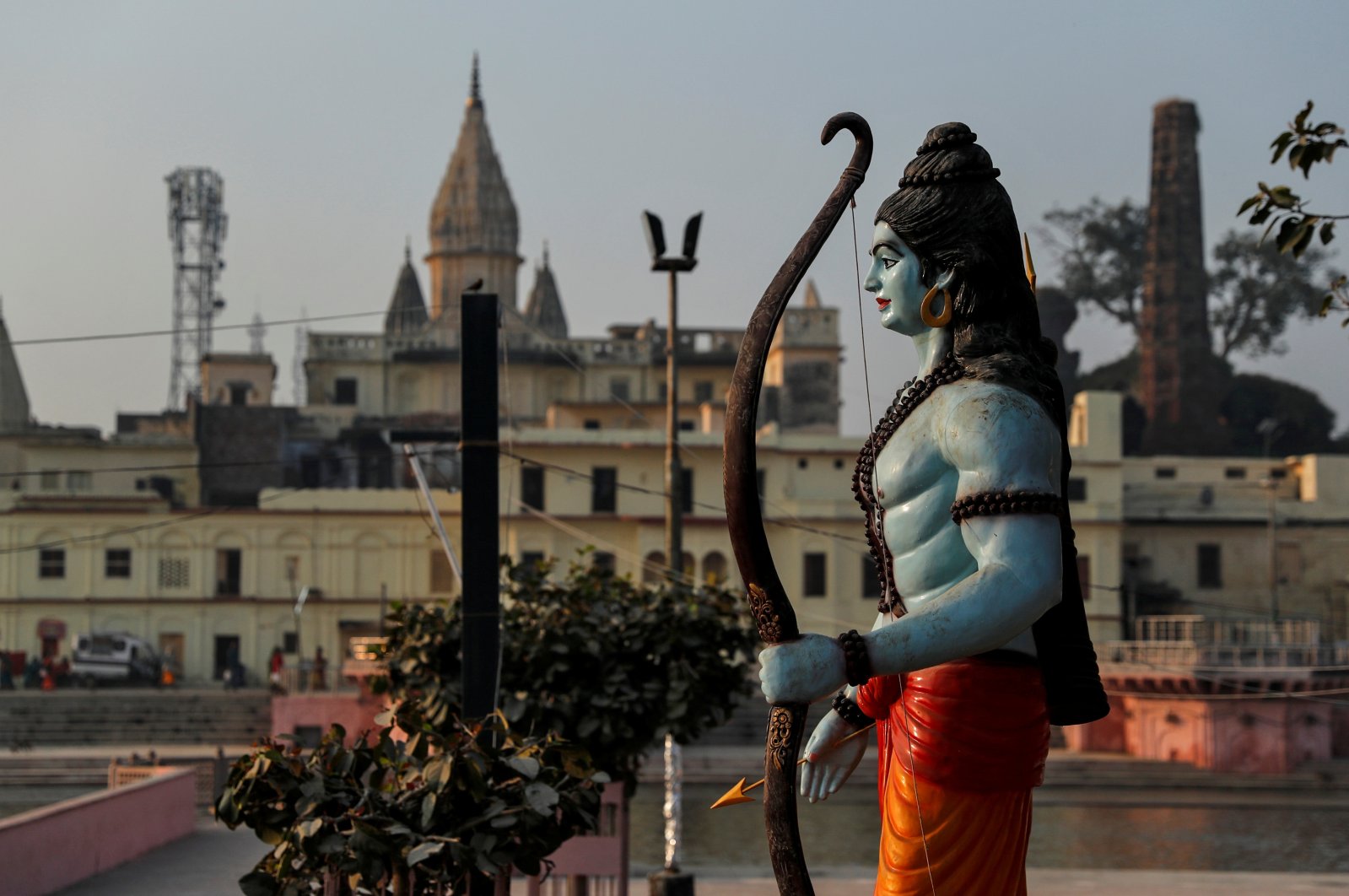 Aug. 5, 2020, will be remembered as one of the darkest days in the history of India. The grand celebrations of placing a foundation stone for Ram Temple in the Indian province of Ayodhya will be marked as a burial day for justice.

The liberal press in Britain and the U.S. branded the Indian Supreme Court verdict of “Ram Janmabhoomi-Babri Masjid (mosque)” as a “victory for Indian Prime Minister Narendra Modi” and a secular state becoming a Hindu nationalist country. In other words, the press warned ethnic minorities of tougher times ahead.

Ever since the Hindu nationalists succeeded in their plans to destroy the Babri Masjid in Ayodhya and replace it with Ram Temple, the Indian Muslims have been living in hell. Anyone can face lynching, public beating, arrest without charge and even receive threats of expulsion from the country. That’s the face of the "new" India: No place for Muslims, Sikhs, Christians and Dalits.

Since then, the Bharatiya Janata Party (BJP) has introduced the Citizen Amendment Act and scrapped Article 370 in Jammu and Kashmir. Despite public pressure, there are no signs of rethinking the inhumane acts.

So what next? How many more mosques will be demolished? Long before the unlawful destruction of Babri Masjid, Rama Lakshmi cited the book “Hindu Temples: What Happened to Them” (1990) that claimed, “There are 2,000 mosques that stand on top of demolished temples." Also, Meenakshi Jain’s recent book: “Flight of Deities and Rebirth of Temples: Episode from Indian History” (2019) tells the same story.

But, Jaya Menon and Supriya Varma, archaeologists and co-authors, have found “No evidence of a temple under Babri Masjid.” In fact, evidence shows that the demolition of Babri Masjid was a well-planned game. Asaduddin Owaisi said: “History will remember what happened in December 1949, when the idols were placed surreptitiously in the masjid and the events that led to the demolition in 1992.”

Obviously, the hostility toward Muslims and mosques did not develop overnight, but it took years of systematic campaigns to portray Muslims as the "bad guys," "criminals" and "enemy within." Rama Lakshmi wrote, “Many Hindus, over generations, had been taught to view the mosque as a site of historical humiliation." Moreover, Lakshmi found BJP leader L.K. Advani “introduced the new language of Hindutva pride” in the early 1990s and used the “historical Hindu wound and made Babri Masjid a buzzword for hate."

Today, anti-Muslim rhetoric is a common feature of the BJP’s leaders’ political language. Unfortunately, this rhetoric is showing no signs of ending. A few days ago Vinay Katiyar vowed that “one job has been accomplished in Ayodhya, and two are yet to be done like Ayodhya, temples have to be built at Kashi and Mathura, too."

Now, some sections of the Indian media and politicians are strengthening a brand new narrative: Those Muslims supporting and donating for Ram Temple are “good guys” and are accepted, but those protesting against it are “bad guys," the “enemy within” and should be expelled. Go to Pakistan or Qabaristan (graveyard).

The irony is that BJP leaders like Kamal Nath are insisting that “Ram Temple in Ayodhya is being built with the consent of every Indian." The reality is completely opposite on social media sites and the liberal press.

A wire report reveals that Ayodhya's district administration places restrictions on the media covering the event. For example, during TV debates "no comments on any religion, community, sect or any specific individual" can be made – not because the Modi government is afraid of rioting against Muslims but because it is trying to fix an image of the right-wing party of the Rashtriya Swayamsevak Sangh (RSS) which butchered Muslims in the recent riots.

So why is there a crackdown on the media? Perhaps, to camouflage a yearlong brutal lockdown in Kashmir or to cover up the conquest of Babri Masjid by RSS extremists. The best way to get well-informed about it is to read journalist, Pamela Philipose's article: “Backstory: Ram Mandir and Kashmir – A Tale of Two Forms of Media Control.”

A practicing journalist, Zainab Sikander wrote: “The one thing Indian media is not doing is journalism. In fact, very few people are doing journalism today. Channels from Zee News, Aaj Tak to Network18 like to add the word ‘jihad’ (holy war) to everything. Corona jihad or zameen (land) jihad, love jihad, arthik (economic) jihad, and whatnot. But if anyone is 'waging' a holy war today, it is Indian media’s jihad against Indian Muslims and Islam."

Sikander enlists events and conspiracies that were associated with the Indian Muslims in recent months. These include, “Tablighi Jamaat conspiracy theories, a dash of anti-nationalism reserved for Muslims who are called more Pakistani than Indian, a huge dollop of ISIS connection (especially in the land of Malayalis) and a generous serving of demonization through constant use of rhetorics like jihad, halala (a remarriage strategy), triple talaq (divorce), beef eaters and anything that a devious mind can conjure (‘Muslims in India are deliberately spreading the coronavirus’)."

The Indian media is constructing a narrative that shows how Indian Muslims are enthusiastically supporting their Hindu brothers who are building Ram Temple in the place of Babri Masjid (mosque).

Through a series of columns, opinion pieces, editorials and feature reports, a smartly designed and organized chronicle of the Hindu population’s suffering at the hands of various Indian Muslim rulers like Tipu Sultan, Aurangzeb Alamgir, is fabricated to present Hindu as oppressed victimized and badly treated.

Moreover, extracts of newspaper texts demonstrate that it is the Hindus' right to reverse history that was anti-Hindu for centuries, and hence RSS and other Hindu groups are not attacking Muslims but, in fact, rewiring and correcting history.

In a systematic push, sections of the Indian media are trying to convince the world that Muslims have no problem with the Ram temple being built on the site of the mosque and that Ram was their ancestor and they just converted to Islam.

In brief, a double edge-blade storyline reflects two important points: The vast majority of the Indian Muslims are the “enemy within,” and Hindus groups involved in building Ram Temple are correcting the unforgivable mistakes of the Muslim rulers.

Ratan Sharda, author of the book “Secrets of the RSS” proclaimed that “August 5 is a significant date for Independent India” meaning that “Bharat will no more be apologetic about its past nor about the path it chooses to regain its glory."

Sharda openly praised the extremist RSS organization as, “Thankfully, there were organizations like RSS, great indigenous, rooted leaders like Madan Mohan Malavya, B.R. Ambedkar, K.M. Munshi, Rajagopalachari and many others who kept the flame glowing for the right moment."

Given the hateful content of the mainstream press in the country, it's not hard to imagine what Modi's plans are for the Indian Muslims. So, what will be the price of such reporting? Another Muslim bloodbath?

Today, the Modi government is erasing Muslim history and replacing it with lies, deceptions and self-declared imaginary heroes. But how will the next generation react when they hear about the truth behind the building of Ram Temple?

The best option for all those peace-loving Hindus, Sikhs, Christians and Muslims is to join hands to reject Modi’s version of present history and start rewriting their own history that allows everyone to live peacefully side by side.