Is Iran or Pakistan indispensable in China’s foreign policy? 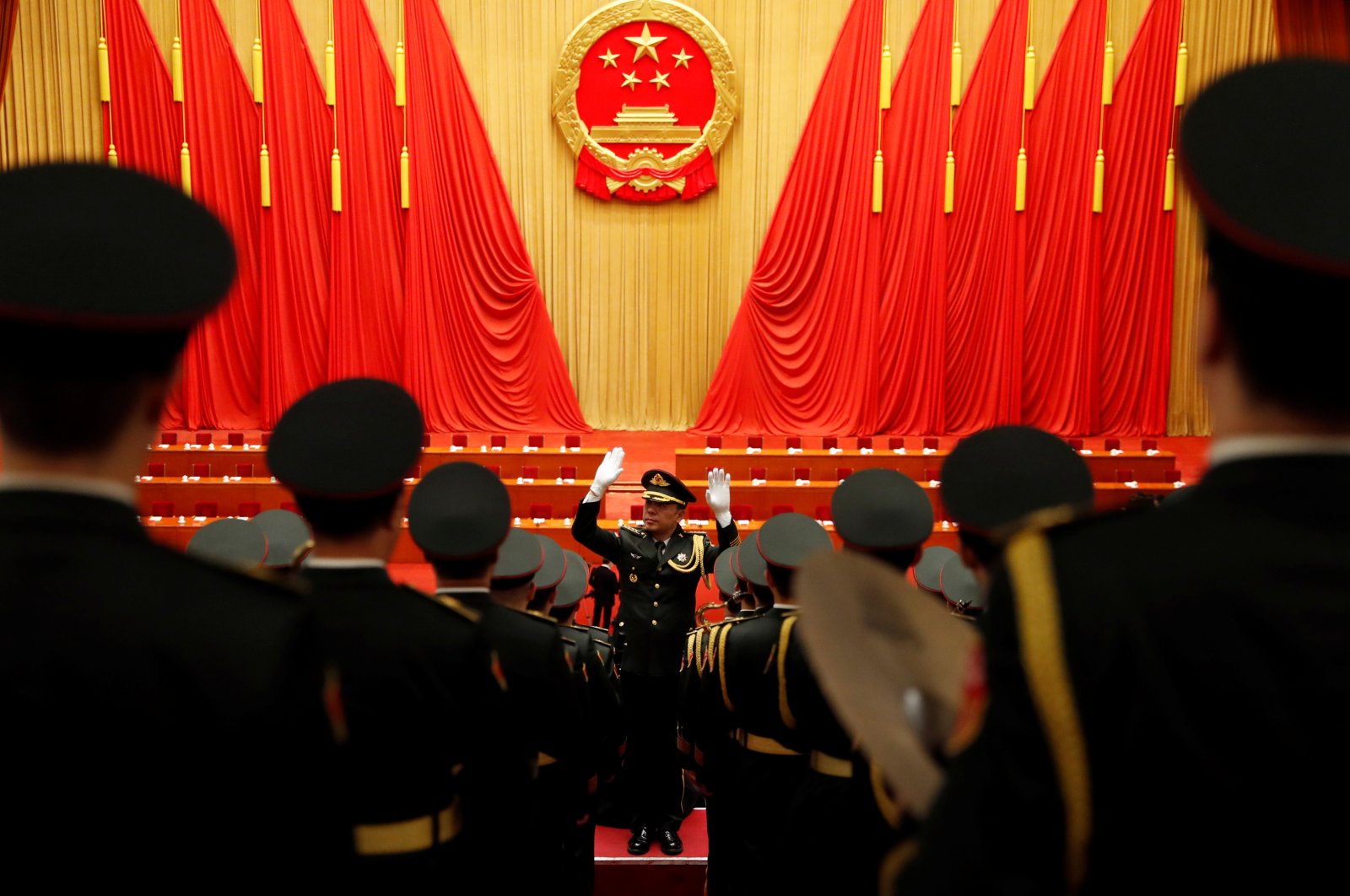 Military band members rehearse before the meeting to commend role models in China's fight against the coronavirus outbreak, at the Great Hall of the People in Beijing, China, Sept. 8, 2020. (Reuters Photo)
by Muhammet Ali Güler Sep 09, 2020 12:05 am

The two important Islamic republics of Pakistan and Iran have emerged as China’s allies, but relations between Beijing and Islamabad are better economically and politically than those with Tehran. The website of the Chinese Embassy in Pakistan describes the relationship between Beijing and Islamabad as an “all-weather strategic cooperative partnership.” Therefore, the lion’s share of Chinese overseas investment, a little over $70 billion, goes to Pakistan under the China–Pakistan Economic Corridor (CPEC).

The goals and focus of Tehran and Islamabad are centered on economic development while Beijing is far more concentrated on security. This is in addition to the desire to be the best in the world when it comes down to everything from the economy to technology.

China is currently the largest trading partner of over 100 countries and regions across the world and Islamabad is not an exception. Sino-Pakistani relations have seen an increase due to CPEC, which is a major part of the Belt and Road Initiative (BRI), described as the project of the century by Chinese President Xi Jinping. Additionally, Chinese Ambassador Yao Jing stated at the fifth CPEC Media Forum in 2019 that the two-nation partnership has the potential of creating around 2.5 million jobs between 2015 and 2030.

The total volume of trade between the two countries stood at approximately $15 billion in 2019. Chinese exports to Pakistan were nearly $13 billion while the reverse was around $2 billion. Furthermore, Islamabad is also the largest buyer of Chinese-made weapons.

Due to the rapid growth in relations between the two, Pakistan has two substantial reasons for being important to China’s economic and security stability.

Firstly, Pakistan is the second-largest Muslim country in the world. It is for this reason that Beijing believes Islamabad’s stance would prevent militants from entering China through Pakistan. In other words, Beijing wants to secure the Xinjiang Uighur Autonomous Region (XUAR) from attacks by the Turkestan Islamic Movement, which it believes to be allied with al-Qaida and the Taliban.

The second reason is that a stronger Pakistan must be created as a balance in an atmosphere where China and India could become rivals. It is a wise strategy to keep Islamabad closer as it is the archenemy of New Delhi and especially since India is a close ally of the U.S. in the region.

It is also well known that China’s ambitious policies have disturbed and confused its neighbors. The majority of countries in the region strive to strengthen economic ties with Beijing while, at the same time, not showing any sign of establishing a political and military bloc. In other words, countries in the region are cautious about China.

Islamabad has been facing severe economic challenges that paved the way for a partnership with Beijing. Furthermore, the geographical location of Pakistan functions as a door opening East into China. Thus, China is able to reach out to the West much faster by connecting Xinjiang to Pakistan and the westward regions, instead of using the Malacca Strait, for larger trade aims.

In addition, China would be able to import significant raw materials such as oil through a shorter and safer route. This plays a crucial role in feeding the ever-hungry Chinese industries.

Permanent security and economic accomplishments are the results of interconnected policies. As such, the Chinese leadership views Islamabad as Beijing’s closest ally in the region. Hence, Pakistan occupies a more significant place in Chinese foreign policy. Moreover, Pakistani leaders are also willing to deepen ties in various areas, ranging from trade to military due to the country’s internal and external problems.

Beijing and Tehran have agreed to boost bilateral relations with China investing an extraordinary target of $400 billion in Iran, far more than what is going to Pakistan. This deal is China’s biggest commitment to any nation in the Middle East or the world. The reasons for improving relations between Tehran and Beijing have similarities with Pakistan’s approach to China.

Tehran has also been facing grave economic challenges due to long-term sanctions from Western powers. Moreover, Iran is also a part of the BRI, under which there have been both completed and ongoing projects such as direct freight by train between China and Iran from the city of Urumqi in XUAR to Tehran and linking Kazakhstan, Kyrgyzstan, Uzbekistan and Turkmenistan.

However, the American embargoes have caused European and Chinese companies to reduce their ties with Iranian partners and leave the country. There are many businesses that have been punished by the U.S. for violating sanctions on Iran.

For example, the U.K.-based bank Standard Chartered and French BNP Paribas were found guilty of violations and fined around $700 million. The Chinese state-owned Zhuhai Zhenrong was also sanctioned twice, first in 2012 by the Obama administration and again in 2019 by President Donald Trump.

In other words, this means the U.S. may intimidate other Chinese business giants from considering expanding commercial ties with the Iranians. On the other hand, many view these sanctions as unilateral punishments that are against the rules and doctrines of free international trade.

China was Iran’s largest trading partner in 2018 but the following year, Beijing invested less than $2 billion in the country, while putting over $5 billion and nearly $4 billion into Tehran’s two rivals, Saudi Arabia and the United Arab Emirates (UAE) respectively. The trade volume between Iran and China was slightly over $50 billion in 2014, less than $35 billion in 2015, $37 billion in 2017 and around $33 billion in 2018. The trading volume fell by 40% in 2019 mostly due to the American-led global pressure campaign against Iran.

Pakistan has had many things going for it when it comes to relations with China, thus making the South Asian country much luckier than Iran. There are many reasons for this good fortune including the fact that Islamabad has not been isolated by a majority of the international community, which is not the case for Tehran.

Thus, China is taking very little risk when it comes to investing huge amounts of money in Pakistan.

Another reason Beijing finds Islamabad more important than Tehran concerns the ability to maintain internal and external security, especially since both sides agreed to cooperate in the fight against terrorism.

In addition, Pakistan’s geopolitical location has more advantages and uses for China than Iran. Thus, Beijing would prioritize the relationship with Islamabad over Tehran.

The other observable point is the perception of China in Iran and Pakistan.

In addition, it is well known that Beijing is the largest client of Iranian crude oil but due to investments in other regional countries, China has alternative options for it.

The total bilateral trade between the United States and China reached a trade surplus of over $1 trillion from 2017 to 2019. Therefore, Beijing may not be eager to further risk its own economic benefit in its relations with Washington for the sake of Tehran.

Based on what I have learned from Chinese business people, there are two very basic principles. Firstly, they do not look for any trouble in business, and secondly, they do not like having trouble when doing business.

In short, China’s Iran policy may only be an illusionary strategy to counteract Washington at the negotiating table, but it is also an approach that failed during the talks between North Korea and the U.S.