Is the liberal international order ending? What is next? 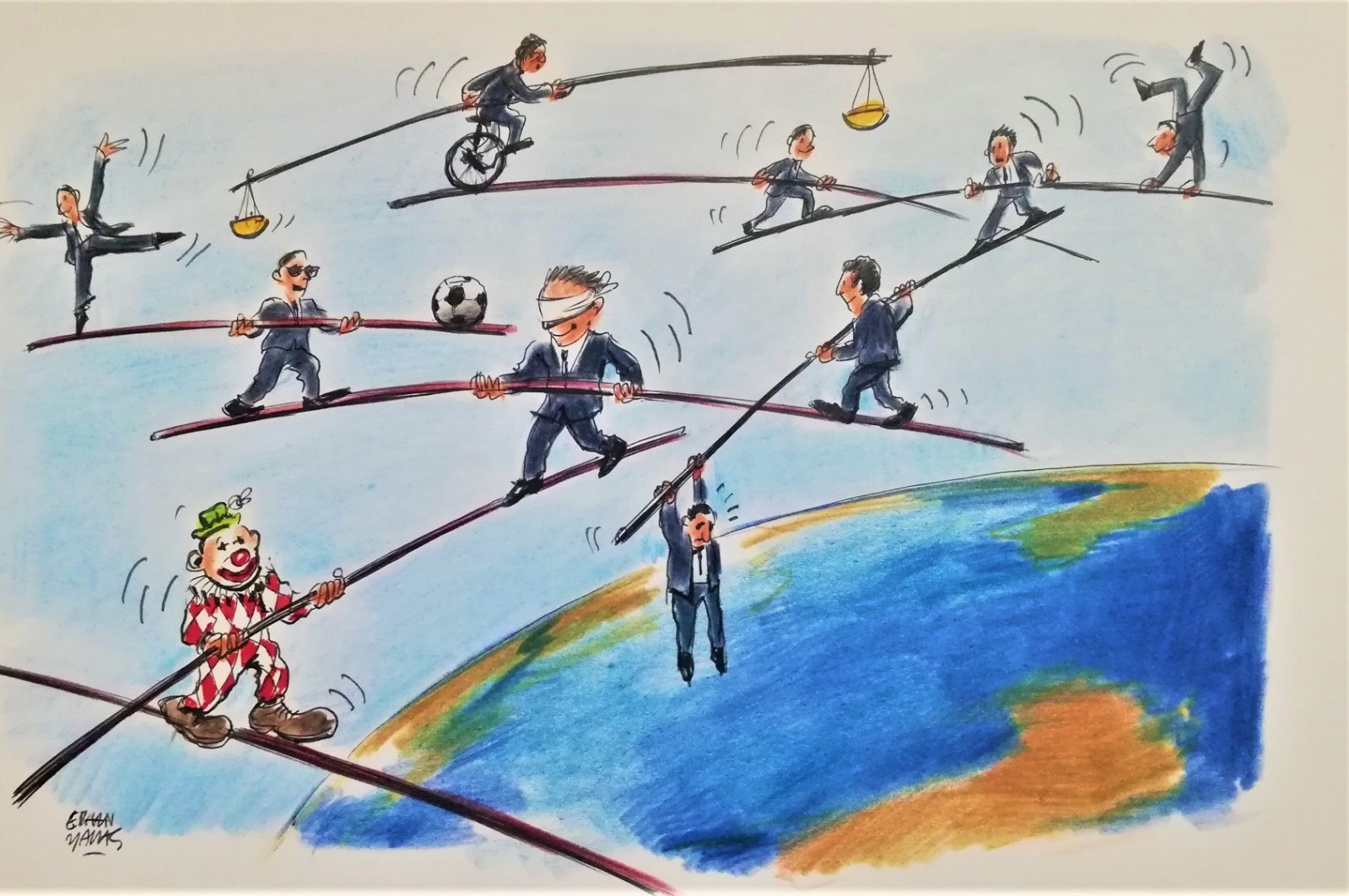 Following the end of World War II, with fascism defeated, the West under the U.S.' “hegemonic” leadership created multilateral institutions – including the United Nations, the World Bank, the International Monetary Fund (IMF) and the General Agreement on Tariffs and Trade (GATT) that became the World Trade Organization (WTO) in 1995 – to support an international system favorable for liberal economic relations and democracies. During the Cold War years, the Communist bloc, although part of the U.N., emerged as a competing group. During the 1990s, however, most former communist countries became part of the same liberal international system. Over the decades, multilateral cooperation expanded into various other issues – including the environment, health, skies, space, open seas, human rights and proliferation of nuclear weapons – under U.S. leadership. Even though the U.S.’ role and policies in this world system have often been criticized, many believe that the sustainability of it has depended on its leadership.

Yet, the U.S.’ hegemonic guidance has become increasingly questionable, especially during the current administration. President Donald Trump withdrew the U.S. from several multilateral treaties, including the Joint Comprehensive Plan of Action (Iran nuclear deal), the Paris Agreement on climate change and recently the Treaty on Open Skies, in addition to defunding the World Health Organization (WHO). He disregarded the WTO when he engaged the U.S. in a “trade war” with China seeking bilateral trade deals. He pulled out of negotiations of multilateral trade and investment agreements, namely the Trans-Pacific Partnership (TPP) and Transatlantic Trade and Investment Partnership (TTIP), and renegotiated the North American Free Trade Agreement (NAFTA). Institutions of the liberal order and long-term U.S. allies have been repeatedly criticized by Trump. Although the U.S.' hegemonic leadership has been questioned from time to time in past decades, it is now more pronounced under his administration.

The Foundation for Political, Economic and Social Research (SETA) in Washington, D.C., organized a webinar on June 1 with Alexander Cooley and Daniel Nexon, authors of the book "Exit from Hegemony: The Unraveling of the American Global Order." They argue that the international order has been undergoing a fundamental transformation and that Trump is just a symptom of this change. Russia, as a strong nuclear power, and China, as the world’s economic powerhouse, have been demonstrating illiberal domestic and foreign policy behaviors targeting the Western order, pushing counter-norms, promoting alternative institutions and being revisionist powers in their regions. Weaker nations have started to seek alternative patronage and security partnerships with these states, rather than the U.S. and its allies. For example, Saudi Arabia is seeking close relations with China. Various transnational networks also promote illiberalism, ethnic nationalism and extremist values, thus challenging the anti-authoritarian and progressive networks of the 1990s. These developments are eroding the liberal international order and the Trump administration, with its "America First” doctrine, contributes to the further weakening of the system rather than reasserting American leadership.

Indeed, scholars such as Yale H. Ferguson and Richard W. Mansbach have written along these lines before, but these ideas have become more pronounced these days. The Trump administration, instead of bolstering U.S. leadership, is undermining it. The U.S. no longer shows plausible authority to solve regional conflicts either. The obvious example is the Israeli-Arab/Palestinian conflict. Although U.S. policies have been far too lenient to Israel's demands in the past, with the Trump administration, the U.S. has become an open supporter of Israeli positions, including its declaration of Jerusalem as its capital and its annexation of the West Bank, disregarding the rights of Palestinians.

Based on these developments, many international relations scholars are observing that the liberal world order is crumbling as U.S. power is losing its effectiveness. The fate of U.S. leadership in the coming years and decades is uncertain. For some, the Trump administration has damaged America's status to the extent that U.S. hegemonic leadership is not recoverable. The reassertion of America's superpower status now would require strong cooperation among advanced industrialized countries that embrace democracy and the institutions and values of the liberal international order. Without it, Trump’s presidency might mark the end of the system, which was the product of the U.S.’ strong leadership during the post-war period.

It seems that current international institutions are not going to hold without American leadership and the cooperation of major powers, contrary to what proponents of liberal internationalism hope for. Will global interdependence ensure increasing cooperation? Will interdependence and the spread of liberal democracies preserve peace and cooperation? It is clear that it is not “the end of history” as Francis Fukuyama argued in the 1990s, with the participation of former communist countries in modern economic systems. What the world order is evolving into is debatable. Donald J. Puchala, in his book, "Theory and History in International Relations," argues that the system is evolving into a balance of power system, which was, historically speaking, susceptible to major power confrontations, conflicts and wars.

The U.S.’ relative economic power has also been declining for decades now. The U.S.’ share of world gross domestic product (GDP) has declined from about 50% of the world economy at the end of World War II to about 20% today. Cooley and Nexon also show in their book that in the 1980s, Group of Seven (G-7) economies – with the U.S.' as the biggest – accounted for half of the world economy, and BRICS (Brazil, Russia, India, China, South Africa) countries – among them the Chinese economy being largest – controlled about 15% of global GDP. The BRICS’ share of the world economy caught up with the G-7 countries’ share, both being around 31%, in the middle of the last decade. Now, there are multiple economic power centers, including the European Union, North America and Asia. Chinese and Asian growth, however, has been more robust than the rest of the world. In Asia, India is another country with large economic potential, as its economy has grown rapidly in recent decades. Japan had a “lost decade” in the 1990s in terms of its economic growth, but it was still the second-largest economy in the 1980s and remains financially powerful.

Russia has not been as big economically, but with its strong military power and its nuclear weapons arsenal, it started to reassert itself in the 2000s, creating its own “sphere of influence” under former Prime Minister and current President Vladimir Putin’s rule. China’s economic and political influence has been increasing with its Belt and Road Initiative and its increasing presence in Africa. Its influence on Asia’s economy and politics has been growing for the past three decades. In the 2000s, China's expanded influence created arguments about the transition of power. In Zhiqun Zhu’s book "U.S.-China Relations in the 21st Century: Power Transition and Peace," China is expected to become the next superpower. The theory builds on the experiences of past power transitions, all of which occurred with a war between the dominant power and the newly emerged power. Zhu in his book hopes that the transition this time will be peaceful.

The change and its effect

Even as we observe historical similarities of “great power” rivalries, we still have a very changed world. If we just compare this century with the 19th century, for example, all “great powers” of this generation have nuclear stockpiles, which means that any war among them could result in “mutually assured self-destruction.” Would this not deter “statesmen” and peoples of these countries from engaging in a possibly disastrous war?

In addition to nuclear technologies, unprecedented levels of communication and transportation technologies along with liberal government policies have led to multidimensional globalization, creating our “global village.” As all parts of the world become interconnected, people living in different corners of the globe increasingly become aware of one another, cognizant of common environmental, health and economic problems. Even though nation-states and national borders have not withered away and national identities are still strong, wouldn’t people put enough pressure on their governments to solve common problems rather than escalate conflicts that reduce the welfare level of all peoples?

Economic and financial globalization is strong. Financial markets are globally connected and its institutions operate worldwide, while multinational corporations and their operations have grown tremendously. All economies are more dependent on global trade, as it grew faster than the world’s average economic growth rate since World War II. Now, production, finance and trade are global, and the welfare of nations is tied to one another. Wouldn’t such a level of interdependence sufficiently pressure governments to cooperate in order to ensure the continuity of their economic well-being? Of course, such globalization is reversible, but with a huge cost in losses for all countries. Who would want that?

And yet, we are about to enter the age of artificial intelligence (AI). As machines and tools get smarter, economic and social life will change, and such changes will lead to power changes within and among countries. I am not able to describe what is coming next, but it seems to me that the world is evolving into something unique and quite different from its historical episodes. Your thoughts?

*Associate professor and chair of the Department of Business Administration, American University of Iraq, Sulaimaniah