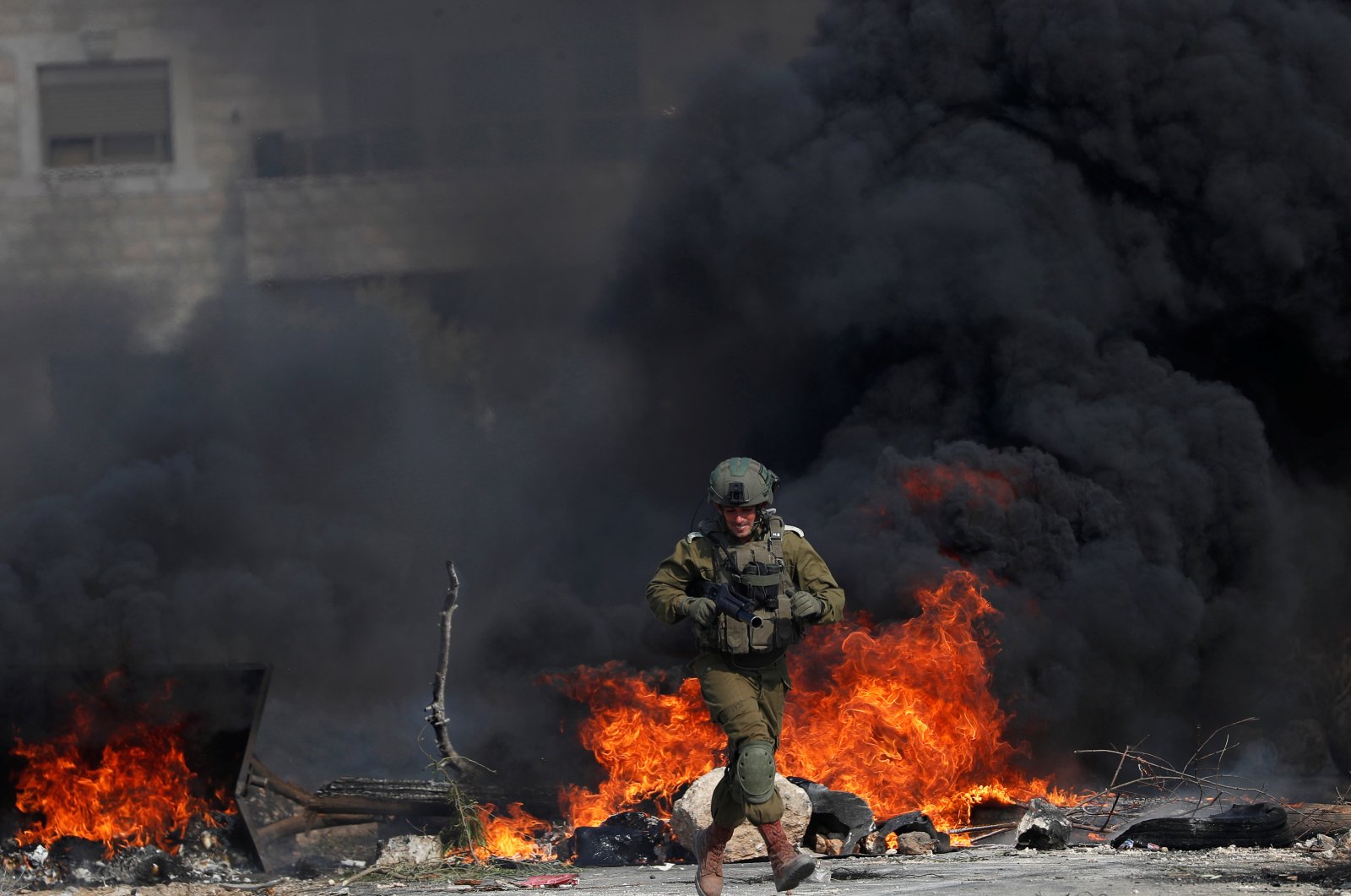 An Israeli soldier runs in front of burning tires during a Palestinian protest against Jewish settlements, in Beit Dajan in the Israeli-occupied West Bank, Oct. 30, 2020. (Reuters Photo)
by Najla M. Shahwan Nov 02, 2020 12:05 am
RECOMMENDED

The idea of a two-state solution to the Israeli-Palestinian conflict developed gradually after Israel occupied the West Bank and Gaza Strip in the 1967 Arab-Israeli war, better known as the Six-day War.

The 1991 Madrid Peace Conference brought Israelis and Palestinians for the first time in direct negotiations. There an international consensus emerged for an eventual solution involving the creation of a Palestinian state in the West Bank and Gaza existing in peace and security with the state of Israel.

The actual borders of the two states, the fate of Israeli settlements, the status of Jerusalem and the Palestinian refugee issue were to be finalized in later stages.

Although both came close to agreeing on the basis of these parameters, no deal was ever reached.

After decades of conflict, progress toward a two-state solution has, by most standards, become even more challenging as realities on the ground have become irreversible, political trends on all sides have weakened, talks have halted and historic paradigms on negotiations and final-status issues remained in question.

Besides, demographics, domestic politics and geopolitical trends, all suggest that the continued passage of time is eroding some of the bedrock principles that have defined the contours of the two-state solution for decades.

Perhaps the most evident failure of the two-state proposal lies in the deep fragmentation of Palestinian territory. First and foremost, Israel's accelerating settlement construction policy has established a vast network of settlements scattered in the West Bank and east Jerusalem. These facts on the ground ensure that a future Palestinian state would constitute a fragmented, shattered entity with little true sovereignty.

Although settlements are illegal under international law as they violate Article 49 of the Fourth Geneva Convention, which prohibits the transfer of the occupying power's civilian population into occupied territory, Israel has established since 1967 about 132 settlements in the West Bank and 13 in east Jerusalem, in addition to some 113 outposts erected by settlers without official authorization.

The seizure of land for settlement building and expansion has resulted in the shrinking of space available for Palestinians to develop adequate housing and basic infrastructure and to sustain their livelihoods.

Israel's failure to respect international law, along with the lack of adequate law enforcement vis-a-vis settler violence and the takeover of land has led to a state of impunity, which encouraged further violence and undermined the physical security and livelihoods of Palestinians.

Continuing settlement construction, expansion and encroachment on Palestinian land and water resources have been an integral part of the ongoing fragmentation of the West Bank, including the isolation of east Jerusalem. This fragmentation undermines the right of the Palestinian people to self-rule, which is to be realized with the creation of a viable and contiguous Palestinian state alongside Israel.

Although settlements are not the only obstacle to a two-state deal, they remain the most critical obstacle as they expand dramatically while the settler population grows and the political will to uproot them does not exist.

Israeli Prime Minister Benjamin Netanyahu sees the increase in the number of settlers and settlements as a tool to destroy a two-state solution culturally speaking of "less than a state" to describe his vision of a future for Palestinians, who demand equal rights in their ancestral land.

On Jan. 28, 2020, U.S. President Donald Trump released his so-called Deal of the Century plan that outlined his vision for a final settlement to the Israeli-Palestinian conflict.

The most significant feature of the plan was a proposed Israeli annexation of all Jewish settlements in the occupied West Bank as well as Israeli control over settlement enclaves within the remaining territory allocated to a future Palestinian state.

This reflected the administration's position, articulated in November 2019 by U.S. Secretary of State Mike Pompeo, that the U.S. administration no longer considers Israeli settlements in the West Bank violate international law.

Despite its appropriation of the two-state label, the plan does not offer Palestinians a viable and secure future in their own state. Instead, the proposal would build a one-state reality of open-ended occupation and unequal rights for Palestinians.

Should Palestinians not accept this "generous" offer within four years, Israel will be allowed to begin settlement activities in areas that the plan designated for Palestinians (Areas A and B).

In the meantime, the U.S. plan allows Israel to immediately extend its sovereignty to all Israeli settlements (in Area C), resulting in the annexation of at least 30% of the West Bank – in contravention of international law and the U.N.'s founding charter.

The plan green-lights the annexation of the Jordan Valley and other strategically important areas around Jerusalem, such as E1, which is critical to a viable two-state solution.

In return, Palestinians will be granted continued self-governance and will be offered a pathway toward recognition predicated on renewed negotiations and a long list of conditions determined by the U.S. and Israel.

The plan leaves Palestinians with a downsized entity made up of disconnected enclaves in the West Bank and Gaza. It will be devoid of meaningful sovereignty, lacking any control over its borders, airspace, territorial waters, and the bulk of its natural resources – and with no capital in east Jerusalem. Israel will retain full military control over Palestinians, with its security forces able to arrest them at any time.

On the other hand, the plan denies the (mostly symbolic) right of return of around 3 million Palestinian refugees in Lebanon, Jordan, and Syria to Palestinian territories.

Trump's plan will not end the decades-old conflict but will actually extend it.

Palestinians look at the entire Israeli-Palestinian territory as their historic homeland and accordingly believe that they are entitled to 100% of it.

In 1988, the Palestine Liberation Organization (PLO) officially accepted a two-state solution to the conflict and gave up its demand for control over all of historical Palestine, settling instead on a state within the 1967 lines – one that would constitute only 22% of the land. Palestinians view this as their "historic compromise." Thus, Palestinians refuse to accept a state that would comprise less than 22% of historical Palestine.

The failure so far to reach a negotiated agreement on this fact along with the changing realities on the ground and the current deadlock has left many supporters of peace dismayed about the future and searching for alternatives to the two-state concept.

Some Palestinians and some Israelis now advocate a "one-state solution," with the focus turning to a civil rights campaign for Palestinians – who would soon be a majority in a binational state. This would effectively be the end of the Jewish homeland and thus unacceptable to the vast majority of global Jews and many others.

Those who have not lost hope for the two-state paradigm explain how border alterations, settlement removal and land swaps could still create a contiguous Palestinian state.

In reality, Israel occupies Palestinian territories in a manner that is consistent with full sovereignty, albeit without the consent of the Palestinian population, a reality that will likely continue despite superficial Palestinian "independence."

Netanyahu's administration is content to let the current, unequal one-state situation continue indefinitely but favors the "Israel alone" status quo, but over the long run, a one-state solution would impose unacceptable costs on Israel, on the Palestinians and ultimately on the whole region.

Israelis, according to the polls, believe in preserving both their country's Jewish character and its democracy, and this will not be possible to achieve so long as millions of Palestinians are ruled, against their will, by Israel.

The two-state solution is now the challenge, and the international community must strongly and affectively urge as soon as possible to implement the solution for an independent, democratic, contiguous, sovereign and viable Palestinian state within pre-1967 cease-fire lines in the West Bank, Gaza Strip and east Jerusalem, living peacefully alongside Israel as this remains the only possible sustainable solution that will offer peace to the whole region.