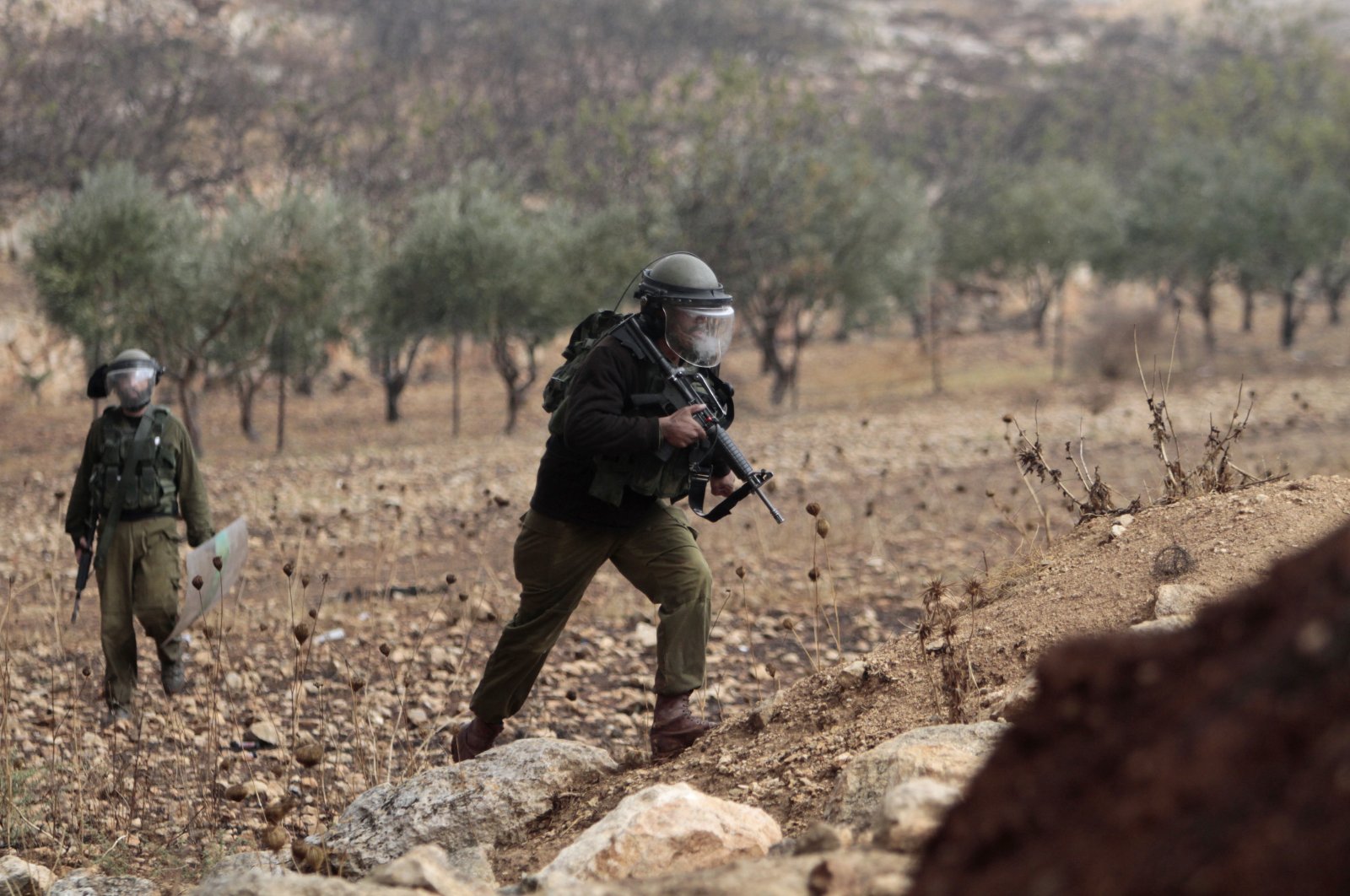 An Israeli soldier takes a position during the demonstration against Israeli settlements in the village of Beit Dajan, in the West Bank, Palestine, Nov. 19, 2021. (Photo by Getty Images)
by Ali Adam Nov 23, 2021 12:05 am

Recently, Israel announced the approval of some 1,300 Palestinian homes in Area C in the occupied West Bank. The proclaimed approval came days after the Israeli government approved the construction of more than 3,300 housing units, many of them deep in the West Bank.

While many pro-Israel mouthpieces in the West rushed to praise Israel for its decision to allow Palestinians to build on their own land, the Palestinian people, however, received the Israeli decision with skepticism.

Many Palestinians believe the decision to grant Palestinians permits is nothing more than a PR stunt to stave off international opposition to its settlement expansion. Israel will most likely not follow through on its decision.

There are historical precedents for this. In 2017, the Israeli government announced plans for around 5,000 housing units in and around the Palestinian city of Qalqilya in the north of the West Bank. The plan never moved forward and was frozen by Israeli then-Prime Minister Benjamin Netanyahu.

In addition, in 2019, the Israeli government approved 700 building permits for Palestinians in what was widely seen as an attempt to quell international criticism for failing to allow Palestinian construction. Only six of the initial 700 buildings were given final approval, according to Peace Now, an Israeli anti-occupation advocacy group.

Similarly, with this recent Israeli plan, the vast majority of the 1,300 approvals are "initial approvals," and according to the Israeli media, based on statements from Israeli officials, the full approval process will take years to materialize. This opens the door for procrastination that will eventually lead to the alleged approvals simply being set aside.

Overall, these announcements are made by Israel every now and then, and are meant for international marketing rather than actual execution. It’s a stunt for Israel to embellish its image before the international community, and play its liberal allies in the West for fools. But the real outcome is always this: Israel doesn’t follow through with granting actual permits to Palestinians, and it has no intention to do so in the first place.

Even if Israel moves to approve most or all of the 1,300 permits, this would only meet a tiny fraction of the needed construction permits for Palestinians in the West Bank.

It’s a right, not a favor

Needless to say, the Palestinian people should not need a permit from Israel to build on their own land. Palestinian construction in the West Bank and East Jerusalem is a right and not a favor to be bestowed upon them by Israel. On the other hand, it’s the Israeli settlements in the Palestinian territories that are not only illegal but are considered war crimes by the United Nations.

The West Bank and East Jerusalem have been occupied by the Israeli military since the Six-Day War in 1967. Since then, Israel has continued to build and expand settlements in the occupied territories where now over 700,000 settlers live. Israeli entrenchment in the territories has made the possibility of a viable Palestinian state very slim.

Successive Israeli governments have also, for decades, demolished Palestinian homes and structures in the occupied territories, especially in East Jerusalem and Area C in the West Bank, leading to the displacement of hundreds of Palestinians, sometimes thousands, every year.

Israel has been escalating its demolitions of Palestinian homes in the past few years. Between June 1, 2020 and May 31, 2021, the Israeli military demolished 964 structures in the West Bank and East Jerusalem, displacing 1,241 Palestinians, including 655 children, and affecting another 5,789, according to the U.N. Office for the Coordination of Humanitarian Affairs (OCHA). The number of demolitions is the highest since the OCHA started recording demolitions.

The majority of the demolitions take place in Area C, which makes up over 60% of the occupied West Bank, and is under full Israeli security and administrative control. The demolition orders are issued under the pretext that these Palestinians homes and buildings have been built without an Israeli permit.

Regarding the Israeli settlement plans, the situation continues to get worse. The Israeli government is also currently advancing plans for new and extensive settlement projects in the most critical areas in the occupied territories. The Israeli authorities in mid-October advanced plans for 9,000 housing units in the Atarot settlement, 3,400 units in the E1 area, 1,257 units in the Givat Hamatos settlement and 470 units in the Pisgat Zeev settlements. The construction in these areas has long been considered a red line by the international community as it means catastrophic implications for both the two-state solution and the establishment of a Palestinian state.

The Israeli authorities are laying the groundwork for rapid settler growth in these areas, in an incremental manner without any action, or any pushback, by the international community.

So, the newly announced approval for some Palestinians permits, even if true, pales in comparison to Israel’s increasingly aggressive colonial actions in the occupied territories, and no one in the international community should be thrown off by this PR stunt.

Even if Israel grants the abovementioned 1,300 construction permits to the Palestinians, this is not something that should be lauded as these areas are occupied Palestinian territories, and the Palestinians shouldn’t need a permit from Israel, to begin with.

Journalist based in Palestine
RECOMMENDED