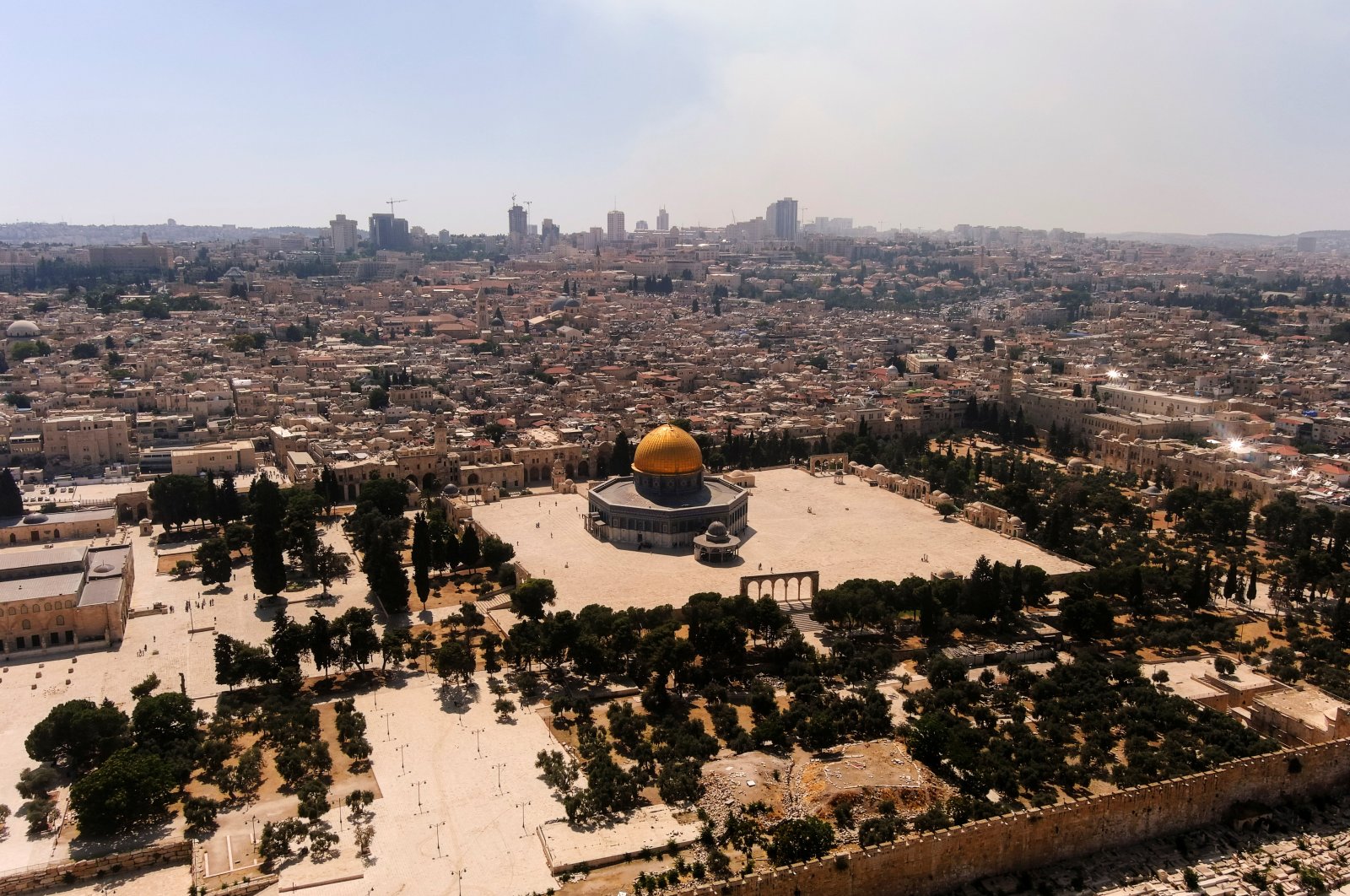 On his part Nabil Abu Rudeineh, spokesperson for Palestinian President Mahmoud Abbas, said that East Jerusalem, with its Islamic and Christian holy sites, will remain the eternal capital of the State of Palestine, in accordance with international legitimacy resolutions and international law.

“It is not possible to achieve security and stability in our region, as long as Israel continues its war on our people, their land and their holy sites, and as long as it deals as a state above the law and rejects the resolutions of international legitimacy and the foundations of the peace process.” Abu Rudeineh stressed.

“The only way to achieve stability and lasting peace is through the fulfillment of the legitimate rights of our Palestinian people, foremost of which is the establishment of their independent state with East Jerusalem as its capital,” he added.

Palestinians look for East Jerusalem as their future Palestinian State capital and under international law, the de facto annexation of East Jerusalem by the Israeli government is considered illegal.

Within the context of Israel’s colonization of Palestine through unilateral action and with its own illegal laws, Israel has implemented since 1948, a campaign to erase Palestinian presence from Jerusalem and establish full control over the city.

Israel’s actions toward the city, from beginning to move its government ministries to West Jerusalem in 1949, to redrawing the municipal boundaries of the city in 1967, followed by its 1980 widely-criticized “Basic law” declaring “Jerusalem, complete and united” as the capital of Israel have all been aimed at establishing irreversible facts on the ground before concrete action is taken by the international community.

On the other hand, Israeli parliament has played a significant role in furthering Israel’s demographic control plans and reinventing a Jerusalem that fits one narrative and one people only, the Zionist-Jewish narrative.

In addition, Israeli laws (which at times begin as bills before Israeli parliament) have further entrenched Israel’s illegal claim to the Holy city.

Throughout its occupation, Israel has enacted discriminatory legal and political policies to diminish the presence of the Palestinians in East Jerusalem and has engineered a clear governmental policy in order to maintain a demographic balance of 60% Jews to 40% “Arabs” within the Israeli declared boundaries of the Jerusalem municipality – which it unilaterally declared as the unified capital.

East Jerusalem Palestinians living in their own city are in fact stateless as they hold an Israeli residency permit known as a “Blue ID” and a Jordanian travel document while they are not citizens of either and any absence from Jerusalem, for study, work or marriage, as well as the holding of another citizenship can lead to the withdrawal of the Israeli residency permit.

Besides, the expansion of Israeli settlements in and around East Jerusalem amid the forcible transfer of Palestinians from the city, is a part of a continuing effort to displace and dispossess Palestinians in Jerusalem, thereby feeding into Israel’s calculated efforts to alter the legal status, character, and demographic composition of the city, in violation of its protected status under international law.

Al -Aqsa is the third-holiest site in Islam, also known to Muslims as Haram al-Sharif, and serves as a powerful symbol for the Palestinians.

The Holy Al -Aqsa compound has been at the heart of tensions in the city since Israel’s occupation and exceeding violent incidents recently have raised the alarm not only among Palestinians but also in the Muslim community throughout the world, which have charged that Israel is not fulfilling its obligation to protect the site and the Muslim worshippers there but is rather seeking to destroy the Muslim monuments in order to "Judaize" the area.

Since its military occupation of East Jerusalem's Old City, Israel has accepted that a Palestinian-Jordanian institution, the Islamic Waqf, will administer the site, including tours for non-Muslims, refurbishments and maintenance, and appointing guards.

However, Israel has been adamant since 2015, as it curbed the control of the Waqf, emboldening Israeli settlers' tours and giving the green light to "silent" Jewish prayers being held on the site.

Palestinians fear Israel will allocate specific times for Palestinians to enter Al-Aqsa to pray in designated areas and assign other times for Israelis and dedicate areas for them to pray.

Al-Aqsa would end up being similar to the Ibrahimi Mosque in Hebron, south of the occupied West Bank, divided in time and space between Muslims and Jews since the 1990s.

In the past months, Israeli forces continuously raided Al-Aqsa, violently assaulting Palestinians and emptying the mosque to allow settlers to storm the site.

Since the former Prime Minister Benjamin Netanyahu, the Israeli Prime Minister's Office became directly involved in Al-Aqsa by controlling the permits given to parliament members who wished to enter the site.

The Waqf's control has increasingly seen an Israeli clampdown since then, by preventing it from appointing guards without the approval of Shin Bet and all the while, Israeli settlers and far-right activists have been allowed to storm the Al-Aqsa in growing numbers, especially during Jewish holidays.

Among the visitors in the past weeks was Itamar Ben-Gvir, leader of a small ultranationalist opposition party and a follower of the late racist rabbi, Meir Kahane, who entered with dozens of supporters with a heavy police cover.

On regular days, settlers are allocated two times at which they enter the mosque almost daily, guarded by heavily armed forces.

The number of visitors has grown steadily over the years. In 2009, 5,658 settlers entered the mosque in such storming.

Subsequently, events in and around the site were repeatedly brought to the attention of the Security Council and other international bodies with urgent appeals to ensure the protection of the Holy places and the Muslim worshippers.

Undoubtedly, the failure of the international community to take genuine action to counter Israel’s pervasive violations of international laws have directly contributed not only to maintaining the status quo, in favor of the Israeli occupying authorities but also, to the deteriorating situation on the ground.

Besides, the recognition of Jerusalem as the capital of Israel in December 2017 by then-U.S. President Donald Trump was a clear violation of the city’s status under international law and the culmination of 74 years of illegal Israeli actions towards permanently altering the status of Jerusalem.

In response to Trump’s decision, the United Nations General Assembly (UNGA) in December 2017, affirmed that any decision and action which purport to alter the character, status or demographic composition of Jerusalem have no legal effect, are null and void, and must be rescinded in compliance with relevant resolutions of the Security Council, and in this regard called upon all States to refrain from the establishment of diplomatic missions in Jerusalem.

On its part, the U.S. officially opened its embassy in Jerusalem on 14 May 2018 disregarding the international community which failed to follow through with sanctions, thus Guatemala, Honduras and Kosovo were encouraged to follow in the American footsteps and move their embassies to Jerusalem.

Despite a tremendous number of UNGA and Security Council (UNSC) resolutions condemning Israeli policies in East Jerusalem, little action has been taken to help the Palestinians achieve their rights in the city and end the prolonged Israeli belligerent occupation.

Jerusalem remains the main challenging issue of the Palestinian-Israeli conflict and it is only by recognizing Jerusalem as the capital of Israel and Palestine can lasting peace be achieved.