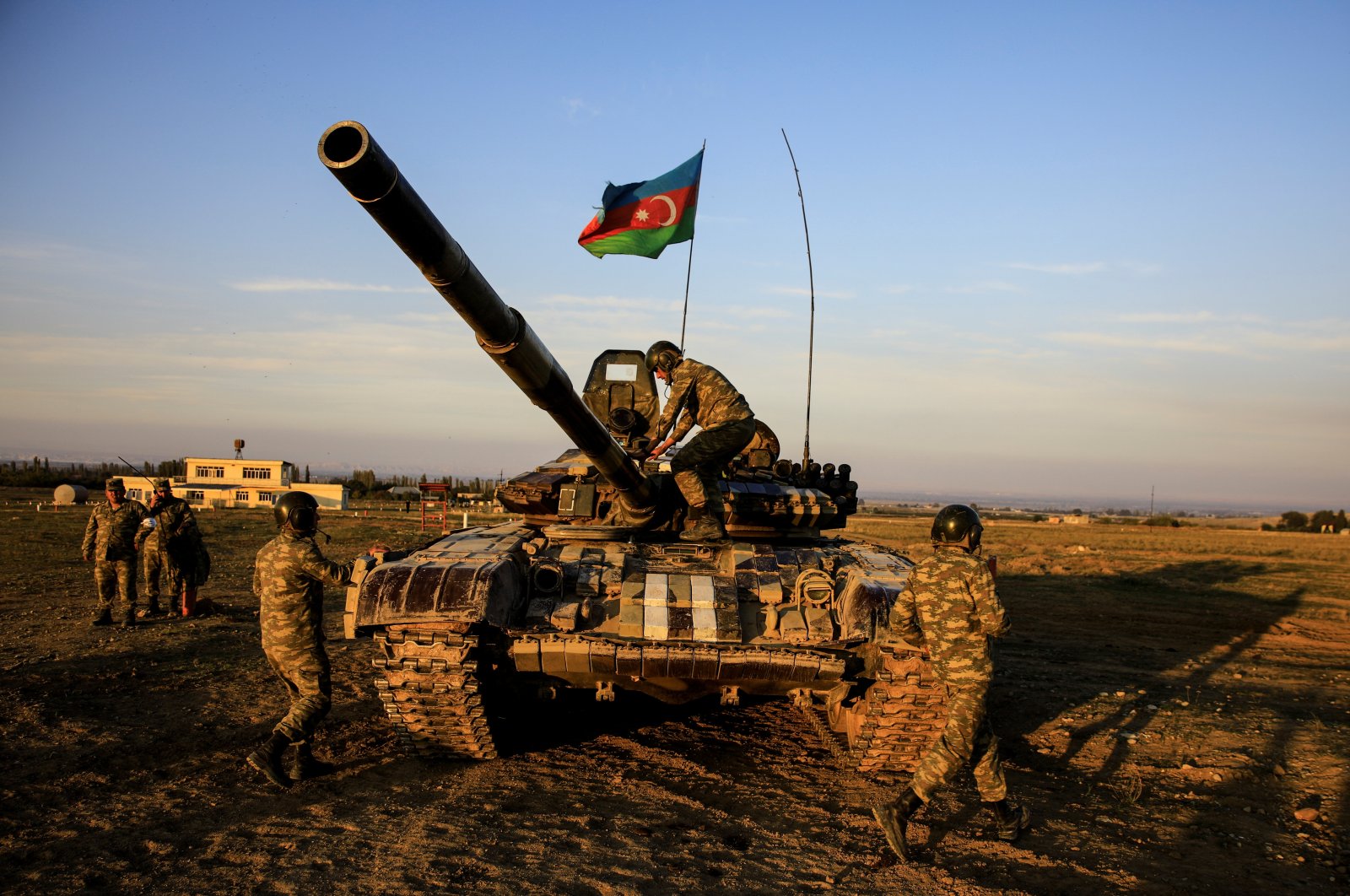 Azerbaijani soldiers at a military training and deployment center amid the Nagorno-Karabakh conflict, near the city of Ganja, Azerbaijan, Oct. 23, 2020. (Reuters Photo)
by Seymur Mammadov
Oct 27, 2020 12:05 am

Since the beginning of the resumption of hostilities in the Nagorno-Karabakh conflict zone, the Armenian and Russian media have consistently accused Turkey of providing direct military support to Azerbaijan. We are talking not only about the participation of Turkish military personnel on Azerbaijan's side but also the Syrian militants who were allegedly transferred to the conflict zone with Turkey's support. Azerbaijani President Ilham Aliyev has repeatedly stated in interviews with various media channels that there is no need to attract mercenaries to the Karabakh conflict zone.

Firstly, the 100,000 men of the Azerbaijani army are equipped with the latest technology, Azerbaijani officers have also passed special courses in the best paramilitary institutions in Turkey. Secondly, the morale of both the military and the population living in the combat zone is extremely high. Sooner or later, this war had to start because Armenia could not endlessly keep the Azerbaijani lands under occupation. The Azerbaijani society was psychologically prepared for the fact that this war would one day start, and that day has arrived.

What is happening in Karabakh today is the expression of the will of the Azerbaijani people. The military-political leadership of Azerbaijan and society pinned great hopes on the Minsk Group, set up in 1992 by the Organization for Security and Co-operation in Europe (OSCE), which, as it turned out, had been conducting senseless negotiations on Karabakh for almost 30 years and as a result, could not force Armenia to comply with four U.N. Security Council (UNSC) resolutions. For Azerbaijan, it is a patriotic war, and for Armenia, it is a war of conquest.

The ineffective work of the Minsk Group and the destructive policy of Armenia ultimately led to today's war in Nagorno-Karabakh. Now Azerbaijan itself is implementing the UNSC resolutions. On Oct. 14, 1993, at the height of the Karabakh war, the UNSC adopted Resolution No. 874, obliging Armenia to withdraw its occupation troops from the territories of Fuzuli, Jabrayil and Gubadli regions.

Azerbaijan itself has already partially implemented this resolution, liberating the cities of Fuzuli and Jabrayil from the Armenian occupiers. Having liberated the city of Gubadli, Baku will complete the implementation of this resolution. Armenia had the option to return the occupied territories in Karabakh back in the early 2000s, but a corresponding geopolitical situation was needed and now such a situation is ripe. In this case, taking into account the above, the question arises, what is the point of attracting foreigners to the conflict zone of Azerbaijan, if the military and economic power of Azerbaijan, as well as the morale of the military and the people, is much higher than Armenia's?

But I am also interested in another question. Why does Russian media accuse Turkey of providing military support to Azerbaijan? So far, neither the Armenian nor the Russian side has provided any evidence about the participation of Syrians or Turkish military personnel.

For some reason, President Recep Tayyip Erdoğan's emotional statements in support of Azerbaijan are taken as proof of Turkey's military intervention in the conflict by the Armenian and Russian media, though it is known that Ankara provides only moral and political support to Baku. Yes, it is true that the Azerbaijani side uses Turkish-made weapons in hostilities, just like the Armenians who use Russian weapons in Karabakh. Moreover, during the active phase of the confrontation, a huge amount of weapons are being transferred from Russian cities to Armenian territory. Baku's official data show that there are flight maps and certain types of weapons being sent to Armenia.

Therefore, the accusations against Turkey are simply ridiculous. The Russian media should first think about why Moscow is intensively arming Yerevan at the height of hostilities. Russia may have many reasons to support Armenia militarily, but there is no reason to punish Azerbaijan for military actions in occupied Karabakh.