Let Greta be: The climate change and beyond 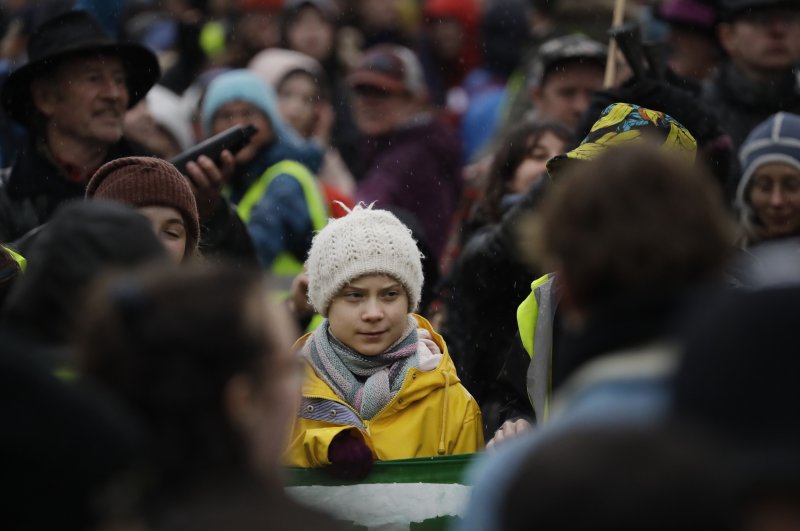 Climate activist Greta Thunberg, from Sweden, center, stands with other protestors as she participates in a school strike climate protest in Bristol, south west England, Feb. 28, 2020. (AP Photo)
by Usman Masood Mar 04, 2020 12:05 am

No one can hide the truth that the situation of our environment is worsening and requires urgent measures. But, Greta's campaign for it, unfortunately, merely seems a media sensation

Take a crisp cookie-base of morality, pour a cup of a burning hot issue on it, add a tablespoon of sugar, with a pinch of spice and serve it simmering in a mold. The aim is for the taste to be consequential, in whatsoever sense, with whatever it takes.

If nothing else works, make a beautiful child serve it. You never know if, on some lucky day, the devil is killed by the resplendence of the optics. But wait! Who cares about the devil when there is a fortune to make?

Of course, it has to be a young, defiant girl like Greta offering the perfect representation of resistance of the young generation against the reckless excesses of the older, powerful and, perhaps, macho men, who wreaked havoc on our beautiful planet, without even a shy afterthought, let alone regret or an effective plan for redressal.

The latter kind does not need any construction, of course. We have such people in plenty around us. The insolence of, His Foolhardiness, if I may, Mr. Donald J. Trump, is an exemplar par excellence. Of course, his case comes in handy to strengthen the narrative of a conscientious defender of the planet, like Greta, against his likes. And ironically, that delineation is not completely untrue.

The technological breakthroughs that led to the industrial revolution and the socio-economic development that came with it – where it did – could have been a precious gift of nature. They allowed standards of living that even the aristocrats of the past could only imagine.

But never before the industrial revolution had the planet been abused so brazenly, with such pretense of normality; even less, abuse on anything nearing this scale.

Today the world produces at least 100 times more output than that in the 19th century, but we are having to pay its cost in kind in terms of environment i.e the ecological footprint. The concentration of carbon dioxide – the major earth-warming greenhouse gas – today is the highest in the last 3 million years. Any further warming of the planet is going to be catastrophic, with erratic rain, typhoons, more droughts and more floods in various parts of the world. It directly threats inundating countries like Bangladesh and Maldives, hitting the poorest of the poor, the worst. Responsible consumption and resistance to the short-term commercial interests of the few is an obligation upon us all. It’s an emergency.

That said, the instrumentalization of an innocent young soul to that end, even if offering a tinge of purity and a touch of sentiment to the movement is not innocuous at all and Greta, here, ultimately plays out into the hands of the very commercial interests. She is waging a war, albeit of a more obscure kind. Nothing may justify her deployment as a human shield, which is a subpar resistance-form if anything and has resulted in a convergence of vicious attacks on her from a very diverse category of people.

At the age of 17, she has faced way more than most girls of her age. Trump told her, “to work on her anger management problem” when she was chosen as the Time’s person of the year 2019. Andrew Bolt, a commentator who revels wallowing in controversies, expressed surprise over people heeding to her "climate panic," even going as far as to say that she "suffers from all sorts of mental problems."

Recently, a comedian took a jibe at her in the grossest of terms, which doesn’t even qualify being restated here. You will have a new low for every day if you follow it. This in part explains why her, arguably rational, parents were against her getting on the frontline of climate activism.

There is no denying the fact that Greta feels strongly about the environment and climate change. But Greta may not be an outlier there. She is extraordinary but not without an unmistakeable element of construction in her persona. Her impassioned speeches may be the voice of her heart and backed by science as she says. But between one’s inner voice and its effective articulation to the world lies a space that is bridged essentially by art. Has she had a genuine autonomy there?

It is unsettling how we are ready to ax our young ones at the altar of activism for purely selfish gains. Activism has grown into yet another industry with all sorts of privileges and perks attached. When Greta speaks people have got commercial gains to make. They essentially will back her very real voice for their own interests. Whether or not her voice is successful in shaking the conscience of the world, optics, wherever they are, pay these interest groups. How well does she appreciate the complex interplay between her deep-felt concern for the planet and the narrow, material, objectives of many of her backers?

Of course, a view like this will be conflated with feminist, if not an environmentalist defense. Many would argue that Greta is strong, has her own views, and does not need any sticks to guide her on what to do and what not to do. But how are the carrots hurled her way – like in the case of Malala Yusufzai before her – be defended by the very same token of reasoning? Such arguments are utter boloney, and merely a part of the greater design which goes into the making of such activists. The cloak of empathy and the lure of sincerity is the most corrupt, among all kinds of influences.

Greta did the right thing, Greta is doing the right thing, more power to Greta, by all means. But what if Greta – a girl actually concerned about the environment – questions Greta the poster-girl of climate resistance someday? That Greta will never be able to behave like an ordinary girl should be a bigger concern for us than any impending disaster to come one day.

* Lecturer in the Department of Social Sciences at SZABIST University, Islamabad, and currently pursuing a Ph.D. in economics at Ibn Haldun University, Istanbul

Lecturer in the Department of Social Sciences at SZABIST University, Islamabad, and currently pursuing a Ph.D. in economics at Ibn Haldun University, Istanbul
RECOMMENDED