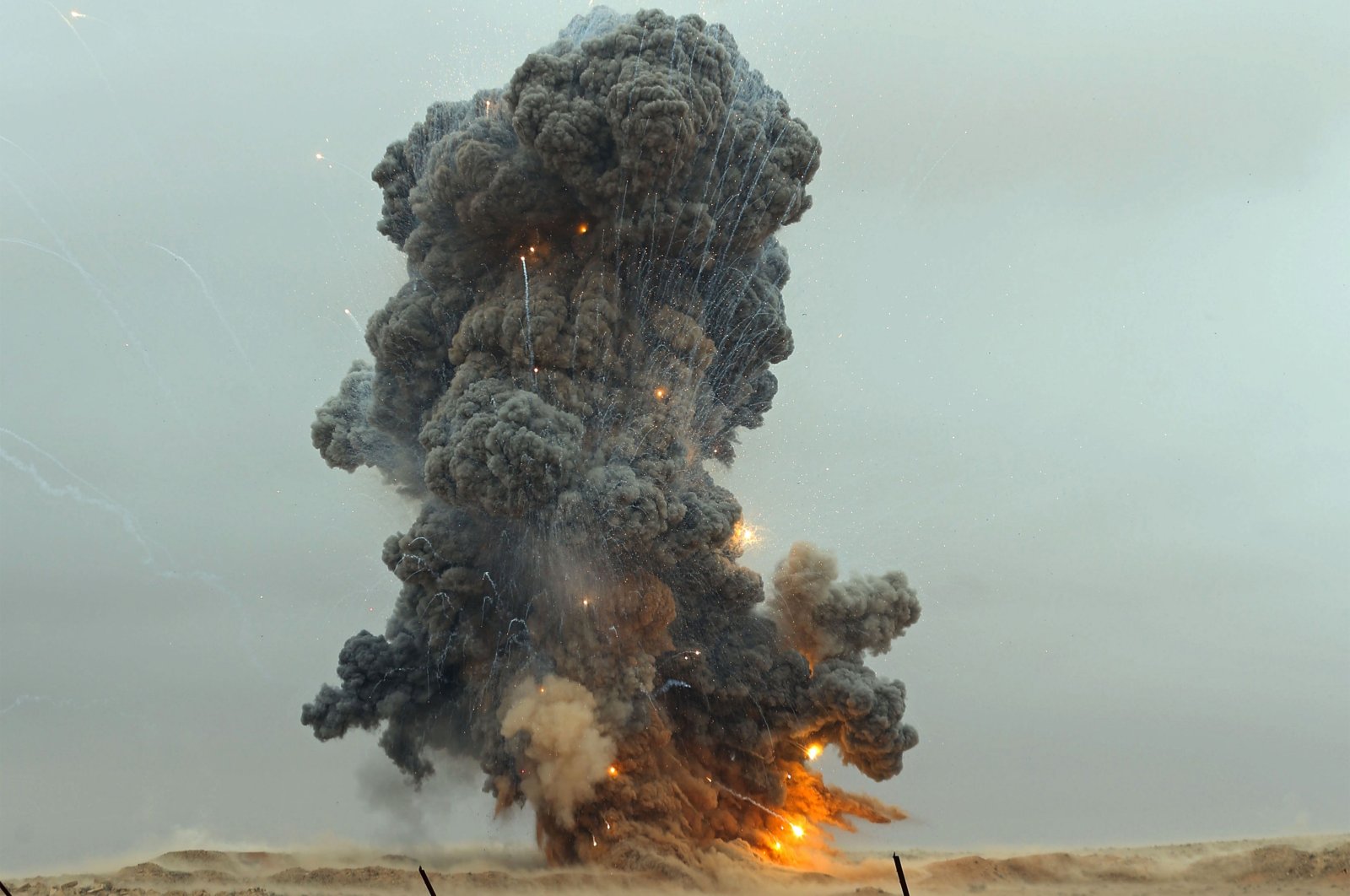 Military engineers of the U.N.-recognized Libyan Government of National Accord (GNA) detonate an explosive device, uncovered from areas south of the capital Tripoli, Oct. 12, 2020. (AFP Photo)
by Imad Atoui - Rania Khalouta Oct 20, 2020 12:05 am

Libya is preparing for a wary political solution. Despite a normative political solution to the Libyan conflict, a surprising resignation announcement and mass protests took place in the territory of the U.N.-backed Government of National Accord (GNA).

The citizens of the western territory of Libya, governed by the GNA, started taking to the streets to protest against the dysfunctional government amid the coronavirus pandemic. While people sought the GNA's incumbent Prime Minister Fayez Sarraj’s departure and wanted a better quality of life, some militia capitalized on the situation and shot protestors.

Amid the rising protests and the political resolution that resulted from the Morocco and Switzerland talks, Sarraj announced his desire to resign in the upcoming days. It is puzzling that instead of taking part in the political resolution between the GNA and its opponent Aguila Saleh Issa, the speaker of the Tobruk-based House of Representatives in eastern Libya, the decision of resigning swept the media.

In fact, Sarraj’s resignation was pretty expected. It is just that this reaction has one of the two meanings: a fait accompli that he has to deal with by proceeding with some decision, resignation being one of them or a strategy that decision-makers in the GNA along with their allies wanted to make in order to speed up the political process by which they would exclude Gen. Khalifa Haftar’s wing and avoid further turmoil.

Despite having different connotations, both the fait accompli and the strategy have common reasons. The main reason is to save and maintain the GNA as a political institution. It seems that Sarraj fears that the protests within the GNA territory could be manipulated and used by different players against his government after the GNA has succeeded strategically in reducing the influence of some external players.

For instance, Russia wants to come back politically through a different political figure after it lost the game with Haftar, and France also wants to hamper the strategic ties between the GNA and Turkey.

Another reason is to calm down the protests that have been taking place by opening the political landscape to other figures. We have to keep in mind that Sarraj’s resignation came only after his inability to provide solutions to the many problems concerning the service sector like electricity cuts, the lack of liquidity and the accumulation of garbage on the streets.

Besides that, by resigning, Sarraj would also speed up a political rapprochement between the GNA and the eastern wing headed by Saleh. Sarraj also figured out that it was time for new figures to jump in and he should leave the political arena to other Libyans.

Last but not the least, his resignation announcement came due to external pressure and accusations against him, particularly from France and some regional countries.

While the political image seems opaque for some, some started debating who will replace Sarraj. It could be Interior Minister Fathi Bashagha, though there is no clear expectation about who could replace him since he is not absolutely certain himself about whether he will resign or not.

In other words, Sarraj announced a "passive" resignation, and this stipulated progress in negotiations for a new government, arrangements for which are currently underway in Switzerland and Morocco. This means resignation with conditions.

Meanwhile, despite the announcement, Sarraj’s resignation would depend on security in Tripoli and political challenges within the GNA. The GNA is facing a survival challenge amid local protests and different external agendas.

The question remains: Can Sarraj really keep his word if he feels that the external dispute is shifting to locals in Tripoli in front of his eyes?

Sarraj's departure would trigger a political dispute between the different actors in the GNA like those in Tripoli and those in Misrata. In fact, the political landscape in Tripoli is quite fragile. The dispute within Tripoli is likely to intensify between different groups, particularly after the announcement of the cease-fire that drove out many and included only a few actors. The likely dispute would be a projection of the excluded actors that seek political tenure in the political resolution process.

Thereby, the game of external actors is presumably to find a local arena in Tripoli. Amid the resolution process, the borders between winners and losers have already been drawn. While winners push for a political say in the future of Libyan politics, losers combat fiercely to have their political say back after they already had their voices heard militarily.

In this circumstance, statesmanship matters. If all these challenges are not calculated within fait accompli and the political strategy, Sarraj in Tripoli would not last. Sarraj’s resignation does not only help progress negotiations for a new government but also arrangements between external key players in Libya. In other words, if Sarraj resigns, would we argue again that the external players still hold the fate of Tripoli and the strongest will get the last word?