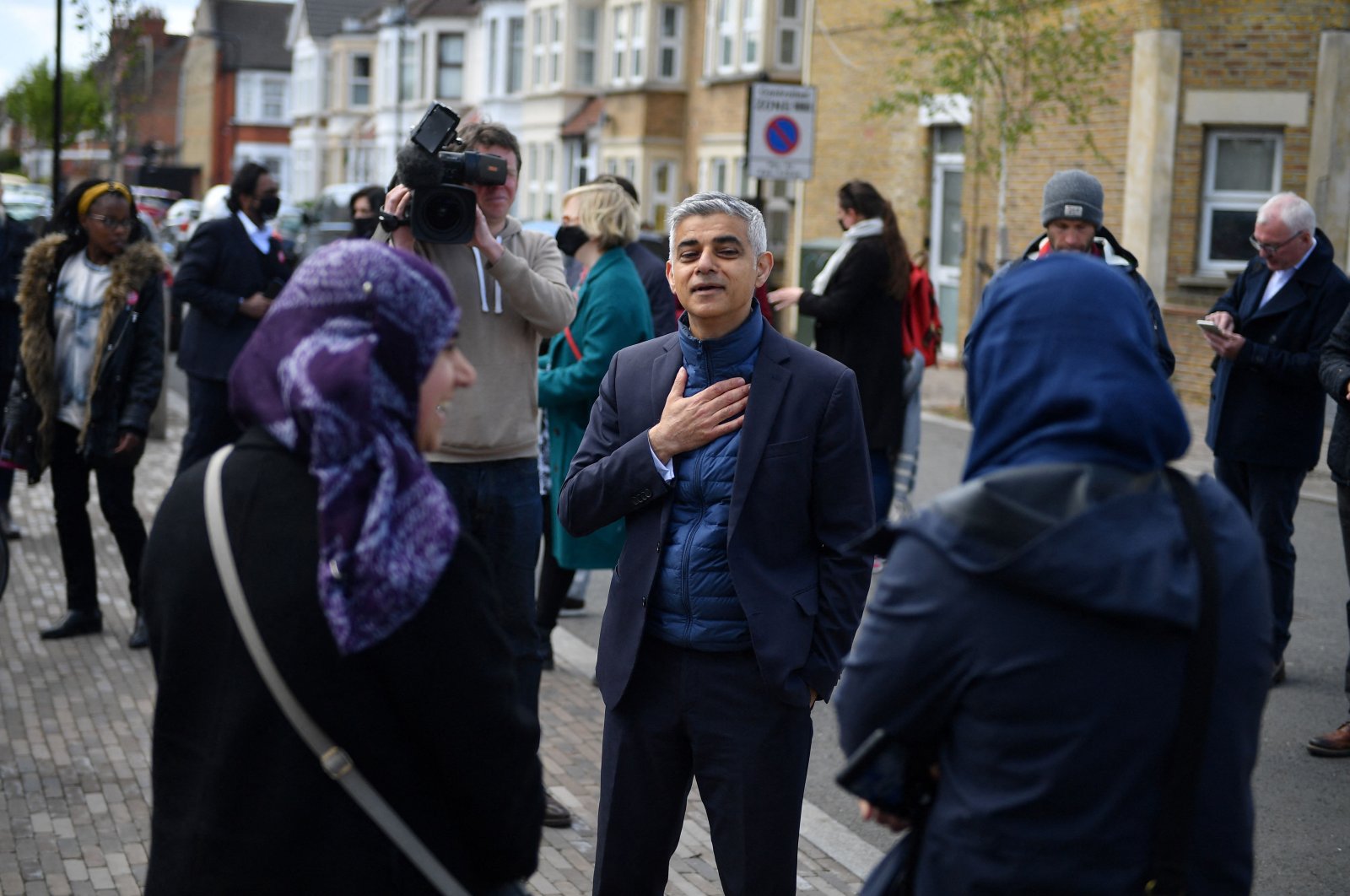 London Mayor Sadiq Khan (C) chats with locals as he campaigns ahead of the London mayoral election, in Waltham Forest, northeast London, U.K., May 5, 2021. (AFP Photo)
by Klaus Jurgens May 11, 2021 12:05 am
RECOMMENDED

The color red has recently become a synonym for travel alerts due to the COVID-19 situation. Since 11 p.m. local time last Saturday, it resurfaced in one of its more traditional settings: Red stands for the Labour Party winning London.

It is a significant victory indeed as the mood in a nation’s biggest city allows for deeper insights into which issues are really important to ordinary citizens.

This brief analysis tries to shed light on how Khan’s success mirrors London’s reputation as one of the world’s most multicultural and cosmopolitan cities and whether the vast Turkish community will benefit or not.

Local elections are often the real indicator for how a particular political party is viewed by the electorate. After all, it is in our neighborhoods where we are impacted most by what elected office holders are up to regardless of talking about planning an overpass a mile away at a council meeting or deciding to increase value-added tax in the national parliament.

Besides, candidates without any affiliation to mainstream parties might jump in and try to cash in on voter dissatisfaction with how the central government is managed.

London is not any different – as a matter of fact the Greater London metropolis of over 8 million people is composed of many "local" districts or boroughs as they are called over here (32 to be precise plus the city of London), hence referring to Thursday’s poll as if it was just a single voting exercise in a single constituency is utterly misleading.

Some boroughs are "red," others "blue" or "green" and so on and so forth.

At present, there are just over 600,000 residents of Turkish descent living in the U.K. The absolute majority, however, decided to come to London and settle here; hence one would assume well over 500,000 people belonging to that demographic group are currently in town.

That would in all likelihood result in between 7% and 8% of all of today’s Londoners having Turkish origins, a figure not to be overlooked by any politician and decision-maker.

The fascinating thing when writing about London’s Turkish community is that it is actually a typical London community and said without any disrespect; in principle nothing unusual or special.

People come to London hailing from all four corners of the globe and the notion of "being foreign" is rather uncommon to any real Londoner. It is for sure not easy to move to the capital from another country as London is prohibitively expensive, but it has never lost any of its pulling power.

When speaking with citizens of Turkish descent one often hears comments such as "here, everyone is welcome" and "everyone can make it here." Needless to say that landing in a town with a huge support network including one's native language is a welcome bonus.

But let us now approach the key issue for this article: Is the color red a good color for the Turkish community?

Bar a few exceptions of the rule, most citizens with Turkish roots would not wish to be seen as importing Turkish politics or arguments to the U.K. They rather align themselves with one of the major political parties here – if at all – and prefer to integrate as fully as possible. In turn, the wider London population enjoys very close relations with the Turkish community.

So which issues are at the heart of the Turkish matter?

First, education: Turkish parents expect that their children are treated as 100% equal when compared to "native natives." In particular, the tertiary part of the education system is world class. But it helps if in any given class there are more than just the token "international" student, and let us not forget that in a metropolis many teachers have migratory backgrounds, too.

Second, respect: Whereas in some parts of the country foreigners are at best welcomed as paying tourists, in London they are an integral part of the social fabric. As a matter of fact, without the huge international influence London would just be a boring financial center with a few historical add-ons.

Third, no discrimination at the workplace: The author of this opinion page contribution can confirm first hand that there are up until this very day towns scattered across the U.K. where the only foreigner around is either the Italian pizza parlor manager or indeed a Turkish fast food outlet owner. Integration level: too low for zero, not because they do not wish to integrate but because they are given no chance whatsoever.

Fourth, the chance to engage in one's traditions and customs without being looked down upon: For example, a stroll along one of Stoke Newington’s streets and thoroughfares at once seemingly transports us to any modern Turkish high street. There are shops, restaurants, mosques, cultural centers – you name it.

But all of them are intended to make the Turkish community feel at home, not to segregate them from their fellow Londoners. Many people with completely different backgrounds enjoy eating out and shopping here and in the other parts of London where Turkish residents meet and mingle.

The fact that London stays "red" will in all likelihood be advantageous for its Turkish community. Coming back to my four points made in the preliminary chapter, here in London most schools are multicultural and multiethnic anyways – you are not the one and only foreign student in any given educational environment. But nevertheless, you have to become fluent in English – integration is not a one-way street.

The issue of respect is not an issue at all in the city. It is probably the most internationally composed metropolis anywhere in the world including New York. But the same as with topic number one – integration – respect demands constant alert to be courteous to others in the same manner we wish to be treated.

Talking about jobs and the workplace a fascinating development is to be observed: Many residents of Turkish descent at home in London open up shop themselves and become proud employers, meaning the tide is gradually turning.

And last not least, in a city with hundreds of different cultural backgrounds, and if I am not mistaken each and every nation of our shared planet represented, having a chance to keep your traditions alive while fully embracing a new world is made possible.

A mayor such as Khan will know only too well that hailing from a migratory background no matter how long you have lived in your new fixed abode is an uphill struggle day in, day out. The issues we have raised here in this article sound easy to be taken care of on paper, but the reality out there might differ dramatically.

The reasons why 90% of all citizens of Turkish descent opt for the capital are because their key demands are met here and not necessarily in a more rural setting.

And Turkish people are apparently exactly like their fellow Londoners: in a more rural setting Prime Minister Boris Johnson’s Conservatives fared extremely well in England (not at all in Wales or Scotland though). The rural setting plays host to the real Brexiteers, thus a much more nationalistic setting.

Citizens of international flair and flavor of course prefer a cosmopolitan, multicultural location. Khan seems to have played his cards very cleverly, and both "traditional" Londoners and "new arrivals" have said yes to red once more. Whether he will deliver in his second term in office remains to be seen – the Turkish community will closely monitor and watch events and perhaps take sides like everyone else in town. After all, it is their city as it is everyone else’s.