Macron and COVID-19: What are the aftereffects in France? 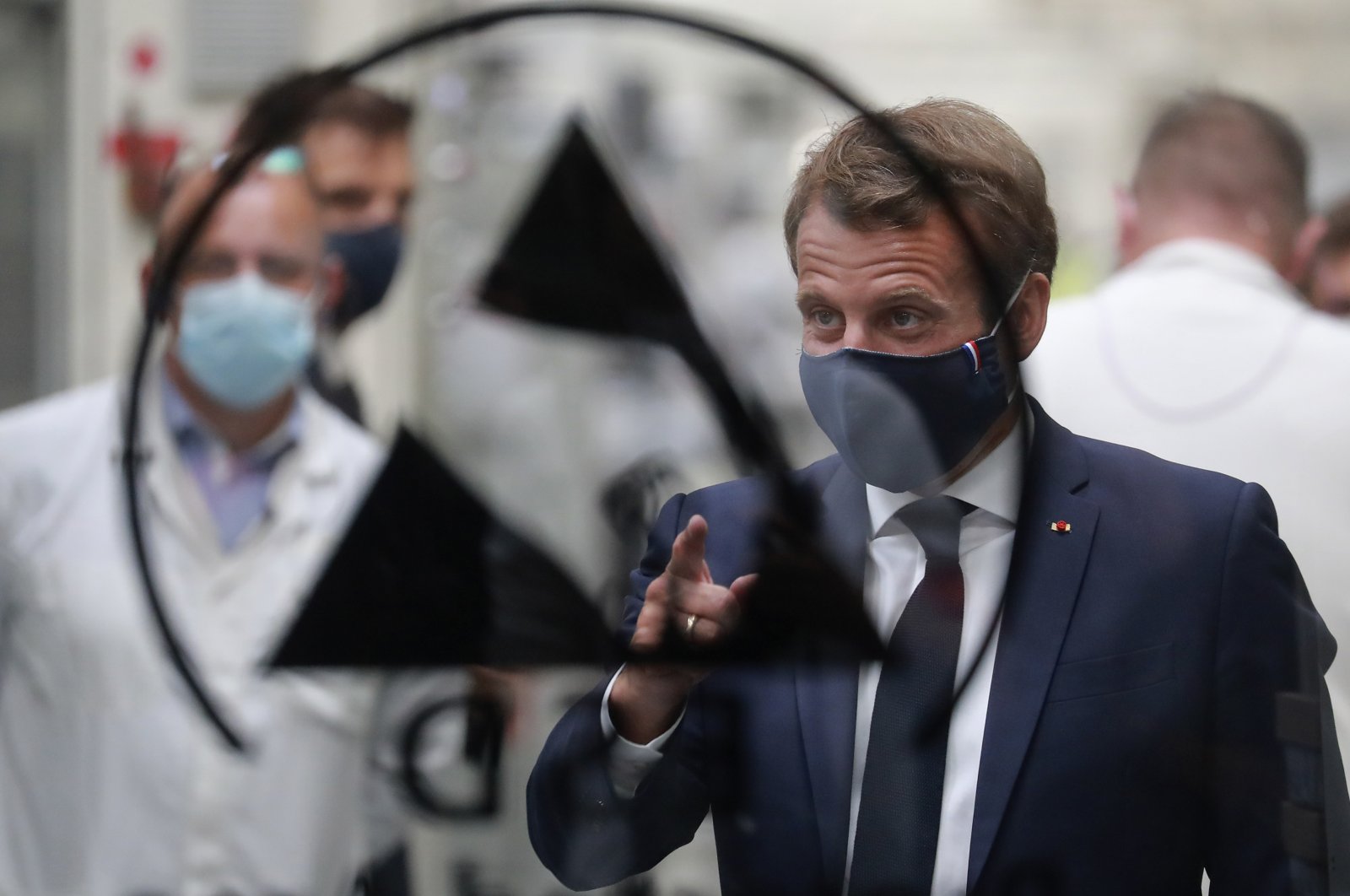 Five years ago, the noun “shock” was the reaction most clearly expressed on the front page of le Figaro and l'Humanite – the two French daily newspapers that are diametrically opposed ideologically. France's political establishment found itself cornered and "shocked" as the right and left-wing papers titled their front pages on Dec. 7, following a regional election in 2015. The initial "shock" was the presidential election of April 2002, when Jean Marie Le Pen qualified for a runoff against then-incumbent President Jacques Chirac. Fifteen years later, in May 2017, it was the daughter of Jean Marie Le Pen, Marine Le Pen, in a face-off against then-candidate Emmanuel Macron, who like Jacques Chirac won in a landslide victory with the vote of so-called French republican conventional front. As a result, Macron imploded the house of the Socialist party and exploded the party of the Republicans, who are still suffering a political identity crisis in the aftermath of the outcome of last summer’s European election.

France is wounded, unemployment is skyrocketing and French politicians are confused about which path they should take in the wake of the COVID-19 crisis. Today, Macron’s government and his la Republique en Marche (LREM) party are feeling the rising tide of a political tsunami. Lately, seven LREM members of Parliament have decided to split from Macron's LREM to joint the new "Ecology, Democracy, Solidarity" (EDS) group that means LREM now only has 288 members of Parliament, one short of the 289-threshold needed for an absolute majority and down from the 314 that Macron had when he burst onto the French political landscape in 2017.

“Unbelievably shocking images indeed,” Premier Edouard Philippe declared to the media in his visit to the Paris Police Operation Center on Saturday afternoon during the Yellow Vest social movement riots in Paris in December 2018. New polls show that French confidence in the president, his government and its handling of the COVID-19 pandemic has dropped sharply.

The confidence and leadership

Figures show that people are split with regard to the full relaxation of lockdown measures on June 2. On March 16, Macron gave a 30-minute televised speech on the public health care crisis caused by COVID-19. “We are at war,” he declared solemnly, repeating five times that France is at war. But the uplifting, patriotic speech, amplified by many commentators and opposition leaders, cannot obscure the reality that this health care crisis is the consequence of decades of bad public policy, notably on health care and the medical care system. Figures have also shown that confidence in leadership has taken a serious hit. Only 48% have confidence in the government taking effective measures to end the coronavirus pandemic, a drop of 10 points compared to last month. That's despite Macron's announcement on April 13 to gradually lift the lockdown from May 11 onward. Only 45% have confidence in the government's ability to give trustworthy information about the timeline for lifting lockdown measures, and 57% feel the government has not introduced enough necessary measures since the onset of the crisis.

Philippe said in a press conference that life would never be the same again. Interestingly, most people said they support limits to their freedoms, unlike other European nations, i.e., Sweden. In terms of the workforce, 92% wanted to continue working from home even after the lockdown was relaxed on May 11. For three years now, Macron has been working to get rid of the 35-hour workweek and worker protections against unfair dismissal. "Today, his government is using the coronavirus lockdown as a pretext to push ahead with this agenda and allow bosses to unilaterally undermine labor conditions and rules," argued the General Confederation of Labour's (CGT) chairman on the national media. Despite protection actions due to COVID-19, the question of the well-being of public health professionals and the system were raised because of bad crisis judgment and management, and the shortage of staff, equipment and beds in intensive care. France has registered to date, 151,000 confirmed cases, 68,268 recovered cases and 28,828 deaths.

Subsequently, the full lockdown relaxation measures started on June 2 after partial lockdown relaxation on May 11, and people returned to work, while public transportation resumed and primary school logistic and management kicked off. Around 64% of the students’ parents did not believe this was a good idea, and the country's education minister told the media: "Pupils are safer at school than home."

The government seems lost, like in the pre-lockdown period, where the obstinacy of Macron and the stubbornness of his premier has enflamed on national and social media regarding the question of tests for all. Controversial French Dr. Didier Raoult, head of the department specializing in infectious diseases in La Timone hospital in Marseille, announced, together with five professors and doctors, that anyone feeling feverish or simply anxious could ask to be tested at the clinic. Worried patients wearing masks formed a line spanning several streets outside the hospital in the French Mediterranean port city.

Young and old alike all maintained the new social distancing guidelines strictly to get tested for COVID-19 at Dr. Raoult’s clinic. The French health system was carrying out 5,000 tests every day. But officials admit this is nowhere close to reaching every case, meaning the real number infected could be much higher than the published data, which is announced every evening by Dr. Jerome Salomon, the French director of general health.

The French policy is to stay at home in isolation if a person fears having the disease and to only go to the hospital in case of breathing difficulties. Raoult, 68, is a member of the expert committee advising the French government on the coronavirus. He reported that after treating 24 patients for six days with hydroxychloroquine, the virus had disappeared.

Opportunist politicians entered the debate. The mayor of the city of Nice, Christian Estrosi, a Sarkozyist, went on national TV during the first weeks of the pandemic, saying he did get treated with chloroquine after being diagnosed positive with the virus, and he vehemently defended Raoult’s test-all policy. Lately, the French government banned the treatment of COVID-19 patients with hydroxychloroquine. Thus a frontal clash between angry protesters and the republic is inevitable in the coming days and months like the one that took place in the fall of 2018 led by the Yellow Vest protesters. Usually, such violent acts occur in the periphery of the cities, France’s banlieues (suburbs of larger cities) which are the hub of North African and Sahel countries' immigrant working class, not in its bourgeois quarters anymore.

An element of political violence revealed what Macron has been ignoring, thinking he could marginalize the angry movement, gambling on its political ruse. This is likely to reappear severely next fall, following the impact of COVID-19’s socioeconomic consequences on the French vulnerable social class. Yet Macron had languished the political parties during the campaign that led to his election in May 2017.

His “new” world attitude and rhetorical governing style established a vertical system that irritated the conventional union, the political opposition and the people. All went well until the summer of 2018, following the Elysee political scandal, the “Benalla Affaire,” an opportunity that resurrected the opposition from its aches and pains. France of the bottom "white France," the majority represents an important reservoir vote for Le Pen's National Rally (RN) party, which has never forgotten that hot summer episode of French political melodrama.

In sum, the real problem with French politics is the growing tendency among politicians to pursue victory above all else, and treat politics as a form of war, which runs counter to basic democratic values. This persistent attitude has crippled France's ability in light of the COVID-19 crisis and caused a real malaise that is spreading all over French society.

A young president who wanted to end the "old" world of French politics is haunted today by the ghost of a one-term president like his predecessors, Nicolas Sarkozy and François Hollande. French people are waiting for solutions. He needs to reach and revitalize the republic's culture of democracy and equality before the front page headlines of le Figaro and l'Humanite papers in May 2022 feature the two-word title: “Marine President.”