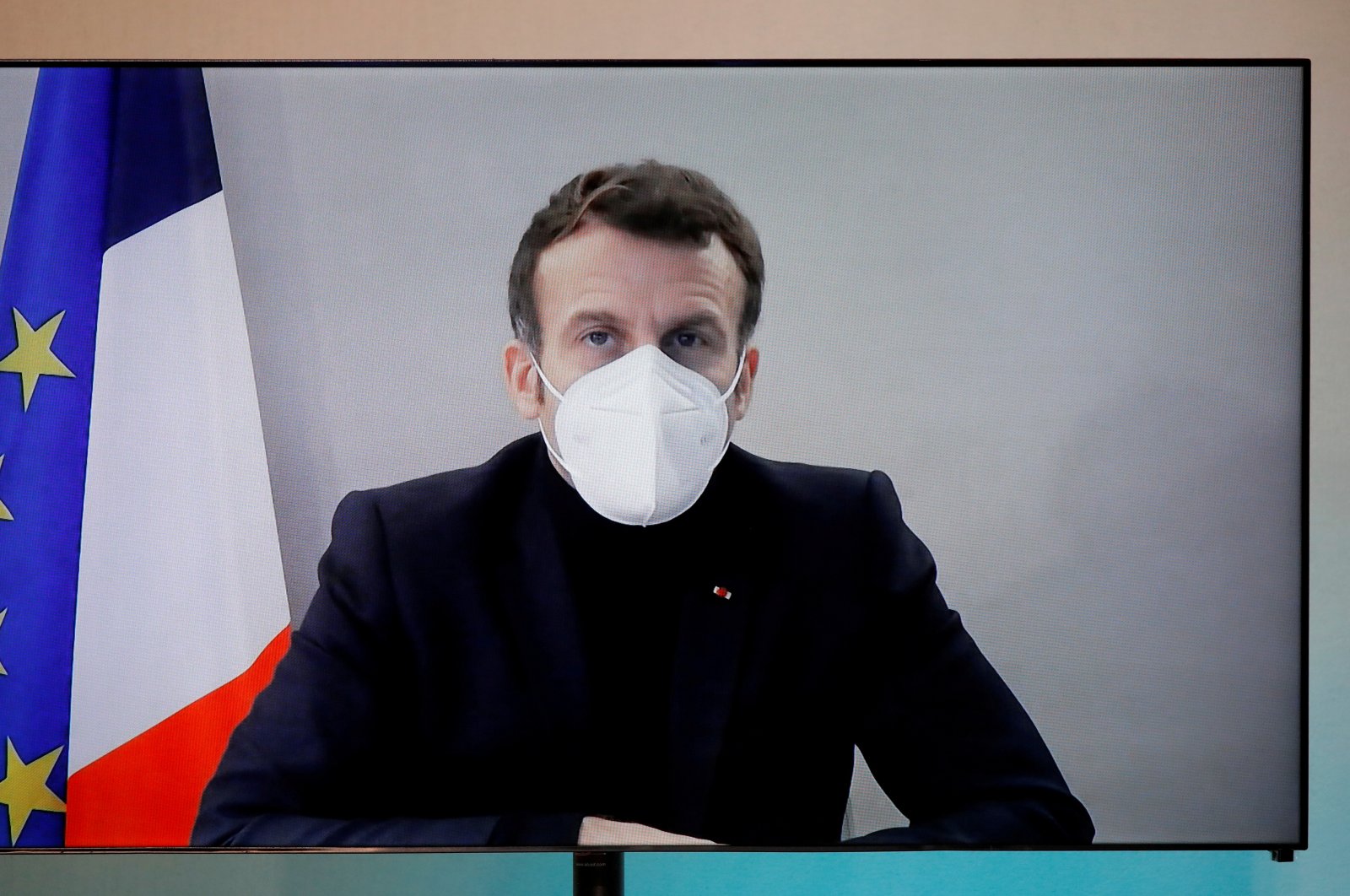 French President Emmanuel Macron on a screen as he attends a conference round table via videoconference in Paris, France, Dec. 17, 2020. (Reuters Photo)
by Abdennour Toumi Dec 29, 2020 12:05 am
RECOMMENDED

When Emmanuel Macron was elected as French president in May 2017, French people compared him to former U.S. President Barack Obama in terms of elegance and eloquence. However, there were some odd remnants of domestic, foreign and defense policy elements that have been criticized as the worst ever in the fifth republic. Those policies, including particularly the Mali and Libya military operations, were linked to former French presidents Nicolas Sarkozy and Francois Hollande.

There are growing problems in socioeconomic reforms and migrant policies. The bad handling of the COVID-19 pandemic has become a nightmare for the Macron administration and the French public.

In 2017, the majority of the French voters chose Macron, hoping for a change and to make the country a better place to live in. Yet Macron's partisan strategy and his narcissism are making his presidency unpopular. His handling of the liberal media and protests that began in 2018 has also been terrible.

Macron’s domestic security policy could be read in the same paranoid vein as that of former U.S. President George W. Bush. Recent political turmoil at the Elysee Palace that increased with controversial bills is yet another crisis for Macron.

Thousands protested against a proposed law to ban police images and increase surveillance. The bill has drawn condemnation from civil rights activists and journalist groups, as well as the European Union and the United Nations. The security bill gives authorities, specifically the police, extra powers. It would ban the publication of pictures of police officers in certain circumstances and allow greater use of surveillance drones.

Among many other elements of the proposed legislation that could limit human rights is Article 22, which authorizes the use of surveillance drones in the name of security and the fight against terrorism. This has serious implications for the right to privacy, the freedom to gather peacefully and for freedom of expression in the country.

Last month, four French police officers were charged with assaulting black music producer Michel Zecler while hurling racial epithets at him. The footage of the incident went viral at a time when many in France feared the proposed security law would be used to cover up future cases of police brutality.

Last October, the murders of a French teacher and of three worshipers in the cathedral in the city of Nice were shocking. The French government attempted to accelerate the bill just like the Bush administration did in the aftermath of the 9/11 terrorist attacks. However, rather than finding a solution to prevent such attacks, he presented a bill that would bring unrelated bans.

In the past weeks, more than 70 mosques were closed and the phone lines of some Muslim community leaders were wiretapped. That raises the question, is Macron is targeting Muslims in the country?

There is public outrage, and liberal media outlets like the online investigative paper Mediapart are calling for French Interior Minister Gerald Darmanin and the Paris police chief to resign. The liberal media believes Darmanin went too far in his actions, just like Bush’s Attorney General Alberto Gonzales spied on Americans and Muslim communities.

Liberal media is fond of the rhetoric that governments track phone calls and violate human rights. However, that’s not the case in France.

What happened to Macron? His honeymoon with the press didn't last too long. Macron also faced a great crisis when one of his top security aides was filmed assaulting protesters on May Day in 2018.

At that moment, Macron’s relationship with the media was really bad. Yet this democratic exercise reflects the healthy political process in France. What did the Macron administration not get from this exercise?

Transparency does not mean that executive power has authority over journalists and minority rights. Macron should know better. But his obsession to get reelected in 2022 has made him forget the French principles of liberty.

Last week, French Prime Minister Jean Castex’s cabinet proposed a bill to deny access to public transportation as well as certain activities to those who are unable to prove that they received a “preventative coronavirus treatment.”

The drafted bill had been harshly denounced by the far-right National Rally (RN) and the left parties. The criticism led to the withdrawal of the drafted bill.

Castex has now presented a bill establishing a health emergency management regime, including an article allowing certain freedoms related to the administration of a vaccine.

In the unprecedented year of multidimensional crises, Macron is at his best using his cache and acts against the freedom of expression for journalists, minorities and more. He has become a "big brother" now.