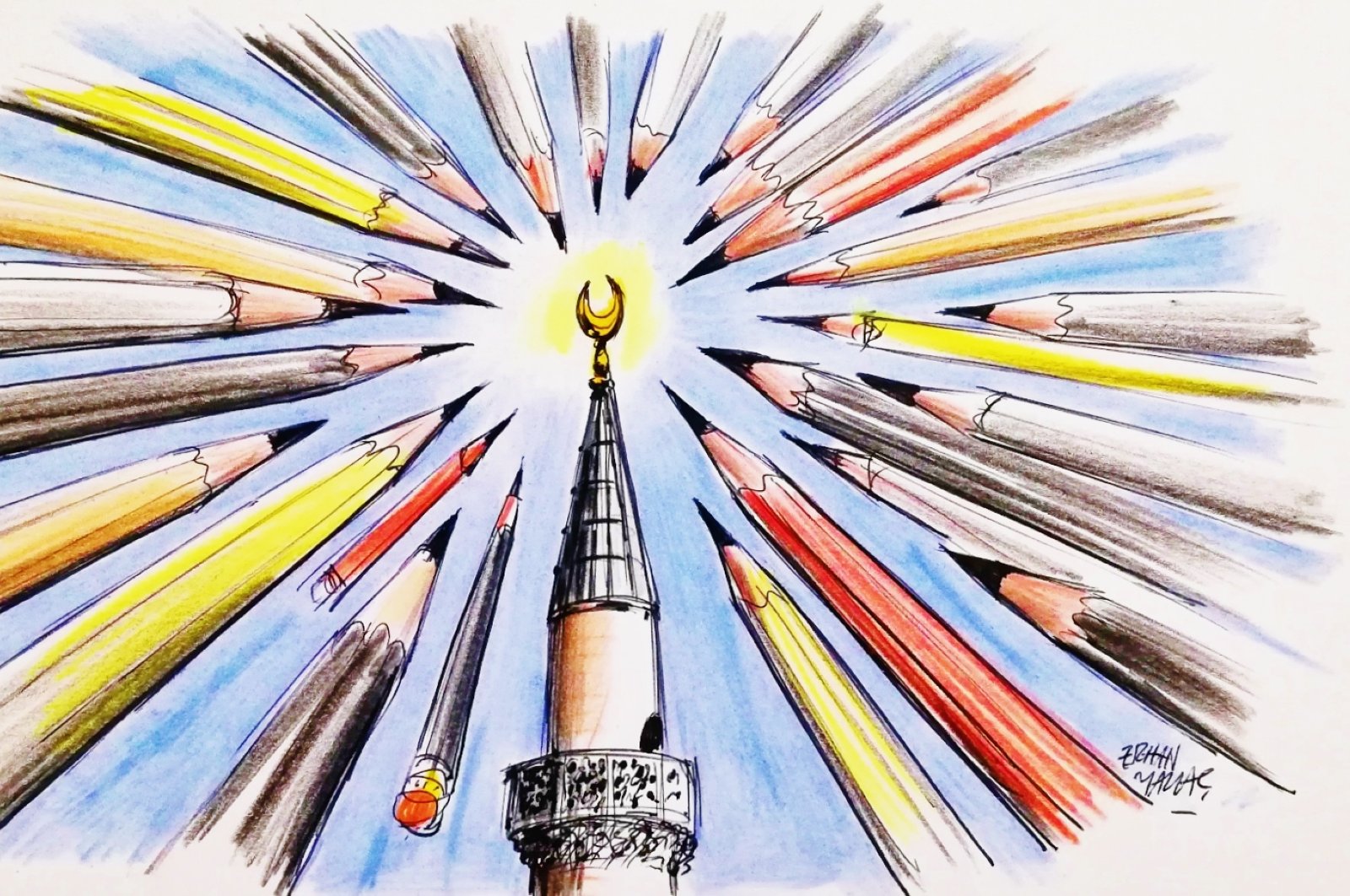 The COVID-19 pandemic has put medical doctors through one of the most grueling tests of all time. They are on the front lines of the battle to save human lives and are putting up a truly brave fight. Yet beyond the battle lines, in the confines of comfort, is another tribe of doctors that are engaged in an unusual fight. These are the communal doctors who are devising new medicine and tools for breeding the propaganda of hate. Leading them on the front lines are some journalists who see this pandemic as incendiary fuel to further the communal agenda. Mainstream media has long been engaged in toxic propaganda against Muslims and this new calamity has led to a more lethal mutation of the communal virus.

During the COVID-19 pandemic, there have been so many instances of groups taking a back seat and letting hate win, including governments and international bodies. It was quite understandable because we are not equipped to foresee the course of the trajectory of their agenda. But the role of some journalists in pinning the blame on a particular community and assigning stereotypes to one group only shows a deliberate bias. The hallmark of a fair media is that it always considers facts sacred.

The damage of this pandemic to health, wealth and well-being has already been enormous. The situation we are in is like a world war, except in this case, we’re all on the same side. Hence, instead of pitting one section of humanity against another we should join forces and make it a united fight.

There are many authors who keep the midnight oil burning to ensure that the light keeps shining on bad Muslims. These stories are produced by a well-oiled Islamophobia machine with financial backers, think tanks and misinformation experts who are constantly manipulating the already flawed image of what Islam is. They are attacking the identity of Muslims, which is so diverse that it cannot possibly fit into one box.

They have not only ratcheted their anti-Muslim rhetoric but also made it more strident. In fact, the entire discourse is being orchestrated on predefined lines. To put it in the words of Jim Morrison, “Whoever controls the media controls the mind.”

In an ideal world, journalism is a profession of incredible integrity, and journalists are among the most dexterous and skilled people in the world. We have all benefited from the work of persistent journalists who put their lives, limbs, family and even sanity on the line in pursuit of truth. There is no sane, decent and democratic polity possible without journalists who challenge power, relentlessly pursue and disseminate the truth, and always find another story to tell.

The press once seemed to have a conscience, thanks to history’s painful social conflicts and questions of war and peace. The world, however, has changed, and many of us may be in the time warp of old values. Like all institutions, the media has also suffered in terms of its reputation.

Mark Twain once said, “Stupid people – who constitute the overwhelming majority of this and all other nations – believe and are convinced by what they get out of a newspaper, and there is where the harm lies.”

Facts must be sacred

The crucial point is credibility. For the media to be credible, it has to take responsibility for getting its facts right. That means digging deep, talking to a range of people to get the different sides of the story and double-checking their facts rigorously. The media should not hesitate to root out and expose lies, hypocrisy and corruption, but has to be sure of its facts before doing so.

There is widespread agreement among Muslims that media reports involving them are selective, biased, stereotypical and inaccurate. If you want to know how many times Muslims have condemned violence and extremism, you can simply Google it with the common phrase “Islamic extremism,” and you will be surprised by the thousands of Muslims, Islamic institutions, scholars, leaders, priests and governments that are condemning and fighting violence, hatred and terrorism while assuring everyone that this does not have anything to do with the peaceful message of Islam. It is only the voices of extremism that are being projected loudly while the saner voices of liberalism and pluralism are totally obscured, giving a very distorted slant to the whole discourse.

In the context of the growing media attention given to Islam and Muslims, there is a critical issue with the role that the media plays in reinforcing certain negative stereotypical images of the community.

There is widespread agreement among Muslims that media reports involving them are selective, biased, stereotypical and inaccurate. The majority of Muslims are moderate, peaceful people who have in fact been more affected by terrorism and violence than non-Muslims. But the media is not interested in this positive news.

It has constructed its own stereotype of a Muslim and uses selective stories to reinforce this stereotype. So what is the purpose of the mainstream media if they are not going to fulfill their mission of informing the public? The answer is easy – it's money.

The collective media is a multibillion-dollar monolith. It is an industry that is managed by industry barons who want to promote their own ideology and feed on firing information at the viewer at a machine-gun pace, and when that happens, a lot of the context is lost.

Many of the people who work in media have no clue how to tell a story properly, and when it is a story about Islamic issues, they are even more clueless. The press follows a familiar narrative everywhere – Muslims are intolerant extremists and their scriptures promote violence.

The distorted images of Islam stem partly from a lack of understanding of Islam by non-Muslims and partly from the failure of Muslims to explain themselves. The results are predictable – hatred feeds on hatred.

The ignorance of Islam exists both among Muslims and non-Muslims. Non-Muslims who are ignorant and misunderstand Islam, fear it. They believe it threatens their most basic values. Fantasy, conjecture and stereotypes replace fact and reality. Similarly, Muslims have their own misconceptions.

Reacting to the hate and fear of non-Muslims, Muslims often create a kind of defensive posture within their societies and a combative environment built on militant rhetoric. In this heat and misunderstanding, the voices of peace and tolerance are drowned out. We need sanity in all quarters to let the truth prevail. The media can play a very critical role in our goal of achieving this objective.

The reality is that religious leaders and dialogue practitioners may not be equipped to properly understand and analyze news sources or reach out meaningfully to the media. They may not be aware of the process of the newsroom agenda setting and may not recognize that journalists do not usually set the news agenda.

Religious leaders and dialogue practitioners could benefit from training on how to represent themselves better to the press and on online platforms. They should not allow their messages of peace and reconciliation, or the fact that they represent the majority of people of faith, to be overshadowed by media's savvy religious voices that operate in conflict and hatred. There is the possibility that in the heat of debate, objectivity gets diluted.

It is necessary that both faith leaders and journalists appreciate and understand each other's constraints. News media relies on sales for survival because their sales figures determine both their subscription and advertising revenues. What sells is hard-hitting news about dramatic, action-packed and emotionally charged events.

As the saying goes: "If it bleeds, it leads." That does not mean that audiences do not react positively to in-depth features and profiles, but traditionally headlines are driven by hard news, including political, military and economic developments. This can make it challenging to find a prominent space for nuance.

There are scholars who devote their entire careers to understanding even a single religious sub-tradition. There are different doctrines, beliefs, modes of dress and practices, institutional structures, leaders, alliances and disputes among individuals or communities that are opaque from the outside.

Different communities within the same religion may have different interpretations of history and doctrine.

For news media, training reporters so they can depict and report knowledgeably on religious communities may seem prohibitively time consuming, expensive or difficult. These are the cold, hard facts of day-to-day media operations.

For their part, Muslim leaders can play a very meaningful role in sensitizing the media to the various complexities of Islamic issues. Broader dialogue can help in a nuanced understanding of the whole issue.

Journalists need to rededicate themselves to the original mission which made journalism a noble calling of so many great men and women. It is their commitment to the values of liberty and freedom that earned the press the status of the Fourth Estate alongside the other three custodians of free speech and democracy.

It is time journalists reaffirmed their commitment to the credo of Joseph Pulitzer III (1913-1993), the founder of the world’s gold standard in journalism, the Pulitzer Prize: "We will illuminate dark places and, with a deep sense of responsibility, interpret these troubled times."

*Holder of Ph.D. in economics based in Napur, author of several books on Islam

Based in Napur, Ph.D., Economics, author of several books on Islam including bestselling biographies of Prophet Muhammad and Caliph Umar
RECOMMENDED