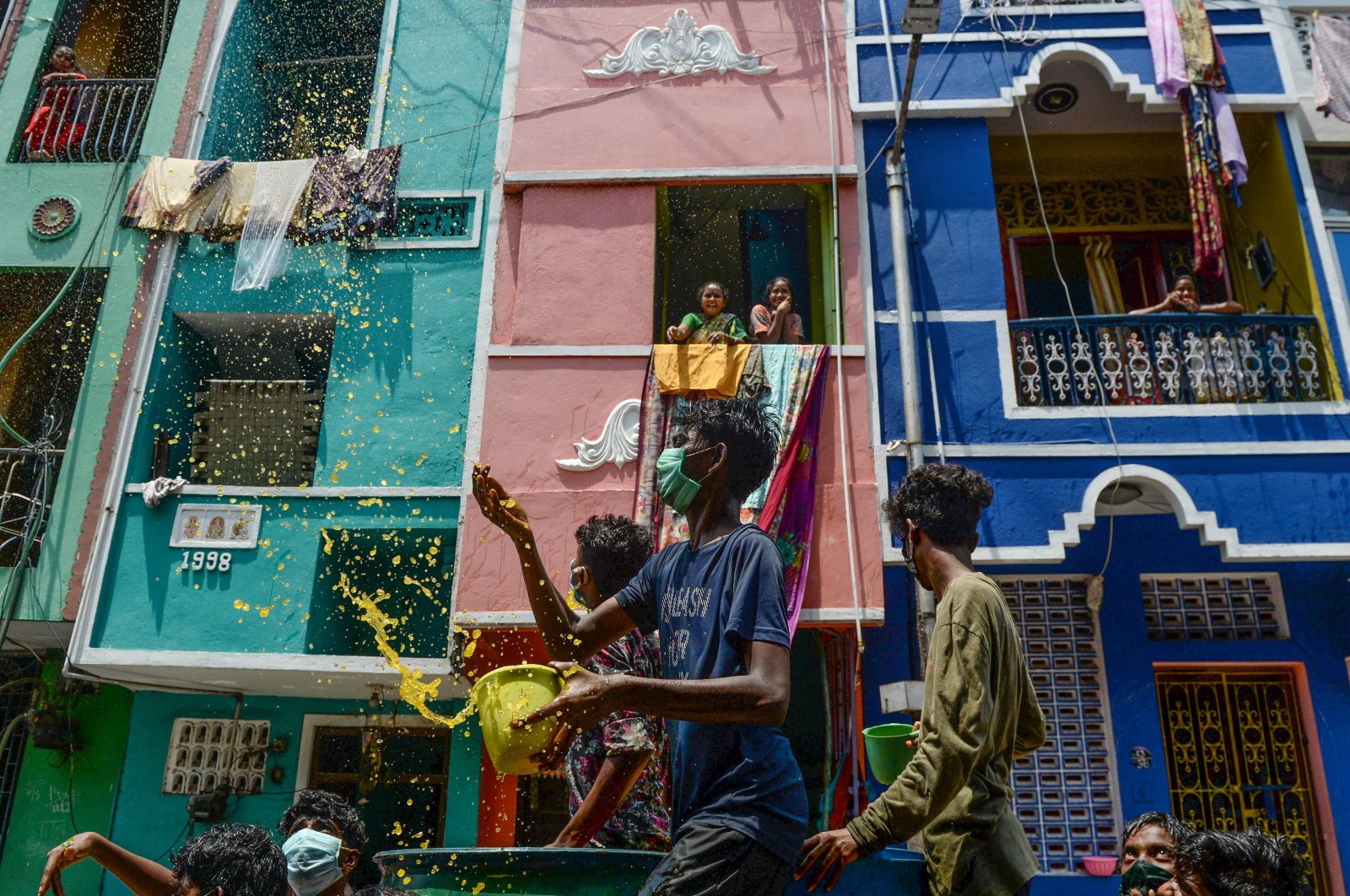 Volunteers throw a mixture of water, neem herb and turmeric – which they tout as a natural disinfectant – on a street in a residential area during a government-imposed nationwide lockdown prompted by the coronavirus pandemic, Chennai, Tuesday, April 7, 2020. (AFP Photo)
by Shakir Husain
Apr 09, 2020 12:05 am

India's lack of capacity in fighting the spread of the coronavirus stands exposed in its substandard quarantine centers and media disinformation campaign against Muslims.

The country is normally eager to present a good image to the outside world, but many Muslim visitors put under coronavirus quarantine in Delhi have been badly treated.

India's Ministry of Home Affairs on April 2 "blacklisted" 960 foreigners for doing tabligh work (sharing Islamic knowledge and values with people and inviting them to this beauty) or propagation of Islam, while being in the country on visit visas. They included Indonesians, Malaysians, people from Kyrgyzstan, Bangladeshis, Algerians, Afghans and some from Western countries.

A total of 2,361 Indians and foreigners were evacuated from the religious group Tablighi Jamaat headquarters, popularly known as Markaz, in Delhi's Nizamuddin area when the place was closed on the morning of April 1 amid a nationwide lockdown to combat the coronavirus.

Most people were sent to quarantine centers, and 617 were taken to hospitals.

There are daily hundreds of people at Markaz, attending sermons and prayers to improve their religious knowledge or seeking spiritual experiences by going to far-flung areas of India for religious propagation.

When Indian Prime Minister Narendra Modi made his surprise announcement that the country will go under a three-week lockdown within hours starting March 25, people were told to stay where they were.

No movement of anyone other than those involved in essential services like running utilities, hospitals or food supply chains was allowed.

Those stranded in Markaz sought police and the Delhi administration's help to be sent to their homes and hotels but could not get passes for transportation, according to a Markaz press release on March 31 after they came under a barrage of media criticism for the gathering amid concerns over the coronavirus.

There was a large-scale event on March 13-15 in which people from India and abroad participated and some of the attendees remained in Delhi.

Several coronavirus positive cases have been found among those attending the Tabligh events, but a sustained media campaign to target the group ignores the fact that the country has hardly tested people in sufficient numbers to gauge the prevalence of infections.

Critics say the media coverage against Tabligh has become a convenient cover to hide India's lack of capacity and preparedness for tackling the crisis. It became a serious global problem by March 22, the day India tried to impose a curfew to determine how wider restrictions on people's movements might work.

News agency Press Trust of India reported on March 13 that government officials in the country did not consider the coronavirus a health emergency. So the progress toward a national shutdown of 21 days was quick and 1.3 billion people were ordered to stay indoors.

It was not surprising that the members of the Tabligh group carried on with their activities along with other places of worship, including Hindu temples which kept attracting crowds of devotees in the days preceding the lockdown.

A Hindu group in mid-March even organized a cow urine drinking party to promote animal piss as a cure for the coronavirus.

The Indian government took gradual measures to tackle the pandemic. First, there were coronavirus screenings at airports, then came restrictions on flights for some international routes and later most transport services were halted.

The curfew meant to enforce social distancing saw processions and marches in which people shouted ludicrous slogans to curse the coronavirus.

This careless approach was reflected in the inadequate focus on building quality quarantine centers, stocking medical equipment in hospitals, securing test kits and ensuring a smooth supply logistics for essential goods during the lockdown.

Some of India's shortcomings were laid bare in the experiences that the foreigners had during the shutdown.

A group of Malaysians held in a makeshift quarantine facility in New Delhi said they had to sleep on the floor and were given inedible food.

"This is our room in a school. We sleep on the floor. We are with preachers from the Philippines, Indonesia and Africa," a Malaysian says in a video recorded from a mobile phone.

Thin cotton mattresses can be seen lying on the floor along with piles of old furniture stored in the corridors.

Another video showed a sooty floor and the walls stained with what appeared to be paan (a mixture of areca nut and betel leaf) spit.

"The government doesn't have enough resources to build good quarantine facilities. Schools are closed these days so they can be used for putting people in isolation. They just send people to these buildings and give them basic food," Zafarul Islam Khan, editor of Milli Gazette community newspaper said.

Indian media, which hardly misses an opportunity to indulge in anti-Muslim rhetoric, is milking the Tabligh controversy by presenting a narrative that blames Muslims for the coronavirus in India.

"Tabligh people were not sensitive to the coronavirus situation. There are examples of other (religious) groups being worse offenders, but it's easy to make Muslims scapegoats. Now the government and media are using them to defame Muslims and Islam. The ruling party's Hindutva agenda clearly targets Muslims," Khan said.

Media incitement has already led to Muslims being harassed and attacked in many parts of India.

The anti-Tabligh campaign targets both Indian and foreign Muslim groups, exposing Indian society’s appetite for conflicts even in the midst of a pandemic.

The Indian news headlines that followed when nine Malaysians were barred from traveling on an evacuation flight to Kuala Lumpur on April 5 by Delhi airport authorities present them as some kind of criminals. They may have visited the Nizamuddin area – where the headquarters of Tablighi Jamaat are located – but were not among those evacuated from the Markaz building by police. The Malaysians were staying in different places and wanted to leave India when an evacuation flight was made available by the Malaysian government for stranded Malaysians.

They were brought back from the airport by police in two ambulances as the Indian Home Ministry had "blacklisted" them for participating in the prayer and preaching events of Tablighi Jamaat.

They were taken to a hospital in the morning, kept in the ambulances for many hours and given food after almost 10 hours, people who know the Malaysians said.

One of them was beaten and suffered a gash on his wrist, according to a photograph shared by the man's friend.

According to a witness, authorities also confiscated mobile phones of some of the people held in another quarantine center.

The Malaysians who were able to talk to their friends and relatives said they were kept in conditions that resemble a prison.

Foreigners have been coming to India for years to do tabligh work with full knowledge of local authorities. The organization's headquarters is located near a police station and intelligence and law enforcement agencies have close contacts with the top functionaries of Markaz.

Suddenly, their Islamic identity and the coverage of the coronavirus have turned the Tablighi Jamaat and those associated with it into objects of media vitriol in India.