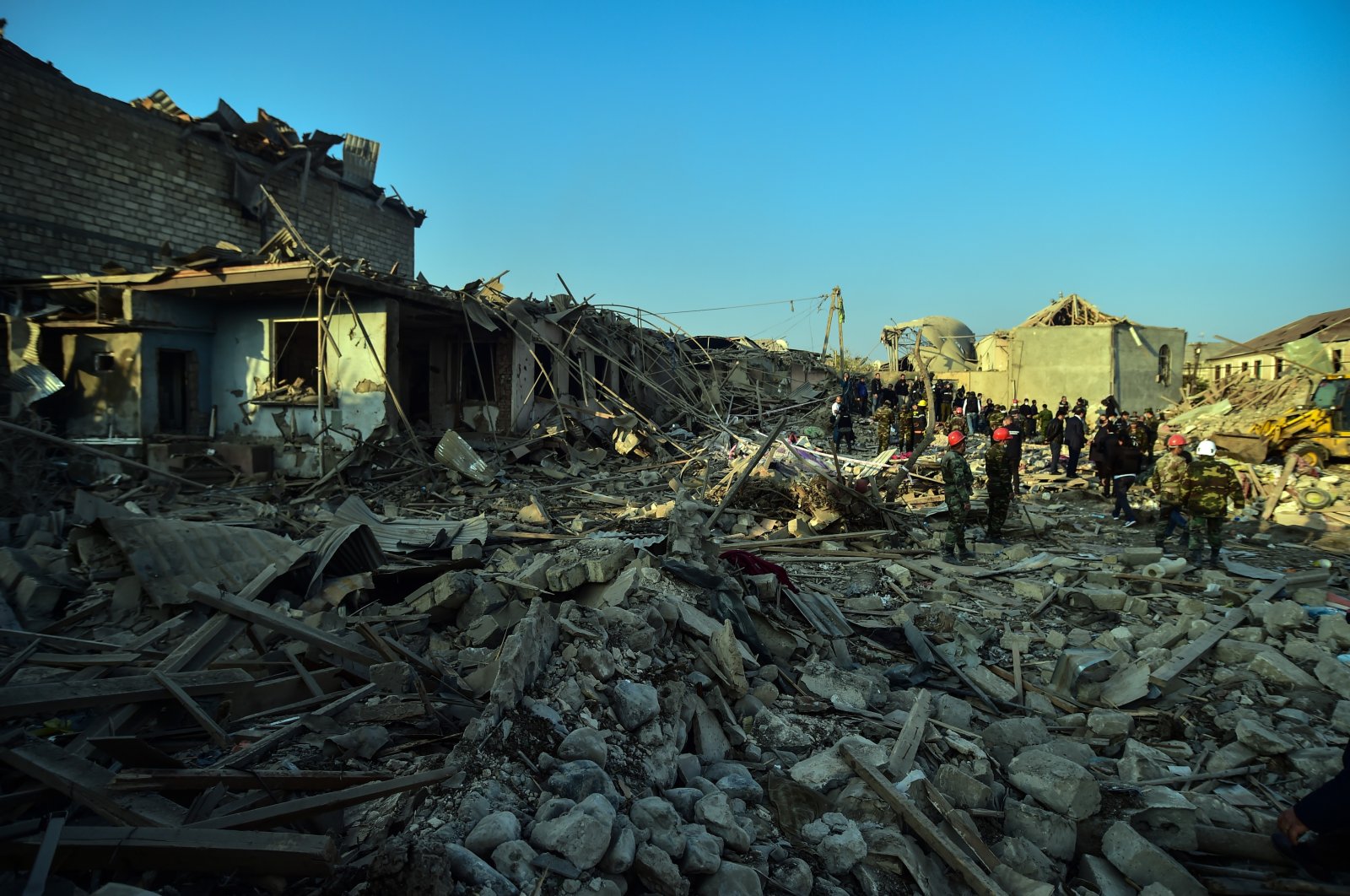 Rescue workers inspect the area destroyed by Armenian shelling against civilians in the Azerbaijani city of Ganja, Oct. 17, 2020. (İHA Photo)
by Bayram Aliyev
Oct 20, 2020 12:05 am

The Nagorno-Karabakh conflict, a deep-rooted crisis in the South Caucasus following the collapse of the Soviet Union, continues to be a threat to international security. Although every international organization recognizes Nagorno-Karabakh as part of Azerbaijan and every major power in the region respects the territorial integrity of Azerbaijan, the conflict has remained unresolved.

The formal peace talks under the mediation of the Minsk Group – which was set up in 1992 by the Organization for Security and Co-operation in Europe (OSCE) – have been continuing for about 27 years without any tangible results. Recently, the clashes between the parties have entered an active phase.

Yerevan's aggressive rhetoric and policies in the occupied lands such as illegal settlements and its aim to change the capital of the so-called Nagorno-Karabakh Republic to Shusha deepened Baku's disappointment about the solution to the conflict. The frustration about a peaceful solution has changed the perception both for Azerbaijani policymakers and society, and the Armenian aggression has been responded to adequately and resulted in harsh clashes on the front line.

Undoubtedly, one of the most powerful actors in the region is Russia, and its stance is intriguing. Looking at the statements by Russian officials and their moves, it is clear that Moscow tries to preserve its neutrality on the recent clashes. There are various reasons for it.

On the one hand, Russia has always tried to keep the status quo in the region in line with its national interests. The status quo favors neither a permanent peace nor a large-scale war. By doing so, Russia continues to be an influential actor not only in Armenia, but it also has control mechanisms in Azerbaijan.

However, it is apparent that Russia chooses not to explicitly interfere in the recent clashes and does not make any effort to cease the ongoing clashes between Armenian separatists and Azerbaijani Armed Forces. However, Russia's motivation for maintaining a neutral stance is not limited to one factor; there are a number of reasons behind it.

Firstly, the new anti-Russian government that has come to power in Armenia after the revolution is perceived as a threat to Russian national interests in the country. Armenian Prime Minister Nikol Pashinian's populist stance and his statements in the occupied regions irritated not only Azerbaijani people and government but the Kremlin as well. Pashinian's steps to violate the status quo, challenging Azerbaijan and denouncing Russians and Russian-backed former officials, are being observed with concern in Moscow.

Additionally, the Pashinian government pursued a policy to fire pro-Russian bureaucrats from the state bodies and replace them with Western-educated ones. The new circumstances in Armenia reduced the Russian role in the decision-making process and in society. Thus, the first reason behind Russia's desire to refrain from direct involvement in the clashes is to teach the Armenian government a lesson.

The recent statements by Kremlin officials, especially by Russian President Vladimir Putin and Foreign Minister Sergey Lavrov, aimed to build closer ties to Azerbaijan, as it is obvious that Russia's stance toward the 1990s war caused Azerbaijani society to choose a completely different path.

Russia intends to maintain neutral rhetoric in order to remain on good terms with the Azerbaijani diaspora in Russia and to ensure a positive image of the country in Baku.

Furthermore, Ankara's direct support to Baku is also another reason behind Russia's careful stance, as it does not want to harm the highly strategic Turkey-Russia economic bilateral relations. In addition to this, as it is understood from Lavrov's statements, Kremlin does not have any objection to the liberation of Azerbaijani five regions under the Armenian occupation.

However, they are eager to place Russian peacemakers around the Nagorno-Karabakh region which would enable them to have direct control on both sides, but this idea has been rejected by Baku.

As Azerbaijani President Ilham Aliyev repeatedly stated, Baku wants Turkey to be at the negotiation table as a balancing power. It is totally relevant, considering Turkey’s geopolitical position as it has borders with the South Caucasus and conflicting sides. It seems that Turkey’s presence on the field played a significant role in Moscow's neutral stance.

The Kremlin has long been seeking multilateral world order by promoting regional powers and creating barriers to entry for powers outside of the region. In this context, the Moscow-Ankara-Tehran presence is preferred by the Kremlin, instead of Western powers. The Eurasian worldview and escape from trans-Atlantic powers are reflected in the Russian strategic documents and forms the basis of Russia's strategic thinking.

Although Russia, as a co-chairman of Minsk Group responsible for mediating a solution to the conflict, called the sides to implement a cease-fire and invited them to formally return to the negotiation table, the move has not been powerful enough to prompt the sides to engage in further talks. Even some provocative claims by Armenian sources about Syrian fighters against Armenians do not cause Russians to become more involved in the conflict.

It seems that the Kremlin is reluctant to take part in the recent clashes, at least for now. As the clashes are in internationally recognized Azerbaijani lands, and Baku has the right to liberate its lands by any means within the legal framework, Russia does not have a responsibility to protect the separatist forces as a Collective Security Treaty Organization (CSTO) member and an ally of Armenia. This position has been expressed by Russian officials, clearly.

In conclusion, being one of the most influential actors in the South Caucasus region and a historical ally of Armenia, Russia is not willing to be perceived as a part of the conflict. The Kremlin might get involved in the conflict if there is a serious threat to the security of the Armenian Republic but not when it comes to Karabakh.