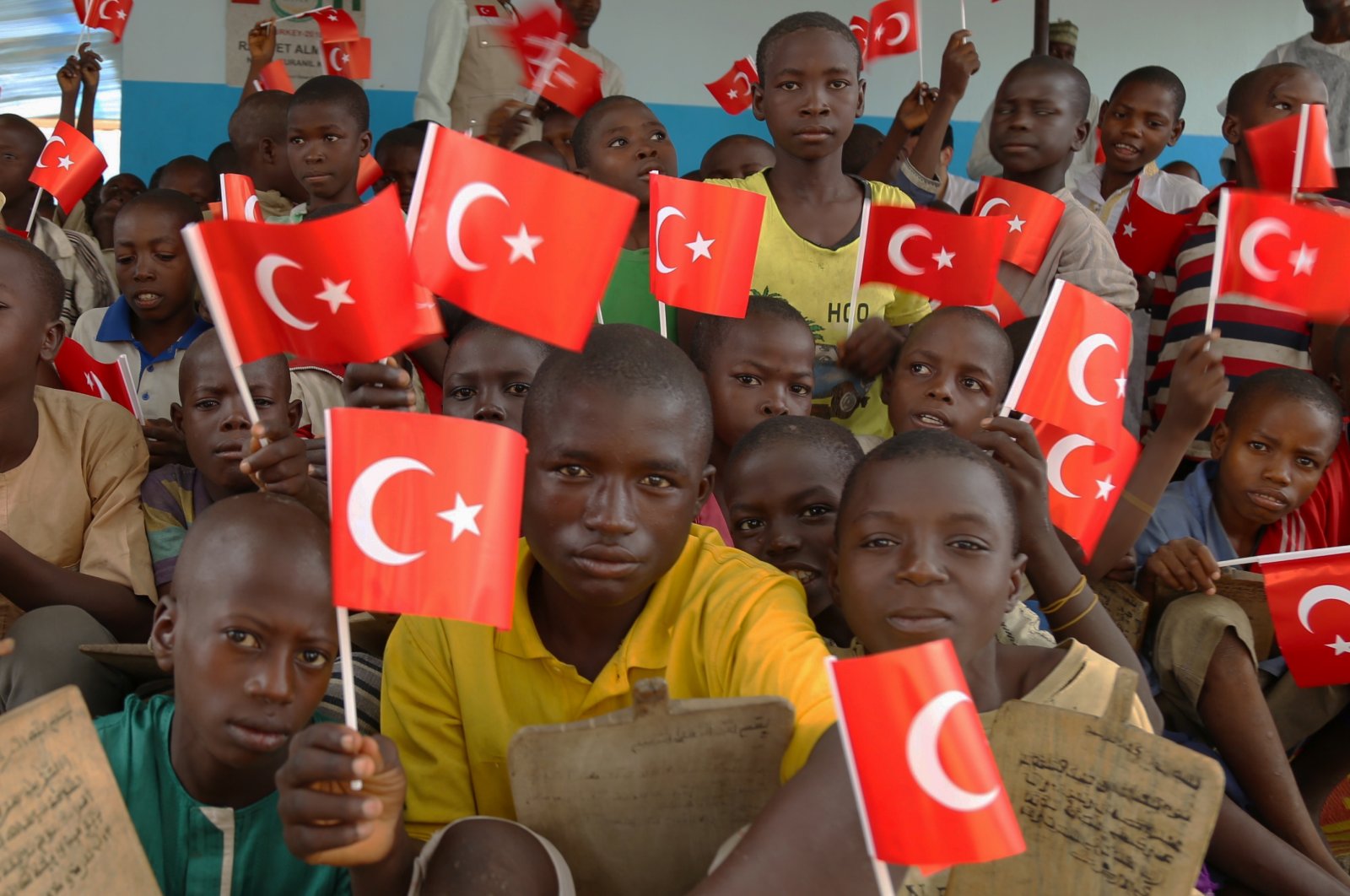 Students hold Turkish flags in a dormitory restored by donations provided by Turkish charities and businesspeople, in the capital Abuja, Nigeria, Oct. 4, 2019. (AA Photo)
by Muhammet Ali Güler
Oct 24, 2020 12:05 am

The concept of neo-Ottomanism has been explained by various scholars and experts around the world and whether it is based on cultural, economic or political reasons has also been discussed. Some argue it is directly linked to military expansionism, while others describe it as a natural approach that involves the increase of mutual benefits.

In the neo-Ottomanism debates, Turkey has been called an “aggressive authoritarian,” “anti-Western” and even “Pan-Islamist.” Such claims, however, intend to isolate the country and damage its ties with the Western world, particularly with the European Union.

Neo-Ottomanism is used as an excuse to vilify Turkey’s constructive policies and tarnish its efforts in the world, particularly in the African continent.

Turkey has been improving its bilateral relations with many African countries for a while based on reciprocal benefits. These relations have gained great momentum thanks to Ankara’s foreign policy strategy.

From security to education, trade to investment, Turkey-Africa cooperation is significantly progressing. One of the reasons for such momentum is the two sides’ wish to cut dependence on Western hegemonic powers.

In this context, there are currently a total of 42 Turkish embassies across the African continent. This number was only 12 just 18 years ago and Foreign Minister Mevlüt Çavuşoğlu stated that it will increase to 50 in the near future.

In addition, Turkey’s scholarships to African students to study in the country have played a major role. Just recently, Abdulkadir Muhammad Nur, a Turkish university graduate, was appointed as a justice minister in the Somalia government’s new Cabinet. A holder of a bachelor’s degree in international relations from one of the nation's leading schools, Ankara University, Nur earlier worked as a diplomat at Somalia’s Embassy in Turkey.

The growing relations, however, prompted the neo-Ottomanism accusations against Turkey. While some of the arguments in the accusations may have been true for the Ottoman Empire, neither the Ottomans nor the Turkish republic ever followed the footsteps of the colonialists.

Today, the countries that were once under the rule of the Ottomans have still found ways to have close ties with Turkey, but these nations are in a dire stalemate due to the current international status quo.

It is not odd to see countries improving relations with each other in order to maintain their sovereignty and freedom. Recent examples of Turkey's growing relationships with African nations include its ties with Somalia, Sudan and Libya.

For example, Turkey's role in Libya is as prominent as the Ottomans' was 500 years ago. Following their request for help, the Ottomans directly supported the Libyans in the 1510s against colonialist powers and Ankara’s brotherly approach toward Tripoli has been repeating itself into the 21st century.

Turkey has not rejected formal requests by the United Nations-recognized Libyan Government of National Accord (GNA) for security and military assistance against putschist Gen. Khalifa Haftar's forces backed by Saudi Arabia, the United Arab Emirates (UAE), Egypt and France.

It is explicit that the role played by Turkey in Africa is vital for accelerating the region's economic development, as well as protecting the civil and democratic government of Libya.

Turkey’s primary reason for engaging more with other regions and countries is the Western powers’ unfair and hypocritical stance towards Ankara. It is also important to appreciate the sincere welcome African nations offer Turkey.

In this respect, the main factor in consolidating relations between Turkey and Africa is the hegemonic and colonial attitudes of some Western powers toward the continent.

I personally appreciate the current Turkish foreign initiatives that build or strengthen ties with those brotherly nations that were once part of the Ottoman Empire. It could be said that Turkey’s transformation from an obedient and weak country in the periphery of the Western nations to an exploring, helping and maneuvering power has disturbed many.

There are thousands of Turkish initiatives across Africa formed through governmental and nongovernmental organizations. The Turkish Cooperation and Coordination Agency (TIKA), the Yunus Emre Institute (YEE), the Diyanet Foundation and the Maarif Foundation are just a few of them. These groups help to grow and cultivate cultural and economic relations between the Turkish and African peoples.

Recently, French President Emmanuel Macron made some remarks regarding Lebanon that were described as ones of solidarity, while the Turkish presence in Africa has been labeled as imperialistic. This illogical definition has been promoted by Westerners and like-minded groups who believe that the West is a beacon of the free world.

It is a fact that Western powers have made remarkable contributions recently to technology, science, literature and many industrial fields.

Turkey has been struggling in its attempts to reconnect with forgotten allies in Africa while, at the same time, trying to conceptualize the world in its own way. Those who refer to Ankara's presence on the continent as an imperialistic endeavor forget the will and power of the local people.

Any post on social platforms by African citizens would go viral and people have learned to resist and not to bend to colonialists anymore. The world today is not the one that was once exploited by the Westerner powers. Countries such as Algeria, India, China, Turkey and many others are stronger than before, and nations today are more united than ever before.

We as writers and experts should be able to re-conceptualize and redefine those negative perceptions, and this can be done through a detailed explanation of neo-Ottomanism or Pan-Islamism.