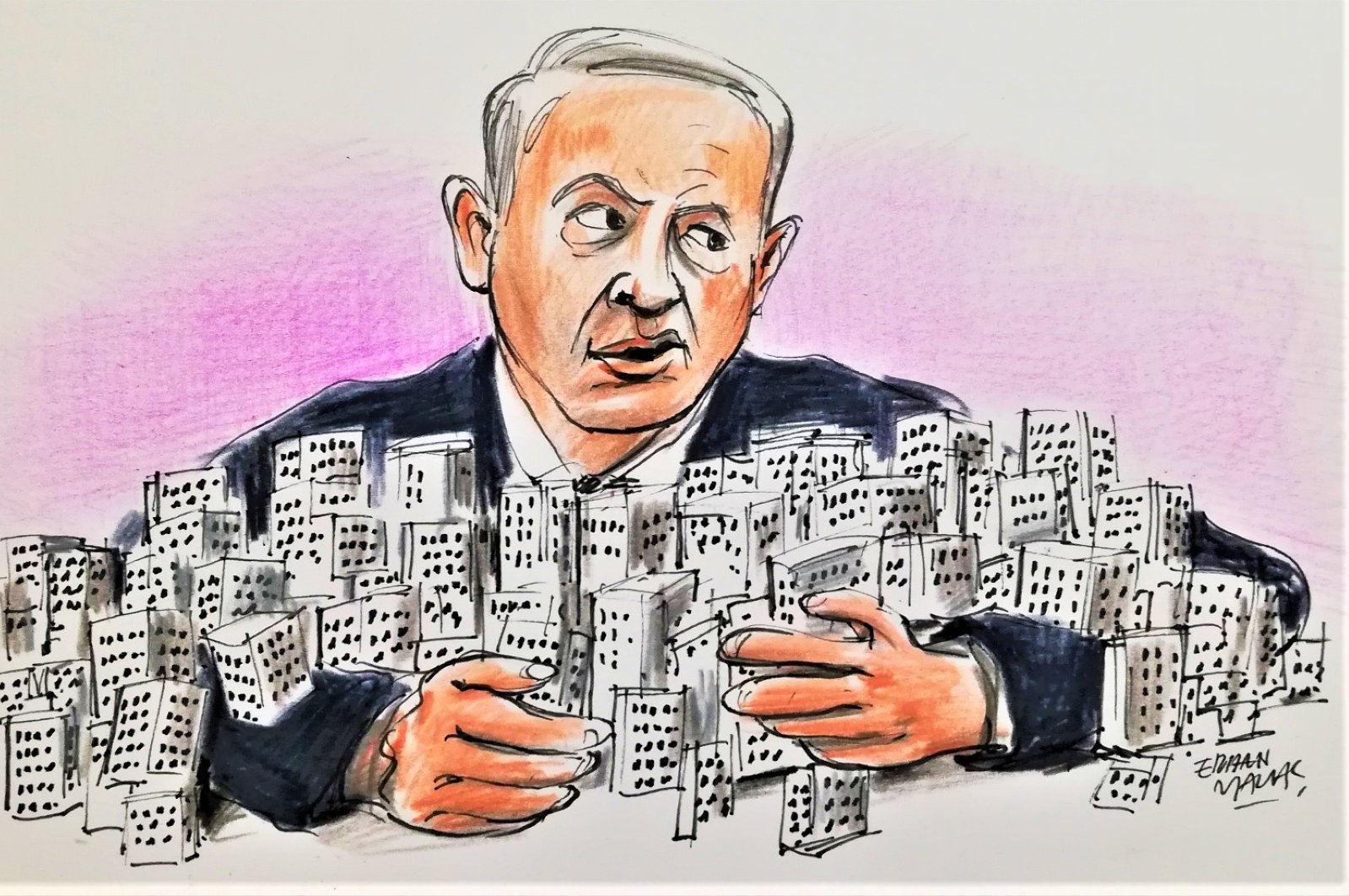 Since declaring Israel an independent state in May 1948, having gone on to occupy east Jerusalem, the West Bank, Gaza Strip and the Golan Heights in June 1967, applying sovereignty over the latter in December 1981, and now preparing to annex around a third of the West Bank, Israel’s leaders think that they are “making history" and that their latest move will mark one of the most important and courageous steps that the country has ever taken.

By forcing facts on the ground and manipulating the geographic and demographic balance of Palestine's occupied territory, Israel is not "making history" by any stretch. It is simply destroying any possibility of fruitful negotiations reaching a fair peace agreement based on a two-state solution, with Jerusalem as the capital of both states.

For years, Israel has sought international support and recognition for its claim over the occupied territories, as such recognition would empower Israel’s decisions, strengthen its international status and – most importantly – change the reality on the ground.

Israeli Prime Minister Benjamin Netanyahu has vowed recently to annex large areas of the occupied West Bank, which includes major settlement blocs, as well as the strategic and fertile Jordan Valley – the region's breadbasket that lies on the border with Jordan – to make them a legal part of the state of Israel, as mapped out in Trump's so-called peace plan.

As a part of this step, Netanyahu is counting on the Trump administration’s backing, since most of the world views existing Jewish settlements on the occupied West Bank as illegal and would treat any unilateral annexation as a flagrant violation of international law.

In the past weeks, the U.S. administration has sent mixed signals, initially greenlighting annexation, then putting the brakes on. Now, apparently, it has reconsidered the move following a closed meeting at the White House.

Democratic presidential candidate Joe Biden has expressed his opposition to such a policy. In a webinar in late May, he said that he did not support annexation, adding that if he won, he would “reverse the Trump administration's steps, which I think significantly undercut the prospects of peace.”

In fact, almost the entire Democratic Party has expressed its discontent over the annexation. A letter, signed by 60% of Democratic senators, was sent last month stating that “a deep commitment to Israel’s security and a shared set of democratic values are foundational elements of the close relationship between our countries ... We are therefore concerned that unilateral annexation puts both Israel’s security and democracy at risk.”

Furthermore, there has been strong opposition from the international community – especially in Europe and across the Arab world.

Netanyahu has faced increasing international pressure to call off the annexation, including calls from the European Union, the Arab League and Norway, which helped broker the 1993 and 1995 Oslo Accords. The king of Jordan, which Israel has a peace agreement with, has warned Israel of a "massive conflict" if it proceeds.

More than 26 years have passed since the Oslo Accords were signed. Despite all their shortcomings and ambiguities, the accords constituted a historic breakthrough in Israel and Palestine's century-old conflict.

In 2000, the Oslo peace process broke down following the failure of the Camp David summit and the outbreak of the Second Intifada. Although Israelis claim that the Palestinians made a strategic choice to return to violence and that consequently there was no Palestinian partner for peace, it was clear that Palestinian violence was a contributing factor but not the main cause.

The fundamental reason for this failure was that Israel reneged on its side of the deal.

In 1996, the right-wing Likud Party returned to power under the leadership of Benjamin Netanyahu, who made no effort to conceal his deep antagonism toward Oslo, denouncing it as incompatible with Israel's right to security and the historic right of the Jewish people to the whole land of Israel.

Since Netanyahu came to power as a prime minister in March 2009, he has offered no viable alternatives to the status quo in the occupied Palestinian territory, nor has he ever addressed the Palestinians as equal partners in the peace process.

He has spent his first three years in a largely successful attempt to arrest, undermine, and subvert the accords concluded by his Labor predecessors and which provided for him a cover to continue to pursue with impunity his illegal and aggressive colonial project in the West Bank.

Netanyahu failed to make concessions in return for true peace with the Palestinians, while at the same time stalling peace talks and blaming the internal conflicts between Fatah and Hamas for precluding Palestine from being considered a credible peace partner. Moreover, he has claimed that the Palestinian National Authority was nearing collapse, and no longer able to carry out its internal and external obligations toward the peace process.

Furthermore, a so-called security barrier, or apartheid wall, was built, 85% of which runs inside the West Bank, encroaching on Palestinian lands.

Particularly destructive to the peace project was the policy of expanding Israeli settlements on occupied Palestinian territory. These settlements are illegal under international law and constitute a huge obstacle to peace. As a result of settlement expansion, the area available for a Palestinian state has been steadily shrinking to the point where a two-state solution has become barely conceivable.

Land-grabbing and settlement construction in the West Bank and Israeli-annexed east Jerusalem have expanded dramatically. At the end of 1993, there were 115,700 Israeli settlers in the occupied territories, while today that figure stands at around 650,000 in east Jerusalem and the West Bank.

U.S. Secretary of State John Kerry made great efforts to get the Netanyahu government to accept a settlement freeze as a precondition for renewing the peace talks, but all his attempts failed.

As Netanyahu remained in power, it was a safe bet that no breakthrough would be achieved in any new round of talks. He was the double-faced prime minister who pretended to negotiate while continuing to swallow more Palestinian lands, hindering any positive step forward.

The former chief of Israel’s intelligence agency Mossad, Shabtai Shavit, has said that Israel does not want peace and that, if it had, it would have made peace with the Palestinian Authority (PA) long ago.

Shavit also added that Netanyahu does not see the PA as a negotiating partner and therefore refuses to develop relations with the authority. “Do you know any other head of an Israeli government who did not talk with the Palestinians?” he asked.

“We (Israel) are the strongest in the Middle East," Shavit continued, adding that no Arab coalition was likely to be formed that would endanger Israel’s existence like it would have in the 1960s and 1970s.

“The strong can do for itself what the weak cannot do ... We can run over the other side if we want,” he added.

It has long been clear that Netanyahu will do almost anything to keep his job as Israel’s prime minister. Netanyahu’s vicious brand of hard-right identity politics has become a familiar blister on the face of Israel's democracy.

To maintain his grip on power, Netanyahu has increasingly adopted the policies and prejudices of the extreme nationalist and religious right. His personal pact with Trump has wrecked peace prospects for Palestinians, and under his aggressive direction, Israel resembles a monstrous regional power.

Assaf Sharon, a professor at Tel Aviv University, argued that the principal reason Netanyahu had become Israel’s longest-serving prime minister was the lack of a persuasive center-left alternative in the years following the 1995 assassination of Labor’s Yitzhak Rabin.

“Israeli liberals are cowed by the right’s political thuggery, demoralized by decades of failure and weakened by mediocre leadership. Afraid to articulate their values and terrified of challenging Netanyahu’s nationalism, many on the left have reverted to meaningless centrism, assuming that the only way to defeat him is by offering a more civilized, non-corrupt version of his politics,” Sharon wrote.

If Israel seriously wants Peace, all that it should do is to withdraw its military from the occupied territories of the West Bank and east Jerusalem and end its life-threatening embargo and imprisonment of the Gaza Strip.

Instead, Netanyahu is rejecting peace in practice while offering empty words of peace in speeches and implementing de-facto obstacles on the ground.