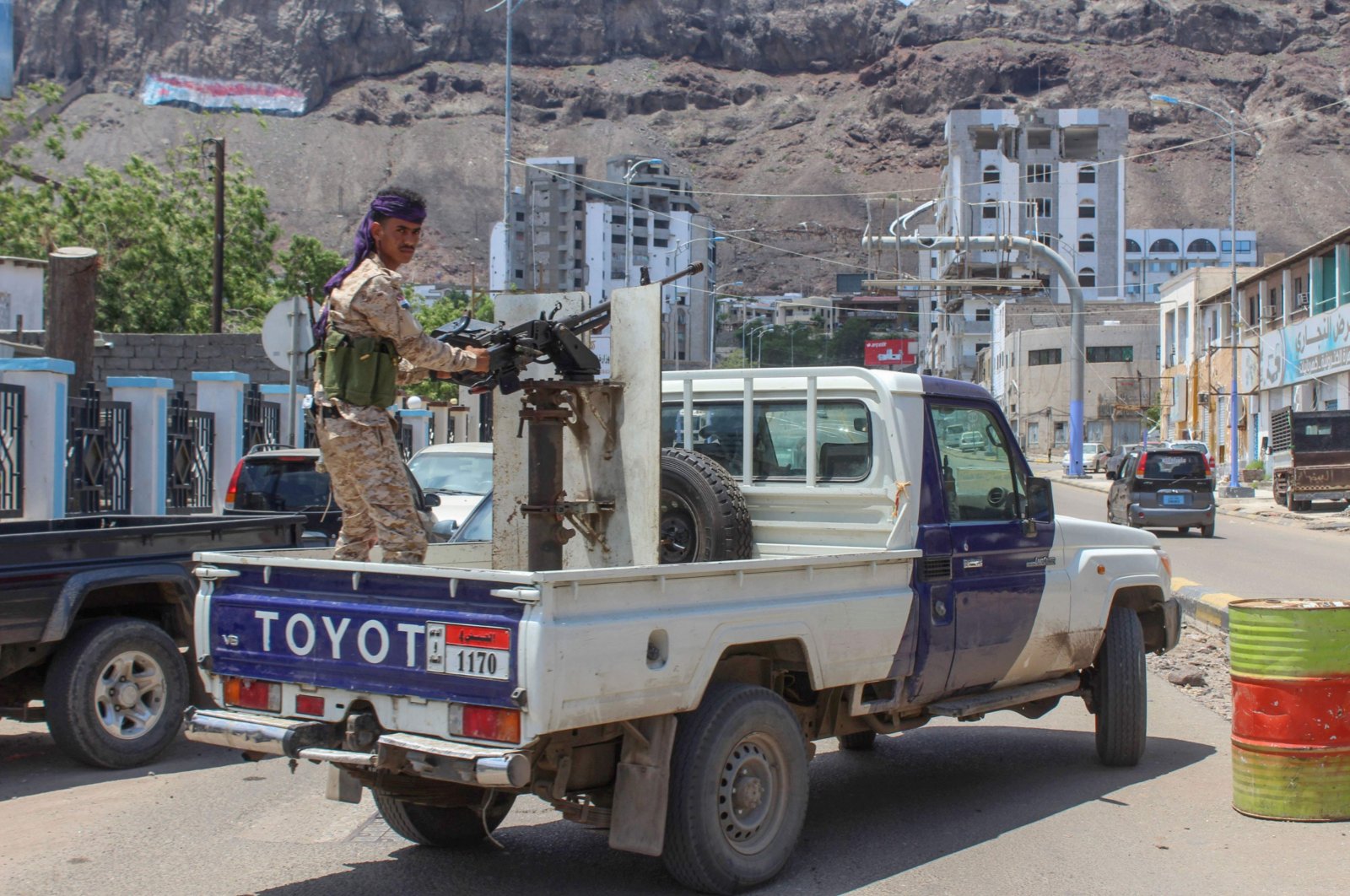 A fighter with the Southern Transitional Council (STC) mans a gun in the back of a vehicle after the council declared self-rule in the south, Aden, Yemen, April 26, 2020. (AFP Photo)
by Mohammed Alragawi May 02, 2020 12:05 am
RECOMMENDED

As a new twist in the war in Yemen, the United Arab Emirates-backed Southern Transitional Council (STC) has declared self-administration and a state of emergency in Aden and southern governorates as hundreds of people protested in several districts of Aden following heavy floods that caused the death of at least 21 civilians.
In his statement, Aidarous Al-Zubaidi, president of the STC, accused the Yemeni government of not performing its duties and blamed the Saudi-led coalition of "unjustified silence" for these actions.
On the other hand, the Ministry of Foreign Affairs, on its official Twitter account, quoted its minister, Muhammad Al-Hadrami, saying that: “The announcement of the so-called STC its self-administration of the south is nothing but a continuation of its armed rebellion ... and a declaration of its rejection and complete withdrawal from the Riyadh Agreement. The so-called Transitional Council alone bears the serious and catastrophic consequences of such a declaration.”
And in an earlier statement, the Yemeni government blamed the STC and its armed forces for blocking its return to Aden, saying that, “As the government issues this clarification to local and international public opinion, it holds the STC responsible for this reckless behavior and its consequences that affect Aden and the Yemeni people in general.”
STC’s huge mistake
A quick look at the local and international reactions to this self-rule decision will show that the STC has made a big mistake as it miscalculated its potential local and international support. For example, in a few hours after the STC’s unexpected decision, authorities in Yemen’s southern provinces of Hadramawt, Abyan, Shabwa, Al-Mahra and Socotra rejected the separatist group’s claim to self-rule as they issued different condemning statements.
Likewise, as the new escalation in Aden marks a clear sign of Saudi Arabia’s failure to implement the Riyadh Agreement that was signed on Nov. 5, 2019, between the Yemeni government and the separatist STC, Saudi Arabia, the leader of the Arab coalition intervening in Yemen, urged the STC to abide by an agreement to end a previous standoff with the Saudi-backed government stating in a statement issued last Tuesday that, "Any step that is contrary to the Riyadh Agreement should be canceled."
The United Arab Emirates, the main supporter of the STC, again preferred to “play it safe” with Saudi Arabia and rejected the STC’s self-rule decision as its minister of state for foreign affairs, Anwar Gargash, said in a series of tweets that “UAE stands against a decision by the separatist group and urges full implementation of a peace deal agreed last year for the south,” and "Frustration at delaying in implementing the Riyadh Agreement should not be a reason for the unilateral change of the situation."
More importantly, U.S. Secretary of State Mike Pompeo said Washington was "concerned" over the STC's declaration of self-rule, warning such actions threatened efforts to revive talks between the Yemeni government and Houthi rebels. Pompeo also highlighted that: "Such unilateral actions only exacerbate instability in Yemen. They are especially unhelpful at a time when the country is threatened by COVID-19 and also threaten to complicate the efforts of the U.N. special envoy to revive political negotiations between the government and the Houthi rebels," calling on the STC and Yemen's internationally recognized government to "re-engage in the political process provided under the Riyadh Agreement."
Martin Griffiths, the U.N. special envoy for Yemen, called the turn of events "disappointing," in a statement saying, "Now, more than ever, all political actors must cooperate in good faith, refrain from taking escalatory actions and put the interests of Yemenis first."
It has become very clear to all local and international communities that the STC is a fragile and weak entity that does not possess self-resources. And if the STC hopes that controlling Aden's port will provide some of the needed resources, it won't be nearly enough to pay salaries and provide electricity for a month. Besides, without the UAE's support, the STC's new attempt to control Aden is definitely going to fail.
UAE involvement
Since its first involvement in Yemen in March 2015 as part of a Saudi-led coalition, the UAE has been financing and training armed groups in the south. And it has been accused many times by Yemen's Hadi government of attempting to occupy the south of the country, where it has established strong military bases and trained thousands of fighters, such as the Security Belt Forces, Shabwani and Hadrami Elite Forces, the Salafi Amalqa and Abu Al-Abbas Brigades.
The weakening of Hadi's government has gone hand-in-hand with the UAE's growing influence in southern Yemen. In January 2018, fighting between the STC and the legitimate government broke out, resulting in separatist forces seizing almost all of Aden and surrounding the presidential palace, where at least 38 people were killed in three days of fighting, before the Saudi-UAE-led coalition mediated to lift the siege, placing the city under government loyalist control.
Nineteen months later, the STC regained control of Aden on Aug. 10, 2019, after four days of fighting which killed dozens and wounded more than 300 people.
A few days ago, the UAE stepped up its violent plans on Socotra Island by encouraging four military brigades on the island to announce their defection from the internationally recognized legitimate government and support of the STC’s force, which has two military camps on the island.
Indeed, the UAE-backed STC has been a prominent player in the five-year conflict in Yemen. The Emirates continues to financially, politically and militarily assist the STC to get its secession goal from northern Yemen, which undermines the original Saudi-led coalition mission to neutralize threats from the Houthis and support a united Yemen.
Without a doubt, the STC’s recent move has drawn local and international outcry. But if the Riyadh Agreement is not implemented soon, there will likely be new military confrontations.