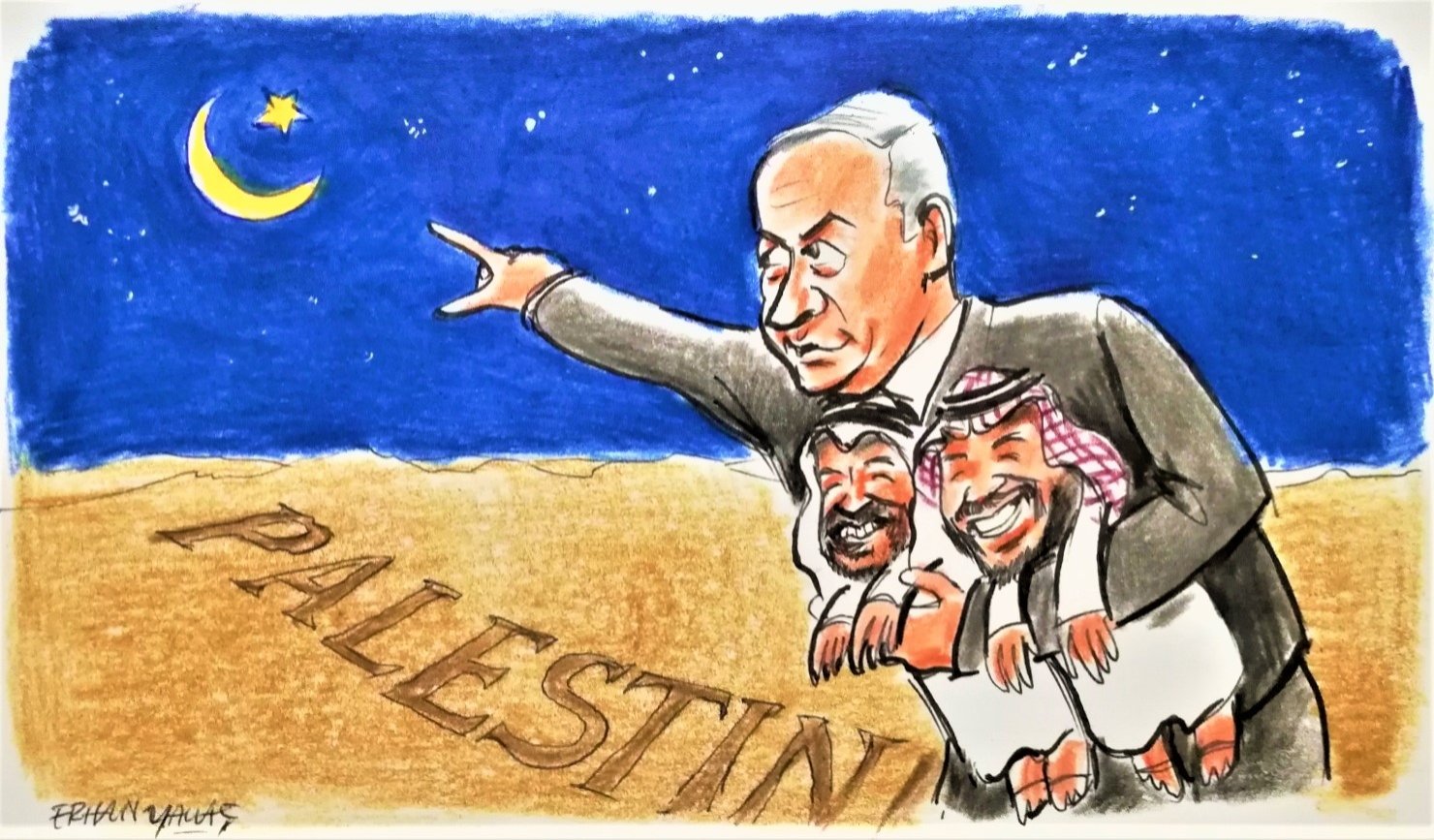 Putting aside the relics of past Cold War theatrics, Pakistan has been consistently struggling to advance peace and justice in the world. The struggle though has intensified. Pakistan currently experiences unprecedented pressure from the Gulf monarchies of Saudi Arabia and the United Arab Emirates (UAE), as well as the United States, to accept the apartheid state of Israel.

The Pakistani people would never succumb to this pressure. They have always stood in solidarity with the Palestinians and the Kashmiris, and no amount of coercion now is going to diminish their resolve. There is hardly a more pro-Palestinian population than the Pakistanis.

No one should dare propose to Islamabad normalizing ties with a state that militarily occupies, brutalizes and prevents justice to an occupied people.

Israel has effectively destroyed any iota of a "peace process," has expanded settler colonization of the West Bank and East Jerusalem and ruthlessly displaced the Palestinians for decades.

The Gaza Strip has been converted into an "open-air prison," regulating all aspects of the lives of these people who are subject to routine Israeli bombardment and massacres. The "normalization" then is that of deep injustice, sheer violence, ceaseless land theft and constant humiliation.

Indeed, Palestine is a symbol of an ongoing struggle for justice and dignity in a world where oppression of the weak reigns strong. Pakistan cannot bow down to these pressures if it is to maintain the moral authority to stand against any form of oppression, including that of India in Kashmir.

Pakistani prime minister, Imran Khan, cannot follow the morally bankrupt path of his predecessors. He would be morally accountable to the Pakistani population, as well as to the Palestinians and everyone who has struggled for decades to end this oppression.

Islamabad not only has to take into consideration the wishes of its own people but also the objective interests of the state. There are many compelling reasons as to why Islamabad should stand firm on its stance. There are several Gulf countries, like Qatar and Kuwait, that are already standing strong and are not moving an inch toward recognition.

Even if one puts aside the question of the inherent immorality of Israeli barbarism toward the suffering Palestinians, from the point of view of pure self-interested realpolitik, there is nothing to be gained by Pakistan here.

Giving in to these threats is not going to benefit Pakistan. It is certainly not going to give any leverage to Pakistan with Israel or India; rather, the vice versa will occur. It is laughable to believe that recognizing Israel will engender Tel Aviv to jeopardize its deeply intimate friendship with Indian Prime Minister Narendra Modi to appease a groveling Islamabad. The costs for Islamabad, on the other hand, will be incalculable: Pakistan will be at an utter loss in maintaining its legitimate moral high ground on the Kashmir issue.

The pressures to normalize, too, will most likely be short-lived. It is just a matter of standing strong till it dies out. Once Joe Biden takes over as the U.S. president on Jan. 20, the pressure will diminish. Besides, many powerful countries do not support normalization. These include Turkey and Iran.

These threats are mostly hollow or far-exaggerated and lack substance. The power of the axis, consisting of the UAE, Saudi Arabia, particularly the kingdom's Crown Prince Mohammed bin Salman (MBS), and Israel, is overstated as evident in their inability to weaken Qatar or defeat the Yemeni resistance.

At the same time, Pakistan has diplomatic and security levers against the UAE and Saudi Arabia that it can use strategically to cripple the not-so-subtle configuration of protective military power Islamabad has in the Gulf.

Even if we take some of these possible threats to Pakistan at face value and assume that Pakistani workers will be expelled from Saudi Arabia and potentially the UAE, the loss of remittances is likely to be harmful to the Pakistan economy in the short-term but also be harmful to the UAE and Saudi Arabia – since it will take at least one to two years to replace these workers.

It is to be noted that the percentage of these workers is quite high. In the medium- and the long-run, the return of these workers to Pakistan could reverse the brain drain, reduce reliance on remittances and create opportunities within the country itself.

This could potentially create a policy window for greater reform. Pakistan can use this moment of humiliating pressure and threats by ostensibly "brotherly Muslim countries" as a catalyst to reset Pakistan's foreign, domestic and socioeconomic relations, as well as rebuild its economic structure.

The Pakistani state needs to unequivocally proclaim that recognition of the current Israeli apartheid state is simply off the table. Khan needs to mobilize the people and take the National Assembly into confidence about the intense pressures on Islamabad to submit to this act of treachery.

The military high command should also be informed and persuaded of the dangers to Pakistan at this critical juncture by being on the wrong side of history once again – when in fact we thought we had finally escaped those archaic and reactionary winds that blew us in that direction in the previous decades of Pakistan's short history as a nation.

Moral imperatives, religious obligation, Islamic solidarity and national interests are all aligned to reject any move to recognize Tel Aviv. To do otherwise would be a betrayal of not only the Palestinians but the country of Pakistan, its people, its future – and would also be a rejection of our faith.

*Lecturer on Islam and Decolonial Thought and Director of the Center for Global Studies at the University of Management and Technology, Pakistan
RECOMMENDED