Post-Trump era and the future of Abraham Accords 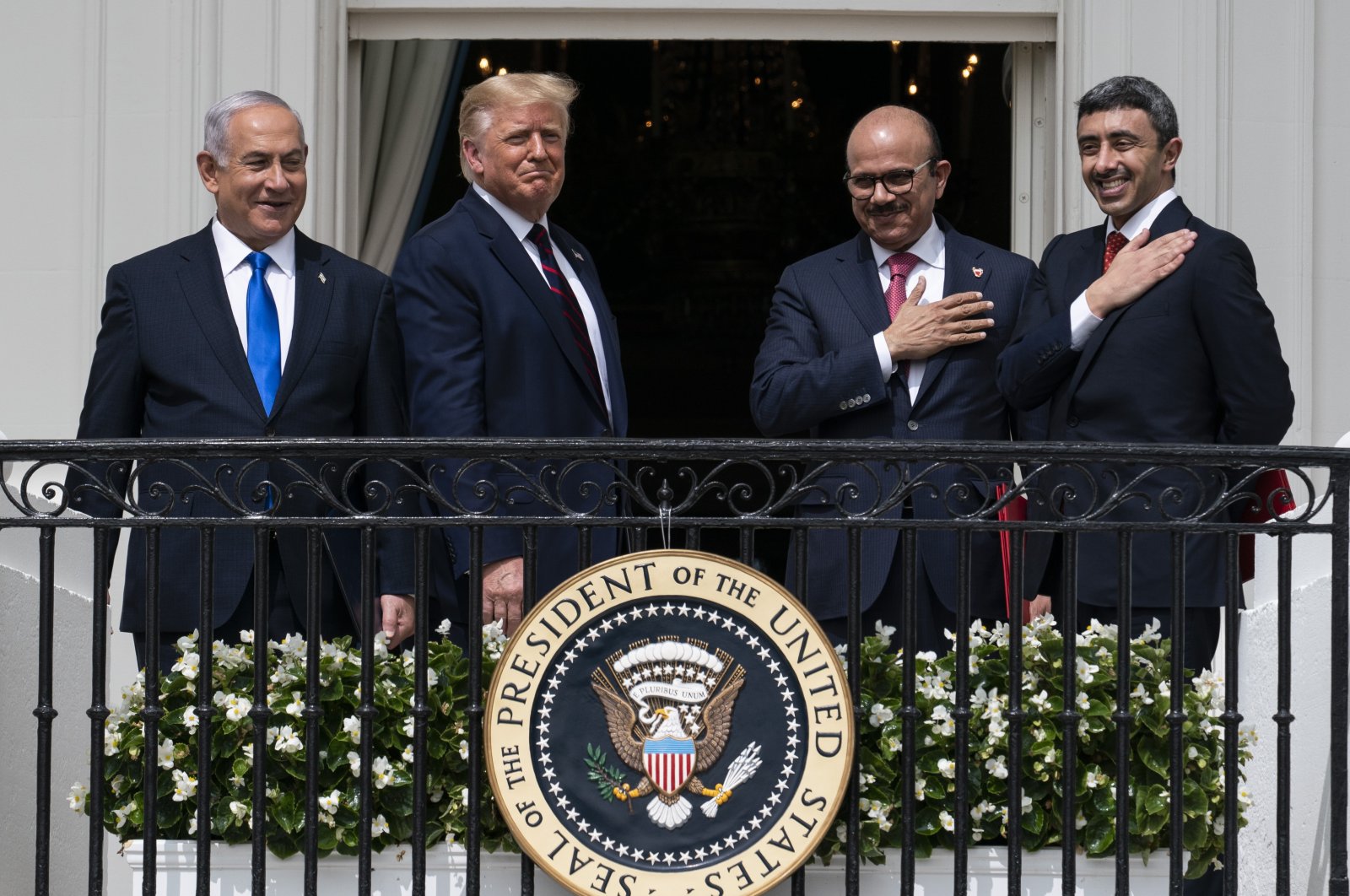 Despite U.S. President Donald Trump's defiance in rejecting the election results and refusal to concede, all facts point to the end of an era – an era embedded with lies, populist and nationalistic rhetoric, anti-immigration and anti-immigrant tirades and conspiracy theories, and guided by irrational and unreasonable policies domestically and internationally.

Trump’s rise to power and term in office redefined American hegemony and compelled others to reassess and reconsider their reliance on the United States.

Despite the severe national social and political hitches the Trump administration caused, which will have future implications, his most immense impairment at the international level has been undermining the importance and role of international organizations.

Since the day he came down the gilded escalator in 2015 to launch his political campaign, Trump downplayed the significance and the role of the international organizations and system.

And after he defied all expectations and shocked the world by beating Hillary Clinton in 2016, Trump continued to undermine the significance of collaboration and the critical role international organizations play to keep the international system operational.

In doing so, he pulled his country out of the Paris climate accord, withdrew from the Iran nuclear deal, pulled America out of UNESCO, destabilized NATO, terminated the relationship with the World Health Organization (WHO) at the worst time and challenged the core responsibilities of the United Nations.

But in reality, that was a naive and irrational choice. Joseph Nye, a well-known political scientist and the co-founder of the international relations theory of neoliberalism, argued in a post-election piece that Trump may have targeted international organizations, but the U.S. still needs them to maintain global hegemony. And the only way is by emphasizing worldwide cooperation and employing foreign policy free from resentment and anger.

Trump tried to isolate the U.S. from the rest of the world by reciting his “America first" policy, and the Middle East was not an exception.

Throughout Trump's term, the Trump administration’s regional efforts were not helpful; rather they were disparaging. His son-in-law and adviser Jared Kushner was assigned to frame and execute America's foreign policy toward the Middle East, and the outcome was not encouraging.

Most of the administration's policy in the region was strategically incoherent and rambling. Actions such as bombing Syria and considering the assassination of its leader, getting close to a military confrontation with Iran, being an accomplice in the killing of Saudi journalist Jamal Khashoggi, assassinating Iranian commander Qassem Soleimani in a foreign country, supporting the Qatar blockade and finally coming up with the Trump-Kushner peace agreements days before the election do not show coherence or consistency. Rather they show an unpredictable, unstable and discursive foreign policy.

One of the critical issues at which the Trump administration, like its predecessors, failed miserably was solving the problem of Palestine and Israel.

Trump even explicitly moved the U.S embassy to Jerusalem, which complicated the region's situation and stamped out expectations of solving the Palestine-Israel conflict.

Not only that, but the U.S. administration also approved the continuation of the illegal settlements in the occupied West Bank. Then, suddenly in the last months of his term, at the time of elections, Trump comes up with what his camp has called the Deal of the Century, which basically was a normalization deal between several Arab states in the Middle East and Israel – the Abraham Accords.

As the masterminds of the accord claimed, the Abraham Accords' primary incentive was to bring peace and stability to the region, which does not align with the administration's policies in the region.

What makes the timing of the deal more suspicious is the fact all of these countries were not at war with Israel.

What sort of peace agreement is it if the warring parties are not included? It raises eyebrows and questions concerning what inspired the Abraham Accords.

Jeffrey Goldberg, editor-in-chief of The Atlantic, answered this question in a piece he wrote after the deal was struck. He claimed that the so-called peace agreement would not bring peace to the Middle East, because it only benefits its masterminds: Trump, the United Arab Emirates’ (UAE) Mohammed bin Zayed (MBZ), Saudi Crown Prince Mohammed bin Salman (MBS) and Israeli Prime Minister Netanyahu. Each of them wanted this deal for their political purposes and survival.

For example, Trump, who was the primary architect of this deal, wanted it for two reasons: first, to boost his reelection campaign by claiming victory in the Middle East and, second, to distract from his lousy handling of the pandemic in the public discourse.

Netanyahu wanted it for a variety of reasons: first, to present himself to Israeli voters as a statesperson with an excellent reputation on the world stage and, second, to distract voters from his horrible management of the pandemic. Third, he got to establish diplomatic relations with new Arab states.

The two de facto leaders of Saudi Arabia and the UAE, MBS and MBZ, were motivated by the same purpose – to present themselves as constructivist leaders.

Since they plunged into the national politics of their countries, both have been accused of getting involved in other countries' local politics, from heavily intervening in the elections in Somalia and the civil war in Libya and Yemen to the coup d’etat in Egypt and the apprehension of the leader of a sovereign country. These two wished and craved for this deal more than anyone to unburden the notoriety, obloquy and infamy associated with their names.

However, given that Trump allied with Netanyahu and these reckless and authoritarian leaders, it is evident that the region has gotten messier and more chaotic. The assassination of the top Iranian scientist inside of Iran stands as an excellent example.

It is crystal clear the Abraham Accords were not driven by aspirations for peace but rather personal and political ends, and if there is one thing that the Middle East does need, it is peace plans that serve the interests of certain groups. That is what the Abraham Accords stand for.

But Trump's election loss raises the question of the future of the Abraham Accords.

It is a possibility that this coalition might survive because they all need each other for their feuds with Iran, and as the ancient proverb says, the enemy of my enemy is my friend.

Therefore, the reality that they supposedly have one enemy might compel them to stick to the deal and even seek further cooperation, even military cooperation perhaps. But much will depend on the foreign policy of the incoming administration.

It is no doubt that their approach toward the Middle East will be in stark contrast to that of the outgoing administration.

However, since then, U.S. President-elect Joe Biden has introduced his foreign policy team, including the secretary of state who will have the primary responsibility of framing and executing his foreign policy.

Many have already signaled the return of former President Barack Obama's foreign policy. That means Biden's policy in the Middle East will have much resemblance to that of the Obama era.

Return of the old guards

Most of Biden's foreign policy picks, if not all, held senior positions in the Obama administration. Among those are Antony Blinken for the secretary of state and Jake Sullivan for national security adviser.

Their selection has garnered a great deal of criticism and backlash from the right-wing, which portrayed them as the return of the old administration or a third Obama term. But the comparison with his old boss has always been there since Biden entered the race.

Many are suspicious and apprehensive about what will differentiate Biden and Obama policy-wise domestically and internationally, which begs the question, what was Obama's approach to the Middle East?

During his campaign, Obama promised to reverse the interventionist policies of his predecessor in the Middle East, which obligated his administration to face the region with caution.

The Cairo speech in which he tried to reach out to the Muslim world is an excellent example of his endeavors to change the American foreign policy tone.

But his failure to translate such promises into action and reality was not a strategic dissonance but rather his team's inability to reorientate the traditional American foreign policy to see a different outcome.

Analysts describe Obama's approach to the Middle East as a combination of realist and idealist policies. He believed in regime change in the Middle East but not through force or military intervention. He preferred diplomacy and social revolutions.

His administration’s silence on the Arab Spring in Egypt and Syria and his enthusiasm to solve the Iran matter through negotiation and diplomacy give a clear picture of the idealist side of Obama’s foreign policy.

Many believe since America became mainly energy independent, Obama saw the Middle East as expendable, and the only reason his administration remained engaged was to show its alliance to Israel and fight Daesh.

On the other hand, proponents of his foreign policy characterized him as the greatest terrorist hunter in the history of America by using drone strikes, and that shows his hard and realist policies.

Therefore, it is believed Biden will likely follow in the footsteps of his old boss and remain engaged in the Middle East but not like the Trump administration.

It is expected that Biden will call out the regimes in the region for their atrocities and human rights violations, unlike the outgoing administration, which will indicate that the Middle East is no longer a priority for U.S foreign policy.

Even de facto leaders like MBS and MBZ realize that and are trying to step up and fill the power vacuum the U.S. will leave behind.

However, it is not clear what Biden's views are on the Abraham Accords, but there is a good chance that he will do what Obama did and let the Middle East play out. His decision to go back to the Iran nuclear deal will anger the old regimes in the Middle East and could conceivably keep the primary beneficiaries of the deal as MBS, MBZ and Netanyahu.