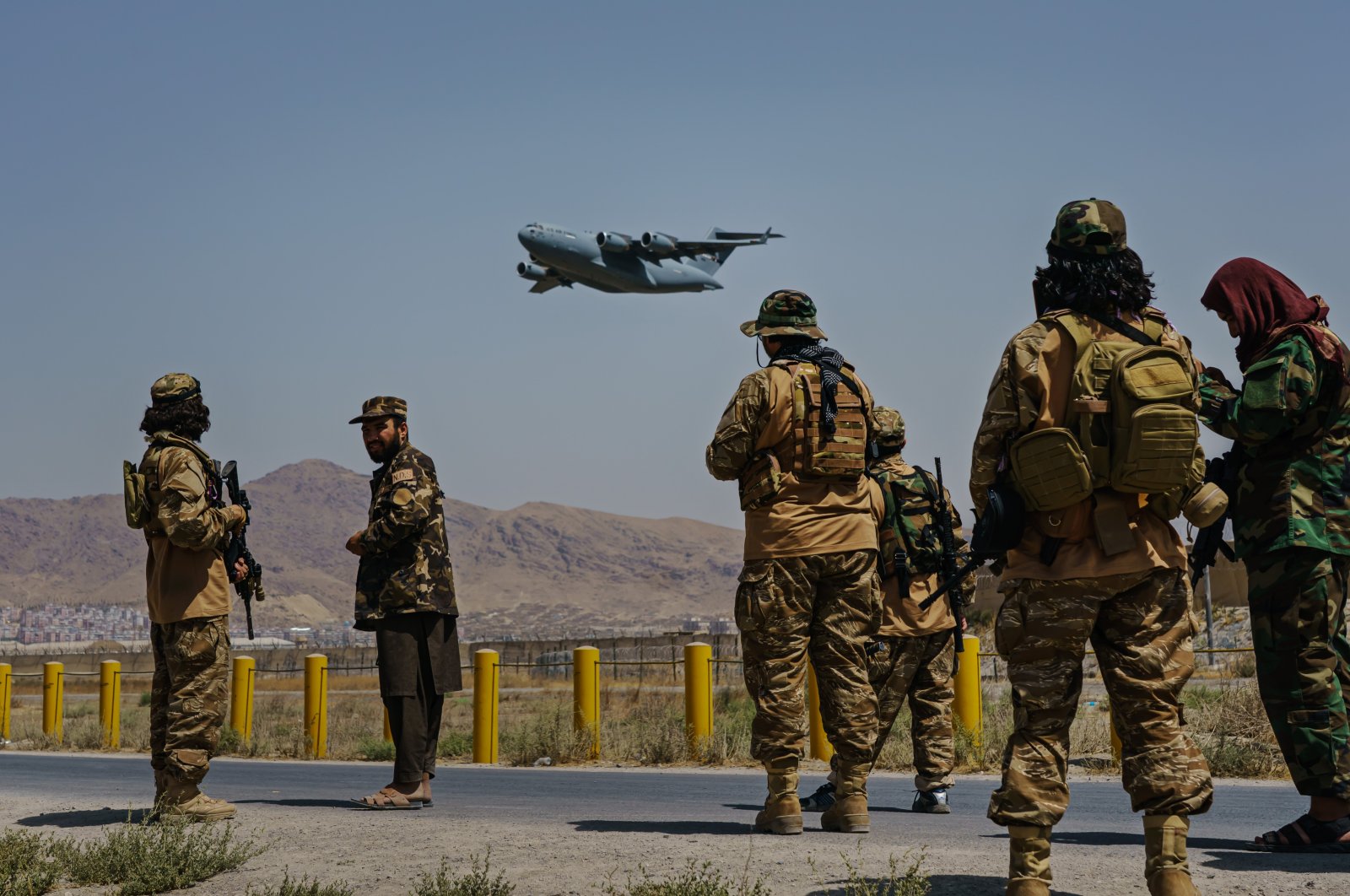 A C-17 Globemaster takes off as Taliban fighters secure the outer perimeter, alongside the U.S.-controlled side of Kabul Hamid Karzai International Airport, Kabul, Afghanistan, Aug. 29, 2021. (Photo by Getty Images)
by Abdullah Jurat Dec 15, 2021 12:05 am

Afghanistan became the focal point of international humanitarian and political debates throughout the United States invasion of the country in 2001 and its withdrawal in 2021. Considering the 20 years of the so-called democratic regime in Afghanistan and the technological advancements in telecommunications, the latter was more dramatic and overtly watched by the international community. However, the tragedy of the occupation has for the most part been misrepresented and limited only to the U.S. invasion. Global public opinion of occupied Afghanistan was directly linked to the U.S. presence in the country. Thus, the post-U.S. Afghanistan is being promoted as a freed occupied land mainly by the anti-Western media. This trend is being highly cherished within the Islamic world too. Nonetheless, the irony is that Afghanistan was occupied before the U.S. intervention in 2001, and it is currently under Taliban occupation.

An old expression says that “the Sun cannot be hidden with two fingers.” The historical record and unclassified publications, such as former U.S. Secretary of State Hillary Clinton’s interview on Fox News, boldly underline the U.S. involvement in financing and training armed groups referred to as “Mujahedeen” created to force the Soviets out of Afghanistan.

The Mujahedeen comprised of seven different factions based in Pakistan named the “Peshawar Seven.” After defeating the Soviets, these seven groups failed to share power and Pakistan’s disillusionment brought the emergence of a radical movement called the “Taliban” led by ethnic Pashtun and backed by the Pakistani intelligence community. It created another civil war from 1992 until the Taliban’s 1996 occupation. The Taliban regime (1996-2001) was first and foremost recognized by Pakistan, then Saudi Arabia and the United Arab Emirates (UAE). It was an externally supported internal colonization by an ethnic majority that committed war crimes against ethnic minorities and women. One could not trace any sign of freedom, be it religious or political.

Simultaneously, Afghanistan had another government recognized by the international community under Burhanuddin Rabbani’s presidency. In a sense, the Taliban regime was controlled and administered by Pakistan's intelligence agency. Practically, Afghanistan was occupied. However, it was far from the public.

After the 9/11 terrorist attacks in the U.S., Afghanistan came to the forefront of international debates. Because there was global attention on post-2001 Afghanistan where the concept of the “war on terror” was born, the occupation became an overly cited term for this country. Nonetheless, the 20 years of U.S. occupation in Afghanistan came to an end with U.S. President Joe Biden’s decision to execute a total withdrawal.

The Taliban had drastically increased their aggressive attacks from the far north to the far southern part of the country. They kept adding to their shadow government by expanding their territory day by day. Afghan troops were left to die on battlefields with the Taliban. The irresponsible treatment by the government was considered an act of betrayal by the combatants in the army. Thus, troops avoided confrontation with the Taliban. A former army member from the Takhar province said, “when the Taliban surrounded us, nobody came to our help ... we contacted the regional commander to send us support, but no one responds till you die!” under the condition of anonymity.

There was an understanding among the public that fighting against the Taliban was fighting for former Afghan President Ashraf Ghani, who they considered unworthy. The Afghan army was made up of paid fighters who had mainly joined the military for financial reasons rather than having a strong sense of patriotism. Even those chunks of patriot soldiers were alienated when they were left alone on the battlefields without military backup. On the contrary, the Taliban fighters were passionate and prepared to die for the sake of their radical religious beliefs. It made them fearless warriors on the battleground. A corrupt, predatory elite in power was holding the strings to pull according to their own will. The only concern they had was the survival of the regime one way or another. So, they gambled and lost badly.

It should be noted that Afghanistan is a land of insolence and is well known as the “graveyard of empires.” Now the Taliban are back, bringing their insolence, but there is still an occupation. It is an occupation, particularly for the young generation, women and ethnic minorities. It would be considered insane to accept the theoretical foundation that the abandonment of the fundamental rights of women and minorities is not an occupation.

Since the U.S. presence in Afghanistan was interpreted as an occupation by the Taliban and their supporters, the current Taliban control could be construed as such by the opposition. Moreover, Pakistan’s intelligence service chief Faiz Hameed’s immediate visit to Kabul a few days after the Taliban took over and his overstay in the capital had raised concerns. How could such a profile stay in Kabul when there is no government? An Afghan authority did not invite him. He stepped in as he wished to do so. Nonetheless, the Taliban were and will be the greatest proxy that Pakistan has ever backed.

For the time being, Afghans are stateless, be it inside or outside the country. However, any recognition of the current Taliban regime by the international community without fundamental changes in their beliefs and traditions would be the affirmation of barbarism in the 21st century, and the consequences would be disastrous!