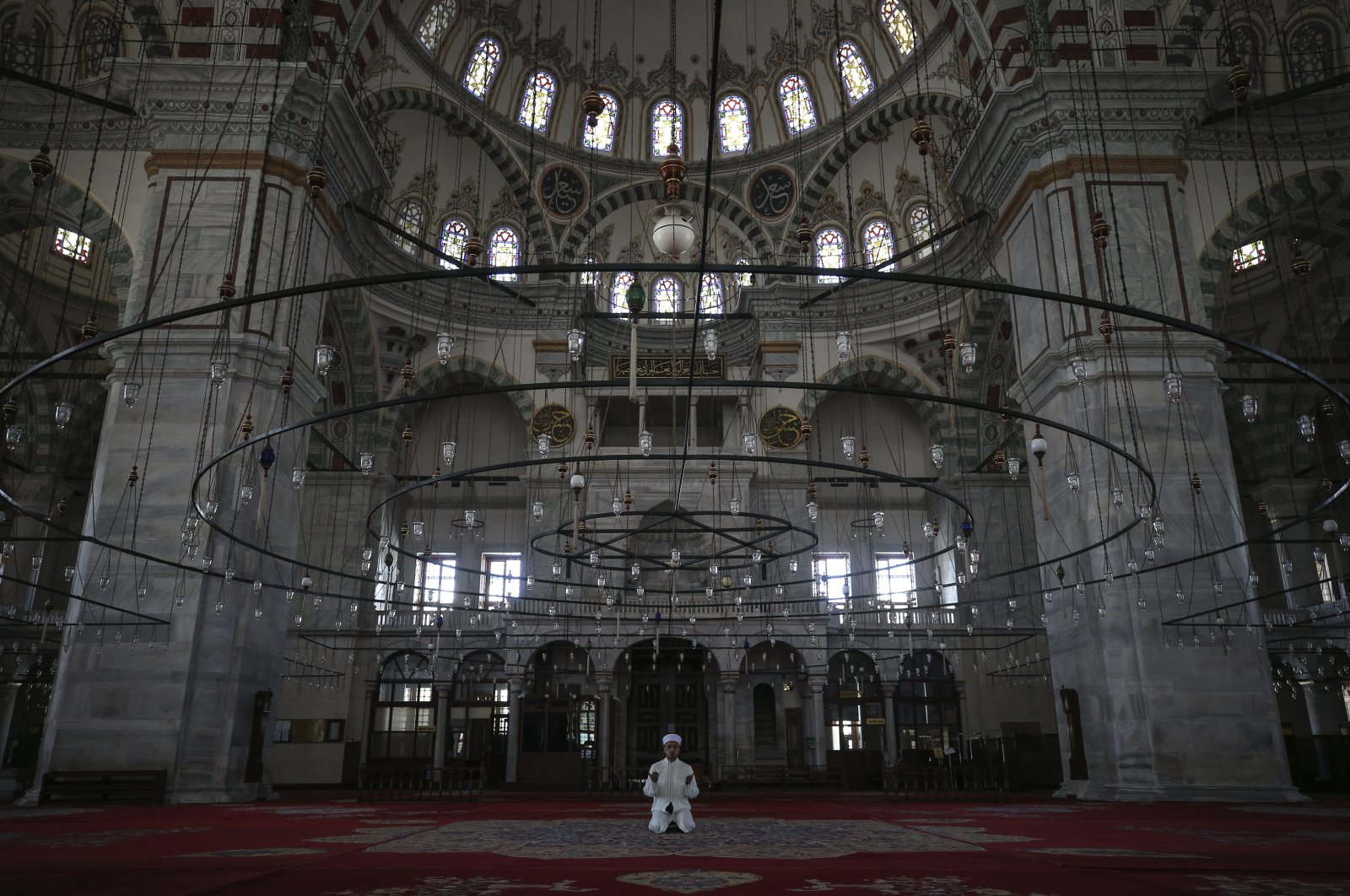 Esat Şahin, imam of the iconic Fatih Mosque, holds prayers on the first day of Ramadan without the public due to the coronavirus restrictions in Istanbul, Turkey, April 24, 2020. (AP Photo)
by Najla M. Shahwan May 07, 2020 12:05 am
RECOMMENDED

The Muslim holy month of Ramadan arrived this year at the most challenging point of the COVID-19 pandemic.

The ninth month of the Islamic world's lunar calendar marks the occasion when Allah revealed the Quran to the Prophet Muhammad, while fasting is one of the five fundamental pillars in Islam.

A verse in the Holy Quran prescribes fasting for all mature and healthy Muslims as an act of worship, a chance to grow closer to Allah and a way to become more compassionate to those in need.

In this holy month, Muslims abstain from food, drink and smoking from dawn to sunset for a period ranging from 12 to 20 hours, based on the season and geographical location.

Two weeks ago, Ramadan began with millions of Muslims gearing up for fasting under the lockdown conditions brought on by the coronavirus pandemic.

This year’s Ramadan is like no other for 1.8 billion Muslims globally, with no nightly prayers at the mosques, no breaking fasts in the evenings with friends and families and no large congregational prayers planned to celebrate the end of the month on Eid, or Bayram.

As many Muslims usually increase their attendance at mosques during this holy month and congregate for longer Taraweeh prayers, these rituals have been canceled and moved to the home.

Plus, Muslims who were used to spending consecutive days and nights at mosques during the last 10 days of Ramadan (i’tikaf) for prayers, will not be able to do so this year.

Although cultural and religious practices are regularly observed throughout Ramadan, gatherings of families and friends who unite to break their fasts together after sunset are not permitted in many places due to the onus of social distancing.

Fasting is obligatory for all adult Muslims who are not acutely or chronically ill, traveling, elderly, pregnant, breastfeeding, diabetic or menstruating.

It is a deeply spiritual time for followers of the Islamic faith and many will choose to fast.

However, some people are particularly vulnerable to the coronavirus. They may choose not to fast if they are showing symptoms of COVID-19 or if they fear that refraining from food and drink may weaken their immune system. The elderly and the poor may be excused for this reason.

With the current burden placed on the world by COVID-19 and the precautions raised by the World Health Organization (WHO), especially the necessity for keeping the throat wet, there has been an ongoing debate by many scientific and public communities around the world whether or not adult Muslims should fast during the month of Ramadan this year.

Studies have been conducted on humans and animals that have shown the ability of fasting to improve the body's resistance to bacterial infections. At the very least, these studies showed no adverse effect of fasting on increasing the severity of the impact of COVID-19 on the immune system.

Since the transmission of COVID-19 is facilitated by close contact between people and the virus is spread through respiratory droplets and contact with contaminated surfaces, during Ramadan several countries have implemented physical distancing measures aiming at interrupting transmission by reducing interaction between people. These measures offer a fundamental control mechanism in order to stem the spread of infectious diseases, particularly respiratory infections, associated with large gatherings of people.

For its part, the WHO recommended the canceling of social and religious gatherings, advising virtual alternative platforms instead, and countries around the world took different measures to control the spread of the virus, trying to balance restrictions with traditions.

In Palestine, Jerusalem Islamic Waqf made the decision to close Al-Aqsa Mosque compound to Muslim worshippers throughout the holy fasting month of Ramadan.

The council said the move was "in line with legal fatwas (clerical opinions) and medical advice," adding that Muslims should "perform prayers in their homes during the month of Ramadan, to preserve their safety."

In one sign of regularity, the Muslim call to prayer still takes place five times daily at the site, with religious officials allowed entry. Tens of thousands would usually pray in Al-Aqsa during Ramadan, rising to hundreds of thousands in the final days. However, the prayers are now broadcast live from inside the mosque.

“Such a decision was the first in 1,400 years; it is tough, and it pains our hearts,” the director of Al-Aqsa Mosque said.

Jordan has suspended the special evening Taraweeh prayers at mosques, urging citizens to offer them at home. Meanwhile, in Egypt, all Ramadan activities – including group iftars and charity banquets – have been banned.

In Iran, Supreme Leader Ayatollah Ali Khamenei has also called on people to avoid collective prayers. Monthlong Ramadan bazaars with stalls selling food, drinks and clothes, usually bustling during the course of the month, have been barred in Malaysia, Brunei and Singapore.

Meanwhile, Pakistan has allowed congregational prayers at mosques during Ramadan, but worshippers have to keep a distance of 2 meters (6 feet) from each other and are encouraged to bring their own prayer mats.

Indonesia, home to the world’s largest Muslim population, has banned the annual exodus by which city dwellers return to their home villages to spend time with family, while Saudi Arabia has closed the two holy mosques in Mecca and Medina, canceling the annual hajj pilgrimage, which would normally see millions gather at some of the holiest Islamic sites.

U.K. mosques are on lockdown and Muslims are practicing Ramadan online and turning to social media to keep in touch. This year’s Ramadan will be unique for Britain’s estimated 2.6 million Muslims, with a reliance on technology to make the best of the situation.

Social distancing and self-isolation run counter to the very essence of Ramadan, which emphasizes community – a time to make new friends, as well as reconnect with loved ones.

Muslims around the world are observing the holy month of Ramadan this year in a different atmosphere, and what the world is going through at present represents a pivotal historical moment and a page in the contemporary history of humankind.

Muslims will try to keep Ramadan spirits high amid virus restrictions and will maintain the integrity of the human body both physically and spiritually with the cherished rituals of Islam’s holiest month, having more time for reflection and a great opportunity to be closer to God.