Refugee crisis as a consequence of modernism 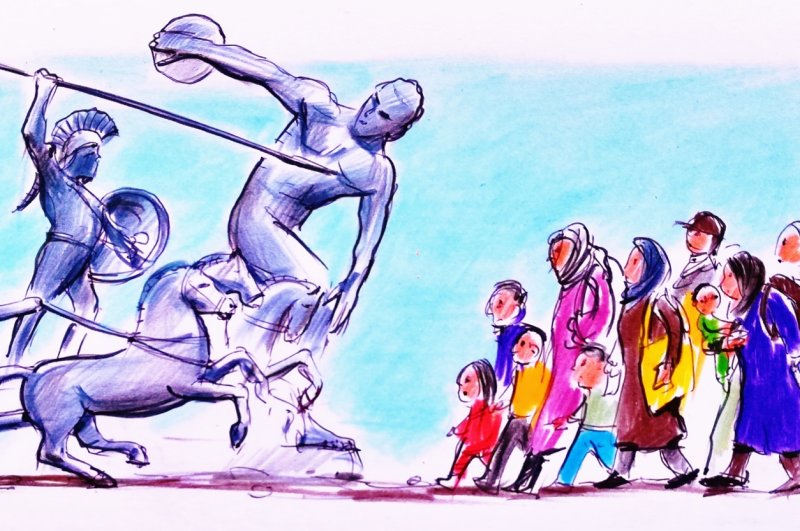 Modern ideology's intolerance of 'the other' is what emboldens hatred toward refugees, a trend clearly being exercised at the Greek border

As the Syrian war enters its 10th year, the conflict has entered a new phase. After the latest tensions between the Assad forces and the Turkish military resulted in the deaths of 36 Turkish soldiers, the Turkish army has been put in a position to launch a military offensive in Idlib to defend its borders and further prevent a new wave of refugees. So far, Turkey seems to have been highly effective in its military operation against Assad forces, as the distributed videos show the Turkish Armed Forces (TSK) destroying scores of Bashar Assad regime targets, with the armored vehicles, air defense systems, jets and soldiers taken out by Turkish armed drones. This is probably the biggest shock Assad has faced since the beginning of the war.

In light of these developments, we are also witnessing another issue being faced by Europe: a new refugee influx. As Turkey made it clear it will no longer stop migrants from leaving the country a few days ago, thousands of refugees aiming for Europe have been trying to find a way to cross the Greek-Turkish border. Videos show that thousands of refugees are now stuck in an actual no man’s land between the Turkish and Greek border after Greece closed its border, with the Greek police firing teargas to push back migrants. The clashes between the refugees desperately trying to cross the border and Greek police have caused some unpleasant scenes shown in photos and videos, and Greece seems to be standing firm in its decision to not welcome the refugees to the country.

The record of approach

However, this is not the first time that European countries have adopted a hostile stance on migrants. As witnessed in the hostile environment for refugees in Hungary back in 2015, videos showed how badly refugees were treated by local authorities and even local journalists. Of course, this crisis is not just about Greece and Hungary, it is part of a much larger issue. Europe has been reluctant to take in refugees since the start of the unrest in Syria. Instead, they have expected Turkey to shoulder the responsibility for migrants without sharing the burden.

Following these incidents, we must now question how Europe, a staunch supporter of human rights, can justify treating refugees this poorly. How could one be an advocate for human rights while simultaneously violating the same rights by denying refugees entry and completely ignoring the growing catastrophe? In this article, I will explore the real reasons behind the West's hypocrisy regarding the refugee crisis.

In "Modernity and the Holocaust," Zygmunt Bauman asserts that the Holocaust was an inevitable outcome of modernity, as it was perpetrated by ordinary people for ordinary reasons that exist even in today’s world. “In short,” he says, “the Holocaust was not an antithesis of modern civilization and everything (or so we like to think) it stands for.” Bauman considered modernity and modern civilization a negative phenomenon because, for him, modernity represents an ethnic, religious, linguistic and cultural homogeneity, which creates a kind of uniformitarian entity. This is a result of the mentality of modernity that necessitates standardization that makes it easier to manage the masses.

As a consequence, Bauman says there is a new type of state that emerges: the gardening state. The gardening state is quite like a gardener and grows plants, a metaphor for desired identities, and cultivates a garden, or a nation, just like a gardener does. It also makes sure that the unwanted plants, or unwanted identities, are cut out from the garden.

Today's refugee crisis today is an act of a gardening state. The gardening state does not sincerely care about human rights violations in other gardens as long as its garden is coming along nicely. In his other book "Modernity and Ambivalence," Bauman portrays the stranger, a refugee in our case, as a negative object. This is because the stranger was not grown in the nice garden, and the gardening state stands as a guard. As a result, the stranger is always considered the object of fear. They are, therefore, seen as potential danger produced in other gardens, threatening to enter the nice garden protected by the well-controlled walls. It is thought that the outsiders cannot be controlled if they are granted entry to the nice garden, and this will pose a greater risk, creating fear among the plants, or desired identities, in the garden.

Bauman also talks about wasted lives, which are products of liberal modernity. For him, as long as the technological progress continues to shape ideas of human progress, we will never see an end to the production of disposable lives, even in the nice gardens. This idea is very similar to that of Henry Giroux’s. He also thinks the neoliberal regime is prone to favoring disposal. Both think even nice gardens have undesired plants, and the gardening state makes sure that the desired plants are well protected by the walls from the unwanted ones. This is an aspect of modern cities that guarantees the survival of the fittest these days. For Giroux, because of these facts, the neoliberal modern state actually signifies an authoritarian character in its nature despite the fact that it is known otherwise, which is controlled by only a handful of billionaires.

In light of the observations from two distinctive thinkers, I interpret the refugee crisis as a result of a modern ideology that does not tolerate "the other" and dismisses "the other" to keep its garden flourishing. Instead, outsiders are dehumanized by neoliberal welfare states that have no intention of sharing their welfare with strangers. This is the ulterior motive behind the media's immoral treatment of Syrian migrants who have lost everything and are badly in need of help. These refugees are unwanted plants whose gardens have been demolished. They are wasted lives, and they are probably the “Wretched of the Earth” as Frantz Fanon puts it. I believe everyone needs to understand that we all may see our garden ruined one day, so we can conjure some empathy and act accordingly. This is what makes us human beings, isn’t it?

*Holder of a Ph.D. in Sociology from the University of Leeds