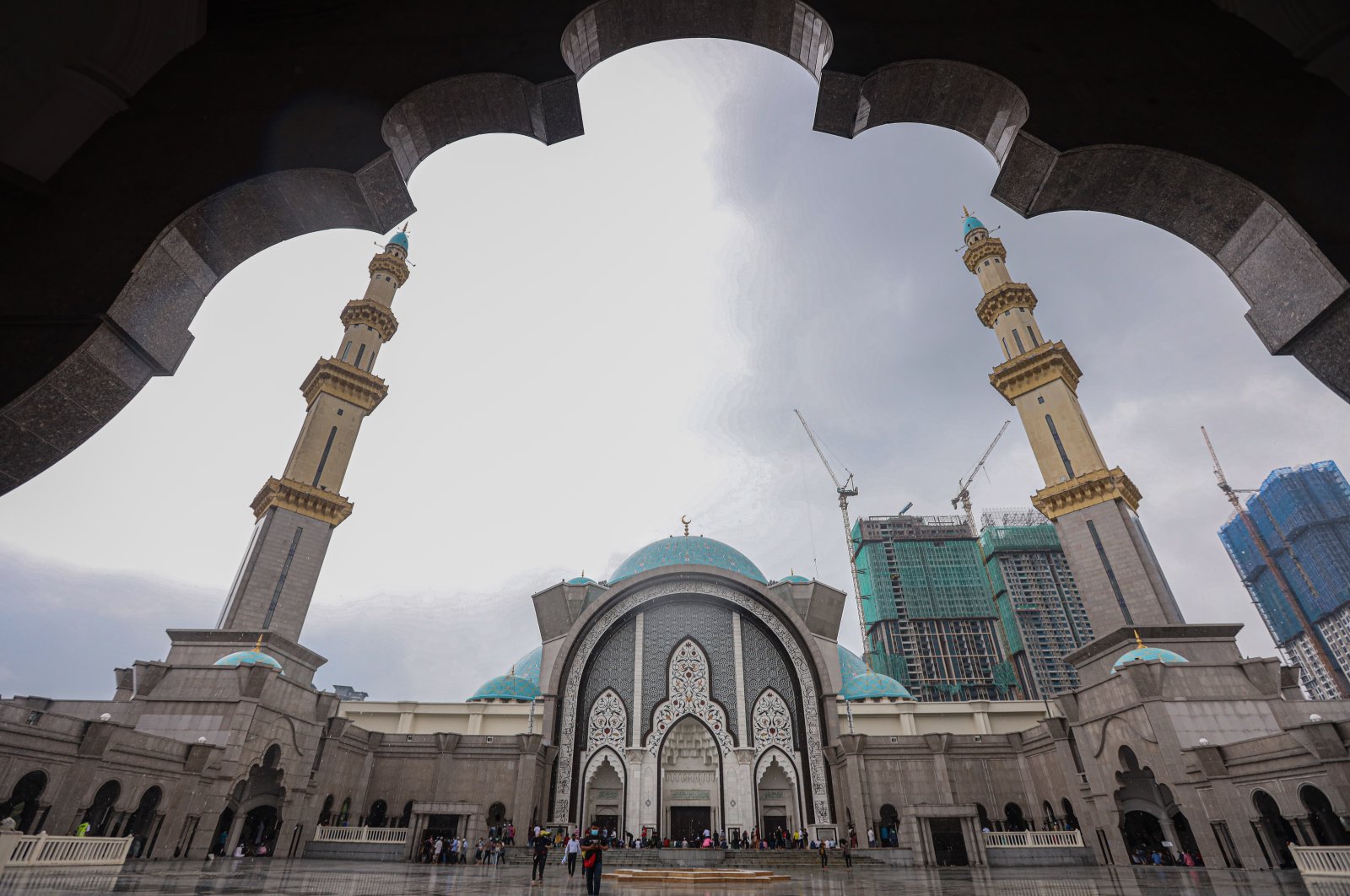 Worshippers leave Wilayah Mosque after their prayers on the first Friday of the holy month of Ramadan, Kuala Lumpur, Malaysia, April 16, 2021. (Photo by Getty Images)
by Nurgül Sevinç - Foyasal Khan May 04, 2021 12:05 am
RECOMMENDED

As we write this, the world community is witnessing one of the most devastating humanitarian crises in the history of mankind, together with deep worries and anxieties. We are not sure where its end is. Although the COVID-19 pandemic initially began as a health crisis, it took only a few months for it to turn into a global economic crisis due to the great lockdown-induced slowdown of economic activities.

Many economists and global thinkers analyze this crisis, unlike any other, as a result of following a suicidal path in the pre-pandemic time, which enhanced global warming, made the concentration of wealth in a few hands and encouraged the invasion of artificial intelligence to make human beings redundant in the world.

Under this flawed model of a linear economy, production and consumption, processes were not only depleting resources and biodiversity but also leading to waste and climate vulnerability.

In this situation, without switching from a linear to a sharing or circular economy, that is to prevent waste by making products and materials more efficient so that they can be reused, the achievement of the U.N.'s Sustainable Development Goals (SDGs) by 2030 could be a far cry from reality.

Islamic finance as a model

In a recent Islamic finance conference held in the Qatari capital Doha, speakers confidently stated that social and humanitarian aspects of Islamic finance can be a pioneering model of the sharing economy while discussing the potential of Islamic social finance in achieving sustainable development.

Discussing the various features and size of the sharing economy, Hamad Bin Khalifa University professor Nasim Shah Shirazi expressed the hope that the sharing economy can surpass the COVID-19 crisis by way of breaking the mold of traditional employment, bridging funding gaps, bridging the gap between demand and supply and utilizing technology appropriately in urban and rural development.

The former lead economist of the Saudi Arabia-based Islamic Development Bank (IsDB), however, warned that the transformation of the global economy into a sharing economy is not an easy task.

To this end, countries need to address challenges including trust deficit, the digital divide stemming from a lack of technological equipment, concerns about information security and privacy, platform monopolies, the exclusion of the traditional industries and overuse of rights.

Advising to focus on sustainable consumption, he said governments around the world would have a role to play in promoting the sharing economy. Achieving SDGs requires them to collaborate effectively with private sectors on projects that have a high socio-economic impact, as well as to regulate the industry while implementing policies that encourage innovation.

The role of SDGs

In his presentation on the role of social finance institutions in achieving SDGs, Istanbul Sabahattin Zaim University professor Mehmet Bulut first defined sustainable finance by emphasizing its altruistic perspective, which takes the ability of future generations in meeting their needs into account.

Accordingly, in promoting Islamic social finance, in addition to the contribution of governments, social finance institutions also have a very significant role. Specifically, zakat, awqaf and infaq have been historical models that provide public goods, and thereby considerably contributing to social welfare.

From a broader perspective, Islamic finance institutions provide solutions to socioeconomic concerns. In particular, zakat has a role in achieving at least seven goals out of 17 SDGs starting from the alleviation of poverty to preventing environmental degradation.

Bulut also stressed the Badan Amil Zakat Nasional (BAZNAS) as the zakat authority in Indonesia. According to BAZNAS, the zakat potential of Indonesia was 3.4% of the Indonesian gross domestic product (GDP) in 2016, which is a considerable percentage.

The institution distributes the zakat funds in different fields such as economy, education, da’wah, health and social sectors. In addition to zakat, he also underlined the role of awqaf in achieving SDGs.

In Muslim majority countries, according to studies, the assets of global waqfs are expected to be worth $1 trillion. Also, throughout the ruling of the Ottomans, awqafs played a crucial role in almost eliminating poverty.

Finally, he added the role of infaq to his discussion. Through voluntary and obligatory spending, infaq contributes to sustainable human development.

At a practical level, the contribution of Lembaga Tabung Haji Malaysia, a Malaysian hajj pilgrimage fund board, as an Islamic institution of social finance to the Malaysian economy and religious life cannot be overemphasized.

The board's group managing director Datuk Nik Mohd Hasyudeen Yusoff stated that the fund board has been providing different types of facilities for Malaysian hajj pilgrims since 1963. It provides world-class hajj services, including accommodation, flights, hajj guidance and meals.

Thus, in different aspects, it has a leading position regarding social finance and sustainability. In particular, it is the first of its kind as an Islamic crowdfunding platform and the first waqf featured in unit trust funds. Moreover, it is a qualified sustainable and responsible investment fund.

Not only the historic institutions but also the current ones, such as BAZNAS in Indonesia and Lembaga Tabung Haji in Malaysia, demonstrate this. They help people perform their religious activities and provide a productive economy that can stand on its own legs.

Finally, it can be said that significant contributions of Islamic social financial tools such zakat, sadaqah and waqf in forming a flourishing Muslim economy before the fall of the Ottoman Empire made us strongly believe that Muslim economies can bring back their golden age in the 21st century and beyond by reviving such Islamic social financial institutions to increase their positive impact on societies and economies in the world.

For these institutions to be effective and responsive to the demands of the 21st century, it is imperative for Muslim countries to come forward with not only functional change but also structural reforms.

**Ph.D. holder in economics from International Islamic University Malaysia, a research fellow at the Bangladesh Institute of Islamic Thought