Rise of the civilizational state in post-nation-state Middle East 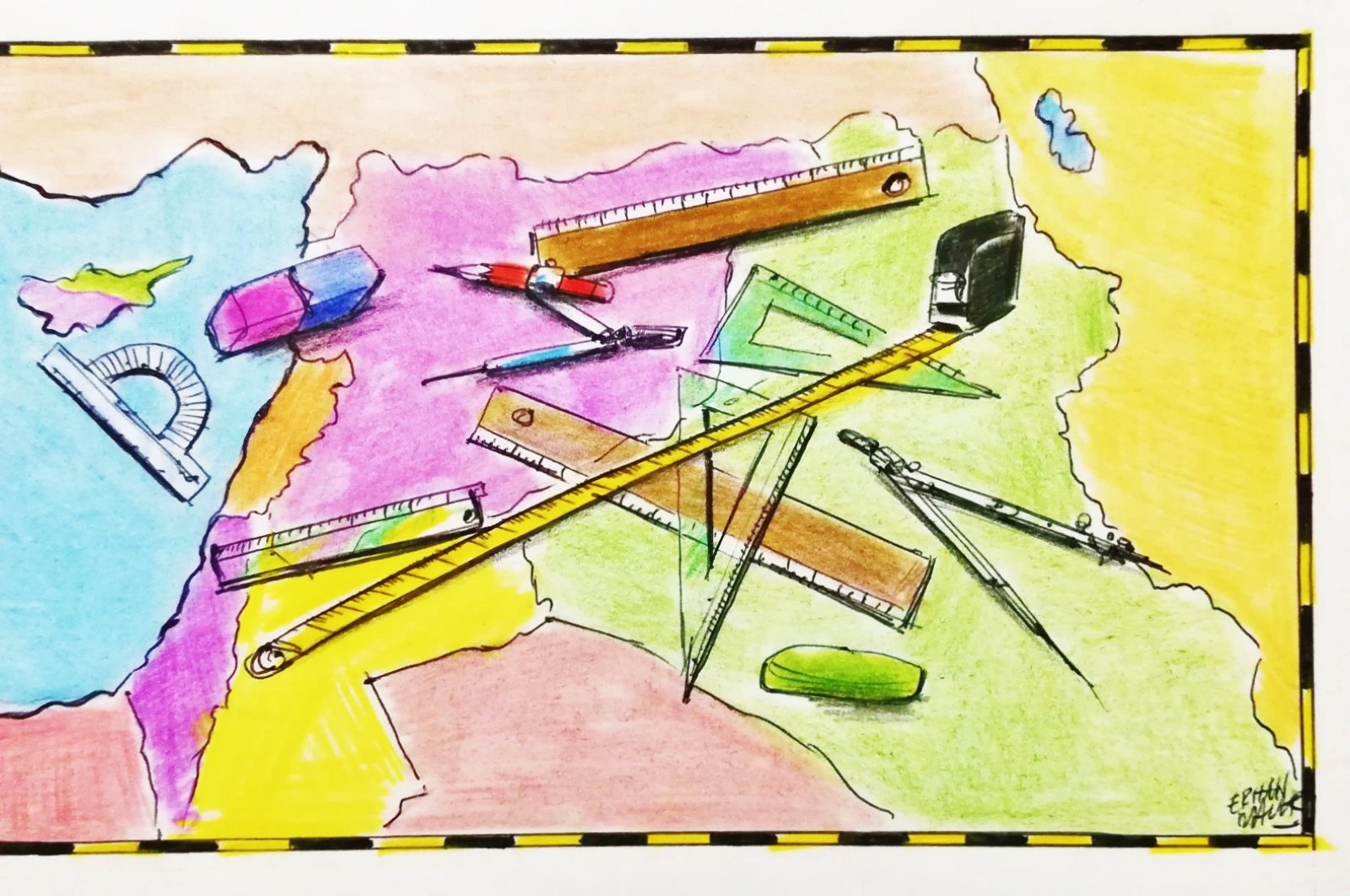 During the COVID-19 crisis, Turkey was able to climb to new international heights in health and wellbeing as Turkey is now a source of COVID-19 Personal Protective Equipment (PPE) and the country to which the U.S., Britain and the rest of the "advanced" world turn to get their PPE supplies and plug their shortages.

The country also advanced politically, as Turkey extended its medical bridges to Europe, the epicenter of the pandemic. Industrially, Turkey’s factories have shown remarkable flexibility in turning their normal product lines into emergency medical production lines to supply the local population with protective medical supplies for free and in record times.

Charitably, Turkey’s privately-owned industrial sector committed its resources to meet the government's need for medical supplies and at low prices. Scientifically, Turkey’s scientific institutes have been cooperating in a joint effort to manufacture a vaccine against the COVID-19 pandemic.

The real significance of these achievements lies in the fact that they come at a time when the world is about to go through two transformative changes that will reshape the cultural and strategic post-World War I and World War II landscape and the role of the regional state within it.

The 20th century in the Middle East (in its Arab and Turkish regions) was a nationalist century that emerged from the rising tide of nationalism that engulfed Europe in the late 19th century and saw the rise of the nation-state. The 21st century, on the other hand, is shaping up to be a societal century as a result of the fall of the nation-state. Societies have been driven (motivated by the fear of losing their cultural values and with no regard to national considerations) to seek refuge in the strong regional state that best reflects their social and cultural identity and can best guard their interests and afford them protection from the various militias that had replaced the authority of the state.

Unlike the 20th century, which was led by intellectual elites who created a strong nationalist culture and ideology, leadership in the 21st century has fallen on civic society institutions seeking salvation and stability beyond national and political borders. The result is a bottom-up run society in which large sectors of the population are ready for change and willing to enter into partnerships with allies who share their values.

This civilizational state adopts a Hybrid National Doctrine combining an internal nationalist discourse with an external cultural message and its concept is rapidly gaining ground in today’s world. Such a state aims to create a regional living space not through conquest, but the establishment of strong cultural and social bonds with the other people of the region. This would serve two purposes: the creation of guaranteed outlets for their enormous economic interests and the establishment of regional political allegiances to protect the national interest in the face of intense international rivalries. In return, other countries in the region benefit from the economic resources of the civilization state and its global status and from being a member of an economic and monetary system that allows smaller countries to be better prepared to face international crises.

China (in the Far East) reinvented and redefine itself as a socialist state with Chinese characteristics. A model in which Leninist values are fused with timeless and borderless (as the Chinese president likes to put it) Confucian values with a cultural influence that extends over the South China Sea and Taiwan. The philosophy of Confucius represents a central element in the new Chinese identity, completely at ease with her natural sphere of influence. The extensive judicial and economic reforms which China made outside its ideological framework took her closer to her regional living space as a safe partner where capital can migrate.

Russia (in Central and North Asia) defines herself as a civilizational state, not of the East nor the West, but Eurasian. This gives legitimacy to Russia’s new influence within the old Soviet Republics and the Caucasus. It is not unreasonable to think that the real reason for China, Russia and even India to choose cultural values as a central factor in their remaking, is to regain their lost imperial influence in an age where geopolitical relationships are not shaped by economic and security concerns alone but are more of a "societal, cultural and civilizational concept," or perhaps simply an attempt to stem the tide of American infiltration.

In the last two decades, Turkey had successfully reinvented itself with an invigorated internal nationalist debate to protect and preserve her home front and a cultural external message in complete harmony with the wider regional society. Turkey had undergone an administrative revolution and surprised the World (during the COVID-19 pandemic) with its abilities to handle crises outside its borders and succeed where major world powers had failed. In addition, Turkey enjoys the advantage that China and Russia never had. The societal upheaval underway within Turkey’s regional backyard is evolving the wider regional society in her direction, turning this cultural integration into a two-way process and not simply a question of an imposed economic exchange.

What China, Russia and others lack, is Turkey’s unique possession, as a candidate civilizational state, of a full and comprehensive written record of five centuries worth of shared existence in all its minute details. We are of course talking about the Ottoman Archives that includes 150 million documents produced by the societies of the region themselves (and is still regarded as the administrative systems and property ownership records.) Turkey’s new relationship with its regional living space is not a theoretical proposition, it is a documented reality.

Turkey’s role in filling the political and security vacuum in Syria, motivated by its legitimate national security concerns, was accompanied by the rebuilding of ruined Syrian towns and the revitalization of civic life, the rule of law and the local economies in these areas. The process is an embodiment of the value of the documented record (Ottoman Archive). Hence, the relationship between the civilizational state and her regional living space in the Middle East may share the same structure with other nations but is fundamentally different. This is supported by the desire of the local populations in the other Arab cities in Syria (and in Iraq where the state has failed) to come under Turkish protection.

Turkey had acquired many of the requisites of a civilizational state by providing a focal point for the peoples of the Arab Middle East in a new way that is different from the pre-1918 era. But, there is an irony here. The 20th century (in its Turkish and Arab halves) was, by all accounts, a century of intellectual vigor in all aspects – ideologically, educationally, and in terms of literature, journalism and the arts. The nation-state was the subject of deeply held thoughts and theories from the late 19th century onwards. When the nation-state arose, its supporting intellectual framework was already in place, even though the nationalist path was a bumpy one because it clearly ran counter to the nature of our regional societies.

Turkey’s involvement in its Arab hinterland and the response of Arab societies (but not the political ruling class) is in essence a fulfillment of the new alignment in the Middle East. However, it is easy to characterize the 21st century (with two decades having passed already) as one devoid (or almost devoid) of the scholarly effort necessary to create the intellectual framework needed to support the concepts of the new era. Such a framework is essential to build a common identity and allow the man in the street to understand what is going on around him and make sense of events. In this way, the individual becomes an asset to society in this new era, instead of being a tinder box ready to be set alight by various players, knowingly or unknowingly.

It is difficult to blame the Arab and Turkish commoners (in the absence of such an intellectual framework) for doubting the value of an Arab-Turkish alliance that may actually cost lives and resources (when the Turkish State keeps reminding the people of Turkey that they are in a phase where sacrifices are needed to defend the national interest). How can such an alliance be explained to the commoners? Without this intellectual framework, any Arab-Turkish alliance would naturally become an easy and inviting target for its antagonists.

Unfortunately, in the early part of the 21st century, scholarly institutions are eclipsed by the giant presence of the media and social networking platforms. Flattery, sensationalism and emotions seem to be more important than scholarship. In this situation, any gains on the ground toward the sought after civilizational state will be quickly undermined and may easily fall in the absence of the strong foundations provided by the necessary intellectual framework.

The shared cultural values between Arabs and Turks represent a safety valve for a sustainable and successful Middle East; one in which all our peoples can enjoy stability and prosperity and can look forward to taking their rightful place among the nations of the World. Without this ideological groundwork, this immensely important central project would remain an easy target for the many likely systematic, organized attacks by its various adversaries.

This central concept for the 21st century needs a joint Arab-Turkish intellectual effort; one in which Turkey would have to shoulder the heaviest load. To gauge the magnitude of the task at hand, it would be good to recall that Turkey’s achievements in the last 18 years to rectify a century of mismanagement are greater and more impressive than China’s 40-year effort to fix 30 years of communist maladministration, yet its experience has a section in every book shop in the world.

Turkey’s cultural mission is easier than China’s and Russia’s undertakings. Theirs is one of a headline looking for a non-existent reality. Turkey, on the other hand, has the right facts on the ground and is simply looking for the right headline.

*Researcher and writer of "Arab-Turk Strategic Relations and Ottoman Studies"