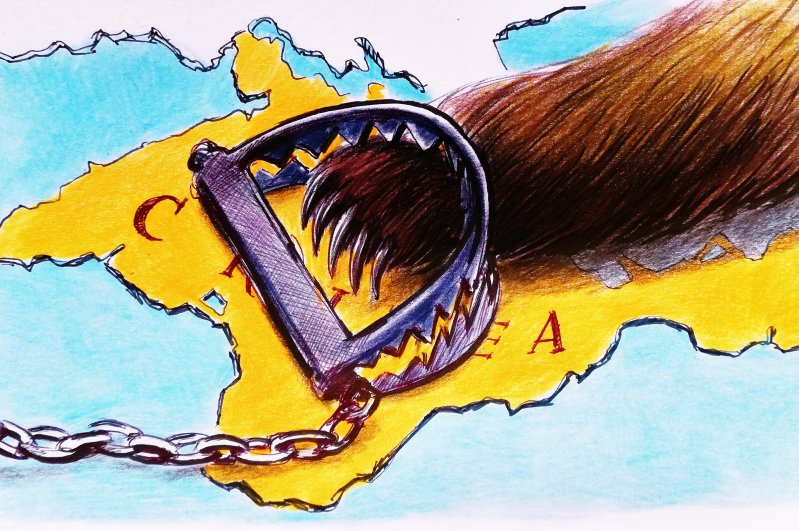 In 2014, Crimea was annexed and pressured by iron-fist policies by the Kremlin. Since then, nothing has changed, and the international community knows it very well

On March 18, Russia celebrates the “Day of Crimea’s Reunification with Russia.” In Crimea, the same day is announced as a public holiday. The Crimean Peninsula was annexed by Russia in 2014, and since then it has been administered as a Russian federal subject. The annexation was followed by a seizure of parts of Ukraine’s Luhansk and Donetsk regions by Moscow-backed rebels who participated in the bloody conflict that erupted in the east of the country which killed more than 13,000 people.

The U.N. General Assembly has approved a resolution condemning Russia’s occupation of Crimea and urged the withdrawal of its military forces “without delay.” But Russian President Vladimir Putin, whose approval ratings soared after Moscow took over Crimea, has repeatedly rejected any prospect of returning the peninsula to Ukraine.

In a documentary film, Putin proclaimed, “There are no circumstances that Russia will abandon Crimea and never will be.” The rating of Putin’s popularity soared in the aftermath of the annexation in 2014. However, according to a survey published by the Centre for Public Opinion (FOM) last year, only 39% of Russians believe the annexation was in their interest compared with 67% in 2014.

Putin’s problem with Crimea began in 2011 when he decided to run for president to replace his close friend and ally Dmitry Medvedev. The rigged swap of powers was then followed by an allegedly staged and tailored election to the Russian assembly with advisory or legislative functions “Duma.” Such fake elections and political manipulations sparked anti-government protests all around the country. The demonstrations continued intermittently for months and the ruling party and Kremlin lived a real state of panic fearing an all-out revolution that might change the political landscape of the whole country.

Eventually, Putin decided to unleash an unprecedented crackdown campaign against the dissent and the protests, bringing an end to massive demonstrations. However, the Russian president has not been able to get rid of his anxieties about future revolutionary acts that his opposition was scheming to embark on. His misgivings were soon switched to a more pressing sense of horror as an authentic revolution broke out in next-door Ukraine.

The people of Ukraine took to the streets chanting for their freedom and dignity. The Ukrainian “Revolution of Dignity” was Putin’s worst nightmare. He lived in a real state of panic that this neighboring revolution would dig his political grave, had it continued and succeeded.

Firstly, Ukraine is connected to Russia through countless cultural and socioeconomic bonds. Most Ukrainians have relatives in Russia. Putin knows that revolutions are contagious and easily transmissible. Therefore, the success of a revolution in Ukraine would constitute a role model and an appeal to the Russians’ aspirations who are unsatisfied with Putin’s monopoly of power and the status quo of their political system.

Sensing the approaching imminent threat, the Russian ruling clique instantaneously embarked on a massive media and political campaign deforming the neighboring revolution and disseminating the narrative of enemies’ interference in domestic policy to weaken the rising power of Russia. The ultimate goal of the campaign was to promote negative sentiments about Ukraine’s revolution. According to some Russian journalists, news coverage of the Ukrainian revolution became dominant on Russian television and other media outlets. They claimed that news bulletins would sometimes have five items on Ukraine, with all events portrayed in the gloomiest and most frightening manner. Interestingly enough, the coverage was juxtaposed with an only lighthearted report about Putin meeting with Russian peasants and farm workers in a cautious and deliberate attempt to affect the audience's subconscious by contrasting the gloomy and uncertain scenarios of Ukraine to the bright and stable status in Russia under the governance of Putin.

Politically, Putin exploited the revolution’s negative perception among Ukraine’s Russian-speaking citizens, who are preoccupied with a historic sense of injustice and contemporary fears. However, there is a host of accumulated evidence that documented the military intervention of the Russian army in the conflict. Most recently, Forensic Architecture, a London-based research group, has collected and cataloged evidence of Russian military involvement in the battle of Ilovayskin in August 2014, including the presence of a model of tank used only by the Russian armed forces at that time.

The evidence includes plentiful satellite images of Russian military convoys inside Ukraine and manifold detections of the T-72B3 Russian tanks. Russia has repeatedly denied military involvement in Ukraine despite tremendous evidence to the contrary.

Historically, the Soviet leadership transferred Crimea from Russia to Ukraine in 1954. Crimea’s population has been lukewarm about Ukraine's independence since the very beginning. Ukraine’s revolution may have been an honest popular rebellion against a corrupt government that was reluctant to more integration with the European Union, but it also had an ultra-nationalist variable. For the normal people of Crimea, this nationalist component was inherently considered an existential threat. Putin put a heavyweight on this card and played with it to help him push the population of Crimea to turn their back to Ukraine and its revolution and embrace Putin as their protector.

Since its annexation, Russia embarked on building up its influence in Crimea by reportedly abusing human rights including arbitrary detentions, arrest and torture against members of the Crimean Tartar community, which is a Muslim-majority community that is largely opposed to the annexation. The Russian authorities have banned the "Mejlis" which is the Crimean Tatars’ elected assembly which resisted Russian rule. Immediately after the annexation, the Russian authorities labeled the Tatar community as "extremists."

Hence, from the Tatar perspective, the annexation was unacceptable, given the unpleasant and acrimonious memories of what they had gone through at the hands of previous Russian rulers. Deep-rooted anger and hatred still overshadow the standpoints of the Crimean Tatar community, making them adamantly insisting on the rejection of being annexed again to the Russian authorities. More importantly, they are highly skeptical of Putin as a president, and therefore they have been collectively resisting and calling for the return of Crimea to Ukraine. Unquestionably, this unequivocal stance of the community has solidified Russia's iron-fist policies against them by closing and banning their media outlets. Russia has also prohibited the use of the Crimean Tatar language and closed down their worship places. These retaliatory measures indicate that Russia is not backing down any time soon. The inactive international community emboldens Russia to go on with its policies. Such a policy may bring good for the Russian president in the short term. But definitely it will cast gloomy shadows in the long term when added to the ongoing brutality of Russia and its proxies in Syrian and Libya.

* Palestinian-Turkish academic, journalist and visiting researcher at Leicester University who holds a Ph.D. from Istanbul Technical University in political campaigning