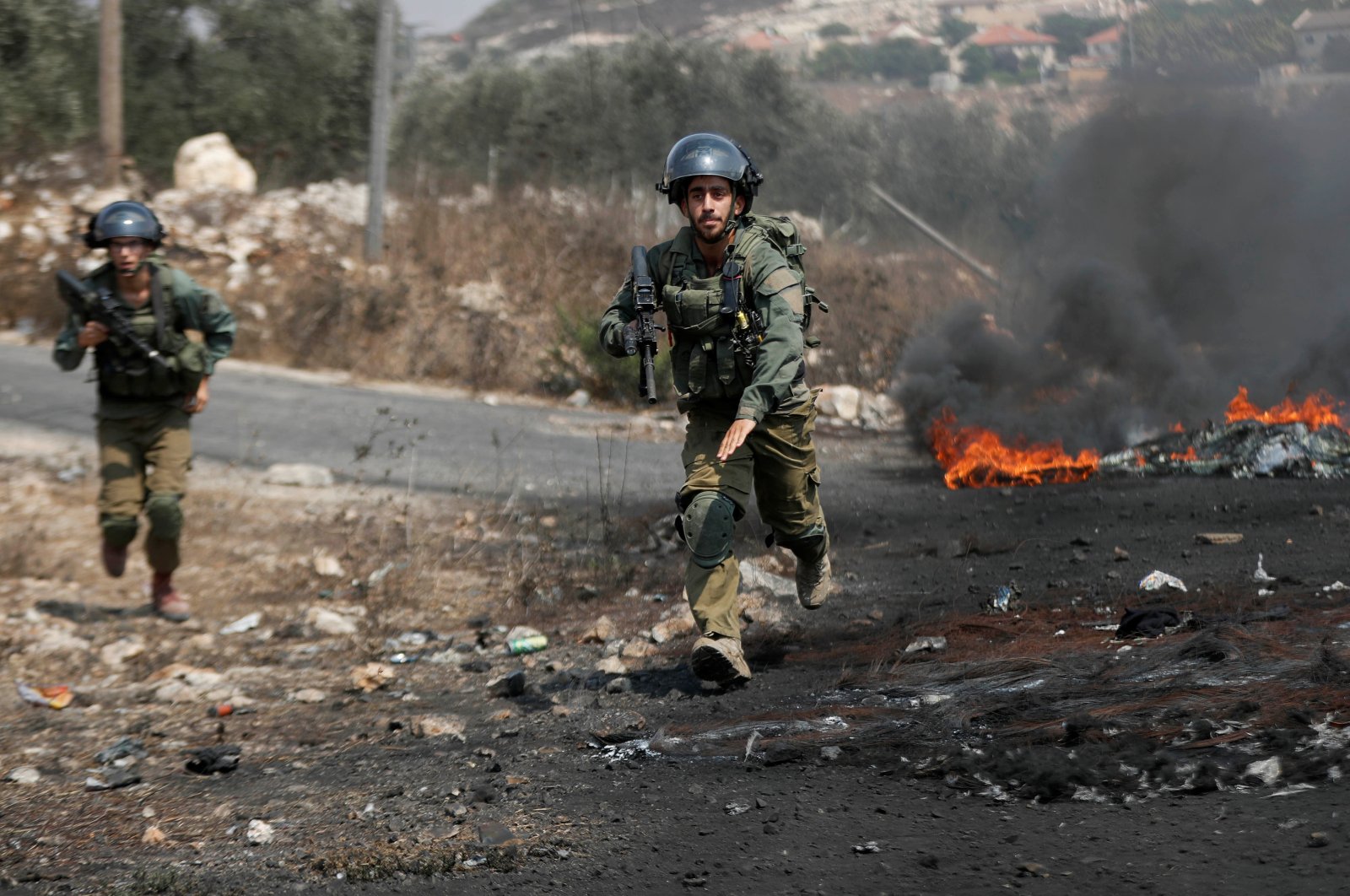 Israeli soldiers run toward demonstrators during a Palestinian protest against Israeli violence, in Kafr Qaddum town in the Israeli-occupied West Bank, Sept.11, 2020. (Reuters Photo)
by Shakir Husain Sep 17, 2020 12:05 am
RECOMMENDED

The process of Palestinian displacement began under British colonialism and continues more than a century on, attracting new quislings willing to betray a cause dear to the Muslim world.

At stake is the Palestinian dream of statehood, despite losing a vast part of their historical land to the father of modern political Zionism Theodor Herzl's Jewish state project.

Also at stake is the right of Islamic communities to reclaim their third holiest city, Jerusalem, while recognizing the city's status as Palestine's future capital.

It has been an old Zionist plan to occupy as much Arab land as possible to render the Palestinians stateless under illegal Israeli occupation or to subject them to other forms of terror.

A genuine regional campaign, in which Egypt and Jordan must play a significant role, can help the Palestinians in achieving their ambitions.

It is clear that Israel and its Zionist allies would not yield an inch to them willingly. Israel's Zionist allies are those who support its racist occupation and policies, including successor states of European colonialism, the United States, and the Arab dictators whose survival depends on Western tutelage.

Even today, Britain is unapologetic for its crimes in Palestine. After British colonialism, the U.S. became the Jewish state's protector and collaborator and continues to subsidize its aggression.

U.S. leaders follow the tradition of their predecessors in manipulating Arabs, chiefly the Saudi kingdom, to serve Israeli interests.

U.S. President Franklin D. Roosevelt in 1945 may have failed in getting Saudi Arabia's founder King Abdulaziz, also known as Ibn Saud, to endorse the Israeli project, but he did win a relationship that serves American and Western interests to this day.

There are unmistakable signs that Saudi Arabia and Israel maintain furtive relations and the next stage will be a formal Israeli presence in Riyadh.

After all, Saudi Arabia has been helping Israel in developing links in the region and beyond.

A strong signal of Saudi Arabia's willingness to accommodate Israeli interests came in 2018 when it allowed the Indian national carrier to use its airspace for Tel Aviv flights.

The original Ibn Saud thinking as Saudi policy became diluted over the decades as Riyadh's dependence on the U.S. grew.

Arab disunity, lack of capacity and political insincerity have bedeviled the Palestinian struggle for statehood.

The late King Abdullah Bin Abdulaziz unveiled what became known as the Arab Peace Initiative, which was endorsed by the Arab League in 2002 at its Beirut meeting, and offered Israel recognition in exchange for withdrawal from occupied Arab lands.

No one takes that proposal seriously, thanks mainly to Saudi Arabia abandoning the Palestinians for political expediency and MBS’s out-of-control ambitions.

The island nation of Bahrain, linked to Saudi Arabia via a 25-kilometer (15.53-mile) causeway, has become another Saudi ally to recognize the Jewish state.

Trump on Sept. 15 hosted a ceremony at the White House where the UAE and Bahrain agreed to normalize relations with Israel.

It means Israel opening embassies on the Arabian Peninsula and Gulf seaports and airports getting linked with Israel. There will be no need for the Israelis to use their dual nationality papers to live or travel in the Gulf for business, leisure or committing an occasional murder.

Those who remember the 2010 assassination of Mahmoud al-Mabhouh, a top commander in the Palestinian resistance movement Hamas, by Israeli agents in Dubai, must be curious as to what an Israeli presence in the Gulf would mean for the wider region's delicate security situation.

Israeli citizens will now be dining and dancing with Gulf Arabs, and indeed with many Muslim residents in the region, even though their own governments still do not recognize Israel.

The UAE and Bahrain are helping Israel expand in a way that has dangerous security implications for many countries.

As for the Palestinians, they can forget about securing an end to Israeli occupation with Arab support.

They will have to admit that the Oslo peace process was a mistake and utter deception and come up with new ways to revive their struggle for an independent state with east Jerusalem as its capital.

The King Abdullah plan was based on U.N. resolutions 242 and 338, calling for Israel's withdrawal from Arab lands occupied since 1967.

The contempt MBZ and MBS hold for the Palestinian people and what the Islamic world considers as sacred is clear in their promotion of the so-called "Deal of the Century" offered in January by the U.S. administration and Trump's son-in-law Jared Kushner.

The UAE-Saudi political yokels, who present themselves as trendy dealmakers, didn't care that the Trump proposal promised the Palestinians not a state but a series of Bantustans in the vein of apartheid-era South Africa. With no contiguous Palestinian territory, no Jerusalem and Israel being gifted huge tracts of land it didn't possess before 1967, the deal was rightly condemned as the "Fraud of the Century."

Palestinians mocked the Trump plan by saying it created two states – but that "both states are Israel."

Those involved in that fraud continue to come up with new tricks to cheat and defeat the Palestinians. What the rulers of Saudi Arabia and the UAE may end up achieving through their deals is Arab enslavement by Israel.

The weakness of their faith is only matched by their meekness to serve Israel, which sees a formal recognition from Riyadh as the bigger prize than Roosevelt securing control of Arabian oil in the 20th century.